As a Stoneforge Mystic target this seems superior to Batterskull in most ways. Lifelink was always a huge stabilizing factor on it but Kaldra Complete is sufficiently threatening that you should be able to power through and race if needed. The issue is whether this is viable as a standalone. Batterskull isn't great without Stoneforge but it is fine in the right deck. It is slow but it gets the job done eventually. This being 7 mana makes it rather less of a thing you can toss into a deck. Especially given how aggressive it is. Stabilizing with this as a seven drop is going to be very hard. This is a sort of super Hazoret. One to test but one that I suspect will be a little out of place. Given that it is likely no kind of fun with Stoneforge I can't see how this is a good thing to put in a cube if the only way it is playable is when you also have the Mystic. 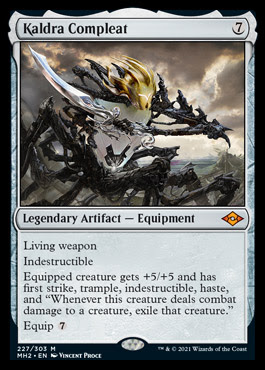 This is powerful but it doesn't seem three colour powerful. It is hard to get value out of Geyadrone. The +1 is a drain and some protection and the -3 is a threaten with the same built in protection. Geyadrone is pretty hard to kill in combat for decks that have a lighter or pricier dork count. You want lots of cheap dorks or spot removal if you care about killing her. Unless she is going ultimate however she isn't very scary. Yes, there is a drain aspect which is a clock and slows down aggression but it is slow and a poor return on the mana. Geyadrone is low tempo, low value, and low urgency as far a commanding an answer as a threat. She just doesn't do useful things like drawing cards, making a board, or answering threats. She is OK at handling opposing walkers sometimes with the threaten but it is rather situational and can be played around fairly easily. I suspect Geyadrone either dies without doing much or gets ignored as you die. The cube just has too many threats from too many angles for Geyadrone to be all that secure. A vehicle or manland gives her fits. Cool design but seemingly not particularly suitable for cube play. 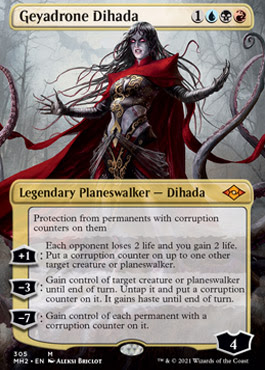 Well this certainly is a fair card in contrast to the Esper ones. The EtB effect has two uses, either turning off some yard cards of the opponents or gaining a load of extra action yourself in a super long grindy game. The latter happens infrequently and the former is situational and rarely all that powerful. Not often will I want to hold up 3 mana or two for one myself to stop your Snapcaster Mage triggering. This is a powerful card but much like Force of Vigor in MH1, this seems to be better suited as a sideboard card against the likes of dedicated yard decks, such as dredge, than it is a general use card. For cube play this is mostly just a 3/4 reach dork with flash. Fine but not good enough. 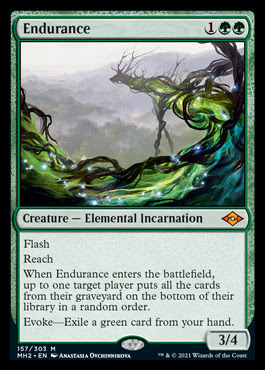 This is a direct upgrade to Wrath of God. I guess technically it is worse in the face of Inquisition of Kozilek but then it is better in the face of Pelakka Caverns. There will be some other nuanced interactions where it doesn't work exactly as a Wrath but it is fair to say that this is Wrath of God with the option of it being a BB spot removal spell instead. It is all very colour intense so not that many deck will be able to use both modes but they didn't need to for this to be a fine card. What this does best is allow midrange decks access to mass removal without being dead. You need access to both of those colours but that isn't impossible even if you are effectively mono black. I would play this over better spot removal in a black deck if I had some reasonable chance of being able to Overload. This is more playable than Supreme Verdict and more powerful than Wrath of God. Hard to go far wrong from that point. I'll play this anywhere I would play a Wrath as well as a bunch of places I wouldn't want, or be able to play the Wrath. 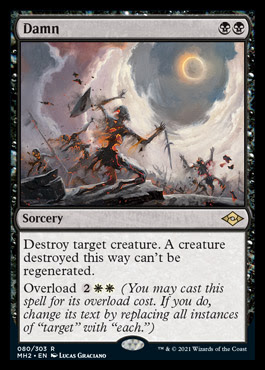 I have no idea what to make of this as we have seen nothing quite like it before. I don't even know if it would be better if it was just a one off deal 5 to a walker for R with cycling for 2. This handles multiple walkers at once, as well as future walkers. It is going to be hard getting more than one activation from a walker with this in play. Pure planeswalker removal cards have not gone down well in cube as there are not enough targets. Most decks have walkers but they are not in play most of the time. This means that most of the time walker removal is dead. It is also inherently bad as walkers get to activate before you can kill them so a clean kill card leaves you behind on value. Cycling on Blitz ensures it is never a dead card and the ongoing removal can make it extra value. The issue is that it kind of rules out your own walkers somewhat. Once this is down your walkers are bad draws. I would play this in a deck with a couple of walkers, like an Immortal Sun, and just use information and control to skew the symmetry. The thing is, I would only want this for the kind of midrange deck that leans hard on walkers and has somewhere in the 4-6 region of them. This all makes me think I just don't want this. Not knowing when the removal will be good, and knowing that even when it is good the card won't be doing all that much. Cycling prevents it being dead but it doesn't stop it being a tempo void when you do which in turn makes it bad if you have to do it at all often. Cycling to find land is one thing but cycling because your card is a blank is another rather weaker thing to be forced into. The upside has to be significant to offset that and I don't see it. When you can pay 3 to deal five to a walker or a creature at instant speed without ever having to consider your own walkers then I am not buying. I think this is more of a sideboard tool and the cycling just disguises that somewhat. This is very powerful and incredibly cheap. It will see play I just don't think draft cube is that place. It may one day be but for now it is more about the dorks. 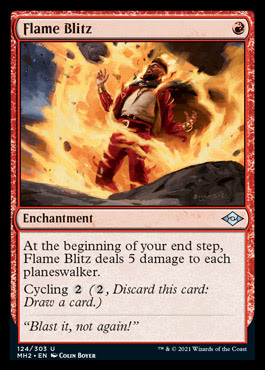 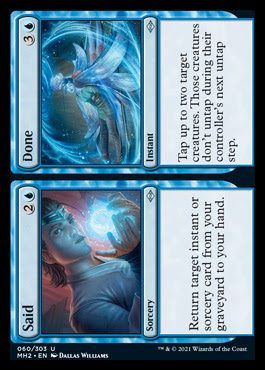 This dude really hates on red and black although likely not as good as Auriok Champion at such things. The stats are better here but the life is generally a very strong counter to the kinds of decks you want protection dorks against. This disrupts more than it protects. Black and red do love yard synergies so this does a lot of work. It is a bad bear against other colours and a trip to no fun land for black and red. Black does have some answers in Edict and Wrath form but red can't do much to shift this. Forcing a block and using a card that stops damage prevention is all red has in my cube. This may well be good enough but it absolutely isn't the kind of card that makes for a good environment. As a constructed sideboard tool then fine but taking up a slot in a draft for such a polar and hateful card, no thanks. The power might well be there but when a card is so evidently not going to play in an enjoyable way then I would give it a miss. A bit of incidental hate on a card that does something else interesting is fine but when it is pure hate as it is here then there is no real redeeming features. 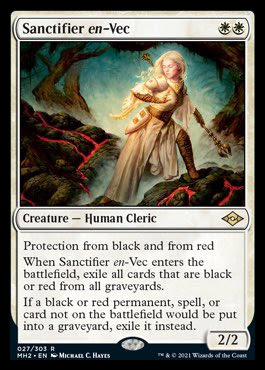 A little push for Soul Sister archetypes in modern. Get back any of the key dorks or at least do something on theme. Too narrow for drafting cubes but getting a look in with constructed lists. 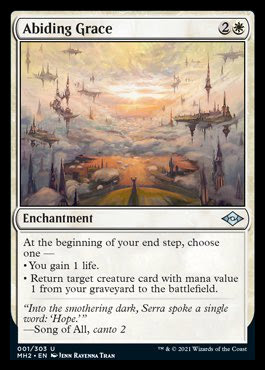 Split second is not what Edict effects need to not suck massively. If this had a clause like a non-token creature must be sacrificed if possible or the classic highest CMC or power or something then I would be interested. As it stands this is just incredibly unreliable and low value spot removal. This might have some sideboard applications but you really need to know that Edict style removal is working for you. 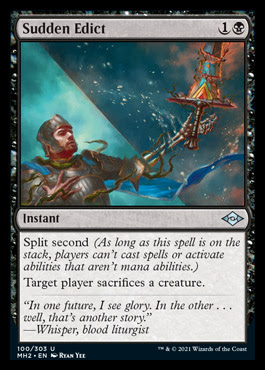 This has some real potential. It is unlimited target range with a very high probably of hard countering something all the way into the mid game for just two mana. It then has the ability to scale up quite nearly into a harder counter if needed. At 1UU it is getting most relevant stuff even into the late game. It is pretty rare that you won't be able to ensure this is a hard counter for almost any card relevant to that point in the game. It might be tricky to stop something two or less mana late but then that is likely not a very threatening card. I certainly think this is better than Miscalculate. This retains it's use as the game progresses while Miscalculate quickly becomes dead and requires you to cycle it away. For me this sits around Condescend and Mana Leak. A little below both I strongly suspect but that is a reasonable power level to be for such a rounded and playable counter. Far from broken but convenient and playable. It is more blue than it looks at first glance. Mana Leak and Condescend are the far more splashable cards. This is to Mana Leak what Thassa's Intervention is to Supreme Will. Worse at floor but still fine with superior ability to scale with extra mana. Given all three of those cards are fine cube cards I feel this can't be worse than OK and could easily be better than that. 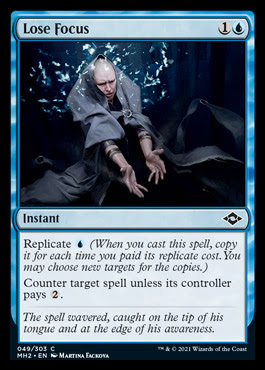