An upgrade to Basking Rootwalla being in a better madness colour and being rather more economical to make threatening. Sure, it is more vulnerable but so what? It was free. I'll take aggression and threat on a card like this over durability of comparable power. I don't have a sufficient quantity of loots in my cube to make this good but I am not that far off. A couple more good red looters and this could start to see some actual draft cube play. As far as madness decks go this is a huge boost. Play this in all them, even if you can't really red! Which you probably should what with red being one of the foremost madness colours. These are the cards that really empower an archetype. 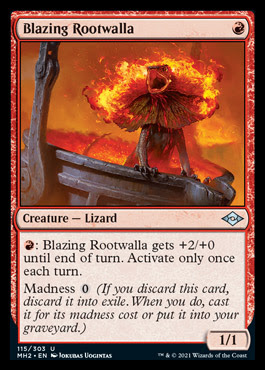 Pretty sure I like Celestial Crusader more as it buffs tokens and can be used as a combat trick. Crusader has not been able to get into the drafting cube for quite some time and so I can be fairly happy not testing this. 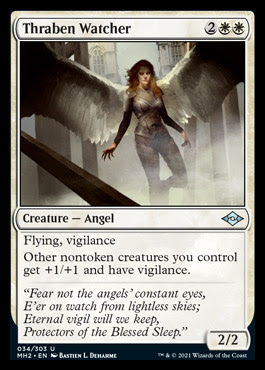 A kind of mass removal with card quality mode. Like a Sweltering Suns but apparently less effective and nearly twice the cost. Granted Fast is rather better than cycling but Furious is so much worse! Fast can be draw two when hellbent which is really the biggest pull to this card. I think you have to play it with Fast being the half you want to cast which makes this very narrow, It also puts it quite a long way down a line of generally better red looting spells. Don't see this getting much action. 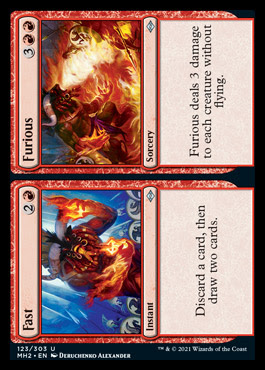 Delightful. Very glad to have this exist. It is like a Faithless Looting, same cost structure and paying card disadvantage for an efficient cheap early perk elsewhere in the game. Cards for mana early? Sounds good. A great way to get setup. This will make red storm options rather better with one or two extra mana on their big turn. Or a couple of cheap storm counts for little to no mana. This can easily generate mana the same turn as you play the halves with enough things like Birgi in play. This has a wide array of uses in both combo and synergy decks. What I cannot say however is if it is good enough for the cube. My rational self is unconvinced but my gut remains unconvinced. I think that is just my bias talking as I like this card a lot! I like the curve of this turn one, three drop on turn two, flash it back on turn three while riding the wave of your three drop and leaving you five potential mana on turn four. Feels like Rabblemaster Glorybring or any tempo or snowball cards would win a lot of games by themselves when ramped by Strike it Rich. 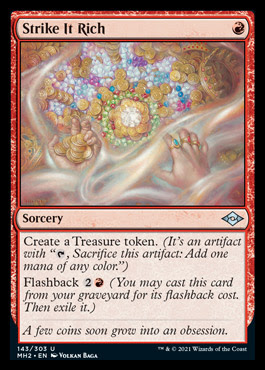 Seems very low power. The best thing about this is two permanents for low cost but with an equip cost of five I'll not struggle to find better options on really anything this might do. 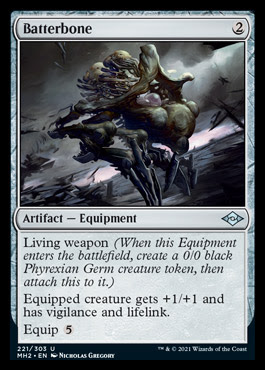 This seems shockingly bad to me. Just asking to get murdered. If you try and use it with counterspells they will just wreck you with a counter of their own or doing the old double spell in a turn trick. If you don't run counters you are probably forcing yourself to play a tap out sort of deck which isn't great. A lot of those decks pack walkers and they generally give you card value which is not what you need when you are locked to one spell a turn. This is overkill when good and a disaster when not. If it were Izzet it might be pretty broken. You might be able to make a hard hitting burn list with it. Seems like a narrow and risky card but there is absolutely power on offer, just incredibly hard to procure. 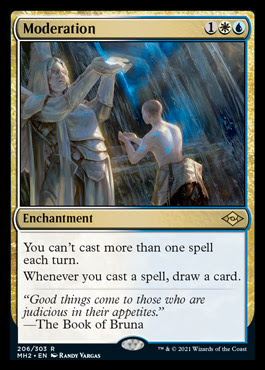 An All that Glitters living weapon. Cranial Plating with legs and backside. Cost is reasonable both to play and re-equip. It is less good than plating being slower and more midrange. Plating is good thanks to evasive dorks much of the time so the germ token adds less than you might hope. I might play this in several places. The power is plenty high but I am not sure it is going to be optimal all that often. Payoff in just vanilla stats is rarely exciting. This will only be good thanks to the evasion of Nexus, Signal Pest, Ornithopter etc. 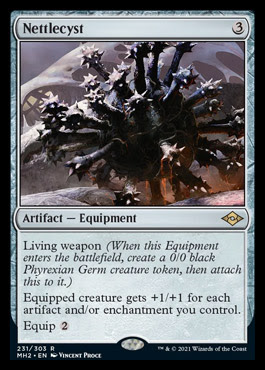 Holy hell this has some scaling potential. Now this card isn't good and you shouldn't both playing or supporting it but you can certainly get a lot of birds for your five mana if you want! 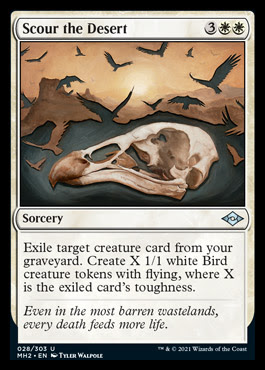 This is no good to play normally. Eight is just too much for the amount of stabilizing this offers. This feels more like a value play than a proper top end threat. Where I like it more is in things like Sneak Attack where you can get two triggers right away. Then you are doing some serious work and I am a lot more interested. Probably a bit narrow and outclassed but some potential. Drain six, Mind Rot, Divinate and Edict twice does start to feel like annihilate levels of power. 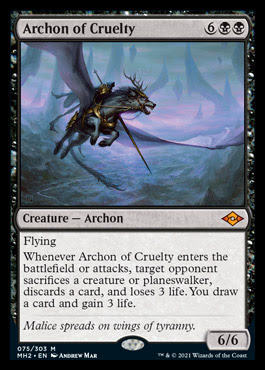 A big Lotus Cobra come Tireless Tracker. This is versatile and generally pretty relevant. It doesn't grow making it less of a threat than Tracker. Generally this is at it's best early while Tireless Tracker gains in power as the game goes on. The option on life or mana as required adds good option density and utility. I class this as a support card though. It is a bit late and fair to be a pure ramp card and it is obviously underpowered as a food producer. I want this if I want to specifically make either of those kinds of tokens or if I want fodder to sac or if I know I am going to be triggering landfall an obscene amount. This is a very cube card but I think it probably just doesn't pack the power when there isn't decent synergy. I will certainly test but I suspect cards with more raw power just edge it out most of the time. 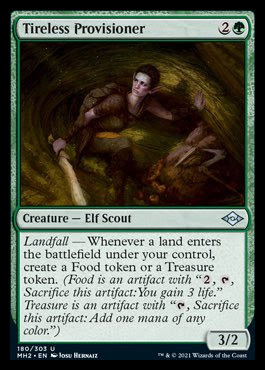 Expensive for a setup tool but deathtouch makes for a relevant body to pair with an easily abused tutor effect. Too slow for most reanimator builds and so really quite the narrow card. We need a midrange iteration but then this probably lacks in power instead. 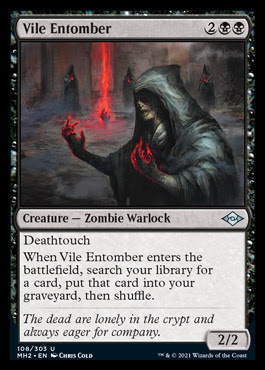 Playable in madness decks but rather clunky. Kind of an enabler but more of a top end threat in practice. Either way, I am pretty much exclusively playing this in madness decks and those that consistently mean I play this for it's madness cost. I am not excited by it either, a lot of this card is just stats. 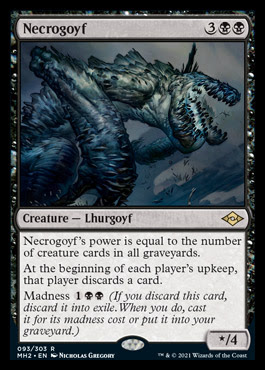 Basically a Gryff's Boon with some minor pros and cons. In drafting cubes this is in competition with Maul of the Skyclaves which is much more punchy and threatening. Boon does more in a longer game offering that extra resilience to answers. Really Boon lacks the power for non-budget cubes but does have a real good shot at aura decks. 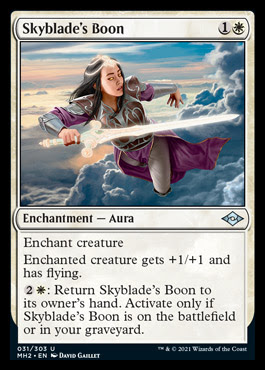