This sits very close to Pia Nalaar in terms of power and general role. Pia doesn't look amazing but she really over performs and is generally a bit underrated as a cube card. They just bring a bit of all the things you want. Some tempo, some value, low risk, a broad spread, and very high option density. Apprentice is a little more powerful but a touch clunkier too. The effects are more significant but more demanding, resulting in a card that likes a bit more support. Pia can use a Chromatic Star and that is cute, Apprentice however relishes having that Star as fuel. Having a total of 3/4 in stats is a nice big tempo play and gives good immediate board presence. This rather offsets the slower coming online of the utility. All told this is a very cube looking card. Very playable and liable to over perform but also pretty fair and generic. 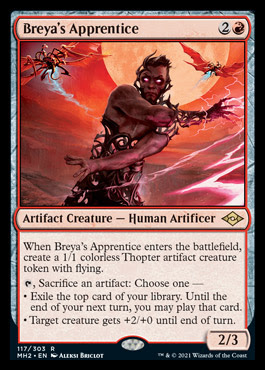 This only gets a 1/10 because of tribal potential. Really this has no hope. It is just a value card where you need a proper threat. The power level here is impressive but it is just the wrong sort of power for the cost of the card. 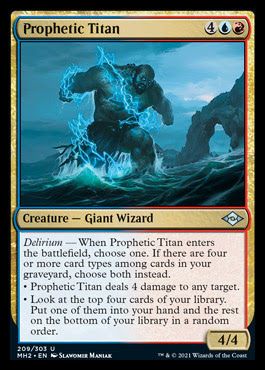 A cute support card that has some minor potential in places looking to discard cards and make dorks. This is a bad Call the Bloodline really. Crabs are a little way off a tribe but if they get there this is probably something they want. 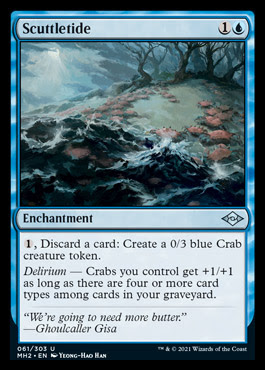 Somewhere between Thalia and Mystic Remora. This is a tax but it isn't disruption as the opponent can always do what they want if they are happy to give away cards. This is one of the very best ways you can get value in white. It feels quite like a Bomat Courier, get in for some nibbly beats and sometimes get some cards while always being annoying! White makes it very easy to scale this up such that you are far more reliably drawing card. White just has a lot of pump effects and wants to play them in decks with cheap dorks. It will be hard to play around this properly. Sometimes you will need to pay the taxes and go slowly and other times you will need to concede card advantage to keep pace on tempo. I do like a nice little skill tester, we see too few at low costs, or in white. I very much like the weighting of this one. I suspect it will win a lot of games but unlike Ragavan it is a well designed and balanced card. 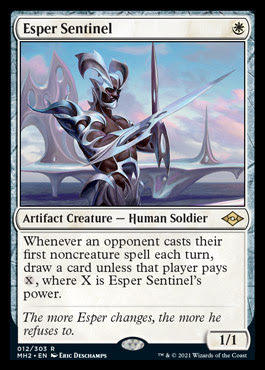 Wow. Poor old Shriekmaw looks embarrassing next to this. Terror? How about Plow? Two to evoke, I like zero better. Sorcery speed? I think I'll go with the flash... This is just an all round fantastic card. Probably the best creature removal spell as far as cube play goes. I am very happy calling this the white Force of Will. It gives them real game and interaction while tapped out. You will always be thinking "do they have it?" when you go to attack down planeswalkers while they are tapped out. Other times you will attack into five open mana and eat a savage two for one while dealing no damage at all. This is good in all the same ways Subtlety is good. It is pure tempo when you need it to be or it is good value. Both halves of the pitch card are good and that has never before been seen. This is also now one of the absolute best white flicker targets. Previously white was a little patchy on such things while tediously having a really strong set of flicker effects. Solitude is a great help with that. As far as removal goes this ticks every box perfectly. It is cheap, it is instant, it has not target restrictions, it exiles, and it has no conditions. It just gets most things dealt with. I will play this in any deck with sufficient white more than happily. I like the design on this member of the cycle most. It is a reactive tool unlike the black iteration and it afford more counterplay and action (EtB effects) than the blue. This is about as powerful as a card can be before it is looking broken and no fun. 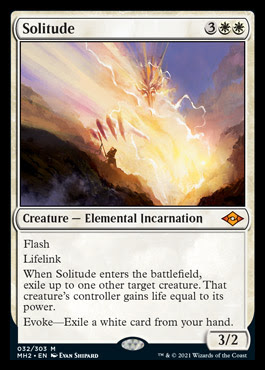 Very clever. This is not as good as the three mana Witness which itself has rather fallen by the wayside of late. The eternalize cost is sufficient that is is only late game. I like this for a discard or graveyard based deck much like a Champion of Wits but not so much for other builds. As a general value card the initial cost makes this underwhelming at best. The tempo is pitiful. I can also see this in Pod decks where being a four drop is actually an advantage but that is pretty narrow. 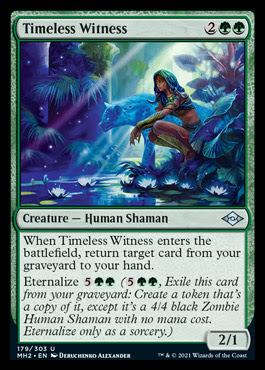 A kind of Dimir Squee. A useful tool to fuel cards that want discards. A better body than Squee too which is substantially more relevant on an easily recurred dork. This is a persistent attacker or relentless blocker with reasonable power. Master certainly has some uses in the places that like a Squee but I think there is a chance it may just be good enough on its own. Like a meld of True-Name Nemesis and The Scarab God. Worth a test for sure. 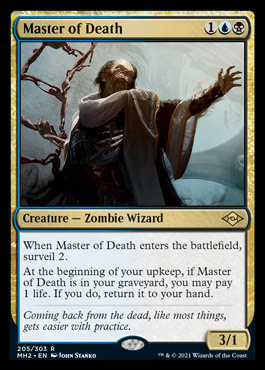 This really doesn't need much in the way of support to be insane. As soon as you consistently have one other enchantment this is absolutely top tier ramp. This is likely a lock in to any green enchantment based decks and it has a real shot at making it in a drafting cube. I only have 31 enchantments in my cube presently but 8 of them are green and most of those are cheap and very playable. More could be added if desired. Weaver probably isn't quite there yet nor worth forcing but a couple more good cheap green enchants and I think it will become so. Not only a lock in for most enchantment based decks but a card that gives those archetypes quite a significant boost. 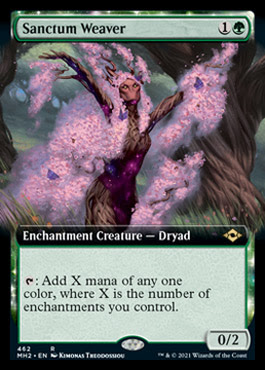 Not overly powerful but cheap and plausibly useful in the right kinds of place. Perhaps some kind of zombie bidding aristocrats list. 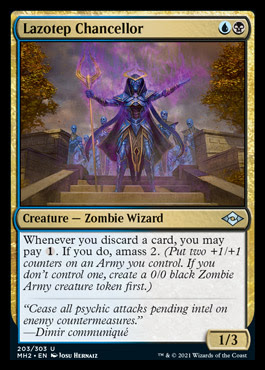 I think I prefer the ability to block to the four man recursion on this meaning I prefer Dusk Legion Zealot. Four is just a stupid amount of mana, you are only using it very late game. There are lands that do a better job of generating value or board presence. Still, a two drop cantrip body is great. Equipment love them, sac outlets love them. Everything seems to love them and so perhaps this just makes it in alongside Zealot and Callous Bloodmage without needing to be better. 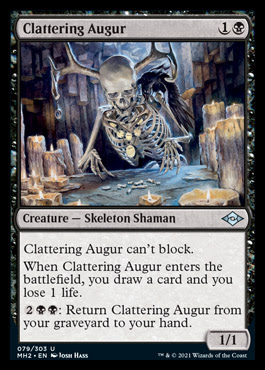