A slightly bigger Reclamation Sage that can be two mana if you forgo the body. I like the options this card presents. The power is relatively low but a two for one answer is always lovely and a cheap mode on a card is a fine thing too. Much as I like this I cannot see it taking the place of a card with more range like a Vivien Reid or an Acidic Slime. There are just too many occasions a card like this does little or nothing. Without things like Survival of the Fittest to get shot of dead cards and the ability to dig up the appropriate ones this is not broad enough for unpowered cubes. I would play it over Rec Sage I think but there are no prizes for being more playable than a card not getting played... In a powered cube this looks much more main deckable and might be a good upgrade to the Sage. 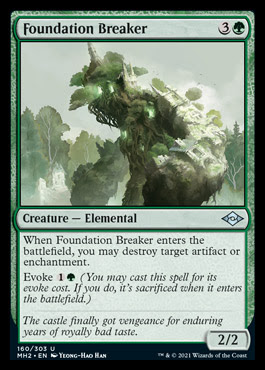 Likely better as a 1/2 modular than as a removal tool. Give me Ication Javelineer over this for disruption every day. As such this only seems playable in affinity style lists that abuse the synergies. In such lists this is likely decent having multiple useful attributes and a reasonable power level all while being a one drop. 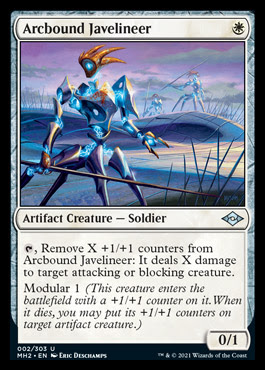 Just not enough meat here. Overall this is a 3/5 with a populate type thing on death. This really needed more stats or more useful in game attributes beyond stats and bodies. 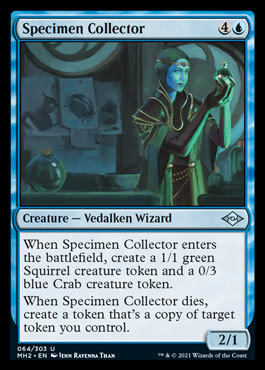 It is a real shame this is not only double red to play but also fails to be an artifact. This is a hard to include card in the sort of deck you want it in. This is a shame because it is a really on theme and useful card for such places. It is removal and utility. Being a sac outlet enables all your modular things nicely and being removal helps make the deck more consistent and threat dense. I would try and include this in Arcbound Ravager style decks but I suspect most would simply fail on mana grounds. 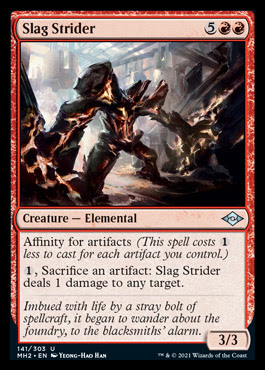 Meaty beater with mild discard support. I might play this in aggressive lists looking to discard but in practice this is not that impressive of a beater nor that effective of a discard outlet either. Sure, he hits hard and fast but that is all he does. He can also be real inconvenient for you. Not a big fan but not without some uses in the more tailored lists. 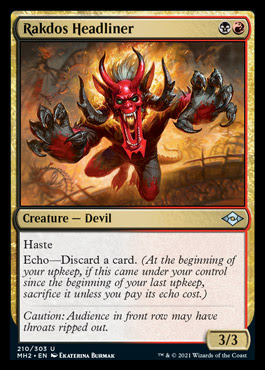 Three spells is very hard unless you build around doing so. Storm decks do it all in one big go and don't want this slow midrange sort of payoff. There is only one or two places a card like this might work out and it is wonky even for those. I suspect this will age better than most as synergies arise helping it to have good homes. 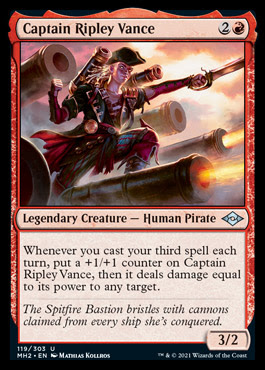 Mox Tantalite looked decent to me but turned out to be highly undesirable. I figured it would be the non-green Search for Tomorrow but it turns out not having the normal cast mode to use it immediately later in the game was a killer. The same feels like it applies here. I can see this getting some love in As Foretold styles of deck and potentially Goblin Welder style decks. There is an outside chance some control decks would employ this like a Temple of the False God and use it to help ramp out some big cards like Emrakul the Promised end or Ugin. I am not holding my breath on this one. Even if it is good in control decks it is likely still too narrow for cube. It is better than Tantalite but I imagine not by enough. Obviously worth a test to be sure. 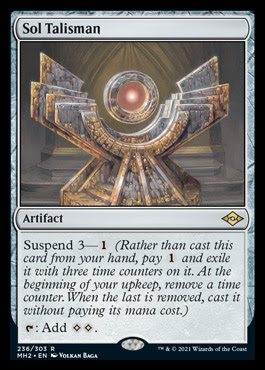 I hate Bribery. Such a polar card. It is everything that I hate about Clones but worse. Sure, it wrecks those people playing super fatties when they fail to get them into play quickly. I hate this even more than Bribery! It is mostly slower and has no surprise factor. This can occasionally be an OK sideboard tool. Where it has most chance however is just as a random mise card in As Foretold and Cascade decks. Bloodbraiding and Shardless Agent into Crashing Footfalls or this is a pretty big tempo and value swing. Cube is a bit too singleton for that kind of low card pool synergy but it is scary stuff for modern. I guess at least most decks have smaller dorks there. This is still a double dislike for me. Suspend makes it super polar and it is already an inherently polar and swingy effect. Luckily at least it is not well suited to my cube with there being little in the way of fatties. 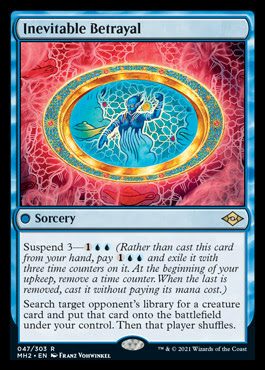 A very potent means to counter targetted discard and burn to the face. Likely cute for shutting down the odd ability and planeswalker effect too. Certainly a polar card but super cheap and efficient. White interaction always welcome even if this does just exist as a sideboard tool. This feels a bit likes Harm's Way. Occassionaly game breaking levels of good but often underwhelming. I will test this but I fear not enough things for it to counter while being worth a card. Life is nice but you still need the disruption to count before this is playable. I like the duration of the hexproof too but it did need to be that way for the rebound to do what you want. 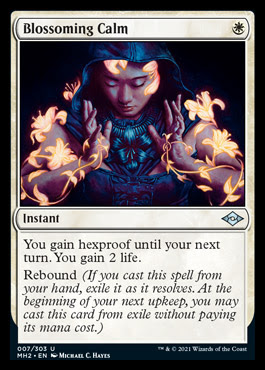 A bit of an Atog for tokens. These are fairly easy to churn out in green and so this may one day be a deck. We probably need another couple of cards that are like this first but when we do this is going to be quite the scary threat. One to keep an eye on for sure. A bit narrow and low power for drafting cubes but loads of build around potential. Pyrokinesis is a fine card. This is better! A lot better. The pitch end is comparable with instant being traded for targetting walkers. That keeps the card fairer and makes it more playable. All cube decks have a good amount of targets for this these days. Being instant would likely make this oppressive as it would disrupt so much. As it stands the pitch cost is mostly useful for gaining early tempo or in emergencies when you need something dead as soon as possible. The pitch cost really just lets you turn a red card in hand into about three mana which is good if you need it. It is the hard cast end where this gets out of control. It pretty much feels like an Inferno Titan or Glorybringer then. It comes down, clears up a load of chaff on the board then starts hitting hard. Doublestrike makes it dangerous in combat with partial first strike and naughty scaling with buffs. At five mana this is tempo, threat, and value. The other cards in this cycle of five are all fine midrange dorks with some utility. This is a scary card that needs answering in some way. It would be playable without the pitch cost, with it the card is a lock in. It isn't a total bomb as it is relatively answerable and not devastating on the value side of things. It is just a high powered, very playable, and incredibly flexible card that does the sort of generic good red things we like in cube. The idea of either curving this after Torbran and dealing 3 damage to each of four things or just pitching it to do that on the same turn is pretty terrifying. Grief is obviously a much better constructed card but I can see this being rather more impressive in cube. 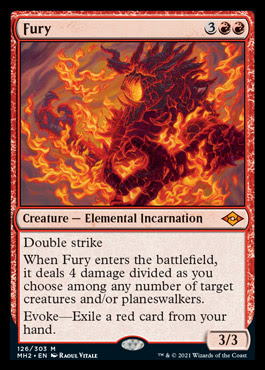