Cute little support card. If you want a mana rock and a body this is pretty interesting. I can see singleton affinity lists considering this for support. A nice body to Plate up, an artifact to empower or sac, and a tool to help fix. Low power but high suitability. Outside of that I am not sure this has much in the way of homes. You either want more power or you want less vulnerability. Signets and Taliman just seem superior to this in almost all settings and what with all the juice affinity lists are looking at getting this probably isn't getting any love any time soon. 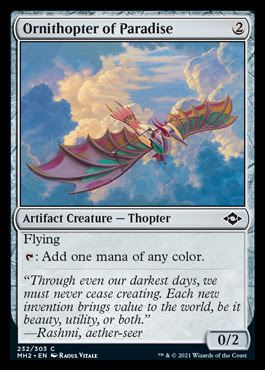 This has a fair amount going for it as a support card but then it would need to with Thrill of Possibility and Cathartic Reunion in the same price bracket and offering card neutral iterations of this effect with other upsides as well. You can use this for card advantage if you manage to fire both halves when hellbent. You can also play this into countermagic with more comfort and safety. The thing I like most about this is the ability to trigger magecraft and prowess twice but sadly that feels pretty minor and not common or significantly impactful enough. This is just too infrequently going to hit the ceiling and is far too fair as far as average power level goes. 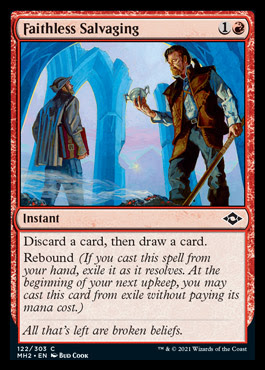 While the self mill potential has some draw over the blue iteration of this card they both share a stark lack of power. 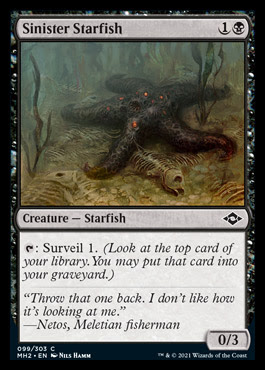 This is a fantastic little card for blue. This is exactly what it wanted for cube. A turn one play that can relevantly effect the board and stall. This card is super low cost both in terms of mana and ultimately in terms of cards too. This sits somewhere in the Thraben Inspector and Wall of Omens range. Likely better than both for most blue decks, largely thanks to being blue! The stats to initial mana investment are the most well suited on Hard Evidence. As far as synergy goes this is a huge win as well. A spell in the bin is great for delving away or flashing back and the card type typically has more synergy in the colour than creature would. Clues are nice too. I hear Urza is blue? I feel like this card probably deserves an 8 as far as playability goes but it is still quite a low powered support card. It is a suitability and convenience win. Being a useful one drop in a singleton format also really helps push the worth of this card. An example of a card where cube will be the best place for it. 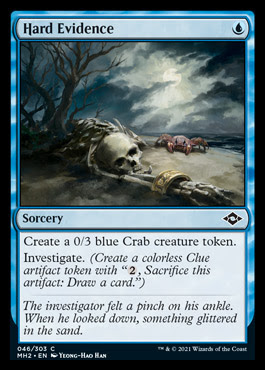 As far as a protection spell goes this is hard to top. It is one mana, targets any kind of thing and gives both hexproof and indestructible. If you want things to live this is going to really help with that. Even a combat trick in some cases! Mostly however this is just not the kind of card that does well in cube as it is too narrow and reactive. You likely need the kind of build around deck you don't see in cube draft for this to be worth playing. Heliod Balista combo perhaps to help force it all past removal. You need a deck where specific things are important enough to merit playing a narrow, often dead, non-threat of a card over something else like another threat. While this is powerful at what it does and nicely broad too I suspect we will not see all that much of this. 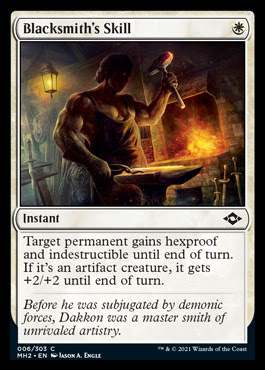 Magus of the Bridge 2

Powerful but narrow and risky. You really want to flop this guy down on a turn you are saccing off a bunch of dorks so as to get a bunch of triggers. If you try and setup with this over a couple of turns then you risky losing him for nothing at all and that is an unplayable floor. Even as is something as simple as a Mogg Fanatic or Tribe Elder facing you down is enough to blank this boy. On top of being triple black and a bit win more this guy has no sensible home in drafting cube. I can see myself building around this guy in the more constructed settings where his power can shine through more. 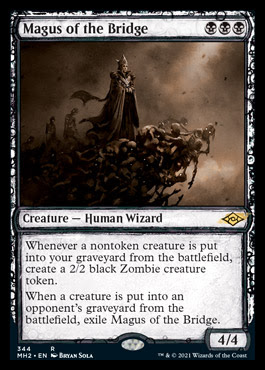 A very big boy. Another way to look at this is as a very bad Pteramander. In draft cube I dislike this strongly. It requires some setup and it is just a big dork. It takes the place of other delve cards or escape cards and dies to most removal. Big isn't all that impressive in cube. Cheap is nice but the setup and opportunity cost of this is sufficient that it lacks most of the usual perks of cheap. I might consider this as a threat in a singleton constructed deck that happens to naturally support it. It is certainly powerful. As you move away from singleton the power of this grows a lot. I expect to see this run in multiple modern lists where the power over Pteramander this has outweigh the opportunity and setup costs. 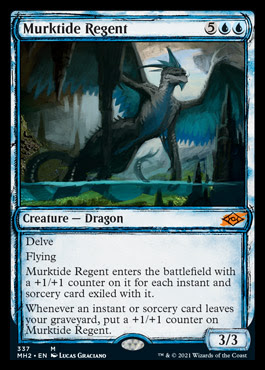 Normally I would simply rule a card like this out for being too slow and vulnerable. Goblins are pretty good at giving haste and do love a token generator. In practice this will look like Krenko a lot of the time (as by the time either Krenko does more than this the game is well won!) while being a bit more aggressive. Goblins is not at all short on playables however and so even though this could be fine in such places I don't expect to see it in 40 card lists, 100 card lists are another story. 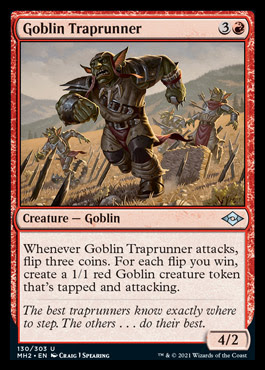 Two quite narrow and distinct effects on one card. Once in a blue moon things this might be useful but mostly just play a good Fog or a good reshuffle. And don't play either outside of specialized constructed builds. 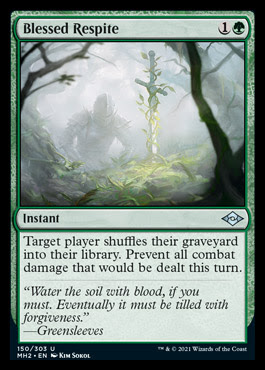 Obviously I love a card with proliferate on it and I doubly like the utility of this allowing you to have a card that does something even if the proliferate doesn't. That being said, this is quiet a clunky combat trick with unimpressive power that I simply can't see getting much action anywhere outside of a counters deck and it is hardly exciting there. I feel like I would just rather have a dork that put on counters or proliferated. 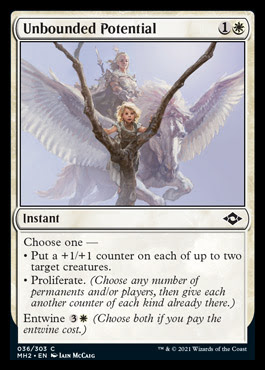 This set is really sticking it to tron eh? This is a well designed and impressively clean land destruction card, and that is hard to do. Too narrow for my drafting cube but a nice sideboard card. 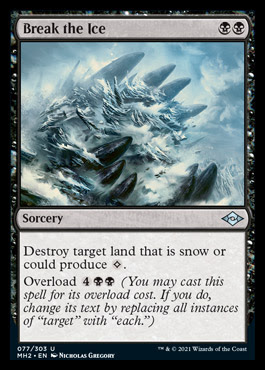 Given that this only triggers once per turn I have no idea why I am even reviewing this. Far too costly and no combo potential. I guess you might elect to Replenish this? Seems bleh. 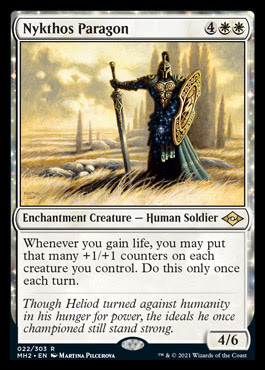 A kind of Tribal Flames come Firebolt. A very bad shock on the front end with a potential Beacon of Creation from the yard. I would play this in five colour decks. It has a bit of a Bonecrusher Giant feel about it. Looting effects improve this too. Only being good when you have access to lots of colours however takes a fair amount away from this and makes it seem just a bit too narrow for drafting cube. Worth a test but not a card I am excited about. 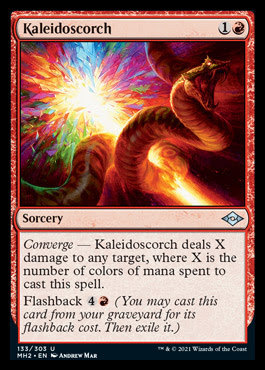 I guess I play this in a coinflip deck. I'll do one of those at some point I suspect. Not close to worth it unless you are triggering the passive externally to the Scoundrel and at a decent frequency. 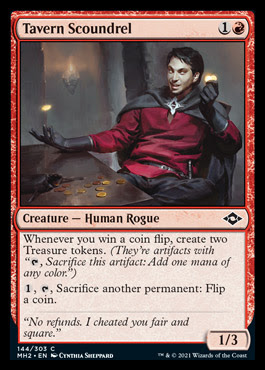 Very cool support card. Useful for any crazy Gruul storm that might exist but also some potential simply as a kind of ramp card. Too narrow and low unsupported average power level for drafting cubes but lots of uses in more constructed settings. 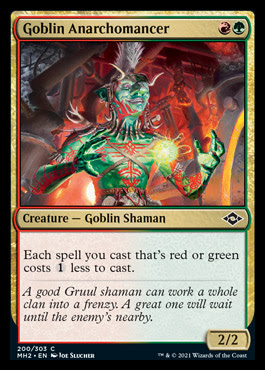