This is just a very bad looter. The cost to use takes away all the convenience and the delirium mode isn't even impressive. 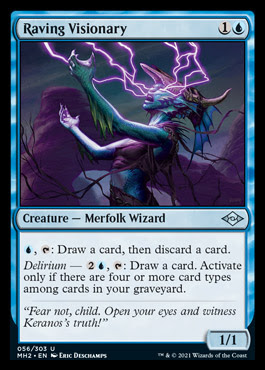 Innocuous at first glance but potentially quite deadly. This is very disruptive to mana bases. A Bear that potentially turns off a land from fixing or utility. Cheap, reasonable tempo and potentially game ending. Not sure I am a big fan, screwing people out of the game is never the best way to win but as far as power goes this seems strong. It might be overly varied and too low power late for cube but I will reluctantly test it. As for merfolk decks, they get a huge boost with this dork, as a high tempo one drop or a means to disrupt or a means to help make all their dorks unblockable. Useful little card. 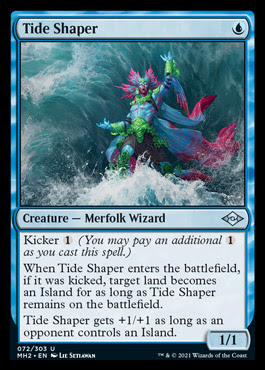 Thoughtcast plus a bit of Wind Drake for value. This is obviously great. It is a three for one rather than a two for one as per Thoughcast. It is tempo rather than not too and most critically, it is an artifact thus not reducing synergies. It is relatively slow as far as affinity cards that you play go but I am sure it is worth it. It is rounded and useful enough that I can see it winding up in other artifact heavy decks as a convenient support card. A Goblin Welder is happy enough with this. It is very hard to be unhappy with this at any point when you have four or more other artifacts in play! Too narrow for all bar the most artifact heavy draft cubes. A near lock in for most artifact base blue decks. 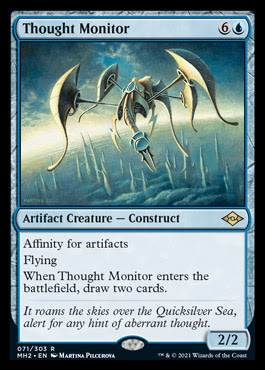 This is low power but it is quite impressive utility and support potential. Two artifacts in one is a strong start. A 2/1 flier is certainly also a relevant card and a passable use of turn two. Ancestor's Blade did OK in cube and this offers more despite seemingly being lower power. Flying and artifact go a long way! I still feel this isn't enough for drafting cubes but it might make it into affinity decks really wishing to power out cards such as Thought Monitor. 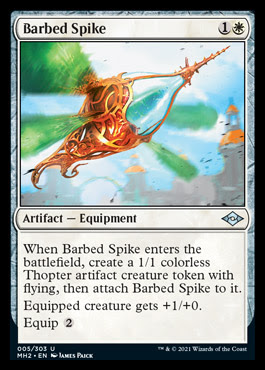 Artifact lands are great. A modular one is a bit of an eye opener. One that also fixes in every way is likely just a lock in. This is likely the one EtB tapped land that affinity decks play. The fixing is not limited to two colours and the modular is highly relevant. Wizards trying to make up for taking away the Opal! I like this and I like clues but it seems pretty bad. It is a tempo void of a card that rewards you by letting you concede yet more tempo. Cards like this want to be Ghostly Prison or Moat. They want to prevent opponents doing things not give them options on giving you perks. And, if they were giving away perks ones that helped against getting beaten up would be better. Don't see myself ever playing this one. 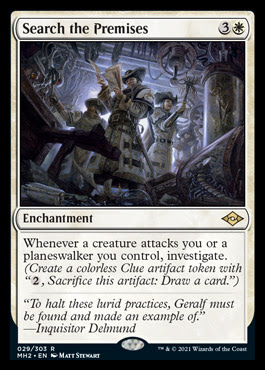 Not quite Argothian Enchantress but this is cheap and powerful and is likely a lock in for most enchantress decks going forwards. Being an enchantment itself is obviously lovely. Sadly we are just pushing out lesser Enchantress cards as there are so many on offer now. While good this isn't anywhere near the boost to the archetypes that the mana dork is. Draw effects are not really what enchantress struggles with! 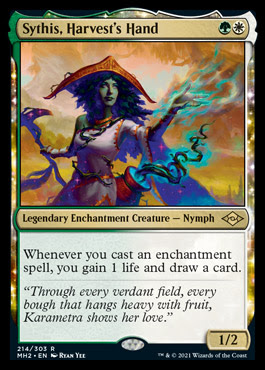 I love a card draw dork and this has loads of perks, card quality, yard filling, good types, flying, and even some potential life. This is a lot more card than a Skyscanner! Sadly it is colour intense making it too narrow. I would probably run the Scanner over it in cube if I wanted such a tool just as it is that much more playable. Chrome Courier is potentially just a bit slow for the kinds of decks where such things inherently look good. Glint Nest Crane and even the Arcanist's Owl are just more appealing. 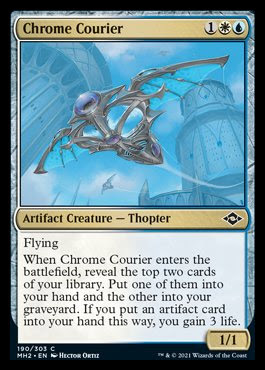 Cute little token generator but too slow for cube. This takes a while to get out of hand and is very low impact prior to that. It is too slow as any sort of sac outlet as well. I might well like this a lot in a Gruul aristocrats EDH list but for cube things are a bit tight for this kind of fun. I'll play this all day in tribal decks of course. 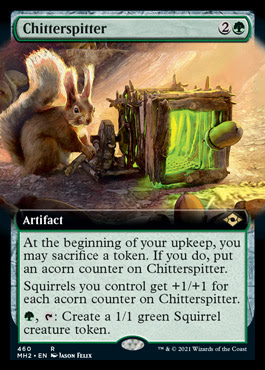 This is a beastly card. Planar Void on legs, and very tidy legs they are. This is a relevant beater and a relevant disruption tool. Voidwalker is basically unblockable which poses a significant threat to walkers and a decent one to players. The ability to play exiled cards for free adds a whole extra dimension of threat to this card. You have to assume black has some hand disruption so if you get caught with a bomb in hand like an Ugin or really anything a bit too hot to handle Voidwalker can really put the fear in you. You will basically have to kill this on sight if you can't beat a card in your own hand. Just the exiling alone is a real ballache. It turns off escape and delve and flashback and on death triggers. A lot of the value and risk mitigation on cards is utterly blown away by Voidwalker. He is decently balanced in that he cannot really block, he is BB to deploy, and he only has two toughness ensuring most removal handles him. Voidwalker will die a lot without doing much and seem less impressive when you play him than he seems when you play against him. He will also win a bunch of games relatively easily. Less than he will die on sight but more than most other two drops and often a lot more directly. A Smuggler's Copter will win a lot of games but this is over several turns with sensible use and for a collection of reasons. Voidwalker will just steal a big bomb and get a huge tempo swing in the process. Anyone who has played much with Kalitas knows how every now and again he just pops down and utterly owns a game by shutting down a bunch of stuff. Voidwalker will have a similar sort of ability to just own a game, and he is half the price! Voidwalker is a very aggressive leaning card but I think it is cheap and threatening enough that I will play it in slower decks pretty happily. Voidwalker feels like a black Thalia, and is quite possibly just better in cube. A mere 8/10 rating might be doing this a disservice. 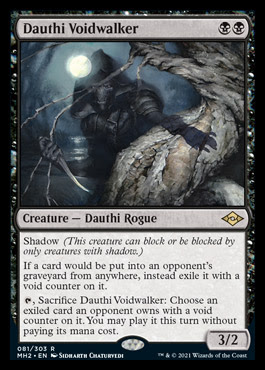 This is fun! Sadly you are getting low value with the cascade in an affinity deck. This is basically just a bad Thought Monitor. It costs two more mana and one more colour while drawing one fewer cards. Yes, it is twice the size but in a deck where Ornithopter is a premium threat size isn't really a big deal. There are perhaps some other uses for this outside of affinity. There may be a bigger artifact deck that uses bigger token producing spells like Myr Battlesphere and artifact land to empower affinity. Sounds pretty poo but this card would at least have more potential in such a place. Hard to rule out a card with affinity and cascade but it is designed suitably sneakily so as to make it pretty poor for more current lists. 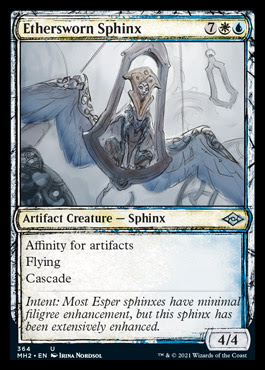 Big fan of this. Very aggressive little dork. The cheaper your cascade card the better they typically are. You know what kinds of thing this hits and can build around that with ease. This is three mana and two cards crammed into two and one respectively. The ceiling is amazing and the floor is passable. There are two downsides to this. Really wanting delirium makes this narrow and it being a two drop that wants delirium on cast makes it unlikely to ever hit it's ceiling. Turn one sac land, Bauble, Tarfire gets it done! Short of free spells or card disadvantage Looting this shouldn't be hitting delirium on turn two, rarely before turn four even in a deck well setup to achieve it. Am I as excited about this if it is only good in the midgame? This is like a higher tempo iteration of Direfleet Daredevil. Sadly I think it is narrower and less powerful. The scaling is weaker and the body less rounded. I feel like this needs to be built around to perform properly. 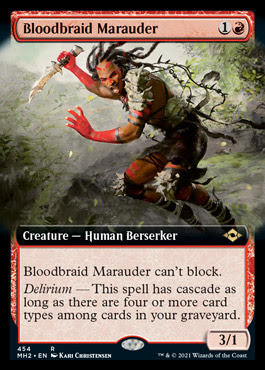