Nice to have a body upgrade on a looter but the added mana cost ruins it for that kind of role. I might play this in a snow deck if I was light on playable low end or really wanted discard support. No chance of wanting this elsewhere. 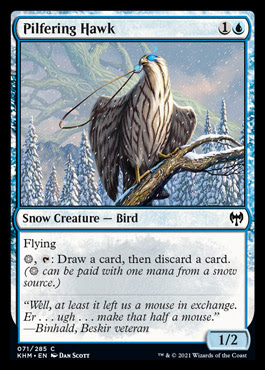 Pillage at instant speed but four mana. Treasure rebate is lovely of course too. Sadly this is just a bit limited in what it deals with to be something you want in draft. It costs too much as well really but it will have places that want it here and there. I like the card and am glad it exists if nothing else! 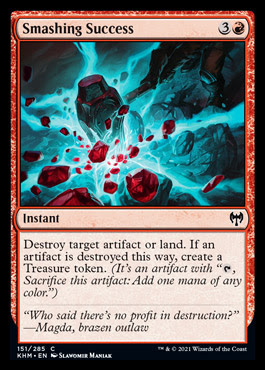 Shepherd of the Cosmos 1

Just a bit pricy to be worth playing. This is mostly just a value card, it isn't much of a threat and doesn't have a huge impact on the game. For the same total cost you could flop a Sun Titan or a Sun's Champion instead and have a lot more power and threat at your disposal. There might be the odd situation this has a bunch of overlapping synergies and you play it but it looks like a very expensive support card. 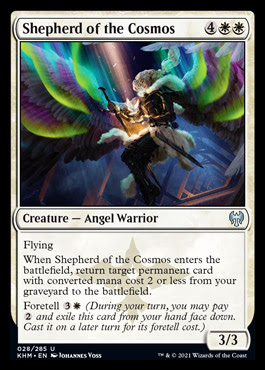 This is a Loam Dryad with reach and upgraded creature types. It works nicely with Magda or inspire creatures. Mostly however it is just a bad mana dork. There feels like there are enough one drop mana dorks in green, even in elves that you don't need this in a 40 card list ever. As such you need this to be providing tap your stuff synergy in a useful way to be something you would play. 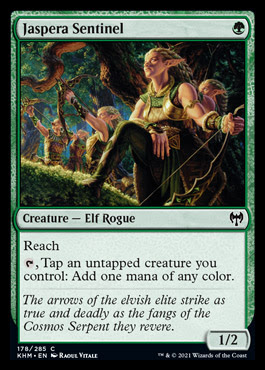 I don't think you can play this in tribal decks. Sure, with the discount the card is great but the problem is that giants cost a lot. You want to say alive by playing things before you get to giants not casting more powerful things if you get there. 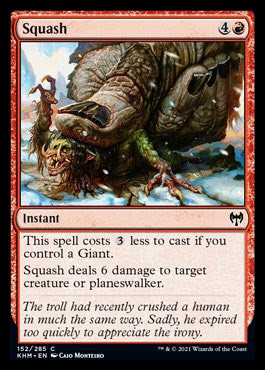 This is not much better than Vodalian Arcanist which I had some hope for but fell rather short. Blue decks after ramp just want to use artifacts for the task for a selection of reasons but mostly just having them not die to creature removal, from either player. If blue decks want blockers they play dorks that draw cards or at least dorks that are good dorks and block well. Coloured mana is a big upgrade but not one that steers this card in the right direction for cube play. I like it a lot. It is a potent support card but it just doesn't have a place in any cube meta I have seen as yet. 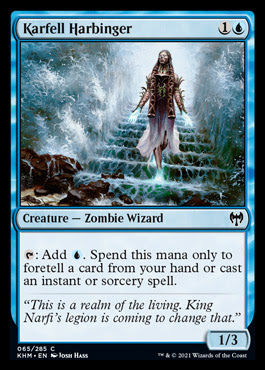 A surprisingly powerful little utility dork but a bit late game. It is just too pricey to use regularly in the early and mid game. Likely something you play to up your snow count in a snow deck but not powerful enough or broadly playable enough to breach many drafting cubes. Blue is at least looking more and more like it has viable support for more tempo decks, not that this is a shoe in for such archetypes, just another option or angle. 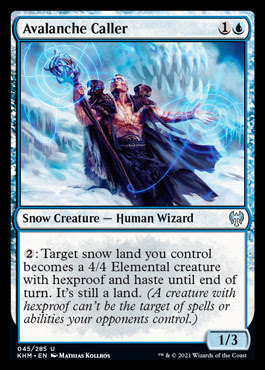 This causes some pause for thought. Seven is expensive and but this is an outstanding stabilizer card which is exactly what blue craves in cube. Cyclonic Rift and Crush of Tentacles get a lot of action in cube and win a lot of games. Not because they are all that powerful but because they are really well suited to handling how a lot of cube games pan out. This is very comparable to Crush of Tentacles. It is more mana but it has other perks. The ability to keep giants and wizards in play is potentially more of a drawback than a perk and mostly wont be all that relevant. A 7/7 card is better than an 8/8 token. Not having to surge to get your body on the board is the main advantage and means that setup is vastly easier. The body is what makes these sorcery speed cards effective. Without surge Crush just resets the board but gives your opponent the first go at redeveloping. Having the big body down means you start out from the reset nicely ahead. Crush however is frequently played on turn four with a Chrome Mox or even just turn six with a random one mana cantrip or Talisman. Cube gets out of hand fast and the difference between a five mana effect to stabilize and a seven mana one is pretty vast. Yes, there are hoops to jump through for the reduction but it isn't really a competition if the alternative is being dead! I don't think there is a place in most cubes for both Crush and Cyclone Summoner. I suspect that Crush will just edge out this overall as neither are high powered cards and so the greater range of potential on Crush lets you engineer better overall performance. Still, well worth testing. A very close to the mark card. 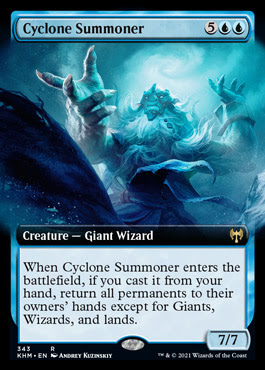 Battle of Frost and Fire 5

This is a lot of things in one card. Off the bat it is a Storm's Wrath which has been a most effective tool for red in cube and impressed a lot. Being gold and a mana more certainly takes a lot away from the card. Wraths really want to be as cheap and efficient as possible. Extra value is no use if the removal comes too late to save you. Assuming you can trigger the final stage once this is scry 3, a loot, and a card draw better than Storm's Wrath which is absolutely a lot more than one mana worth of stuff. Given that it is already on a card that draw is a free card not a replacement so to speak. It is basically Divination, a loot, and scry 3 which is looking pretty comfortably like four mana worth of stuff. This is a very potent card indeed and is very well positioned to support the needs of Izzet control and tempo builds. I suspect it is a little fluffy and narrow to get that much love but the power is absolutely there in spades. I don't love damage based mass removal that doesn't do equivalent damage to CMC but it does matter a bit less the higher up the curve you go, then it is other problems you face for your card... I want this to be good as I love treasure, but this just isn't The cost is too high and the payoff to fair and unreliable. If it was just combat damage to get the treasure then perhaps. If it only cost one to play then for sure. There is a small chance I play this in a deck that wants both treasure and equipment as a nice little support tool. 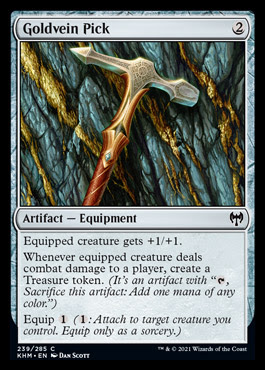 The Bears of Littjara 1

Powerful but slow and easily disrupted. Yes, a 3 mana 4/4 that deals 4 to a walker or a dork is nuts. Having to wait 2 turns on the damage and needing a token to stay alive until then however takes a lot away from this. Yes, you might have other 4+ power dorks, you might even have other shapeshifters you can grow into 4 power dorks scaling up the second age. Ultimately this is just too unreliable for a gold card. Simic is not removal hungry enough to risk this. 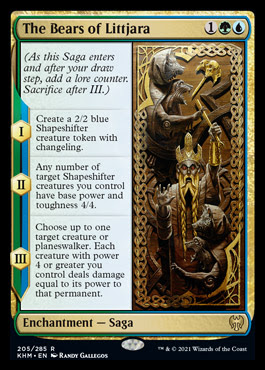 Clearly far too narrow for anything other than a combo and likely a bad janky one. Fun and interesting card that is going to be real tricky to find a use for and trickier still to find one that isn't deeply weak. 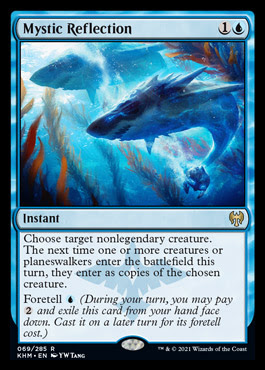 This is like a mini Monastery Mentor, or perhaps a passive Precinct Captain as you are only making a token a turn at most. White is not great at casting multiple things a turn what with having limited ramp or draw effects but it does love cheap cards that churn out dorks. Much as I want this to be good I strongly suspect it just produces far too few tokens to impress. An Orzhov deck or a Azorius deck, even a Boros deck probably support it well enough to make it good but it is the mono white deck that most wants this, once you add in other colours the bar raises and the types of things you are looking for change as well. I'll give this a little test to make sure but I can't see it working out too well. 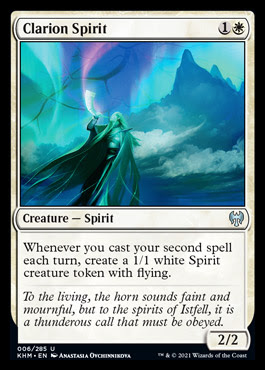