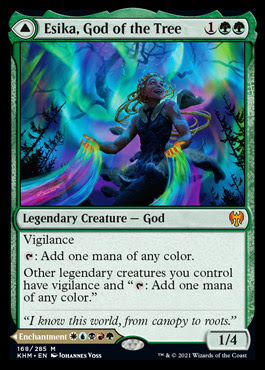 Esika, God of the Tree / The Prismatic Bridge 4

Esika is unimpressive ramp on a relatively useless body. Three mana ramp has to do a lot more than have high toughness and tap for any colour. I want more mana or a relevant body or something. Vigilance and turning my (zero) other legends into BoPs is not what we want at all. The Bridge has some power but it is slow, narrow and a bit random. If you are hitting threatening four drops you are doing great, if you hitting mana dorks you are sad. Overall I think we have too weak of a front end to merit the back end potential given how tough it is to actually cast the thing. Still, Tangled Florahedron is supremely low powered and gets plenty of action for being convenient. This will need some testing. I expect it to suck but The Bridge could randomly steal a lot of games while Esika is able to be at least relevant and playable in the rest. 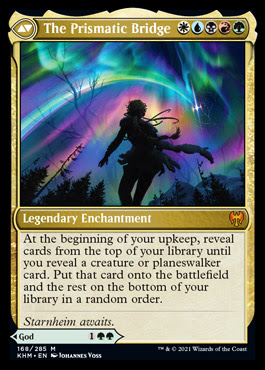 Well this is quite the threat. Countermagic, combat and sorcery speed destroy effects fail against this. Once it has been in play a little while instant destroy effects are off the cards too. Adding 6/6 worth of stats to the board every round of turns also means this will not hang around when it comes to killing people. Koma is resilient, kills fast, and stabilizes pretty well. The only real problem is that Koma is a pain to cast. Green helps make it feel like more of a six drop but still. I don't think we need more inevitability for Simic. Uro and Hydriod Krasis are both generally better cards. This has tonnes of power but I don't think it is worth a slot in most cubes. 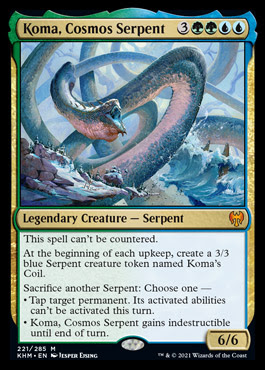 Cool card but little use in most cubes. Fixing at six lands is a bit on the slow side. Beyond that this is mostly a forest that enters tapped. You are never using this to put multiple gods into play and winning as a result. It might find one god now and again but it will lose more games from being a slow land. For some slower cubes this is actually decent fixing, you don't have to run it in green decks after all! Slow and unreliable as a value tool and not overly threatening as far as the body goes. It is reasonable defensively but offensively it is lacking compared to your typical gold cube five drop! A fiddly and low powered card. I wouldn't even play this in tribal... 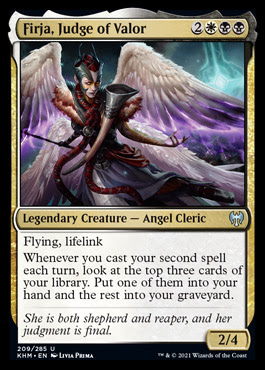 Leonin Scimitar but red and with pings. The pings do make it more powerful but the red cost makes it far narrower. This just doesn't do enough and is still lacking in power. 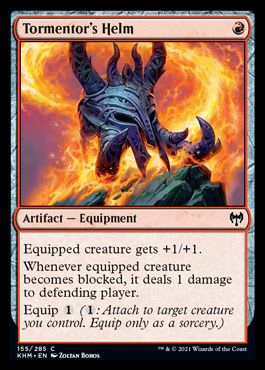 Prey Upon with upsides for having snowcraft. Pretty powerful removal in green although we have seen plenty of fight cards fail to make the cut over the years. I suspect this will just be too conditional and unreliable for what you want in cube even if it is quite a decent card. 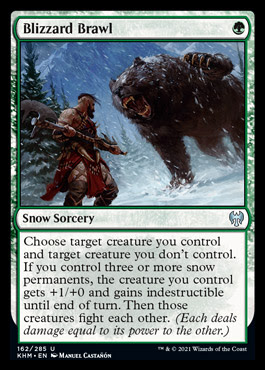 This seems terrible. The first two modes just offer far too irrelevant returns.  It is pretty hard to ruin someone's game with a six mana Stone Rain. It is hard to empower your own with a single land recursion. Sure, a big pile of trolls at the end of it all goes a long way to make up for that but it is just too slow to be workable. Just play Crashing Footfalls! I have still given this a generous 1/10 as it might do some work being flickered or some other synergy to abuse it and land lock people. Probably not though. 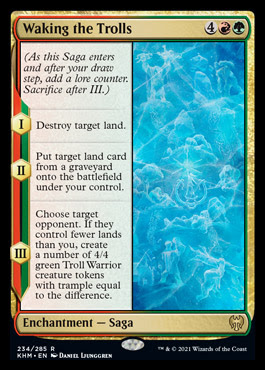 Multiple spells isn't really a white thing nor is it something that cares that much about life. This is far too unreliable for a life themed deck and as such has no homes. Not a very powerful card either even if the foretell makes it pleasantly flexible. 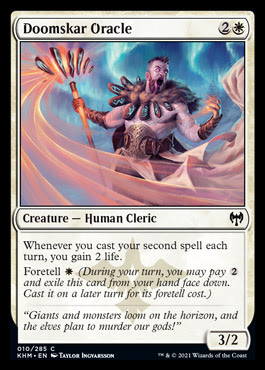 This one has been plaguing me for a little while. Mostly this is an overpriced counterspell and so mostly I think it won't be great but I have this nagging that means I will need to test it. There is just something very appealing about a 2 mana hard counter you can have safe from Duress effects and which you only need a single blue to use. The floor of Cancel isn't shocking and the upside looks interesting even if it isn't obviously all that much. It needs to be better than scry or cycling to even get a look in and it probably isn't. I like it as it is unique more than because it is inherently powerful. It has some interesting choices involved in playing it which I also like. 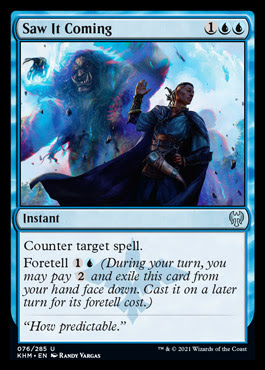 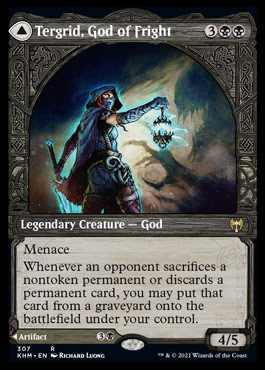 Interesting card but likely all a bit clunky for cube. The body is costly and slow and really needs supporting with things that force sacrifices and discards to be at all exciting. Medium power level high risk cards that need support need to be bombs, or have another card on the back... Tergrid certainly isn't for the former but she does have the latter. I do also quite like her Lantern. It can be pretty brutal against slower decks. It might be a bit rubbish against the fast decks but at least a 4/5 dork is better there. Overall this package is just not in control of what it does enough and is too clunky and slow as well. Fun and interesting stuff but not quite there. 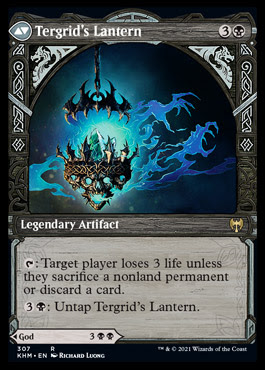 Quite a fun little card with some nice scaling on the go. It could be good with just making 2 dwarves if you get a lot out of the free equips. It could also just be good if you make 3 or more dorks just in terms of stats and bodies. Obviously only a card you can play in decks utterly loaded with the trigger types. Having more than a couple in play is rare even in the build around lists. 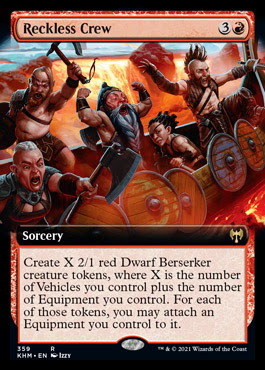 A powerful little tribal anthem that is just a modernized and thus risk free Shared Triumph. Not a card that is going to draft well however and should remain in the realms of constructed magic where it is good, and well tried and tested.