Love the name. We also have our unsubtle best partner for our Giant Ox. I really like this card too, I just like the idea of getting mana in a white deck. I want to use it with Reconnaissance so that I can attack every turn regardless of blockers! Much as I want to play this card it isn't very easy to use effectively. Six to crew is loads. So much that some piddling life and mana isn't much extra help. For this to really perform you need to be attacking early or really abusing aspects of it. Certainly a fine Start your Engines candidate. I do like that this is a very cheap mana investment that allows a very focused attack without risking high value or high cost cards you have. Not that commonly useful but not an effect that is easily found. 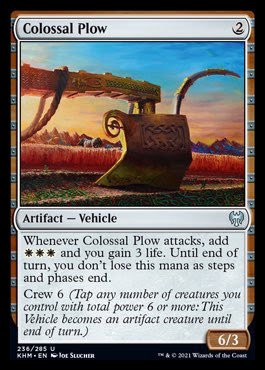 Potent for an uncommon but no Trostani. I am sure there are several more Selesnya top end gold dorks I would run well before this, not to mention mono coloured cards. 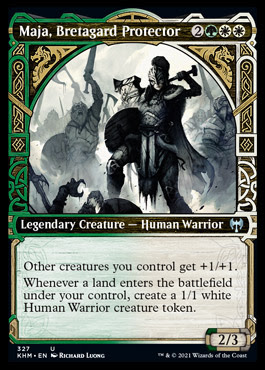 I am loving this daring power creep in one mana white fliers. I think Healer's Hawk is better than this but this is still a lot of card for one mana. It controls the sky impressively and scales very well with buffs. There is increasingly a case for running more buffs and more evasive dorks in place of 2/1 beaters in support of white aggro. If that happens this will be in for sure. For now it has to wait on the sidelines only getting a look in when a white skies deck is built and being thankful for support like Sephara and Rally the Wings making such things remotely common! 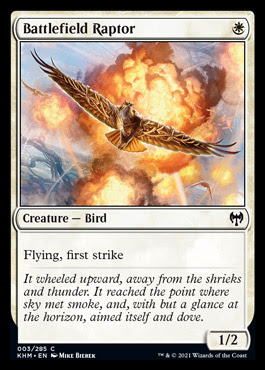 This is a very spicy addition to a snow deck. It is pretty easy to get to 2/3rds of your deck as snow and so this is a very efficient little card draw body. Snow does very well for value, it is more interactive stuff that is missing. Regardless, this has to make every singleton snow deck in blue just for being good and cheap and facing minimal competition. In a normal cube just play Simbad if you want a card like this. A mana to activate on a card that is really only drawing you basics is too low powered. 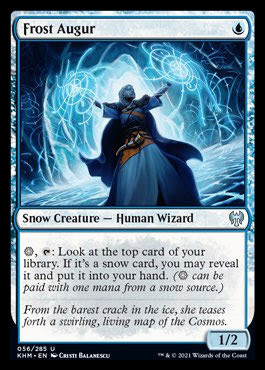 Powerful one sided Patriarch's Bidding or a double tribal Zombify. Expensive and narrow but certainly powerful. It is pretty easy to setup an instant win with cards like this for multiple tribes. A couple of those are even OK at getting to seven mana. I like how foretell protects your big win card against hand disruption here. Mostly this is just too costly for tribal dork decks. It will rarely be played in stead of or alongside Patriarch's Bidding and so EDH is the only place I can see this getting much action. 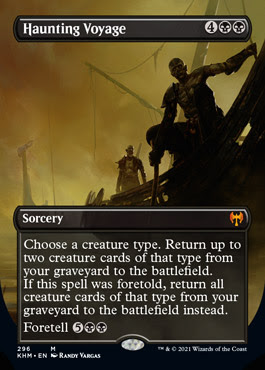 The kind of thing that sometimes winds up in combo lists like Birthing Pod. Not enough card or consistency for much else. Not bad by any means just not at all needed or well suited. We like value in slots one to three. In slots four and above we want threat. 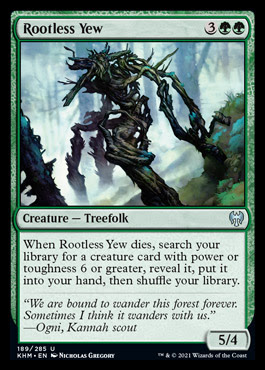 Nice little snow dual. Largely less good than Evolving Wilds but if you are a many coloured snow deck or can't run basics then this might be for you. 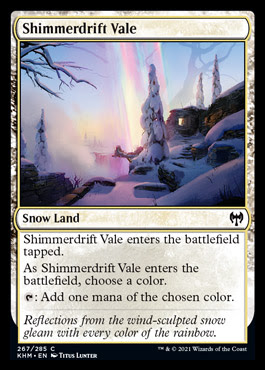 Priest of the Haunted Edge 1

I know I said snow was short on interaction but this isn't quite what I had in mind! This is like a Seal on a wall. It is slow removal but it is versatile and has some scaling. It also has the ability to be killed before it is removal making it dodgy as well as slow. It is pretty deep on the snow plan if your packing this. 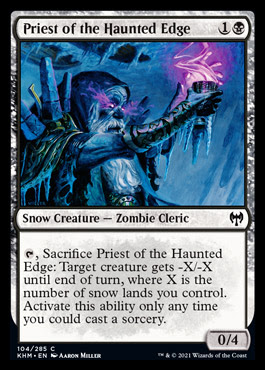 Very comparable to Falkenrath Aristocrat which has been an impressive cube threat for a very long time and is still holding onto its' slot where more other older beaters have long since been power crept out of contention. So will this edge out Aristocrat? Lack of haste says no fairly emphatically. A bit of yard disruption, some toughness, and an easier time of growing bigger are all perks over Aristocrat but they don't add up to haste in a world of planeswalkers. This is a good card but it isn't quite good enough. 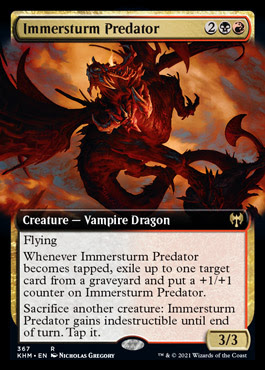 Cute card but a little clunky and unreliable. If it is cards your getting then the cost is OK, if it is two life you are getting ripped off. It is not enough to hold back aggression. This is probably an OK control on control sideboard card but main seems hopeful. Even life decks should have better stuff to be getting on with. 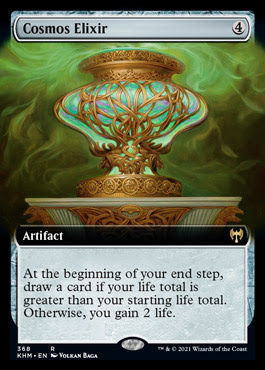 What a cool little card. The value here is decent assuming you trigger the second age. Even if you fail to do so age three can still be game breaking, although much less often in limited settings. Failing age two also probably means your opponent took some poor lines to kill a 1/1 bird. What I like about this is that it fires on every front while being useful. It is a bit of tempo with a touch of life and the birdy then it is the information and card draw followed by the tutor effect once you have your information. Tempo, value, information, card quality/options. Probably due to the third age being so underwhelming in draft and still fairly fair in sealed deck I think this might well not last in cube which is a shame as I am a big fan. I am certainly going to play the arse off it until I can't defend it having a slot any more. 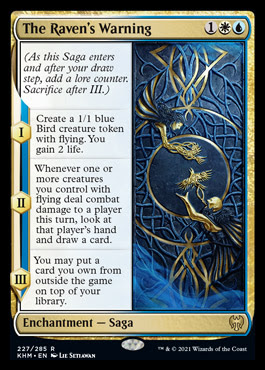 Nearly there but not. Three is just too much mana to have this be relevant. Mostly it will be ignored and it will ping away a bit for one and do nothing. Sometimes you will pay to kill something and you will lose thanks to the tempo setback of having done that. If this was two mana on the boast that would make all the difference. Then we would have a cube card of Firedrinker Satyr levels. Things that pump and things with first strike are a real pain to block and this has both. Being able to react to how blockers are declared just provides such a boost. Three for that pump is just that bit too much, and a little bit off when it comes to marginal one drops is huge. 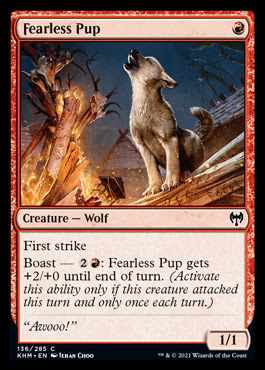 Cool card. Lots of legends in cube but this is a little narrow I think for now. It is just quite a medium buff and thus won't do much late and won't be enough tempo early. Indestructible is a less medium buff but it is very late and needs a lot of time, and a legend, and for it to be relevant, which often in cube, indestructible is not. At least it is instant and as such can protect some gods from some removal. Too small upside to include in cubes where there is a near endless list of good and playable colourless utility lands. 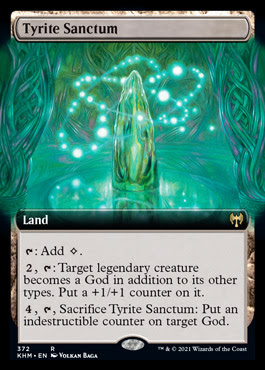