Fascinating card. Oddly the closest thing I can think of to this is Serra Avenger! Mostly because using this early is pretty unplayable. Playing it as the last card so to speak and it is fantastic removal. Curious that there is no planeswalker option which probably kills it for cube. Removal you want to hold onto is fine. We are reasonably used to that with Path to Exile and Assassin's Trophy and Winds of Abandon etc. This is just a more extreme version of those. They all just concede tempo in the form of mana gain. I'll give this a little test as it is very cheap and sill pretty flexible. I think white has enough options on good removal already to not want this. Removal wants to be reliable and this is risky. One to watch though. 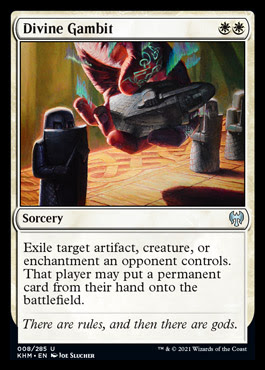 Another rather exotic spell. So this does one of two main things. Either it is trying to cheat out something big for you or it is trying to disrupt a key spell of an opponents. In the latter role it is a bit like Vendillion Clique is to Thoughtsieze with Counterspell. You take away one thing but replace it with another comparable but random thing off the top. The problem with this use is that it is great against situational cards like Wrath of God or Counterspell but it is shocking against redundant decks when you just counter some decent dork and replace it with some other decent dork. This is also just a very Chaos Warp card with hard to control and varied results. Versatile but also restrictively risky. In terms of trying to cheat out your own card the random aspect ensures that you sensibly cannot. Scroll Rack lets you get there but it is sufficiently slow that it will at least be fine in legacy and vintage. Turn three Eldazi in EDH will be rare too what with needing multiple card to arrive from your 100 but still, it is pretty broken. Mostly what you will do with trickery is not cheat something into the biggest thing you can but instead try and just turn a dud card into something. A late Mox just desperate to flop into some walker instead. I like this card. I like the mill aspect too as it adds a bit of synergy and support to those graveyard mechanics when you target yourself. Sadly it is just not an easy to use or reliable card and as such you don't really want it. The average power is pretty low too so you either need to put in lots of work, or get lucky in some way. Cascade trickery might work for modern but singleton doesn't have the redundancy in cascade stuff to pull off that sort of gimmick. 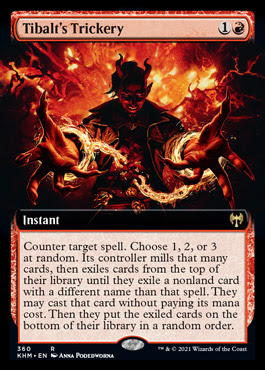 Powerful, a direct upgrade on a Modern Horizons card which is good to see. Sadly this is just not for cube despite being a potent card. It is just too slow and never able to compete with cards like Night's Whisper you can bust out on turn two. 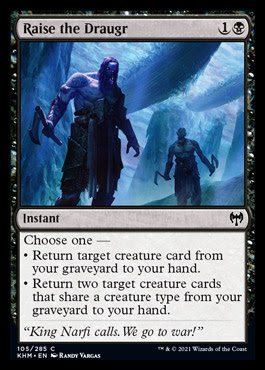 A kind of janky Eldest Reborn. This is quite powerful but it is a little bit fiddly, unreliable, slow and gold. Reborn is cleaner, it is more directly card advantage, it is harder to disrupt, and it doesn't hurt you as well. Vicious Return is a card you don't really want to play in cube even if it can be quite powerful for all the reasons it is worse than The Eldest Reborn. 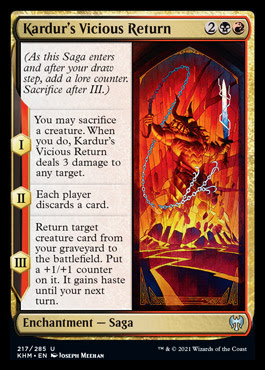 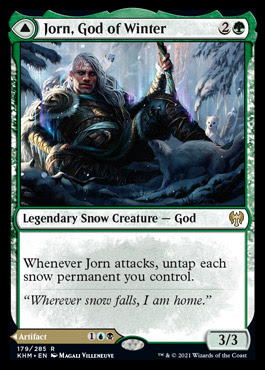 A very potent snow card indeed. Much as this is potent I don't see what I am doing with it in cube drafts. I allow all basics to be snow if you want and as such this is a Dimir Crucible of Worlds for basics or a green 3/3 vigilance for 3 that untaps your basics if he attacks. There are quicker and safer ways to get more mana in green and vastly more potent means of getting value in Dimir. Rarely will both be useful in the same deck outside of snow. Certainly both are powerful, and indeed in a snow deck both are very useful. Without building to support these cards they just don't do enough for you. They need the precise direction of constructed magic to really shine. I can see them having plenty of places outside of snow decks too, just not in limited pools. 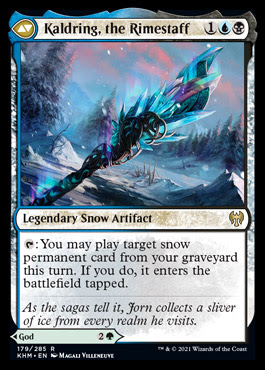 Roots of Wisdom 6.5
This is a good little card not actually at all tied to tribal lists as you might think. Mostly this is a mill card, a Satyr Wayfinder that can't miss but without the body. Grapple with the Past is obviously the closest comparison and remains the better card as it can reliably get you any creature and thus scales nicely into the late game. Instant is always a perk too. This however is potentially better when you only want to mill and thus want to always play this as soon as possible rather than hold to get back key dorks. Roots of Wisdom is also better if you have a low creature count. "Missing" with this is then really good as you have 4 cards in the bin and a nice fresh card in hand. A great little support card. Playable anywhere and actually good with graveyard synergies. I am not sure if the cube is keen for another green self mill card but this is comfortably 3rd in line after Satyr and Grapple so there is a good chance this will make a lot of bigger cubes now and a lot more as inevitable yard synergies continue to see print. 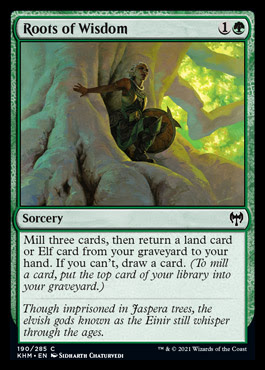 Axgard Cavalry 6
This has some impressive potential for cube play. Goblin Mentor and Bloodlust Inciter are both fringe cube playable. They are let down a bit by most of the sorts of cards you want to give haste to already having haste. Hazoret and her five indestructible power is good to go. Pia and Kiran Nalaar only get a fraction of the benefit of targetted haste gain. With so few cards gaining much from the activated ability they need to be relevant as a body and they fail hard there being 1/1s. Axgard Cavalry is still cheap enough that you can haste up the important big stuff while costing enough to be at least a bit relevant itself. Great for dwarves too as they were heavily lacking in good cheap support cards. A huge boost for that tribe across the board. This is not a bomb by any means nor even very powerful but it is a good utility support card weighted nicely for the task at hand. Mostly it is a victim of the meta ensuring cards that scale best with it such as Eldar Gargaroth are few and far between as they are such risky things to play in a world of Doom Blades. As such this will probably just remain a marginal card and get cut for space in short order despite never being bad or unused. 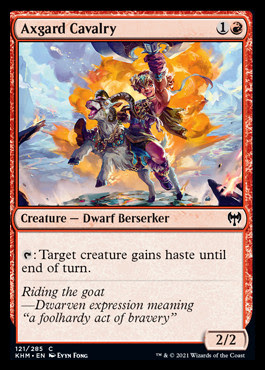 Cool and flavourful removal but a bad card. Giving choices is bad. If life is a problem then fine, you got a sorcery speed removal for two that gave me at least a blocker for that turn or one last activation or something. If life is not a problem then you have made a bad Pacifism. I can still get all the perks of my card, I can still attack with it if I can buff it. I can just block with it. And I have the options on how I want things to go down. The only upsides this card has? Getting round indestructible? Being an aura? Triggering Tergrid? Nope. 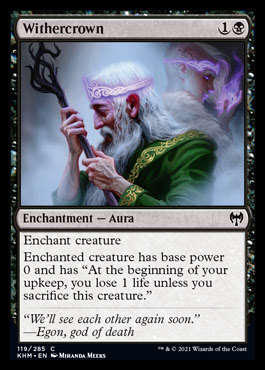 Harald, King of Skemfar 3
This is a solid reason to be considering black for your elves now. There were already a few tempting black things like Shaman of the Pack, Gnarlroot Trapper, and access to disruption. All a bit off brand or unnecessary. Harald is a nice juicy cantrip on elf legs. Tyvar and Warrior probably are irrelevant for the places you play this but finding and Elf from five is pretty juicy. You should have options and it should be better than an average draw even when it is just the single elf hit. It is a lot more powerful than Elvish Visionary although for a lot of tribal decks they will be much of a muchness. Solid tribal card for a solid tribe. Too narrow for drafting cubes of course. 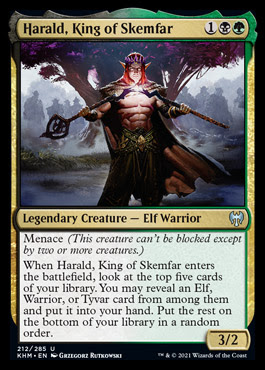