Lovely card with a powerful yet expensive ability and another ability rather less so on both accounts. Feels a bit too slow for ramp decks but this should see you doing well in the late game if you get there. A fine card but not doing enough right away for the costs. 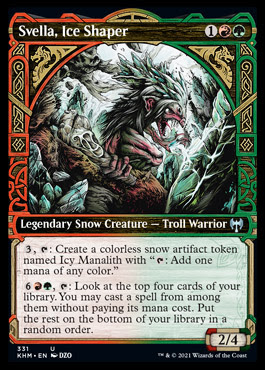 Scry five draw three at instant speed for five mana is pretty real. That is 8 cards deep if you want. It is super Dig Through Time. Even at scry 2 or 3 it is pretty decent. The only thing I have against this is that it is a pure draw spell. You need to eek out the time to use it else it is dead weight. Big draw spells in cube are either really cheap or have other functionality going on which this does neither of. I think I prefer safer draw cards that at the very least cycle or foretell. I want to play this all the time but I can't see myself expecting to have the option to do so very often. It just looks to me like a really win more card for cube these days. Snow decks don't really need value tools much either, that is what it is good at, and this is only a bit better in a snow deck than in normal decks. 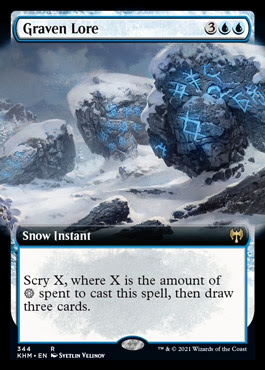 Very Ramunap Ruins. Narrower in that it is two colours and weaker in that it is an aggressive card that is also an EtB tapped land. Aggro decks hate those more than other archetypes. Those issues aside this is very powerful and well suited to task. Having that little bit of extra reach on lands, or indeed just some relevant mana sink is a great thing and Skullcairn is great for that. The damage outlay is significant and not unreasonably costed given that it is a freebee on a land. The discard is just gravy, it will enable the card to be relevant before it is finishing people off and will force some awkward plays just by being an option as the game enters the lattar phase. This is easily the most playable of the cycle and should crop up in most suitable aggro decks. For cube it is still a bit narrow and marginal for inclusion in a draft even if it would be a solid card. 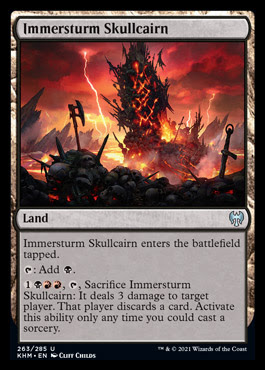 A neat little fix on the poor late game scaling of discard effects. Sadly the cost is too much to entertain playing this but hopefully we will see this on a cheaper Mind Rot soon. 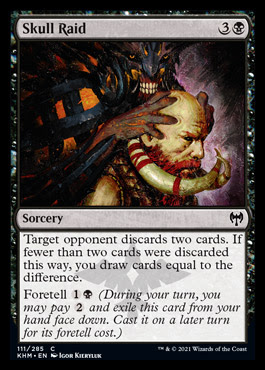 Nice cheap little support card. Too low power and outclassed to see any real play but this is a demon and a very cheap one so I can imagine some tribal uses here. 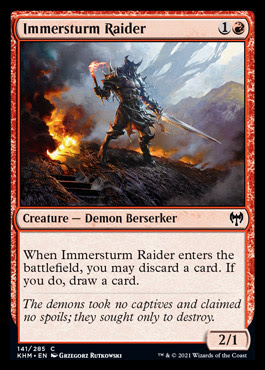 Love it! Not at all sure how good it is but I'll be playing it some regardless. This is not cost reduction but it allows you to split up your costs and deploy expensive cards well ahead of curve at no extra cost overall and some greater convenience. It also helps protect those spells from hand disruption. Hard to say how exciting that is but at least it comes with a somewhat useful body. It does scale but it isn't good in the way that most pumping dorks are as you have to do so at sorcery speed making them known quantities in combat. It also cannot be used repeatedly without cards to foretell from hand. It is just a small wall on defence too and fairly useless on offence if you need to use your mana for things other than foretelling which will be pretty often as relatively few cards have two or more generic mana in their costs. Cool utility dork that does a lot of different stuff but probably doesn't do enough well or usefully to last in cube. 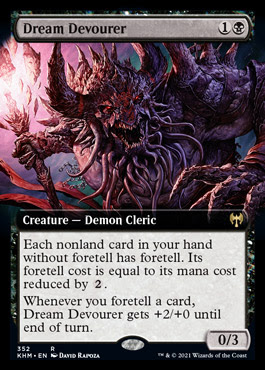 Not reliable early and a bit sorcery speed to scale too well. Ulcerate, Tragic Slip and Disfigure all appeal more than this fairly significantly. 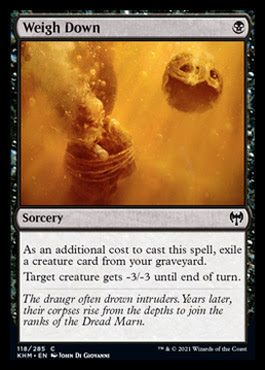 Lovely little value card. Self mill is very useful. Getting two things back is great and should be happening most of the time. It makes this a two mana draw two with upsides (and some downsides but generally more up) which is great. It is however only playable in snow decks, ideally ones with two thirds snow cards or more. It is a non-snow card too weakening some other aspects of the archetype or taking up valuable slots that could be going to disruption. The one thing snow decks do well is value so this, while good, isn't adding much. 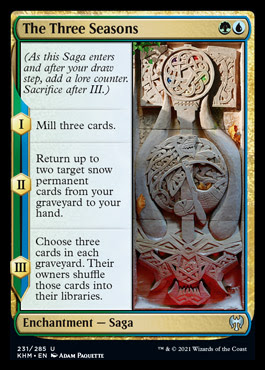 Fascinating card. Harnfel is simply a nice end game value card. It is quite like an Outpost Siege or really any of the expensive red permanents that offer one extra free card per turn. Harnfel is pricier than most but does have some upsides. It digs pretty deep, it can be used the turn you make it, it helps fuel your graveyard. You can even use it to find cards to play in the opponents turn. It loves it when you have stockpiled some dead cards in hand as you are otherwise a little locked into discarding what you draw regardless and hoping the two hits you get are more value overall. I wouldn't run Harnfel as a stand alone card as there are slightly better alternatives already doing good work in cube. Having it on the back of another card is a great place for it to be and will make the whole card better and more desirable. Harnfel will be played plenty and do good work when it is. It is one of those cards that is a very desirable effect some of the time and so being modal makes it scale rather well. 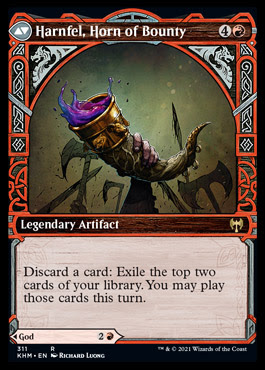 Birgi is a funny one. Part Trained Armodon and part Runaway Steam-Kin. The double boast ability it cool but will barely ever be relevant. It is all about the body and the mana. The mana is powerful but comes late enough and on a sufficiently easy to remove card that it is hard to be playing this just as a ramp tool. Red based storm decks will likely play it but I am less convinced as to whether other kinds of storm deck will want it. Midrange and perhaps even control red decks might be interested in it but it doesn't seem like enough of a threat to fully tempt aggressive ones which is a shame as they are best positioned to make good use of the whole card. Body, mana, and backside Horn! Midrange seems like the most well suited overall. Bonus mana is amazing but on a vulnerable three mana durdle dork it is a slightly less appealing prospect. I feel like Birgi winds up not doing enough on its own too often to be a card that would last long in cube without the Horn on the back. The broadly useful Horn however really rounds out this package with a proactive mana card or a late game value card and makes me think this will last in cube. It will do interesting things and be situationally powerful fairly often if not directly powerful all the time. 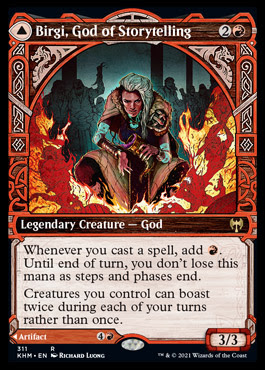 Snow and blue makes this narrow. Not hitting lands makes it not the power house Icy Manipulator has been in the past. This card has some uses, mostly bolstering creature defences in snow decks otherwise lacking in that department. Far too fair and narrow for drafting cubes. Might have a couple of places that it gets constructed attention outside of snow builds but all told I think I prefer Tumble Magnet. 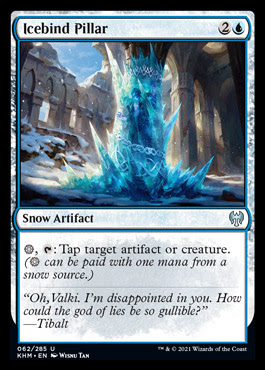