An impressively broad tutor for white. Legends gets a lot, sagas gets a bit as does snow. Search can get lands which is a pretty relevant deal. Life potential is also a small win and offsets the low low tempo of Search for Glory. I think this is too slow and narrow for draft but I can see this having a wide array of homes. Pretty big card for EDH too. 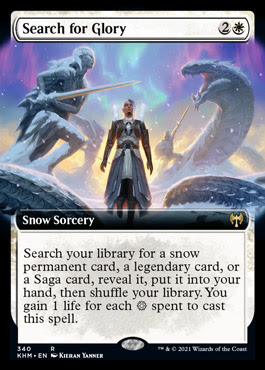 Not enough other things to get back in cube for this to shine. It is of mild interest in aura decks but they probably don't need this as they get value on casting stuff and don't need to have slower tools like this. Quite a powerful card compared to most auras though, better than it looks I would say. There might just be a tipping point where buffs like this are plentiful enough and good enough that you can run it in a cube. 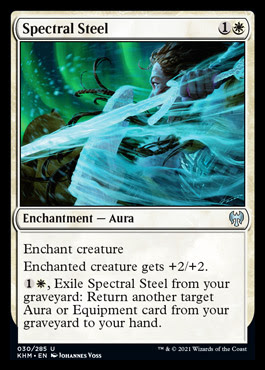 What a lovely little card. Another one that I have been puzzling over for a little while. I think it is good but I am not entirely sure if it is cube good yet. A pair of 2/2 tokens at four mana is sub par but not by a lot. At least not in other colours, I think in green it is generally a little less exciting. It is very likely however to be rather more than that. They need to kill all the tokens you have before you can crew the Chariot or you are getting at least one free be, more depending on how you value the Chariot and if it lives. Four mana for 6/6 in stats over 3 bodies plus a trade with say, a pair of 2/2 dorks is starting to look impressive. The Chariot is both a bit of a threat but it is also fairly disposable which puts it in a really nice place I think. Overall it reminds me a bit of Mitotic Slime, jsut a 4/4 that dies into some 2/2 tokens. Esika's Chariot is fairly flexible in how you use it and fairly difficult to answer once in play. I would not be at all surprised to see this do well in cube. Not supremely powerful but the right kind of options and spread. 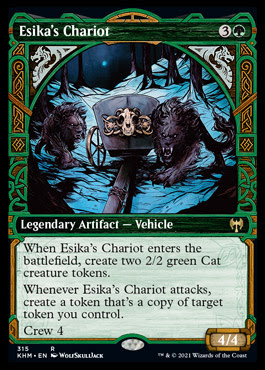 Doubly narrow being gold and needing things to trigger it. Can't imagine I am that excited to play this even in a foretell deck. The support is there for it in cube but it is a bit thin. You do only need to hit once with this for it to be good, twice and it is great. Still, all a bit wishful when you can play a nice clean card like Cloudkin Seer and not have to worry about support. 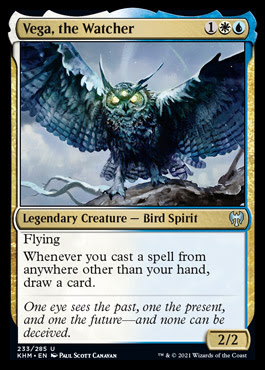 This is another very pushed giants matter card. The body is pretty whatever even with the foretell. It is mostly just an overpriced Sulfuric Vortex that is easy to kill! What does look exciting is the ability to do something like Buried Alive or Faithless Looting or Intuition to fill up a graveyard with them and get a pile of free triggers with a cheap changeling or Bonecrusher Giant or something. All in the realms of constructed (although I seem to have named three examples of cards not legal in modern and this is going to be too slow for legacy). For draft this just doesn't compete with things like Glorybringer or even Siege-Gang Commander. They tangle much better in combat and do much more immediately or in the face of removal. That is what you want from top end dorks in limited cube. This might even struggle in a tribal deck as giants isn't lacking in top end cards. Oh how it tempts. How it tempts with so so little chance of delivering. Sure, you could force it with proliferate and timewalk effects but you can abuse those substantially more powerfully than this this card. Don't play this. Play a better ramp card that costs two mana. Or, if you really must, play Skyclave Relic. The best thing about this is that it is snow and yet there are still multiple better ramp cards that are also snow, all be it mostly green ones. 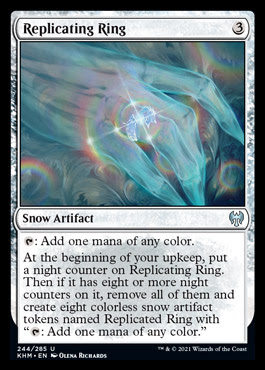 A cute two for one that has some tutor applications and some mild scaling. I would play this in a snow deck. I might well play it in a Dark Depth's deck. I am not playing it over any 2 or 3 mana dork that finds a land in some way in cube draft. The card is decent enough but it is just a value tool in the four slot which is not where you want them. 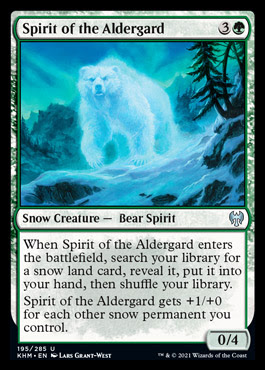 This is a different take on Blossoming Defence and I think I like it more. It is still a combat trick even if it is a less potent one. It is also however just better at it's other role fairly significantly. If you are countering an effect on a dork then that dork lives but it lives on bigger and better. Plenty of nice scaling potential here. The only real question here is if a cube supports this and Blossoming Defence and only really some good testing will bear that out. If just the one then my money is on this being the preferred choice. 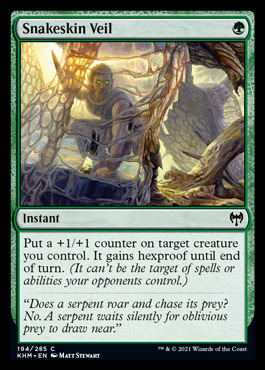 Smells a bit like bad Rankle. This is just too much mana for my liking for too little in the way of immediate returns. The lifelink ups the threat a lot but doesn't help solve the issue of this not doing all that much right away and being a bit of a sitting duck to removal. Sure, it has mild resilience to planeswalker answers but handling a 3 toughness dork isn't the trickiest thing you have to do in cube. A powerful card but not up to cube requirements to perform consistently and well. I will test this as I like the sound of hexproof from planeswalkers. They are so abundant and powerful I am very much on the lookout for things to combat them, especially things that don't rely on having the tempo. I think hexproof from planeswalkers is perhaps slightly better than protection from multicoloured in most cubes, which is to say nice but not exciting. 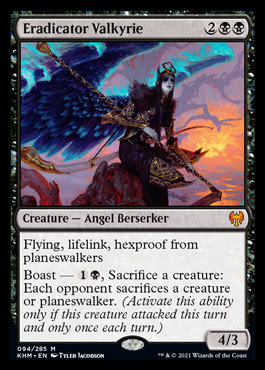 Tribal top end reach card potential but in a splash colour and not very powerful. Further to that not even in a tribe needing of reach. Has a role in a decent deck but likely not making any 40 card lists. 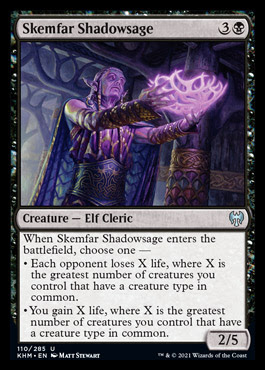 Some combo potential with the passive ability but it is clearly a 3 card combo and not a cheap one if this is involved... The token generation is a nice touch but it is barely good for booster draft so it is a push for cube. It is rare you will get much out of both parts of the card in the same deck either keeping it low power overall. Low power and very narrow are not a good combo. 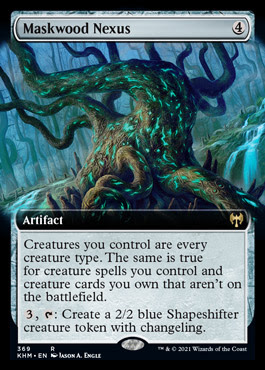 Quite powerful but all a bit needy. You need this to live, you need them to have a thing which you then need to kill, and then you need enough snow mana to cast whatever thing you exiled. The body is quite meaty and it kind of has a passive of exiling creatures that die which Kalitas has shown to be fairly annoying but I think we need more from our four drops even if this is closer to the mark than the Eradicator Valkyrie. A pretty punchy manland but not quite convenient enough for cube even allowing any basics to be snow basics. This can be 3 mana for 4 damage which is incredibly high for any lands and even at 4 (when you can't use the single mana from the Haven itself post combat thanks to vigilance) it is still on par with the more aggressive lands. Changeling and snow both give it synergy potential too. This will get a bunch of play but I think it is just out of contention for most drafting cubes. Factory and Mutavault are a little more nimble and efficient and Crawling Barrens is just a more convenient and rounded top end option than this too leaving very little space for Haven to get a look in. 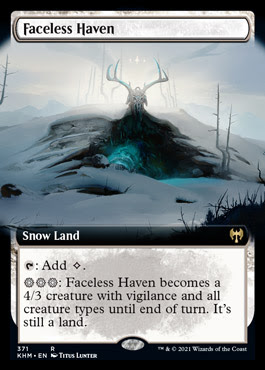