Cool card and a giant maker in blue which is quite the hot ticket for Glimpse the Cosmos. The equipment itself is pretty slow and defensive. Am I using it to protect key cards that I want in a defensive role? Sounds suspicious. It isn't worth a card so this is really a five drop. Is a 4/5 hexproof when untapped giant that leaves behind a Giant's Amulet good enough for cube? No. It isn't bad but the best thing about it is the creature type and colour. Hardly saying much. Vanilla dorks are either good enough or unplayable and this just falls into the latter category. 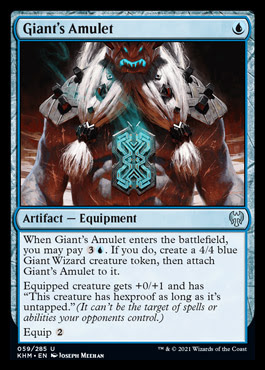 Nice to have more coloured utility lands. Counter synergy is good too but this land isn't very powerful and falls in between lands with very little cost like the graft one - Llanowar Reborn or powerful ones with higher costs like Gavony Township and Karn's Bastion. You typically want the good cards at the ends of the spectrum and so I can't see Stronghold making many 40 card lists. A nice little perk for the 100 card decks probably though. 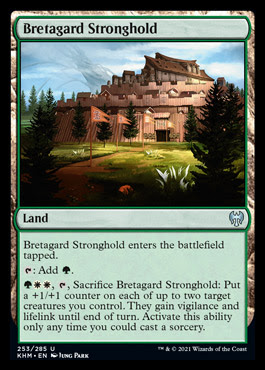 Much as I like this it is just a slow Steelshapers Gift with much more unfront needs in colour and amount of mana. Sure, you are compensated in due course with treasure and you might have a Halvar to find but Gift isn't exciting outside of constructed combo decks so it is not looking good for this. You need to have some pretty powerful synergies with sagas or treasure for this to get a look in. Not forgetting of course you still need the equipment aspect too. Perhaps some dwarf thing can accommodate all these supporting needs. I do love treasure! It is nice to see it getting more cards. I like sagas too so more of them are also welcome, even if they are unlikely to see much, if any, play. 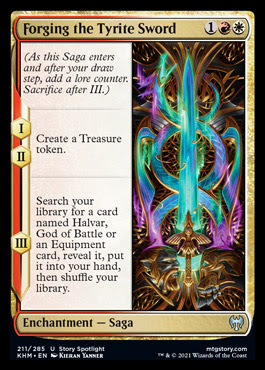 I repeatedly eat my words when it comes to assessing blue removal. Were this instant I wouldn't hesitate to call it cube worthy. As it stands I am on the fence. Three mana removal isn't premium. Sorcery is unwelcome and a 1/1 flier conceded is far from nothing. There is in fact very little in cube you can kill with this and feel like you are ahead in the exchange. This is at least exile quality and relatively broad on target range. The foretell aspect eases the pain of the high cost and can let you setup for some big turns. Certainly needs testing. I feel like it makes it but past experience strongly suggests it will fall short. 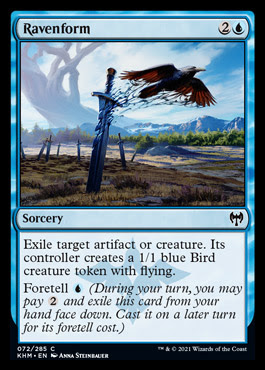 Well this is a lot of prancing about. Is swapping dorks good? Sometimes. Is swapping other stuff good? It could be but rarely will be in a draft setting. This could be nothing more than a slow expensive Lightning Helix to the face. Can't go round playing cards so situational with such low floors. Especially not four mana sorcery speed gold cards. Mild combo potential but doubt I am ever running this in anything. 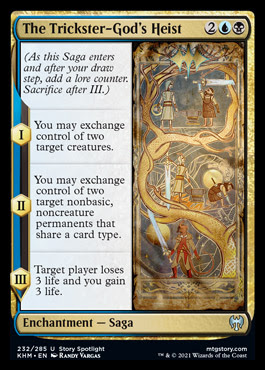 Path to the World Tree 5

This is an overpriced Lay of the Land with some silly mana sink stuff that will rarely be a thing. Lay of the Land isn't even good compared to the options out there! The thing is, this is still a good support card. In many cases better than Lay of the Land by virtue of being something in play. It can be sacrificed to Vraska or flickered or whatever you want to do with it for further value. I can fully see wanting this as a support card in place of a bad card or in specific decks like Golos Field of the Dead style things. Most midrange green decks can easily position themselves to be able to use the ability too which does rather help this out. Just a sprinkling of niceties. A lot more suitable and playable than it looks. Yes it is low power but it ticks a lot of boxes. It is not a very cost efficient card but it is low risk and has decent upside potential. Well worth at least getting a trial. 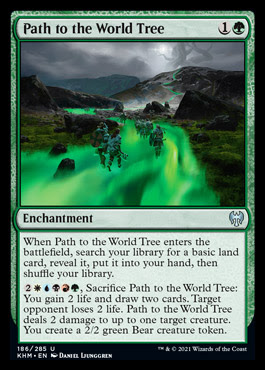 Nice to have a proper elf planeswalker finally. A goblin one next please. Much as Tyvar is pretty interesting for a tribal build he has little hope elsewhere. For the most part he only does one thing the turn you make him and that is producing a 1/1 and not gaining any loyalty. Often this 1/1 will be of little help defending the low loyalty walker. You really want to make this onto a board already containing some untapped elves for one reason or another and that is too rare in cube draft for this to have the requisite power. He wont even make all the elf decks, untapping lands is often more ramp, and removal or Overruns or card draw are things elves really want on walkers. Nice to be able to review a planewalker in just one paragraph for once... 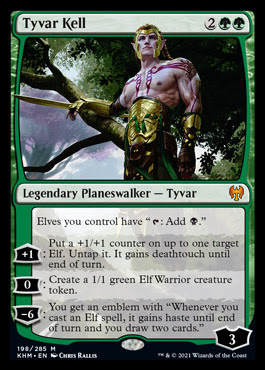 Not at all impressed with this. The God is slow, narrow and unthreatening. a 2/4 for 4 is rubbish and a 6/6 with vigilance is hardly ever happening and not even impressive when it does. Even with the support of the activated ability... Mostly it will miss and then even when it hits you think, why am I playing this card, I could have a Tireless Tracker and be attacking already. The Ringhart Crest fails to make up for the failings of Kolvori. Ramp is nice but one that is restricted to one tribe plus legends isn't close to broad enough for cube draft. Being green too no-one is impressed with two mana ramp with downsides. If this were a white God then the ramp would look a whole lot more enticing. This card is too unique to rule out entirely but it is pretty low power and low playability. 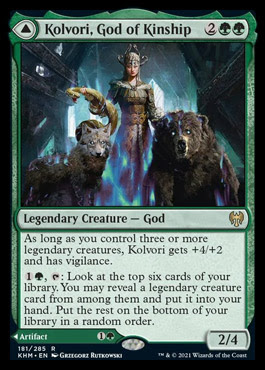 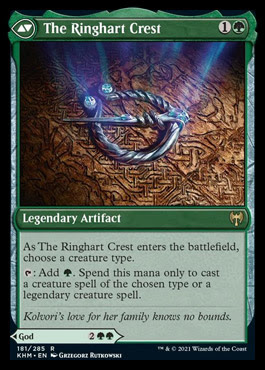 Quite a powerful little threat but not for cube. It needs too much mana investment to be packing the punches and is mostly just a 4 drop with no immediate impact. 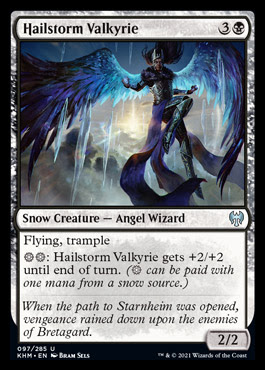 Worse than the Modern Horizons version as you would expect. An elf instead of a human might be relevant. Mostly just a cheap foundation card you play in snow decks and probably no other places. 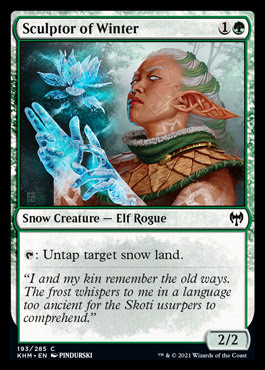 I want this to be good but there just will not be enough foretell cards to justify including this. The body isn't worth playing without high hopes of multiple cost reductions from the passive. I will obviously try and build a foretell deck and likely jam this in for good measure. Neither will be very good though.. I just really like cards that allow me to do sorcery speed stuff at instant speed. 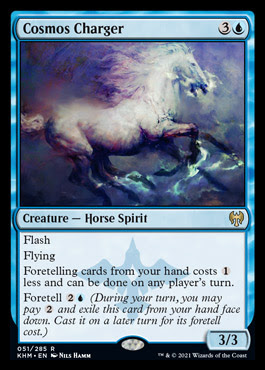 A cost adjusted Pirate's Pillage which should result in a more powerful card overall. Same net mana but able to deploy sooner sounds like a plus. Pillage was a surprise performer and has done impressive work as a supporting card in a logic defyingly wide array of exotic red decks. You really need the synergies to exploit cards like this and so I cannot see it replacing Thrill of Possibility in draft cube lists but it will certainly get attention in the more constructed places. 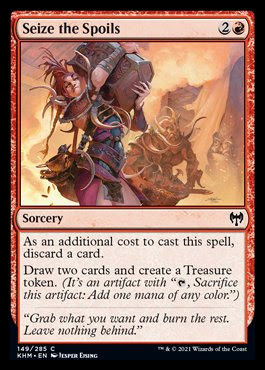