Love it but sadly too low power and slow to be playable. One of the costs to make a treasure need to go, perhaps more. The Dwarf tribal deck at least looks like it will want this what with it having a treasure theme and few good low end cards. 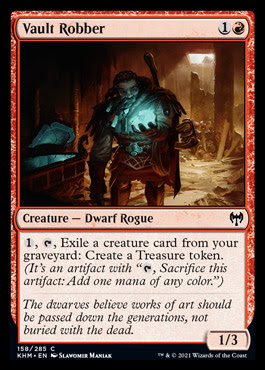 A bad version of the white boast token producer one drop. Mostly because scaling up vanilla beaters isn't where you want to be but also because this is just far less mana efficient. Tribal card only although looking good due to the repeatedly mentioned poor quality in the tribe at present. 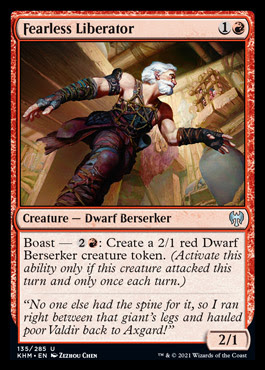 Such an elegantly designed card and showcase for the foretell mechanic. Shame the card is unplayable with such low power. Mild hope as a tribal card, a foretell card, or a combo card where you really need a 0 mana play with this CMC or some other characteristic this card has that no other 0 mana card does. 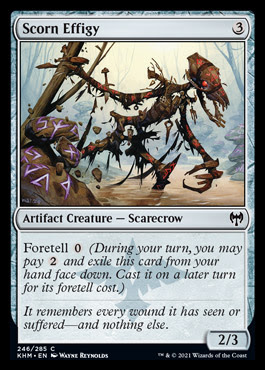 Cosima, God of the Voyage / The Omenkeel 7.5

Where to start?! Here we have two distinct cards, both powerful. Both cheap. Both offering the potential for tempo and value. I really can't see this one not being a good cube card given this card seems to not just tick the two main boxes a card needs to tick but by doing so twice. It just so much magic card. The Omenkeel is at least simpler so lets start there. It is not a million miles off a Smuggler's Copter for power. No flying is a big downgrade and being blue obviously makes it a lot narrower. The cost, size, and crew ratios are all the same and so the card is a reasonably dominant early game play. The trigger is arguably better than Copter if you connect and hit a land with it. Generally I want to be drawing a land over a loot in the early game. It isn't just value for you though, exiling cards from libraries in cube is scary. Your library is small, your threat count often low. A couple of hits from this could just be game over and that isn't just combo decks. It also empowers other vehicles to do the same but that is basically never going to be relevant. The Omenkeel will give fits to decks that cannot easily outclass it on the board or remove it easy. It will also generally be decent against planeswalkers and help to keep them on the back foot. I am not sure if Omenkeel would last in my cube as a stand alone but if it didn't it would be the fault of blue lacking many good cheap dorks to crew it with or more importantly, support an aggressive archetype. The worst thing about Omenkeel, other than low dork and thus crew count in blue, is simply that Cosima is on the other side and she is quite the temptress. Convoluted for sure but very potent. 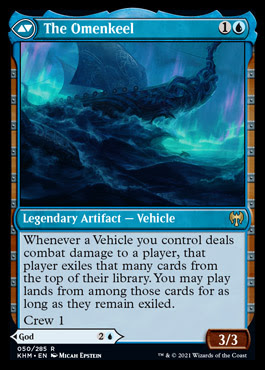 She essentially converts your landfall into stats and cards. X+1 lands for X cards and +X/+X to be precise. She comes down, has to survive to your next upkeep, perhaps gets a block in. Then you exile her and start to rack up counters. When you need the cards and body back she comes and you get a huge payoff. A three mana 5/7 that draws three cards sounds foolishly good. Having to wait a turn with a do nothing 2/4 in play with your pants down, and then play four lands before you had anything to show for your card, three mana, and crap turn, however makes that 5/7 Ancestral God sound rather worse. Sure, you can just pop a sac land and immediately have a 3/5 and card. That is fine but still quite slow. She has summoning sickness again. You also have to do lots of gambling. You might need cards but not have lands to charge her up and bring her back. If you are just desperate for action and in topdeck mode you are going to need like six turns with this just to get one card back which is miserable. You might as well try and beat with a 2/4! Cosima is like Ancestral Visions on legs. You kind of have more control but not entirely. If you have time and can set it up Cosima is going to win games for you with ease. If not she is going to be supremely underwhelming. Luckily she has a fairly nice safe alternate boaty mode. Another issue with this card is that both halves don't ideally fit into the same sorts of deck. One is more on the aggro side and the other more control. This pushes the overall package much more towards being a midrange card as a result. I think it is a bit needy and hard to home presently to be a bomb but it is still plenty good enough. The power is there for sure, just ways to use it are not yet established properly and supported. I think this will get better with time, unlike most cards. 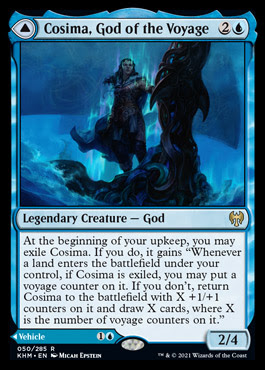 Niko sucks and everything he touches he makes suck. This card isn't just a three mana do nothing. It takes it's time and does a new instance of nothing three times over three turns. I am not even sure I would play this in a foretell themed deck mainly in these colours. When you really get down to it this card is just a really bad and unreliable and narrow Revitalize. Laughable. 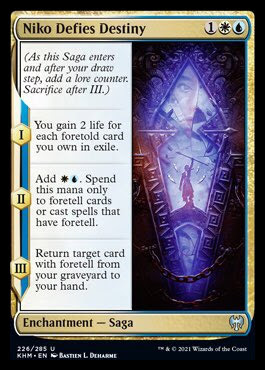 This is a lot of card but it is a gold fight card. It is also a sorcery speed two mana fight card which isn't even good by the standards of fight cards. When this works out you get quite a lot of return but it isn't worth the risks. There are some unique things about this card so that combined with the power level earn it a 1/10 but I really can't see playing this anywhere ever. 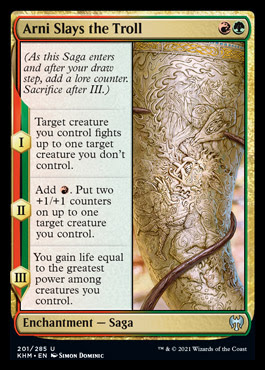 Very reasonable tribal wrath effect. You don't even have to play it in a tribal deck. You will always be able to keep a small dork alive with this and clear out all the opponents, sometimes you will keep a few alive. The issue is the bigger dorks. When your four mana sorcery speed Wrath isn't saving you against some medium sized stuff it is a bit awkward. This is much more playable in a cube type of setting where most decks have dorks and board presence of which a lot is token chaff and smaller utility dorks. I will be testing this one for sure, it has a decent shot. I was very unimpressed with Yahenni's Expertise but hopefully this should be tempo and card advantage rather more reliably thanks to not needing relevant plays in hand. This is like a midrange players Wrath which is a welcome tool for cube. 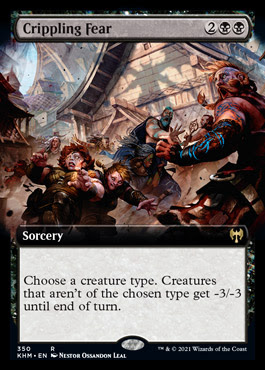 This seems like an incredibly dangerous commander. Bow of Nylea stock also just went up rather. There are already 6 dorks in green with death touch for just one mana. Fynn is going to get a lot of quick kills. Super narrow but a lot of potential. The new enchantment just spoiled in the commander decks is a little scary with Fynn as well and gives him a tribal angle if he wants it. 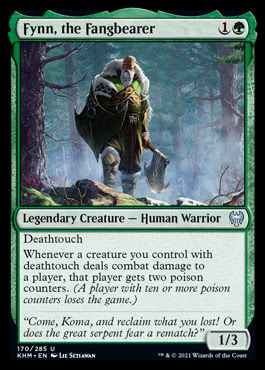 Restoration Angel that also protects against mass removal. The body alone is quite pleasant for the control players. The foretell option greatly increases the flexibility of the card too and lets you run it out turn three if needs be. The downsides of the new Resto Angel are that it is WW in the normal cost making it a little less splashable and that it holds the exiled dorks until death. This is fine if they instantly come back thanks to a mass removal spell that kills the Guardian but if it was just spot removal, or perhaps you are just trying to milk some EtB value then you are going to have to wait. All round pretty solid card. Not quite so many abusive swings in normal fair combat as Resto but much better suited to aggro decks combatting one of their most pressing concerns. If control decks wind up playing this anywhere near as much as aggro decks then I would be giving this an 8/10, as it is I expect them to only occasionally play this. 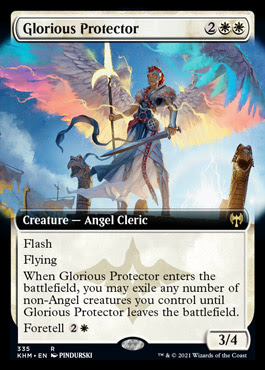 Ascent of the Worthy 2

A pretty cheap Zombify but waiting three turns on your recursion takes a lot of the sting out it. Stages one and two are interesting. They give a kind of indestructibility shield to your dorks at the cost of one dork per turn. This could be really useful in loads of ways, all very narrow. The obvious one is just getting in big safe attacks. Then you have quirks like doing loads of damage to something like a Boros Reckoner or just having a kind of sac outlet for a dork. While this is a fair amount of card it is going to be tricky to find good decks to put it in and good situations to make the most of all parts of the card. Mostly it is just narrow, situational, slow and gold thus not getting near any drafting cube of mine anytime soon. 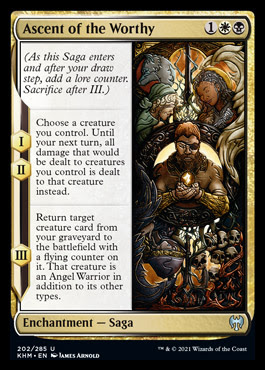