I quite like this as a one turn big hit works well with the notion of setup, of spending some mana ahead of time so you have more space on the big turn. This is still a little overcost and narrow for general play but it is a somewhat suitable card in those various one big hit decks. Perhaps this will help lure people into white for such things. Probably not as these kinds of deck rely on raw speed and this is still relatively expensive. 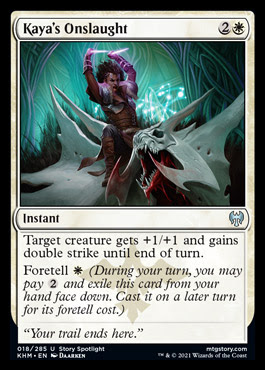 Low power support card but cheap, lots of different synergies supported outside of creature types and then the proper reason this card will get action - the changeling type. Not loads of action but this will crop up here and there, especially now that there are more high CMC only tribes getting support like Giants and Angels. 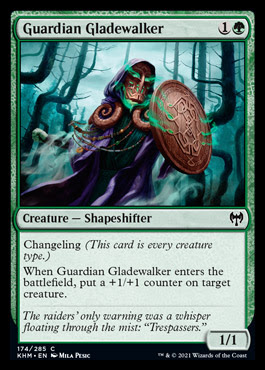 This isn't powerful enough and the changeling support does little to help that what with this being a 3 drop and not a 2 drop which pretty much rules it out as filler or support. I feel like if I need this to bolster my tribal count then my deck is just bad. 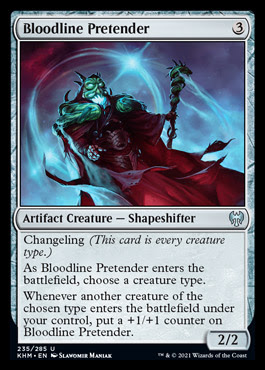 Moritte of the Frost 1
I am sure this will have plenty of combos with things by virtue of the types it endows to the copy. It is however quite a bad card being a five mana gold Clone with mediocre upsides and the big restriction of only targetting your stuff. It can't even copy planeswalkers effectively making the ability to hit any permanent type rather less exciting. 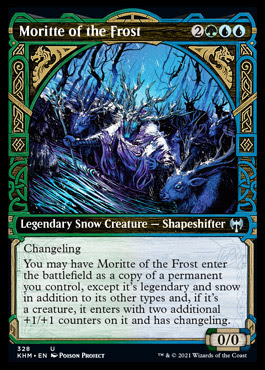 This is a support card but it is needs support itself as without the 2/2 token trigger it is garbage. It is too hard to consistently have this active in any deck that might play it and as such I think it is unplayable. 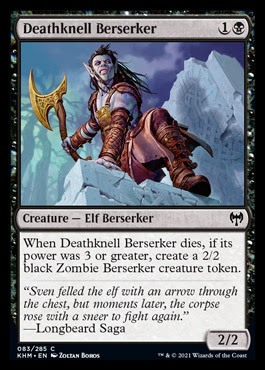 This is pretty dangerous. This only needs to trigger once to be good. Twice and it is nuts. It isn't even that hard to do in a deck where you are not even trying, especially cheaper aggro ones. Sprite Dragon and Run-Away Steamkin level of card nearly. Not quite as good but generally a little less narrow. Certainly one of the better aggressive black two drops. Dull and linear beater but a good one thanks to good stats, scaling and evasion. 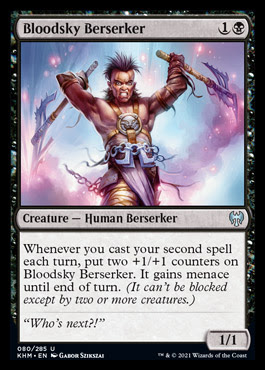 This is surprisingly close to the mark. I might even give it a little test to see how close to the mark it is, you never know, it might do some cool stuff. Instant speed, broad coverage of targets, one for one removal that clears two things out of the way. The kind of thing you might entertain to bolster your Torrential Gearhulk. 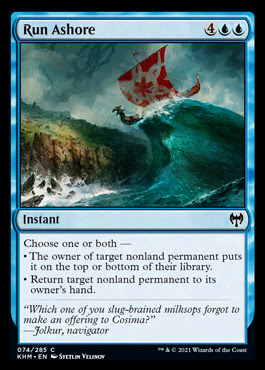 Instant speed Barter in Blood for one more with a bit of foretell to help smooth that extra cost out a bit. The card is fine, sometimes it will be a potent two for one. Other times it will hurt you more than them. A card this costly cannot be this situational for cube drafts. I do prefer it to Barter but that hasn't seen play in years and years. 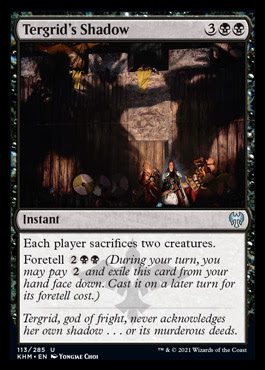 So this is the form Runes will take. I am a big fan of the design principle on these, it is elegant, new and creative and perfectly fits the flavour. What it isn't is very good in this instance. Two is a bit too much mana for things that need targets in play and can be fizzled for that 1 for 2 discomfort. There are no equipment I am that excited to empower although obviously those like the Swords which have triggers based on connecting do work nicely with it. Just feels like a lot of time and investment to be worth the end result, seven mana plus the cost of the creature getting equipped. 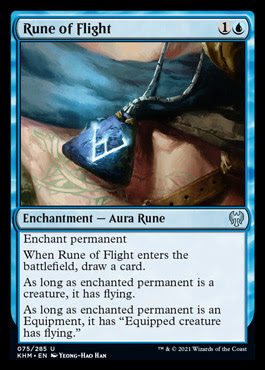 What an odd card. I assume it is designed on some aspect of the story or as a reference to some lore. The restriction on what you can play with the mana is a pain as this would have been a nice tool to use in ritual storm decks to transition out of red mana with and ease the burden on Manamorphose. It is still a ritual and so it will likely find some places where it's particular blend of mana production appeals. I can't imagine any deck really wanting both modes and so you are only playing this for the ritual part. You may end up using the other bit in those decks now and again but it isn't much in the way of a boon to the card. 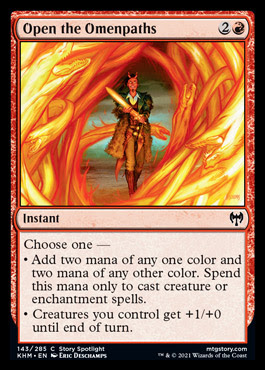 Fall of the Imposter 0

Cool design but sadly a bit too slow and gold for what is essentially a removal spell. I love how you can pump the thing you need to kill so that it is a legal target if desperate but that doesn't make the card good. Feels a bit like Unlicenced Desintegration but worse just because you really want removal to act right away. So much can change in a game over the course of a saga. 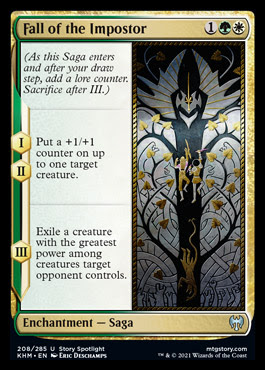 Mass goad with a Revenge of Ravens style Blood Artist bolted on. This is is too much of a 4/3 for four. While it does do something right away so to speak it isn't exactly always useful and is still mostly failing the removal test. There is no assured value or tempo here. Vastly more use in multiplayer settings. 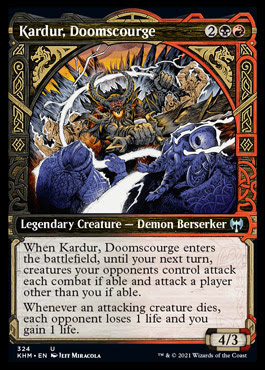 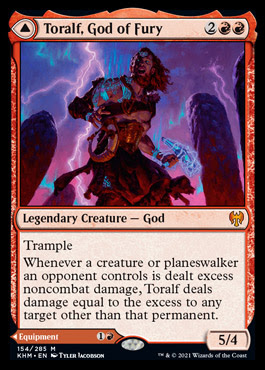 I like this rather a lot. Toralf himself is fine. He is fat and has trample making him a relevant threat. His ability is surprisingly good too even if unsupported. All your burn basically divides up perfectly. You can play Toralf and instantly Fireblast away a whole set of four Lingering Souls tokens. It shouldn't be too hard to play Toralf alongside another spell or effect to in some way get a bit of a two for one off the bat and make up for his failing of the Doom Blade test. You can support him if you like too. Blasphemous Act is the most abusive but really any mass burn spell will be pretty scary with Toralf like Mizzium Mortars and Storm's Wrath. Those could easily be fatal should your opponent have too many weenies. Toralf is nearly good enough on his own and the flipside of him handles his bigger weaknesses of being expensive and easily dying to removal and putting you behind.

Toralf's Hammer is a cheaper, but back loaded Hammer of Bogarden with some bonus utility. It is six mana (plus a tapped creature) to deal 3 to something which is not a good return but it isn't a bad one either. It is free in terms of cards so we are comparing it to the flashback of Firebolt rather than the front end. The Hammer sits in play and ups devotion and metalcraft. It can be relevant just as a big Bonesplitter if you happen to have one of many red legends in play. Particularly nasty on both Kari Zev and new Krenko. Compared just to Hammer of Bogardan the cost is more easily broken up. It is more easily reduced. It is more convenient about when it can be used. Indeed the damage part can be done at instant speed which always improves a burn spell a lot. It isn't countered by graveyard disruption either. You can even do it multiple times a turn if you are literally swimming in mana and untapped dorks. Mostly it is nice because you don't have to commit with it, just throw it down and use it as required. If it happens that you need a Toralf and not his Hammer then you can setup for that. The card overall isn't a bomb but it is powerful and it is flexible. It gives you loads of options and loads of angles of attack. There are a lot of red decks I would be happy playing this in from aggro all the way to control with relatively few that I didn't want this in. It may well end up getting edged out of a lot of lists in place of more appropriate and powerful four drops like planeswalkers, Torbran, Hazoret and such but what this lacks in raw power it does rather make up for in utility and broad playability. Red has a surprising number of legends to stick this on! 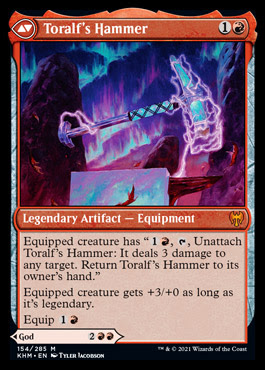