Rampage of the Valkyries 3

A potent little Serra Angel maker that has some cute angel synergies. Pair this with enough angels or flicker effects and it does a lot of work. Play this as a stand alone and weep at the frequency your angel is bounced and you wish you just had an actual Serra Angel. Powerful but polar and too gold for most cubes. 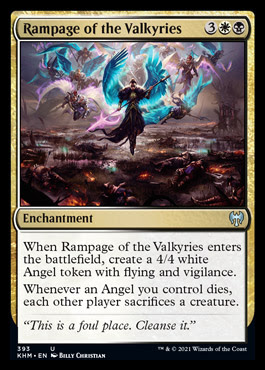 Tribal only card and even then probably only in aggressive elves rather than combo ones. Certainly the ceiling on this is nice and high but it is rather a win more card. A nice way to power up Priest's of Titania and Gaea's Cradle but a bit pricy and risky for my liking. Elves lose when they get their first few elves killed and that is when this card looks worst. 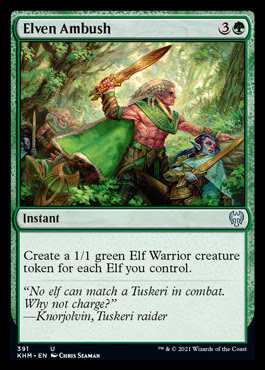 Relatively high crew and mana cost for the potential damage output. This is awful without treasure production and hardly exciting with it. The only real thing this has going for it is how well it works with Magda. This may prove a useful support card in tribal dwarves but has little hope outside of that. 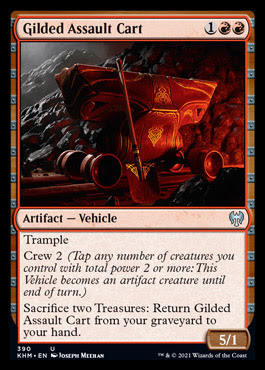 I might play this if I were to play a tribal giants list which presently isn't really a thing. Even then this is quite a risky play being sorcery and needing not only a giant in play but to also successfully attack. A powerful effect for the mana if you can land it, you don't even need to hit many cards with it, two is still amazing return. More is just getting towards Ancestral levels of efficiency. Due to high giant CMC and mana constraints there is generally going to be a cap on how many cards you want to hit but too many to play them all is mostly the kind of problem you want. The potential value of this card is so filthy it makes me want to abuse it despite how risky and narrow it is. 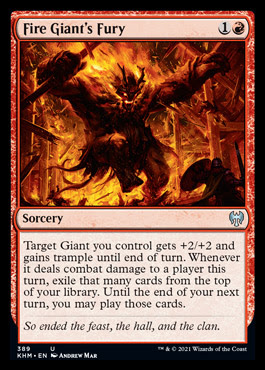 Cranial Plating this is not. The costs to play and equip are high and the things turning it on will be hard to amass in sufficient number to make this appeal. I might be interested if this gave some evasion too but no. 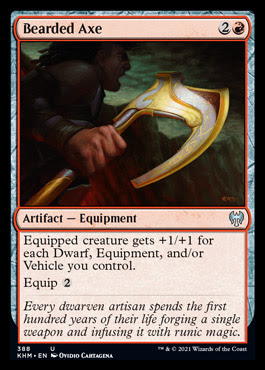 Nice to have a Nekrataal that takes out planeswalkers but at five mana and needing a pile of elves in play I can happily rule this out for 40 card singleton 1v1 lists. Elves does a lot more with 5 mana than get a value 2 for 1. 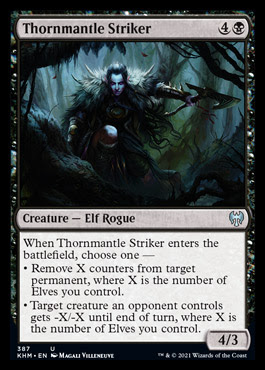 Very low power but a cheap and black angel, both of which are rare things. Self mill and some potential life is interesting too but I don't see this being played for either of those reasons where there are cheaper alternatives like Mire Triton on offer. For support and setup cards low cost (<3 mana) is where you want to be. As such this is only really a tribal card and even then it remains narrow and low power. 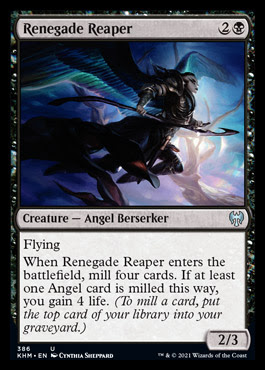 A Wirewood Herald with recursion instead of tutoring. Sadly for this it is costlier, in the splash/off colour for the tribe, and a far more abundant effect. Black and green can get dorks from the bin for for days. Tutoring is also far more proactive than recursion. Cannot see myself ever wanting this one in 40 or even 60 card singleton. At 100 cards this will make the cut here and there as useful support. 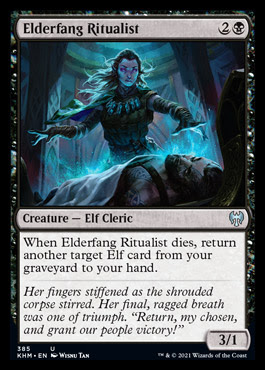 Cool flavour and nice to have a cheap steal anything card. Ruined by not only needing a giant but needing it to stay alive. Too risky even in a tribal deck. 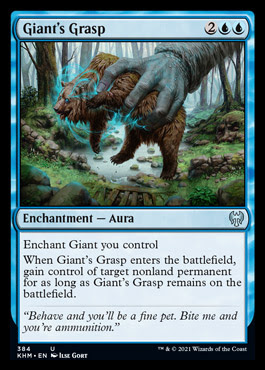 Mostly this is a more expensive Unsummon. I cannot really see what situation the effect is useful, let alone coming up. Only not getting a flat 0/10 because it has a faint air of combo potential about it. Even then I can't imagine how it would be a good combo... 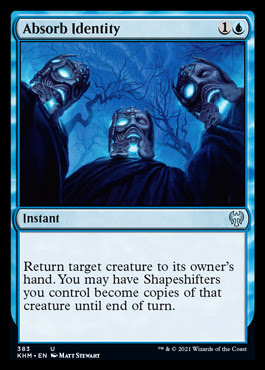 If making a tribal angel deck this is a good starting place. It is cheap and has some payoff while also supporting the angel count itself. Not a bomb by any means but a good tribal foundational card. Useless elsewhere of course. 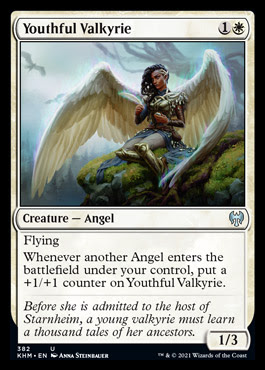 This is quite some hoops to jump through for your value when compared to the likes of Rabblemaster. It is probably necessary for a dwarf tribal deck to help get those all important on-type bodies but you are going to need to support it. It is all about having vehicles and being crew for this dude. 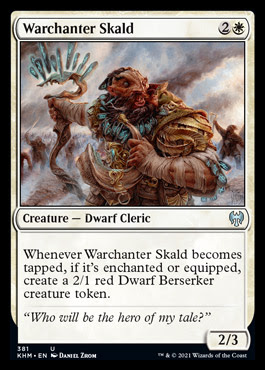 Another decent angel support card but pretty vulnerable and slow. Pearl Medallion seems a better place on the curve, rather safer, and more rounded. 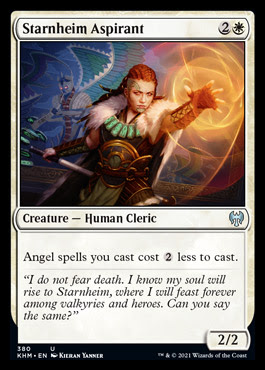 Combo potential as a way to cheat equip (onto a Dwarf...) and crew costs but far too situational to just be running this in a tribal dwarf deck with some equipment and vehicles. 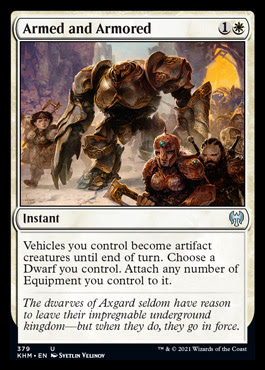 This is a stand alone Elvish Archdruid. I like it for attacky elf decks but I doubt you can find room for it in 40 card lists just with it being quite a pricy card. Both lords and high mana producers come cheaper, for this kind of mana and elf deck can be making really devastating plays. 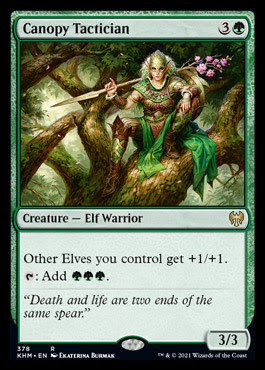 Tiny chance of being playable in a tribal deck as the potential damage output of this card is then very high. Mostly this is a vanilla dork that is vulnerable to removal until it attacks and that makes it pretty weak. Due to the potential it might be worth supporting this with effects that give haste at which point you might have a viable tool. 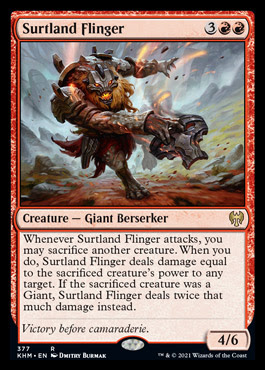 Powerful effect but so vulnerable and pricy and in need of setup that it just has no chance in any sort of good 1v1 deck. 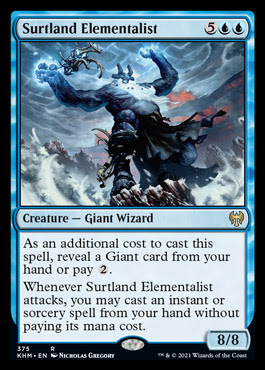 Very powerful but pretty expensive. If you can reliably gain 4 life the turn you make this then I am interested but just flopping and hoping it survives to combat is a whole lot less exciting. Mostly this is just a big Resplendent Angel. It is viable for angel builds and potentially also lifegain builds although their top end payoffs are probably already better than this. 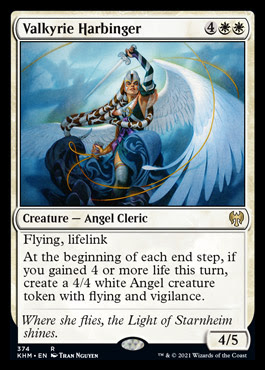 Playable top end threat in either of these two tribes but not overly exciting. The mana cost is high and not something you can cheat on and the immediate impact on the game is low. This is just a grindy value card where I would much rather pack something threatening and powerful. Angels are hardly short on good top end either. 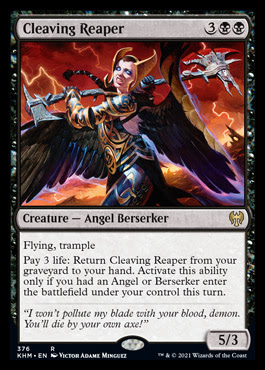 Lathri, Blade of the Elves 0

Cool commander option for elves but for normal play this is a 4 mana 2/3 with no immediate effect. Even if it does live and get through making a pair of 1/1 dorks is a long way from exciting. The tap ability is a bit of a pipe dream too, having 10 dorks in play is pretty winning already. This needed one of many things to look promising in 1v1 be that lower cost, a means of having an immediate effect on the game, or just being substantially more survivable. 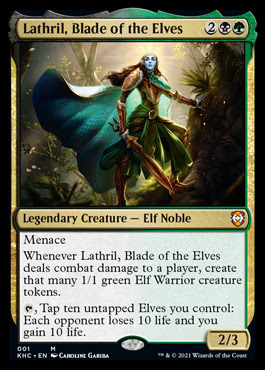 While reducing a cost to 0 is super powerful, foretell being a new set mechanic thus having few instances in cubes makes it narrow. Outside of build around decks this aspect of Ranar is likely a blank. Luckily he does more. Churning out 1/1 flier tokens is lovely and rather more relevant of an ability regardless of how many foretell cards you have. You could build around it in a number of ways fairly easily in a constructed setting and a lot of cubes pack a flicker package for UW too which would support Ranar. Even so, Ranar is still going to be a bit slow, needy, narrow, and risky. Not a card I would cube even if I had a flicker package. 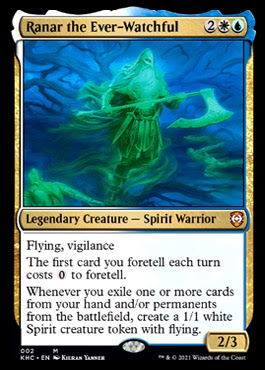