Part III to follow at a later date. Sorry for the confusion, I'll do something dumb and lose a load of work if I try and rename them. I am sure you lot are all smart enough to cope with them being out of sequence. I just wanted to wait for nicer images of some of the spoiled cards reviewed in part III

Invasion of the Giants 3

Base line for this is a slow 2 mana gold Preordain. Not good but certainly not bad. Toss in two non-creature damage and potentially a two mana rebate and you have suddenly gone from OK to great. Sadly we have precious few giants to trigger those bonus perks. You don't need that high of a chance to reveal a giant for this to be worth including but it would still mean a lot more giants in red and blue than there presently is in my cube (3). You probably need to reliably have at least 2 in your deck and that means at least doubling the number of giants in my pool. Even then the card is borderline, more would be needed for the card to become a strong cube card. It is certainly a very strong reason to consider going blue for a tribal build and should be one of the first on the team sheet should an Izzet tribal giant deck be a thing. 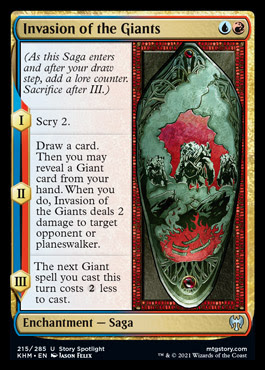 Blood on the Snow 6

Very interesting indeed. Six is a lot for a Wrath effect but cards that kill walkers more than one at a time are few and far between. There is merit to this card even without the recursion element. I think you will be pretty far ahead after playing this and just getting back some three drop. Walkers or creatures means you always have the ability to handle the most pressing threats and have lots of options on fairly one sided exchanges with big card advantage and tempo gains. That all said, this is a six mana Wrath that will not average that impressive of a thing back for you. There are more utility 6 mana Wraths and more return value ones as well and none of those have really stuck. This hinges more on the planeswalker killing front than the recursion which is probably for the best as not all cubers allow my relaxed attitude towards snow basics. Still, for six mana I really want the option to take out walkers and dorks at the same time otherwise this is just a bit to dodgy at stabilizing and a bit too easy to play around. Test worthy for sure but not expecting it to cut it. 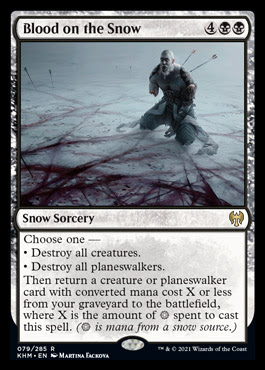 These are great for budget cubes. If it were not for Triomes I would consider the opposing colours for cube as fetchable is such a nice perk. Duals with basic types allow for so much in the world of building be that for High Tide or for Utopia Sprawl. There is a lot of reason to want them and so I welcome these even if they are not making many cube lists. 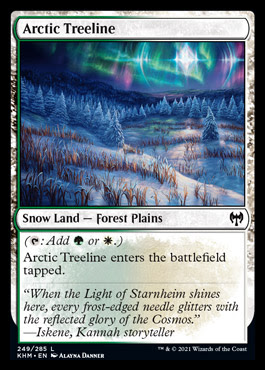 What a card. I love the exotic design this one has. Sadly Niko is pretty poor when push comes to shove. The three mana iteration is all a bit meh. You can Shock tapped creatures only which makes for pretty dodgy removal. The scaling potential with shards and other draw is nice but still not great removal or protection. Making more shards is quite nice but ungodly slow compared to just running some 3 mana Jace and drawing cards without extra mana investments. The +1 is interesting but often a do nothing or potentially even a make things worse! Niko has low loyalty, low utility, slow returns, on top of being gold and somewhat situational. It is still a planeswalker and will still be fine in most cube settings but it is one of the weakest options. Most of the Dovin are better and none of them are good! 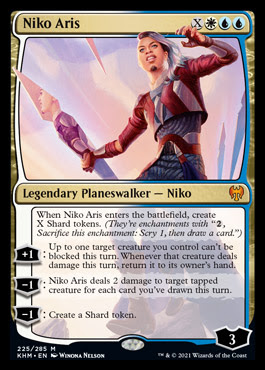 Rather a lot to get through with this one. Feels like the most text and stuff going on of any card to date. So lets start with Valki, a kind of Kitesail Freebooter for dorks. 2/1 is worse than 1/2 flier and dorks is probably worse than non-dorks as well. Freebooter is great though and Valki isn't that far behind. Rarely will you be able to take the things that kill Valki but you will often be able to disrupt curving and even force some awkward responses. No one wants to have to use a good coverall removal spell like Hero's Downfall or Assassin's Trophy on a card like this but Valki will force this enough to be close to good enough just at that. The X ability is cool too and increases the urgency of killing him while also improving his potential in the mid to late game. There are so many cheeky things you can steal and become that Valki will be frequently annoying. Oh look, I'm an Ophiomancer, guess I'll have a free snake. I'm an Adanto Vanguard and you can't kill me to get your Vanguard back! You also get a nice bit of information. Valki is a fine and fair cube support card all by itself. A good cheap disruptive tempo play with a decent floor and an impressive ceiling. Slap on a Tibalt mode and it is all free gravy. Tibalt doesn't need to add anything so anything he does will take this card up in value. Valki already has some reasonable late game scaling and looks a whole lot more exciting of a top deck than Freebooter or Ravenous Rats! 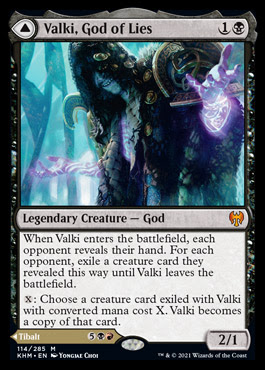 At five mana Tibalt would be nutty. At six it would be interesting. At seven the card is under powered. The thing is we are not comparing this to other seven drops in the same kind of light. Normally a seven drop is bad because it takes substantially longer to become relevant than five or six drops. Valki on the back side means the card is pretty much always active so your opportunity cost is that much lower. It slants the scales more towards the power and effects of the card and away from the cost. If you want the power or the effects then you play in a way that has the best odds on getting to Tibalt. If you need things to do before you can get to seven then Valki is there for you. So yeah, having a solid answer to some threats or a very powerful value engine as a mode on a decent two drop. Sounds fantastic. Reminds me a bit of Jace, Vryn's Prodigy although a fair way less good. Just good solid two drop card with quite impressive potential later down the line as a kind of free thing the card does for you. 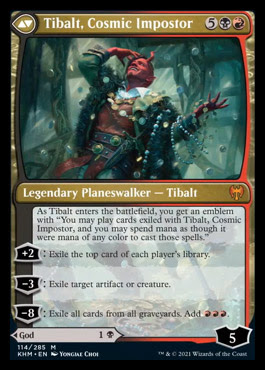 So, the +2 and the -8 are mostly just value. Good value for sure but pretty slow given you already had to play a seven drop. You may well need to +2 just to keep Tibalt alive as the "protection" ability leaves him on a very vulnerable 2 loyalty. Still, no real complaints, powerful removal and value generation are the hallmarks of a good planeswalker. Tibalt doesn't directly win the game but should do so pretty quickly and comfortably if he sticks around in play long enough. It is worth noting that this is not really a gold card. It is less gold than Lingering Souls or Tasigur! It is still playable with literally zero access to red. It is super easy to splash as you only need the red late, if at all.

I see you there Hill Giant. Powerful if you can trigger the draw 3 but you can't in any way reliably even in aristocrats and the like. The floor is then just far too low for this to cut it even in the decks that theoretically support it. Best use seems to be with mass removal of your own and trigger it using opposing dorks but it still isn't good enough then either. 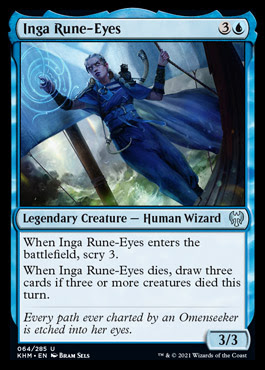 A nice value semi lord for aura and equip decks, mainly the latter. Narrow but cheap and a fair amount of card. Koll seems like he has a place in a few constructed style decks, fun ones but clearly all mid tier ones at best. 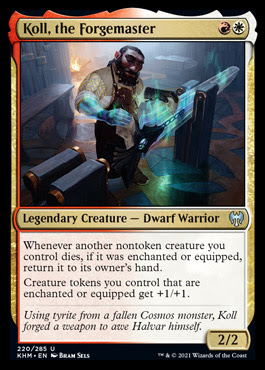 I really like this although it is another card that is really fluffy and all over the place like Valki. GGG is the biggest hurdle for this card but with the Guardian Project / Great Henge style of green decks impressing presently I can see this Troll having good homes and doing well in them. Certainly narrow but I have been happily running Goblin-Chain Whirler and Benalish Marshall and Archmages Charm. Black has had countless BBB cards over the years. Green deserves one! This Troll is a lot better and more suited than previous GGG offerings too as they are either a little fatty do nothing (Steel Leaf Champion) or oddly positioned (Llanowar Tribe). Old Growth Troll is resistant to removal and that makes him great. It is what green wants. He is also a pretty serious threat you can flop out early. Trample really ensures he is doing work at killing walkers and applying pressure. He dies into essentially a Wild Growth. The land doesn't tap for GG extra, it is instead of the normal G and so only one extra green hence just Wild Growth and not Overgrowth. Still, very happy to be ramped when my three drop dies. Then being able to cash that land in for another 4/4 trample is outstanding. The ramp lets you dump out your stuff a bit faster and remove the need of the extra land quickly so that 4/4 will be coming back often. It is also effectively uncounterable and flash and still relatively cheap at three effective mana. Old Growth Troll is a lot of tempo with a healthy mix of value and utility thrown in. I am excited to play with this and hope it lasts. Power is not the issue for the Troll, it is playability and viability of the few homes it does have. 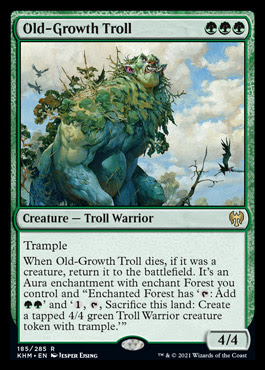