Supreme draft has arrived on MODO and is an interesting format, if utterly foolish in a powered cube. For those unfamiliar with the format you take 18 boosters total and take two cards from each discarding the rest. This leaves you with 36 cards all of which are first and second pick quality. The resulting decks are stupidly good. Not helped at all by the fact that the MODO iteration doesn't track boosters as if from one cube pool and lets you have duplicates as a result. The format has some advantages in that you don't need other people to be involved in the draft as well as some nice logistical ones for doing it online with others. It also has some disadvantages as you can see from this turn one screen shot below. To describe it as an RNG fest would be an understatement. I have had decks with effectively no power and others with double figures, the latter being much more common. Much as vintage supreme draft is very silly it is quite novel and fun and shouldn't detract from the fact that the format is probably quite good for normal cube play, either unpowered or even just not having duplicates possible. 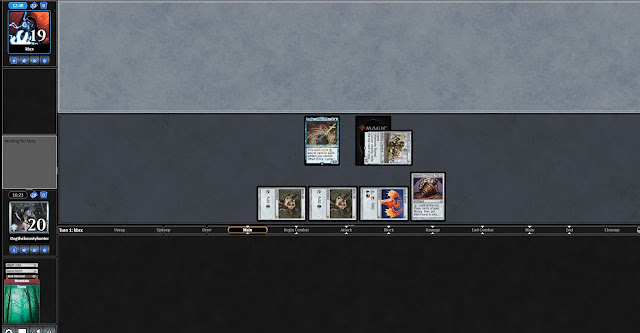 For those wishing to play the format I have some advice but mostly it is about having fun. Obviously pick power almost always. Be in blue in order to facilitate picking up Ancestral and Time Walk and indeed most of the other coloured bombs. Archetypes are not really a thing, just do broken stuff as quickly as possible. A lot of cards are utterly unplayable as are a lot of archetypes including most  conventional aggro and all midrange ones.

It is such a fast format that even some powerful cards don't really cut it if they are too costly or too slow to take effect. You mostly want game breaking stuff, cheap disruption, fast mana, and card draw. Things outside these categories are just not much help. Some typical high picks fall off a lot in value. Strip Mine for example is unimpressive as people have so many Mox. Library of Alexandria is also less good than usual as games are over before you have time to really milk it. Holding all your Mox and such back in hand to keep a hand size of seven is just asking to get them all Wheeled or Time Twisted away. Other cards like Ugin which are typically bombs are of less use than normal what with not answering all that much and not ending a game all that fast. Sure, all these cards are still decent but they are far less good than usual and should wind up in decks less often.

Aggro is viable if you have the kind of disruptive dorks but without them you are just going to get mauled by broken and unfair things. Eidolon of the Great Revel is on of the very best here. Thalia is quite good too but she typically hurts you too and white aggro is a little dodgier than red being that much slower and less interactive typically. It is worth noting Direfleet Daredevil is a pretty sweet card as it will usually have Recall and Time Walk to cast.... Even fairer seeming cards like Tireless Tracker and Bomat Courier are surprisingly good and playable what with having cute artifact synergies for the likes of Urza and Tolarian Academy and just being card draw tools. That Courier in the first picture drew us four cards that game and could have drawn more (with Emry recursion) if it hadn't already drawn us into better things to win with. I think we went on to cast a 10/10 walking Ballista on turn four or five (another great card when you have big mana tools) to clear a path for our sizeable Urza construct through an opposing Wurmcoil Engine.

Draw seven effects are amazing due to how many fast mana effects most decks typically have. This in turn makes card draw disruption one of the very best things in the pool to include Hullbreacher, Narset and Leovold if you can play him. Steal artifact effects are also great as they always have decent targets. Dack Fayden in particular as he is also a draw tool. Thieving Skydiver is the other card in this camp that jumps a lot in value. Here is the pool we had for that draft, it was one of our best but we have seen numerous better decks and had plenty of pools very close to this one in power. We basically played everything bar the costlier red cards plus a few basics. This list could have done with a couple of draw seven and a Force of Will but we made up for it with good ways to spend mana, good threats for the meta, and a bunch of more unconventional draw tools. Nissa was pretty comfortably the worst card in our final list and she was hardly bad...

Here is one of the packs we were offered midway through, what would you take? 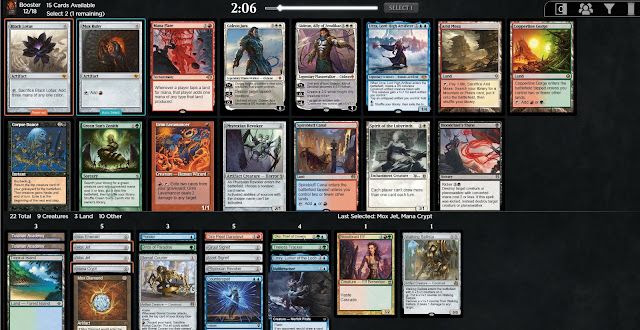 The gut reaction is to take the power but we went with Urza (and Lotus although I would have been more than happy with the Mox instead) as we had the synergy to support him properly and he just does everything. This blew my mind a bit that a four mana dork is a card I would pick over power. It wasn't wrong either, Urza is a joke of a Magic card. Far too pushed really. It is a sign that power creep has hit a limit and if it goes any further things are going to go off the rails a little. Here are a few more pools that help to paint a picture of what a good deck should look like in this format.