Interesting modal card. Pricy and situational as removal but still, green removal. Land amination is narrow but has a lot more potential. With any sort of Anthem or global pump effects it is potentially a finisher but you need so much mana to do so as it doesn't untap them. As such probably better as a way of quickly making a load of fodder to sacrifice. All told this is a bit costly, situational, and janky to get a main cube slot but I am sure it will have uses in some exotic brews. 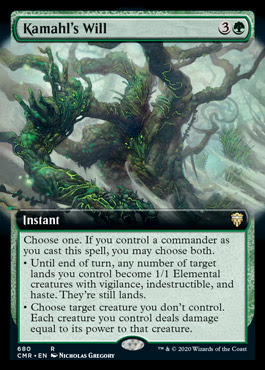 A kind of self contained Craterhoof Behemoth. Have a bunch of dorks in play and ready to attack? Then the Overrun probably wins there and then. If not then just untap, animate four lands and Kamahl should seal the deal solo. Not as much immediate punch as Craterhoof and so will likely see rather less play in decks like Natural Order and elves. In commander this seems mentally good for green and should dramatically speed up sessions. This has a better chance in my midrange cube than Craterhoof and certainly merits some testing. With things slowing down a bit in my cube I can see this nicely rounded top end finisher having some appeal. There are only so many Ugins to go around! This is a very green way to end the game. 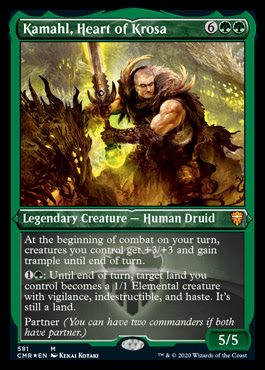 Prava of the Steel Legion 5

There are nearly enough token generators in cube for this to just be good. The body is poor but at least it is durable which is what you want from your dorks that are about the effects. Token generation ability is also poor but it is certainly useful being on theme with the card and a nice mana sink. Mostly it is about giving tokens +1/+4 which is pretty nuts. How does six in the air from my army of 2/5 spirits sound? Pretty hard to handle. Even just vanilla 1/1 tokens start to be a problem at that size. Token heavy cubes should likely run this. I will be testing it for sure and even if it isn't there it will certainly appear in those Intangible Virtue builds. 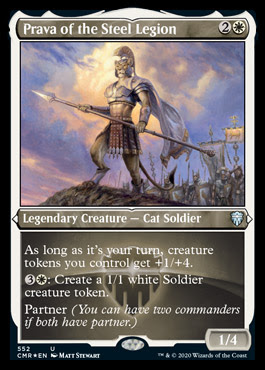 Cool looking card but too mana intense and lacking in combat potency for cube interest. I like the design such that you can get back the exiled creatures with any iteration of Livio and somewhat reducing the risk of using him to "protect" your dorks. That however is a long way off making up for this rather glorified looking Bear. 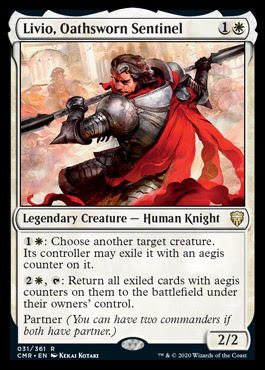 This seems pretty brutal but a little risky. I can almost be a do nothing as giving away the monarch rather mitigates the upkeep effect when you are no longer the monarch. Maintain the monarch yourself and this is going to steamroll the game quickly. One turn and you have drawn two and either done six or hit them for two in the hand. That is like a quicker Demonic Pact with rather less downside! Two turns with the monarch and you have Ancestral Recalled yourself and done irreparable damage to the opponent. This might be powerful enough that you jam a deck full of removal and defensive dorks with this and tutors for it. The 1v1 play of monarch isn't wildly too my liking as it is so swingy and as such I have a slightly higher bar for entry for this card than I do for others. It probably goes directly from bad to oppressive and no fun with little to no metas or context in between in which it is interesting and appropriately powered. 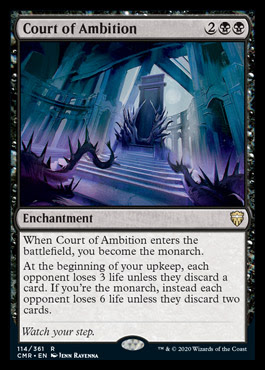 A bear that gives you conditional mana. Colourless is somewhat harder to use and typically lets you play bigger rather than more. Symmetrical is potentially an issue but not so much as being a narrow, low power gold ramp card. I can think of several ramp tools I would want to play over this. It looks flashy but it is actually just fiddly. Any simple mana dork, Rampant Growth or rock at two or less cost is going to serve you more reliably than this in most settings. Even if you do get it to work for you there is always that risk the opponent goes as well which would be a little awkward for Belbe... 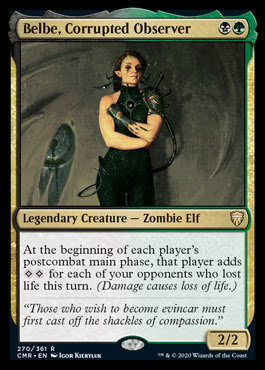 This is fairly powerful doing several potent things all at once. A 5/5 flier is obviously pretty good to have in play on offense or defence. Drawing a card every end step is lovely. Not being able to take damage is tasty too although apparently it doesn't stop you losing the monarch which is likely to be for the best as this would make Archon a one card lock against too many decks, hard in some cases and still often long enough in the soft ones. This is probably a bit too slow to quite cut it but none the less worthy of a test. It is still going to be a chore taking the monarch away from you if you have a 5/5 flier to block with, attack back with, and all the while taking no damage. 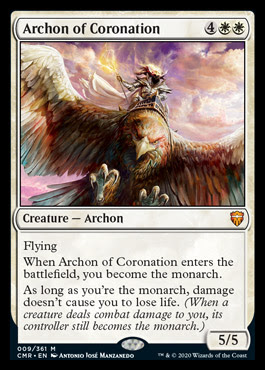 This is quite cute. A kind of Three Wishes in red, in indeed actually just Act on Impulse, with the option on a potentially scaling Seething Song. Early the ritual will be most powerful and most reliably a big mana boost. Later on you want the cards and so that mode gets more interesting. Certainly a card that will get played in decks with Seething Songs and Wheel of Fortune style cards. Less sure it will be useful enough to make it in my cube but close enough for a bit of a test. When you slap two different decent enough cards together on a modal card the value jumps quite impressively. 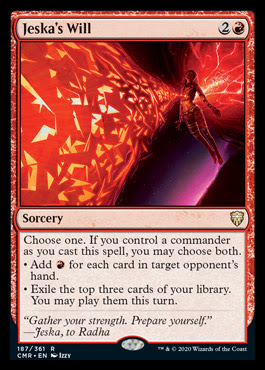 Looks interesting and has cool design but sadly does nothing at all in commanderless formats. Salvage Titan meets Hollow One meets Delraich meets Greater Gargadon! You can use this to sac things or you can just have a very cheap threat in a deck where you are making sacrifices to other things. A lovely card to pair with treasure for sure. Probably a little narrow for drafting cubes but well worth looking into when supported. Trample makes this not just a big dork but a relevant one and thus worth playing when supported well even if a little off theme. 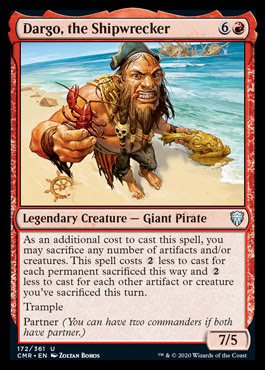 Situational and overcost for a card draw engine which is all this can really be used for. 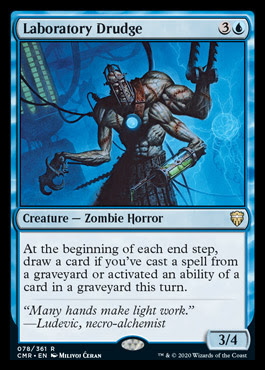 It costs 0 mana, it will have uses! We shall call this the red Ornithopter. Mox Amber stock increases. Only playable when you have synergies but there are potentially loads of those, just not ones you can draft in most normal cubes. 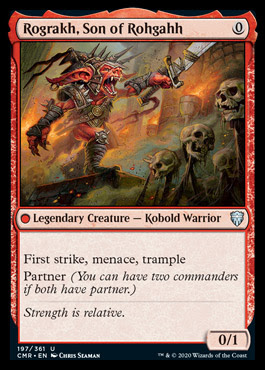 This turns a wide array of cards into Ancestral Recall! Much as this looks like a massive pile of fun I can't see it ever being correct to run this in cube play. Either over ongoing draw effects like Consecrated Sphinx or just one hit fliers like Master of Winds and Cavalier of Gales. Eligeth is just too reliant on other cards and too slow to take effect. 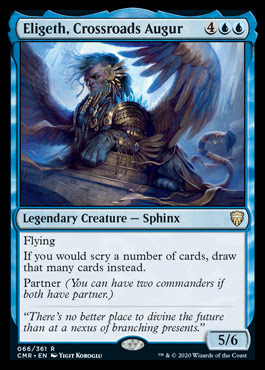