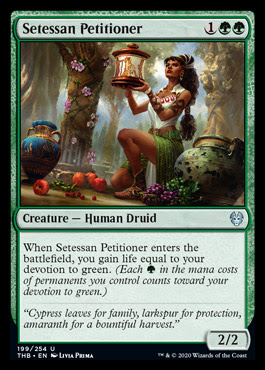 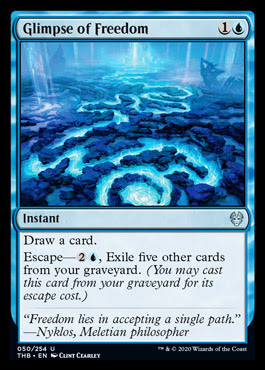 I wish this was a touch better than it is but sadly it just looks like a poor Think Twice. Exiling five is extreme. One of the few nice things about Think Twice is that it baits people into poor action against reactive decks as they know doing nothing against open mana and a Think Twice in the bin leads to them falling a bit behind. Glimpse doesn't do that as you can't exile five cards early in the game often at all. You have to have exiled 10 cards before this has done something more than Think Twice as well. Pretty savage. Blue likes to have cards in the bin for things like Snapcaster or some actually good draw spells like Treasure Cruise. This just asks too much for way too little return. 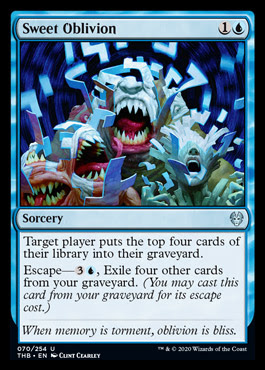 This has much the same problem as the previous Glimpse. It isn't very mana efficient and the escape costs are extreme. You are not using this on yourself with the escape as you are required to consume the resource you generate. It is like a terrible looting for the graveyard effect. I just want to add to my yard, not filter it thanks. I'm unlikely to use this on others either with their simply being many better alternatives. Perhaps as a one off in some bad constructed mill deck but even that seems far fetched. 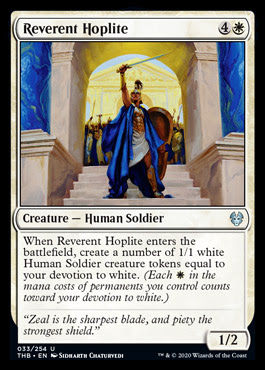 This has some serious potential. It might well even have an average performance above something like a Cloudgoat Ranger or Angel of Invention. The issue is that it is both inconsistent and bland. All you get with this is bodies. Mostly that is what you want but the extra bits you get with most one man armies do tend to make a big impact. Army in a can cards want to be good at recovering a losing position and this is where the Hoplite falls down most. If you just get the 1 token then you just paid 250%  what you should have done! All told white is one of the better devotion colours and so getting more than three tokens with this, even on a board with no other creatures on it, would be both common and very powerful. An Oblivion Ring card, an Anthem and a planeswalker would usually afford five tokens, for 12/13 total power given the Anthem! So while this might have the highest average power due to some silly scaling you are mostly concerned with things like floor performance, reach, and reliability with your top end creatures and on that front Hoplite is rather bad. I will play it in my constructed devotion decks but not in my drafting cube. 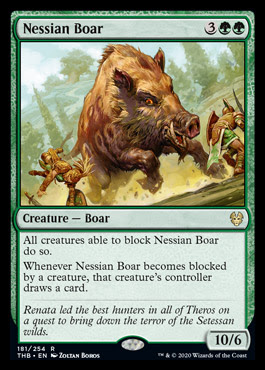 This seems actively bad to me. It is one of those cards that could actually be amazing so worth watching. Mostly it seems like a great way to give your opponents cards. Perhaps it is a great way to give them tempo as they answer your 5 mana do nothing with a two mana spell or a planeswalker activation. Best case scenario this is a 5 mana Wrath with a one turn delay that gives the opponent a card for each creature killed. I guess you could argue that best case was being able to kill a couple of medium sized dorks one at a time but lets be real, this gives way too much control to your opponent. They are not going to get buggered by this most of the time. Obviously the huge statline begs this card to be paired with things that give trample or haste. Those help to stop this sucking and might even make it good. 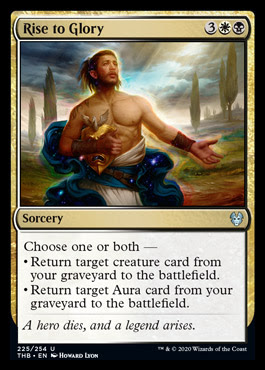 Expensive, gold, and super niche. If you are bringing something back from the bin you really shouldn't need an aura to help with that, even if it is a disruptive one rather than a buff. 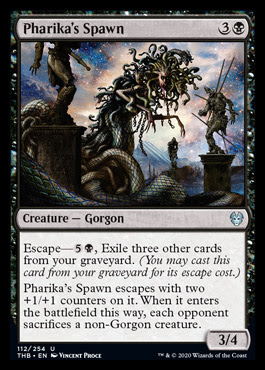 The escape part of this card is nice but sadly the front end is unplayable which rather ruins the package. 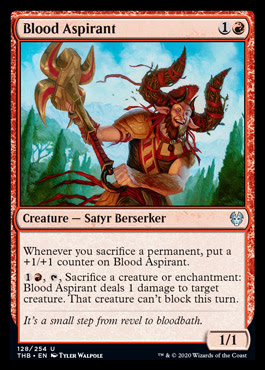 This might do too much not to be good. It is pretty easy to grow this thing fast in cube. Absolutely this card will see some play just based on the growing effect alone. The second effect is pretty wild. It triggers the growth which is nice. It does damage and prevents blocking. It sacrifices enchantments! I will play it for that alone in some places. Aggressive Mining certainly has a new buddy! Sadly the floor is low. A two mana 1/1 with a two mana and tap ability that does less than a one mana spell... ouch. Even so, too much potential with too many other good things not to get there I expect. 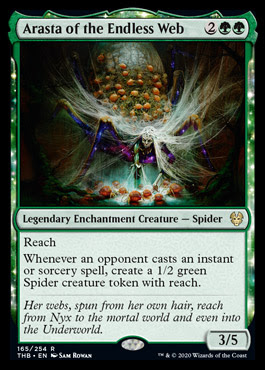 Arasta of the Endless Web 5

Sadly this is very polar. Some decks will ignore this for the glorified Giant Spider it is. Others will get utterly wrecked by it. A removal effect on a planeswalker or creature and the Arasta player is very behind. A clean Doom Blade style effect and the deal is pretty even. Lose a couple of mana, get a spider token, fine. It is when you have to toss a couple of spells at it, like a couple of burn spells or some dig and draw to find an answer. I think that sadly for Arasta the latter mode will be fairly rare and the first two will be pretty common. Even just leaving her in play and working around a 3/5 with reach while not using instants or sorceries is not that much of a trail for a lot of decks. Obviously this will happen a lot too. Overall you have some minor chances of big payoff and some reasonable chances of getting blown out. Especially given Arasta is an enchantment and dies to things like Vivien Ried. I do like this card and want it to be good but it is not looking to likely. I will at least get to play it in some enchantment themed decks as it is close on power, that extra bit of synergy will be enough for her to be good in a few quirky decks. 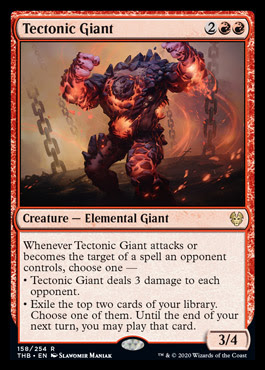 This is an odd card but it does look decent. Although it technically doesn't do anything the turn you make it what with lacking an EtB or haste the fact it triggers if targetted means that it mostly does. Only 187 dorks and planeswalkers really ruin the day of this Giant. A 3/4 for 4 is bad but still besting most things in combat. Getting to Lava Spike or weird red Sleight of Hand every turn is great. Lots of potential value or some rapid game ending damage. This makes me think of Meren of Clan Nel Toth. OK sized body that just generates value. Rankle a bit too. Worse than both but not so much that it doesn't have some hope in cube. Test worthy at the very least. 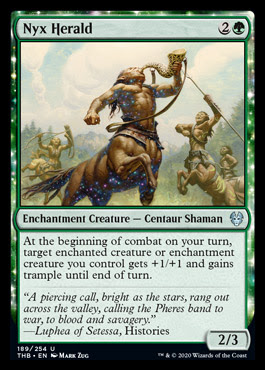 Not a cube card due to being so narrow. I suspect the bland and non-scaling nature of this narrowness means it wont even see play in an aggressive enchantment themed deck which is the one place it would be good. 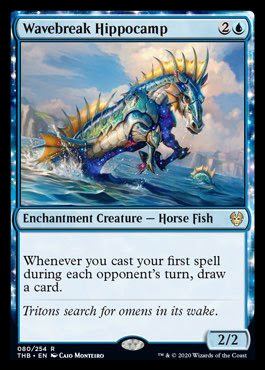 Another fairly polar card. If you can get this out and then sit behind some counter magic and a bit of instant dig/draw then you are going to crush. If not then you probably made yourself vulnerable to develop the position of a Grey Ogre. This dies to everything. It isn't even all that cheap in the grand scheme of things. Not like you can wait to five and deploy this with counter backup. It really wanted to be a 1/3 with flash, then it might have been pretty naughty card draw. As it stands I can't see it getting working into draft builds or even that many constructed ones. The upside of opponents just not being able to answer or punish you playing this are pretty extreme. It has a dash of the Monastery Mentor about it although obviously rather less potent. 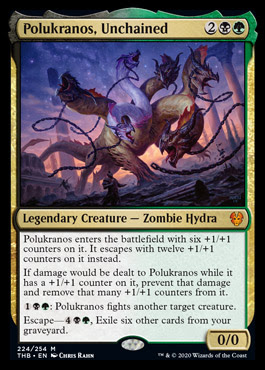 This is probably better than the original but then it is also gold so needs to be significantly better to be getting into the cube. This does some powerful things but it is also pretty clunky. No evasion makes the large size less impressive although the ability to fight a way through blockers is quite a help here. Sadly the shrinking so fast in doing so negates the size so all in all I think I would prefer a 5/5. Mitigating things like lifelink and deathtouch are cute but they don't make up for shrinking either. So what is this card really doing? It feels more like a Profane Procession than any other card although certainly better due to the high tempo Polukranos affords. Being a 4 mana 6/6 is pretty good, especially when compared to a 3 mana do nothing enchantment. Also only costing three to activate removal mode as opposed to five makes Polukranos better again, even if the removal effect isn't quite as impressive. Fighting as a 3/3 gets most stuff so you can do some reasonable work reliably and often. Board control, mana sink and late game value are what this dork offers. He is a threat in so much as he can eventually clear a board and start swinging and that he can come back. Even so, that is a lot of mana and cards exiled from the bin. To kill six 3/3 dorks is a hefty 28 mana. Killing nine 2/2s takes you to 37. Most decks won't be able to output that kind of mana or could find better ways to employ it. Despite all my misgivings about it being slow and clunky I suspect it is probably pretty good. Just being able to flop out a 6/6 for 4 mana will force action, then being able to do a 12/12 later down the line will close a lot of games. That is huge, it will wipe out a board or failing that, kill stupidly fast. Polukranos Unchained does a good job of both posing questions and answering things. His main failing is in the face of exile removal. His second is being gold. His third is his shrinking mechanic but I guess he needs that to be at all fair. While very potent I fear the overall package is just a bit too awkward to shine in cube settings.