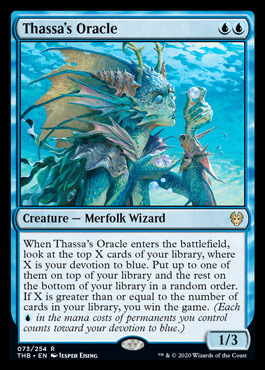 Well this does scale well with small libraries. I can legitimately see this winning a lot of games in my cube and also doing some good work to power up card draw. You actually couldn't go that nuts on draw effects in my cube as you will wind up decking yourself or at the very least being too light on threats and answers total. Often you have to pack reshuffle mechanics just to protect against these things. Well, now you can just pack this instead. I think you could legitimately run this in your cube and throw in Jace, Wielder of Mysteries and have them be yoru primary blue win conditions. Draw all the cards and survive, very blue and on theme. Most control decks either need a high threat density or a really serious card like Ugin8 or The Promised End but now we have this option. Thassa's Oracle is perfectly decent when it is not winning the game too. At worst it is a Sleight of Hand with the card draw bit replaced with a 1/3 body. A 1/3 for a blue is an OK defensive play and Sleight is a nice little way to get setup. Often this will do more than a Wall of Omens as a turn two stall play. I think this might well have more effect on the broad archetype of blue control than most other cards we have seen. I don't think it is broken or anything, power wise it is just fine. It is about what it lets you do with your deck. A lot of the time it is just a slightly weaker Omenspeaker which is a card that is too weak for cube. Luckily the ceiling of winning the game is so far from what Omenspeaker has as a ceiling that even though it is not going to be an abundant event will bring the average performance of the card up pretty significantly. This is so so much better than Laboratory Maniac that it is comic. It costs 1 less, has 1 more toughness, does useful things before being a win condition and is a win condition both sooner in game progress and sooner upon being deployed. Maniac saw play and is pretty bad, this will mostly replace it and incentivize more of such things. 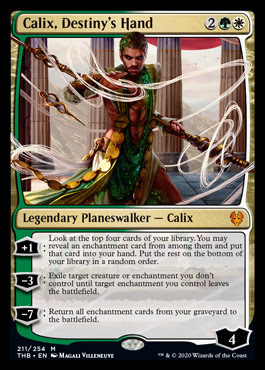 Well then. They finally printed an awful planeswalker! It has been a mad time with walkers recently with mental power creep on the go. Calix doesn't seem just narrow or just a bit fair, he just straight up seems awful. The +1 is super narrow, it sees too few cards and hits far too few things. You certainly can't play this in cube, it is only really viable in decks with like a third enchantments. The second ability needs you to have a target enchantment in play to even work. Horrendous. Like, if it made an Oblivion Ring I would be down with it but turning something you have to have already is comically bad and risky. Just a very narrow, situational and low power card I don't expect to ever play. You could have the +1 find lands and see 5 cards deep. You could make the -3 an Oblivion Ring token maker or make it -2 loyalty and even have him start at 5 at that point. You could basically add on more to this than you need to take away from Oko to make him fair and Calix still wouldn't really get there. 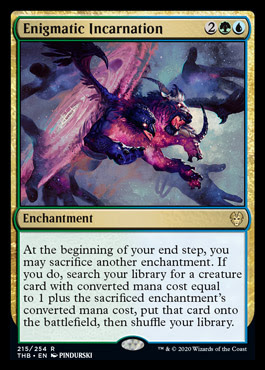 An interesting take on a Birthing Pod style of card. They both swap out permanents for bigger ones. They both cost around the same to deploy and they both go at a similar pace if unaided. This cannot be abused by untap effects and it is gold and it needs enchantments as fuel rather than dorks. Now you can obviously just go from enchantment creature to enchantment creature but that vastly limits your options and leads to a narrow and low powered affair. Not doing so still leads to a pretty narrow deck as you need a lot of enchantment fuel to make it worthwhile. There are some lovely things like the Oaths and Omen cards that are mostly just about the EtB trigger. I think this is very powerful and could well do some serious work in standard or pioneer. For limited settings it is in need of too much support and for being too narrow. For most singleton constructed settings it is quite a lot of work to build around without anything else much like it. You can toss one into an enchantment deck to dig up the odd support dork like Enchantresses but it will not be the main theme of the deck. I like it and think it will be better with time but for now it is not really a card for me to do much with. 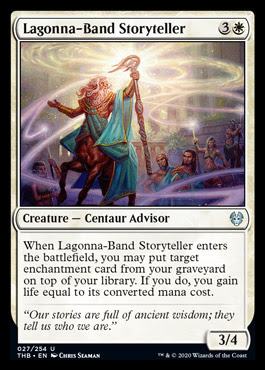 There are just cheaper and more effective means to get back enchantments or to gain life. The situation where you need both are basically non-existent. EDH might stretch to this just for some deep redundancy on such things, standard might due to lack of alternatives on recursion. Broadly though this is just clunky and weak. 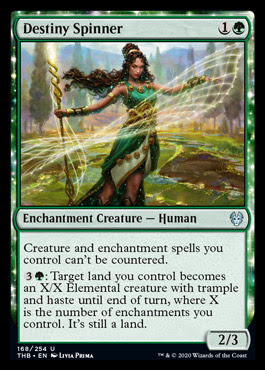 This sits roughly at the power level of Sylvan Advocate or Thorn Elemental which used to be a great place to be. Sadly for these cards they all became too low impact over the course of the last year. The cards are all great but without an aggressive green archetype that wants them there is little reason to run them. They are too vulnerable to mass removal for midrange decks to get behind them that much. Sure, they are decent against aggro but only marginally. A Wall of Omens is better against aggro and often comically against control too. The Spinner does specifically have anti control abilities but the activated ability is going to scale too poorly in draft to get excited about. If this averaged 3/3 land animations then it would be great. It will be a lot closer to a 2/2 land as things stand in my cube which is not enough at all. I like this card, it will see a bunch of play in a bunch of places but right now in the draft cube is a no go, all be it only just. Hero of the Pride 2

Some redundancy for heroic decks with a go wide lean. Not exactly powerful but on-theme and cheap with the scaling it needs to perform. 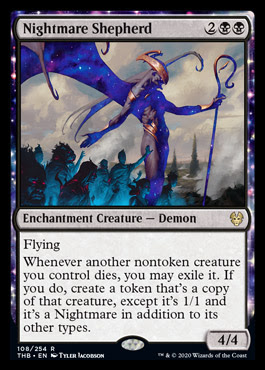 This seems pretty powerful if a little slow. The 4/4 flying body for 4 is a pretty good start. The ability is fine too. The exile aspect is a shame but it is not a disaster and is a may effect overall meaning you are never going to be wreaked by the exile aspect. Mostly this will be dealt with promptly as it is a threat on its own and will generate value over time. It reminds me a little of Kalitas and a little of Shalai, Voice of Plenty. The Shepherd is not as disruptive as either but it can do some naughty things with EtB dorks and sac outlets and all sorts really. This card is probably just too good all round not to do some work in cube. It might be a bit aimless and slow to fully become a mainstay but I suspect it is one of those cards that is only ever cut for space reasons rather than under performing. 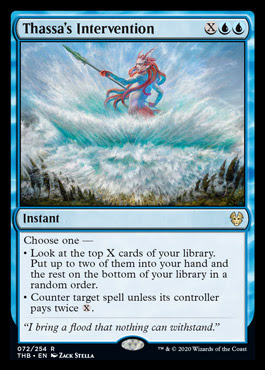 This is a fascinating card. It reminds me of Supreme Will. It scales up rather better but is significantly worse throughout the early game and into the mid. Supreme Will is the option on one of two good cards for one more mana than they otherwise are. Normally this isn't a great deal but it is the perfect control pairing, countermagic or dig. It is the option you always want and that is what Thassa's Intervention does. Thassa's Intervention is slightly lower power at the more key mana costs. Mana Leak and Impulse are rather better cards than Quench or Divination and remain so with an added mana. Beyond that however Intervention scales towards an increasingly hard counter and towards Drawn from Dreams. All in all this seems to have enough versatility and scaling to make up for the shaky start it has. It is not exact;y powerful but it is what you want and good enough. 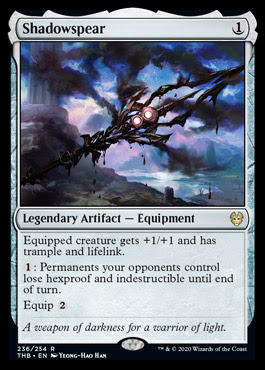 This seems pretty pushed. The equipment side of things are fine, it is a little Armadillo Cloak. It is some size, some evasion, and some life to make racing hard. It might make the cut with just that, it is a little boring but it is cheap, versatile, and a tried and tested effective combination of stuff. It is the activated ability that pushes this card from the fine to the great. Plenty of really strong and tedious cards have indestructible or hexproof in cube and this does a fine job of handling them. It will not happen super often as there are perhaps 10 or so of each but they are high impact cards. Much as this is great against the gods it does fail rather in the face of The Scarab God. 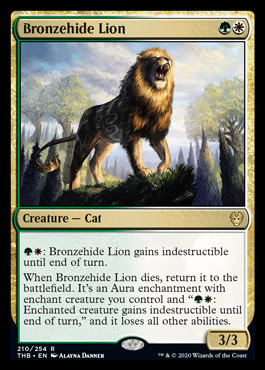 Certainly a very powerful card. A call back to the Licid dorks of old. Much like Fleecemane Lion this is a very pushed Watchwolf and much like Fleecemane I expect this to see very little cube action. This is mainly a small beater. The ability is expensive just to save a 3/3. The card doesn't really die into value either as you still just have an expensive regenerate type effect. That you need a target in play to use on. I almost just prefer the fact it comes back as an enchantment. I do like to go on about two in one cards on the cheap! Mostly this is Watchwolf and that is exactly the sort of card that is of no interest to anyone in cube these days. Gold, low nominal power, no real value. Lots of power for the mana but just not in a way I want it. 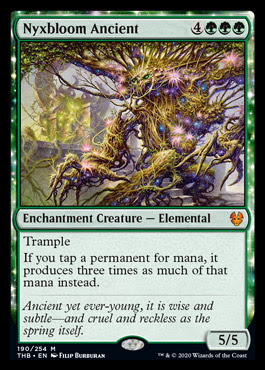 This is a little over the top. The body is perhaps just a drawback on this thing too. It is not really a threat, if you play this it is for the effect. Mostly there are just better and more consistent ways to ramp but this is certainly interesting and unique and offers a bunch of infinite mana combos! A little over the top when you need 7 to get this out and then it triples that. The difference between 21 mana and infinite is not all that big in magic.... 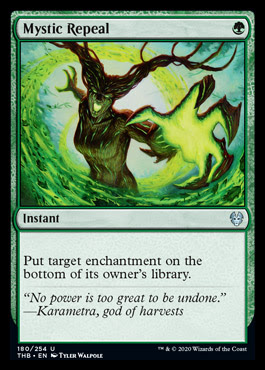 Just a very cheap efficient removal spell that will shine within the block as it were. That means it might be good for standard and will possibly be sideboard tech for pioneer. This is basically just Oxidize for enchantments. Better in some ways as it is more like exile removal. Efficient answers always see action so yeah, not much to it than that. Good, all be it uninteresting and a little narrow for draft cubes.