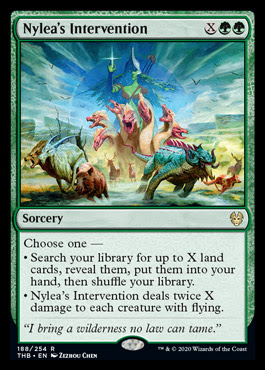 Interesting card. Able to tutor for both parts of a Stage / Depths combo for just four mana! Most decks do not want scaling land tutors but in any that do this is pretty excellent. It is passable at X = 1 and quickly gets better. It also has a nice built in mass air control mode which is situational but very powerful when you need it. You can't really play things like that on their own and so it is doubly nice when you find them on modal cards you might otherwise play. Sadly this is a bit too slow and not really a card with an obvious home in cube as it presently stands. Feels harsh rating it so low as it is unique, potent, and interesting. 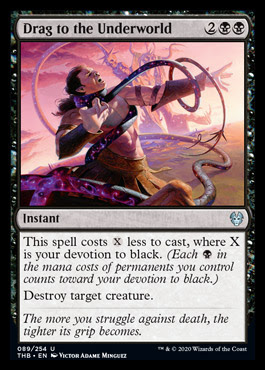 Drag to the Underworld 6

This is the closest to Terminate we have yet had in black. The card is decent, the floor is passable and the ceiling is great and easily met. Two things I don't like about this; The more controlling your deck is the weaker this gets. There are just plenty of archetypes where this is worse than Doom Blade. The second gripe I have with this is simply that it isn't a broad removal spell. These days you really want your removal hitting both walkers and creatures. All the Doom Blade cards are really out of favour at present and see barely any play. This feels like it will suffer the same fate but worse due to being weaker in lighter black decks and less board developing decks. Sure, this is the best Doom Blade in a few archetypes but that isn't bringing the average performance up enough and that is what it is all about. 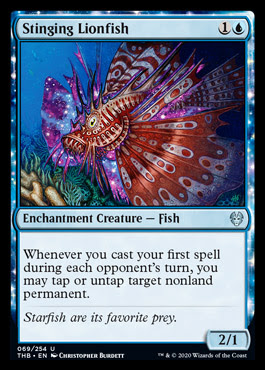 Cheap and offering a pile of synergies. Also fairly fragile, low powered and needy in terms of things it works well enough with to be a consideration. Unlikely to see all that much play but interesting and potentially useful. 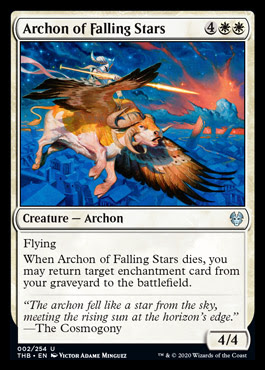 A bit expensive to use as a means to cheat enchantments into play.... Other than that, utterly useless. 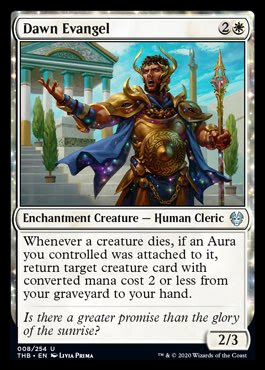 Low floor and too much setup. Have a thing on a thing and another specific kind of thing in the bin and then have that first thing die all while Dawn Evangel sits in play like a mug. We have better things to do with enchantment themes and auras. I doubt I'll ever play this, I am only rating it at all because bodies that are enchantments feel hard to rule out while there are still so few of them. 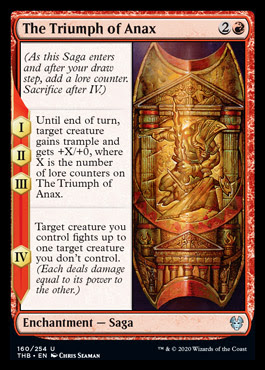 The Triumph of Anax 0

This seems slow and unreliable. Yes, a +6/+0, trample and fight are worth 3 mana, but the spreading out of these effects makes them vastly lower tempo and much harder to get value out of. I can't see this working out in any singleton, cube, or really even 60 card constructed deck. 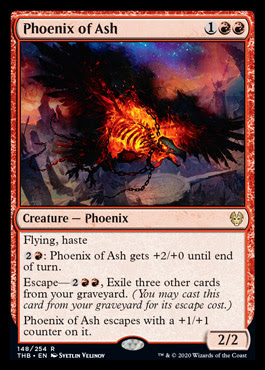 While very much in the same bracket as Chandra's Phoenix and Flamewake Phoenix I think this is the most rounded and highest power level of the three. This is the least demanding on specific kinds of cards to recur and is the best while in play. Being a bit firebreathing and sometimes being a 3/3 make this far more threatening and more useful in combat. The exile cost of cards is fairly low and while it is not a mana cheat it that much more worth it due to the higher value of having it in play when compared to the other two. Chandra's Phoenix lasted a long time in cube and I think this will do a reasonable job of picking up where it left off. The card this is really now competing with is Rekindling Phoenix. This is much more resource intense but it is also much harder to deal with and much more threatening. Much as these things are great having a zero mana recursion is amazing when working that way. 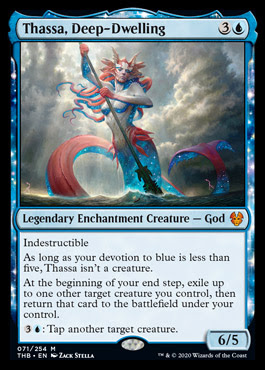 I am not a fan of this at all. The cost to tap down is pretty obscene and is really only super late game or in desperate times as far as cube play will go. The body is much the same as the others, just hard to get excited by something so easily chumped or handled, especially when it is not a dork most of the time. Really this comes down to do you want a flicker each turn enough to invest in a four mana card? I would much rather something that did other things too like Brago or Venser but this is at least single colour and hard to remove. EDH and powered down cubes love flicker effects and will likely welcome this gladly. As far as more powerful cubes go this is terrible tempo, inconsistent, and low powered. 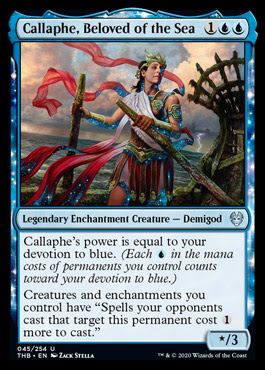 Callaphe, Beloved of the Sea 3

This could be fairly punchy as far as a blue aggressive card goes. Lack of evasion or something to support or scale with the high power detracts from this a lot but I guess we have things like original Thassa and Whirler Rogue to help there. Dungrove Elder does not get much love and so things are not looking good for this on that basis. Blue doesn't really do making fat ground pounders and so this has no obvious cards you would pair it with as far as builds go. Playing it as an enchantment synergy card is also going to wind up being a bit at odds with what Callaphe does. Potent but a bit off kilter. 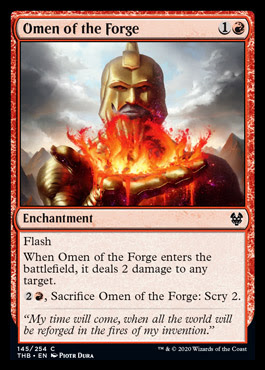 Omen of the Forge 3

Eek, this makes Magma Jet look good and Magma Jet is wildly overrated. I am only ever playing this if I need things in play, devotion, or enchantments in my deck. Very low power card indeed although doing clean useful things like damage and scry while being housed in an unusual package keep it playable. 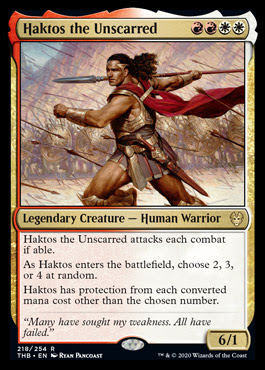 Sort of a True Name Nemesis. Better in that you have some hope of interacting with it but much worse in that it is super hard to cast, very poor on defense, and just not that good. Every now and again you will get lucky and you will just win with your 6/1 protection from everything your opponent had. Mostly you will spend 4 mana on a 1 toughness dork that dies easily, willingly, and affords you little choice in its doings. Funny card but seemingly awful from several perspectives. 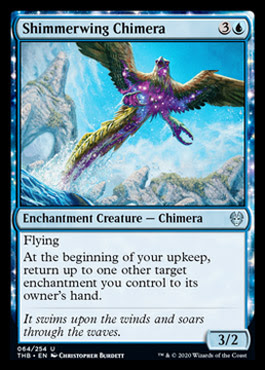 No doubt some nice things you can do with this but all too slow, vulnerable and needy to be good at cube level. A booster draft limited card only, all be it a nutty one with things like the Omen cycle for it to bounce. 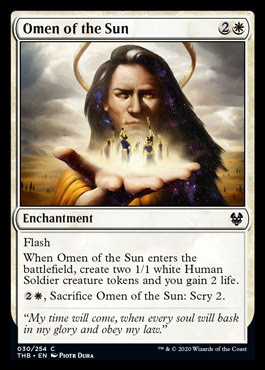 Omen of the Sun 4

This I will need to test but my gut is that it is a no for drafting cubes. Really it is a bad Raise the Alarm with a bunch of minor things bolted on, all of which combine in failing to make up for the extra cost over Raise. It adds a devotion... gets you closer to the city's blessing? It makes humans for the few synergies on offer there. It can scry at a pretty hefty rate. It can assist with flicker or enchantment synergies. Certainly a lot going on for a Raise the Alarm and certainly enough that it will see play in a pile of specific places. The drafting cube just feels like it probably isn't going to be that place. Servo Exhibition didn't last and it is not exactly like Raise the Alarm is a powerful card. 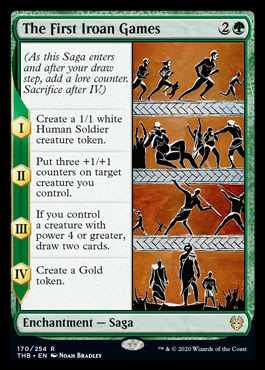 Well this is one of the most stuff in a card I have seen in a long time, perhaps ever. If this all works out as intended you get 4/4 worth of stats and draw two cards for a mere 2 mana total. That is madness. That puts Ancestral Recall to shame. Luckily the card is framed in such a way that it is probably pretty fair. Like Ancestral Visions this takes many turns to do the things and is immediately a lot fairer than the sum of it's parts looks like. The Gold token being the last thing you get makes it about as low value as it can be. The single mana back three turns after you invest your three upfront is unlikely to do all that much. There is a good chance it does more as a thing in play empowering other cards by that point! There is a bit of a house of cards feel to this saga too. If you make it on an empty board you have to keep the 1/1 alive in order that the second phase does anything. If it is killed off in this instance you not only waste most of the stats this card offers but you stand to miss the card draw as well unless you can play a 4 or more power dork from hand that turn which is not dealt with. Missing either of phase 2 or 3 is savage and turns the card from amazing to merely OK. Missing both makes the card awful. Playing this, baiting a removal spell out on the 1/1 and just getting a Gold token is reasonably the floor of this saga which I guess is higher than the floor of plenty of cube cards. Given what the ceiling is I think there is a pretty decent chance this is a good card. Most of the time you will make it once you have a little bit more going on, perhaps a couple of dorks or a planeswalker able to make dorks. At the very least a man land able to take the counters and be that 4 power dork for phase 3. Sometimes you will have Walking Ballista for the counters and feel amazing! Mostly this card will give out the things it offers, it will just be slow and a little awkward about doing so and that is what will keep it in the fair but good range.