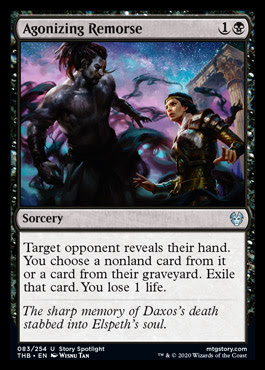 Probably the best two mana Thoughtsieze option although very close. Exile is powerful. Being able to take a card out of the bin can be handy. Losing a life is not a big deal even if it is not close to making up for the mana cost difference to Thoughtsieze! If black wants a two mana hand pure hitter in cube this will be it but I expect the more versatile offerings of Collective Brutality and Kitesail Freebooter will appeal more. Certainly worth a test though. Probably a big deal for standard and pioneer as it stands. 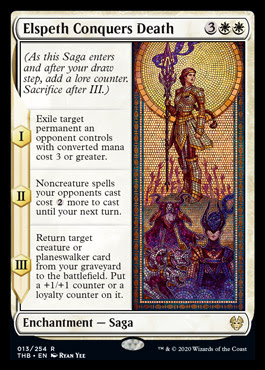 This seems outstanding. The Eldest Reborn is a big deal in cube and this is highly comparable. Phase I here is just exceptional. It deals with any serious problem card as effectively as possible. Almost any planeswalker is gone forever! Of the things you want an Utter End quality card to hit 95+% of them have CMC three or more. Phase II is no value but it does calm things down nicely. It gives you a window to get past counter magic, it makes it hard for your opponent to deploy more walkers or deal with the saga. The final phase is big value, or should be. While not as versatile as the final stage of Eldest Reborn as it only hits things in your bin the extra counters help make up for that a bit. Overall this is far better removal and control than Eldest Reborn at the cost of being slightly less value and having a slightly lower ceiling. 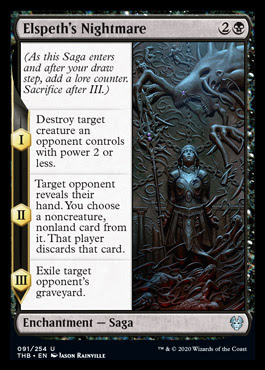 In my cube this hits just over 70% of dorks with the phase I removal, in the average cube that is around 3% lower at just over 67% of the things. This is likely to be reduced in practice with plenty of buffs and things putting dorks out of reach. I wouldn't be shocked if this was aimed at a token a lot of the time. Ultimately how playable this card is comes down to if that figure is enough. If deployed early you should hit reasonably well with phase 1 and that is a big plus for the card. Duress in Phase II is nice but a turns delay on a three mana play is quite slow. It can be played around or simply outpaced much of the time. Phase III is just a little sweetener, it is OK but nothing too exciting. It hurts a few things a bunch and is pretty irrelevant to everything else.

On individual cards you could do more for the mana than this saga however that would set you back a few more cards. This should be a two for one and could be argued as more when phase III is also a hit. When you take that into account you are getting a much better deal. Duress for a mana, removal spell for a mana, and draw a card for a mana. All quite reasonable. It is not even a disaster of a card if one of the first two modes miss assuming the other hits good which is pretty plausible. All told I expect this to do OK in cube, perhaps even well. It is going to sit somewhere around Doomfall with a ceiling much nearer that of Kolaghan's Command. 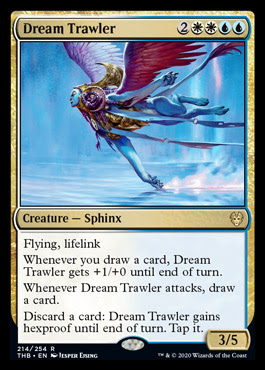 Somewhere between Prognostic Sphinx and Dragonlord Ojutai we find this thing. Good as a threat in that it races well, generates value in cards and life, all while being fairly robust itself. Five lifelinking evasive power on offense gets the job done in good order, and safely. I significantly prefer this to either Aetherling or Consecrated Sphinx. It is neither as safe or assured as Aetherling nor as much card advantage as Sphinx but it does everything else better than either. I also prefer it to both Prognostic and Ojutai. It simply does a lot more than the former and works rather better with itself than Ojutai even if they are very close in power. It is rather gold and colour intense but it is also on theme sufficient to at least merit testing. 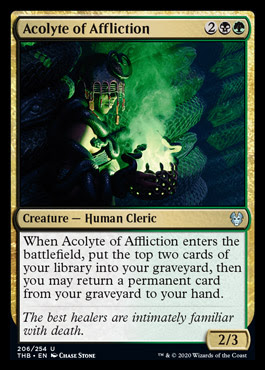 This is pretty good. It is a two for one with some other perks. Self mill is usually decent. Sadly this is a bit far up the curve for a bit of value or support. The body is not all that impressive or exciting. Mostly this is a more expensive and less flexible Eternal Witness that is gold. I can't see this cutting it in cube although it is a strong card. 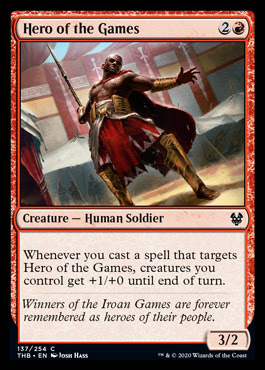 Hero of the Games 0

Much as I gave the white Bear version of this a pass I don't see it here. The body is so limp and the cost is too much. Power wise this lines up so badly to three drops and the synergy potential doesn't make up for it. Especially when you have high power synergy options like Feather the Redeemed competing as well as just conventional powerful three drops. 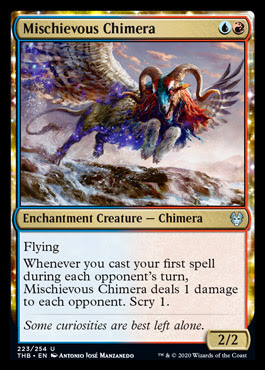 A potent little tempo dork that kind of does everything you want. It is cheap to get down and likely gets a lot done. Flying makes combat good for it and the spell trigger lets you force through some damage even when not attacking. Scry is just also nicely on theme with Izzet tempo builds. Much as this is a lot of card that is impressively on theme I can't see me wanting it in cube drafts. Just a bit too specific. Certainly I would play it in constructed builds of Izzet tempo but this will not improve a drafting cube. Odd little Clone card. Certainly strong in a deck that can consistently trigger it although a little aimless in most cases. Otherwise pretty garbage. That makes it far too narrow for drafting cubes but there is some potential elsewhere for this and people love a Clone so I expect to see this in places it probably shouldn't be. 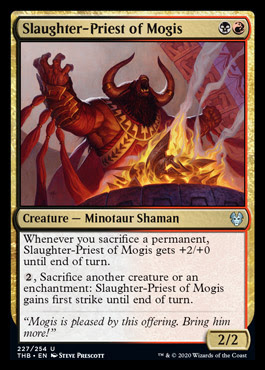 As a sac outlet, even one that deals with enchantments, this is poor. As a combo kill card however it has some mild potential. If you can use something to toss a load of stuff in the bin then this gets pretty big pretty fast. Narrow but also cheap and good potential for scaling. Greater Gargadon seems like a good pairing for this. 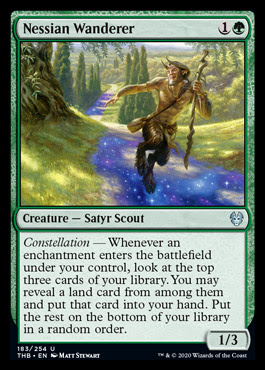 I like this but it might be a tight fit anywhere looking to run such things. Basically are you ever running this over a card which just draws you a card when you play an enchantment? Or, are you ever playing this in a deck where an Argothian Enchantress isn't better first? This has a higher floor but it is still a low one and so ultimately I think this is unlikely to see much if any cube play despite being a decent a potent little dork. Either you are just about drawing cards or you are not bothering with anything like this. The places you can run things like this are just too tight to afford luxuries such as this. Standard this has some hope where you do not have the option on things like Argothian. EDH might as 100 card singleton and multiplayer set a whole new bar for what is playable. 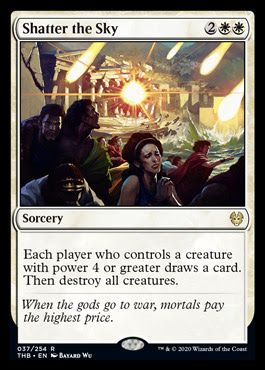 Hmm, a Wrath of God that can be better, can be worse and probably is mostly just the same. Overall when you are using Wrath effects it is much more likely you opponent has a 4 power dork than you do so the average is certainly worse than original Wrath. This is probably still cheap and reliable enough that you are happy to play it, probably over a five mana Wrath too. I think this is just good enough at doing what you want that it will get enough play. Wrath count is a pretty limiting factor on control decks and so more is probably welcome. 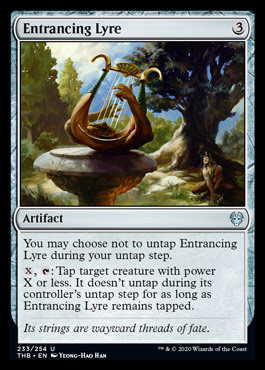 Cool but too expensive I think. Somewhere between Icy Manipulator and Vedalken Shackles but sadly lacking the utility on the former and the brutality on the latter. 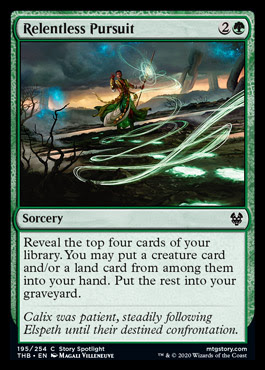 A decent, if pricey, support card. This is Essentially Divination in that it draws 2 for 3 but it fills up the bin and digs a little deeper at the cost of having the ability to wiff and some build preconditions you want to optimize for it. The stars are unlikely to align all that often for this card in cube settings but it is none the less a support card not to be overlooked. 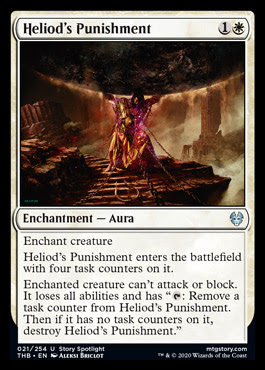 Mostly this is a bad Journey to Nowhere in that it only lasts 3 to 4 turns. The only upside it boasts is that it will not retrigger EtB effects if things go awry. 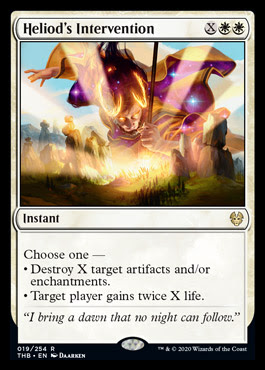 Probably a nice Wish target but otherwise all a bit too slow and narrow. I guess I might use it in a sideboard in which I was very tight on slots for specific things.