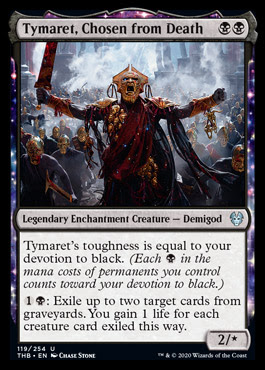 This just looks like a frilly new take on Withered Wretch. Better in most ways but a tiny bit worse at the one thing you play the card for - graveyard disruption. You don't even play Wretch any more for that as they it is too slow and low powered for cube. Tymaret is at least a very sturdy blocker, good source of devotion, and some life gain on top of that disruption potential. All told he does do more than enough on top of Wretch to see play in a rounded sense rather than a targetted one. As far as cube potential goes it is really a matter of build. If your cube supports archetypes where Tymaret is a good fit/counter then he will be good for your cube, if not then he will get little to no play. Very much a card on the line on both power and playability. 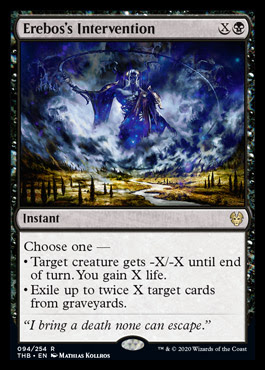 These modal X cards are on the money in that they have a nice general use mode and a narrower mode you cannot otherwise play on a card. That is exactly the form you want your modal cards in for the best results but sadly I fear this is just not good enough power wise or in terms of floor. The removal mode scales well but it pretty poor in the early game and a pretty bad tempo card. It feels like you will often be paying two mana over the cost of the thing you kill for which the life gain is rarely going to compensate. It doesn't really matter how good the narrow mode of the card is if the main mode isn't really there and this doesn't even excite there. Playable but certainly not good. 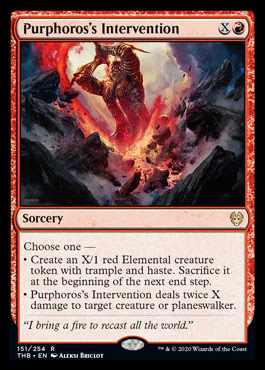 Basically just a Blaze that is better against things and worse against players. Twice X damage to things makes this passable early and scale well enough that it makes up for that sub par early performance. Sadly the best thing about X spells is the ability to reliably do a bunch of face damage and finish a game. This is stopped by so much, from a first striker to a tap effect, that it is a very poor imitation of a Blaze going face. I would either play premium creature removal or a good X spell like Devil's Play over this every time. 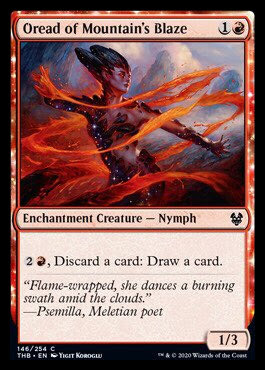 I want to like this but three mana to loot is just unacceptable. If you want a red two mana 1/3 with the enchantment tag then this is your card. If you want a looter, this is not. The former is not impossible but pretty unlikely. 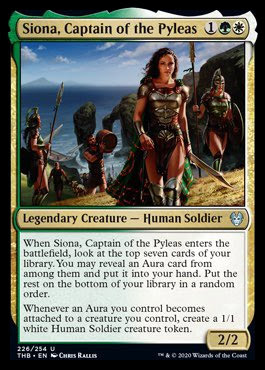 Siona, Captain of the Pyleas 5

There are not enough aura cards in most cubes for this by quite a long way. While this might not be much cop in the limited side of cube in the constructed end of the spectrum this picks up power. In any aura heavy deck this is a great card. It is a 2 for 1 off the bat with a scary body and some ongoing value potential. Imagine if Young Pyromancer cast a Peer Through Depths as well! On top of that there is the infinite combo with Shielded by Faith to churn out as many 1/1 dorks as you like, one of which will be indestructible! Expect to see this in a bunch of places that are not drafting cubes. 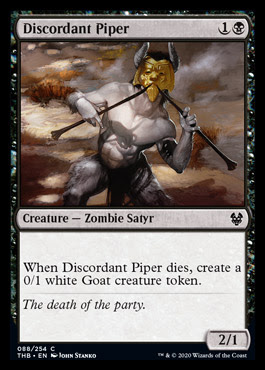 Two bodies in one card for two mana but about as low powered as you can be in that regard while remaining playable. I think we now have enough alternatives to this in black that it isn't making any 40 card lists. EDH decks might use this as fodder. 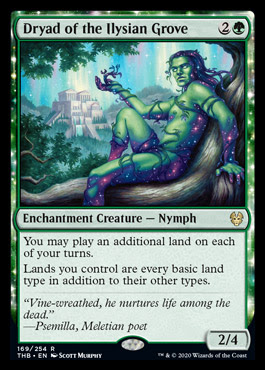 This will certainly see play in enchantment decks and land decks, both primarily to put extra lands into play. In the former it is doubly nice being an enchantment and thus likely drawing you cards itself when made. Those lists have so much draw being able to put out extra lands is pretty profitable. The statline is beefy, especially when compared with Azuza's stats or indeed the % of time active you find a Wayward Swordtooth. Fixing is a nice perk but less nice than the lifegain on Courser of Kruphix which is itself pretty minor and certainly not why the card is played. Just a contributor to its power. Much as this is a great card I am not sure how it will do in cube. Extra land drops on a three drop do not do all that much in most decks. Beyond that this card isn't doing a lot and so probably isn't for drafting cubes although I do expect it to do very well in a range of other formats. 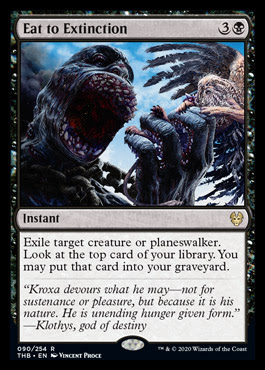 A rework on Vraska's Contempt. Remove a black in the cost and gain a surveil for one at the cost of no longer gaining two life. Overall that sounds like a win for cube. Even if it is not that much more powerful the ease of splashing this makes it vastly more playable. All the other mono black cards that kill planeswalkers are double black to play and so this feels like it is going to do a lot of getting splashed. Removal that hits walkers and dorks is in high demand at present so despite the high mana cost this is looking pretty good ticking all the boxes as best it can. Exile quality, instant speed, without target restrictions or conditionality. 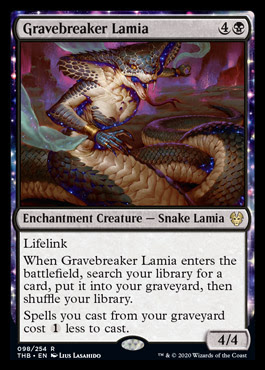 Entomb on 4/4 lifelinking legs with enchantment themes and cost reduction perks. Sadly both Entomb and cost reducers have lost their luster by five mana. You might get a bit of value with the Lamia if you have good recursive cards. I am not getting excited about the 5 mana 4/4 which I might get value from. Goblin Dark-Dwellers are not all that impressive in a cube setting and I fear this will be even less impressive. Useful sometimes but ultimately too slow and low powered to get that much work done. It might crop up doing some somewhat unexpected things in unusual places, it is that sort of card. Can't see it being a big deal any where much though. Not the kind of card to break formats! Most likely home is as a good EDH support card. 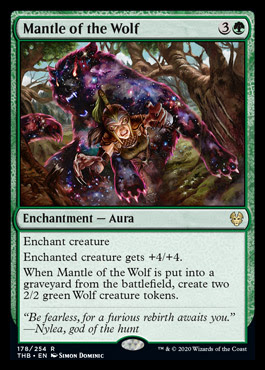 This is a charged up Elephant Guide. You get more stats on both ends which is nice. You get more bodies on the back end and you get a little bit more security on getting those bodies as contingent on the Mantle going to the bin and not the thing it enchants. Much as I like this and think it offers a lot of good pressure I am never going to play a four mana card I need a target for and which can so easily get me wrecked with a high tempo two for one. This is only something I would play in a deck with almost assured protection in some form. Hexproof sounds the most obvious but in such a place you can do rather better than Mantle of the Wolf so perhaps it just doesn't see any cube play. Potent but awkward. 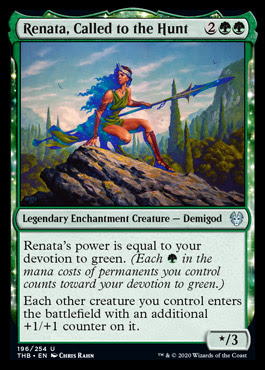 Renata, Called to the Hunt 2

Bleh. High power with no evasion is pretty unexciting. Four mana for 3 toughness and no immediate value is a huge turn off. The counter effect is nice but it is slow and on a card that is both vulnerable and otherwise pretty poor you might as well just run something which is much better and that also does that sort of thing. The Great Henge? Gavony Township? Grumgully? I could go on naming cards for a long time before I found something Renata appealed more than. I'll bet I do play her one day though, she will just somehow tick all the boxes. 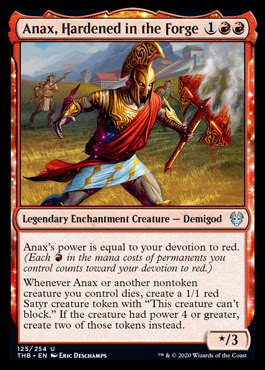 Anax, Hardened in the Forge 7

Now this is a demigod I can get behind. The floor on this is Hurloon Minotaur that dies into a 1/1 that can't block. Hardly good but not shocking, still two bodies in one card. A lot better than the Kraken that is for sure. What is so impressive about Anax is the scaling all over the place. He threatens to give you many bonus dorks making him a high urgency target and really limiting your opponent's sensible options. A bit of a Shalai, Voice of Plenty in that regard. He can do so on command too if you happen to have a sac outlet at the ready. Anax also grows in power pretty sharpish. Being red and relatively cheap means it is far easier to get in attacks than for cards like Renata. As such Anax can easily threaten to hit for a lot of damage. Just curving out with R, 1R, Anax at 1RR, and then a 3R card is Anax at six power. A certain Embercleave is a massive fan of this power! Getting in just one big hit is also a lot more profitable for a red mage than those of other colours. For a last appreciation of the scaling Anax offers let us consider the extra value he offers when in the position of having a Goblin Bombardment and a Purphoros, God of the Forge in play. All our smaller dorks will do three extra damage and the bigger ones six! Just Anax and nothing else in that situation comes in and does 2, sacs to make a pair of dorks for another 2 each on entering and then sacing as well for one a piece resulting in 9 damage! I think Anax is somewhere between Judith, the Scourge Diva and Krenko, Tin Street Kingpin in play and quite possibly power as well.