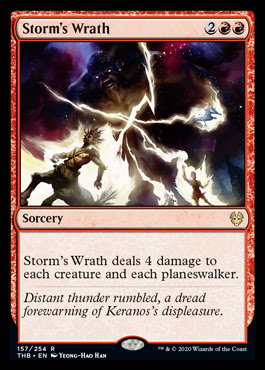 A red take on Languish, a bit worse against dorks but a lot better against planeswalkers. That might be a drawback however as the best way to leverage mass removal in cube typically is with planeswalkers. Really this comes down to meta, does your cube support red midrange and control builds? If so then this probably just makes the cut for being clean, efficient, high power, and most importantly in a CMC / damage output class that it otherwise non-existent. There are plenty of options on X CMC for X-1 dmg and plenty of X for X when X = 3 but none at 4 for 4. It is a pretty nice sweet spot for mass removal in terms of game timing and ideal as a damage output for red with most options on removal being just 2 or 3 damage. I will certainly test this one out. I think it has much better odds of success than Languish and does a lot more for the future of red than most cards. One to keep an eye on even if it makes no immediate waves. 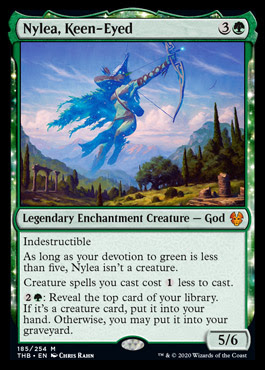 This looks like a clunky Duskwatch Recruiter... Sure, it has both modes active at once and is rather more robust thus giving you access to those modes more reliably. That is not really all that exciting though, cost reducers lose value pretty fast as you go up the curve. Further to that the value mode is much worse on Nylea as you have far lower odds on hitting. Even in a deck with 50% dorks you are paying six mana to draw a card. Any mana you save with the cost reduction will be lost in any value generation you use. The cost reduction also works poorly with devotion as the best devotion cards don't have generic mana in their costs. Even then, a 5/6 dork is not all that much payoff. Good but not game breaking, very much in need of trample. I think this will see some play, and indeed be very good in EDH but for cube it is awkward, under powered, and pretty narrow. 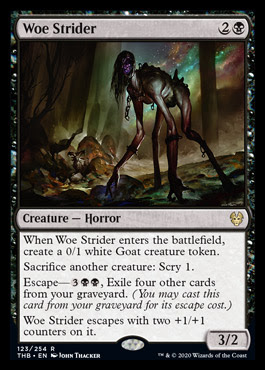 This is arguably worse than a Catacomb Sifter. It is however far better for cube for two reasons. Firstly it is just black making it vastly more playable. Secondly, it is a sacrifice outlet making it an all important enabler for things. Sifter is just a bit of mild payoff while this actually lets you build around synergies a lot more. Basically this is just a sac outlet but it is good because it is on a body that has a decent power level on its own and has a lot of utility to offer. The escape makes Strider a more relevant threat and a much more dependable sac outlet. The rest all just goes nicely with giving you options and support for whatever. This can comfortably replace cards like Yahenni. He is fine but situational and narrow. Yahenni might be better in some cases but Strider is far better on average. 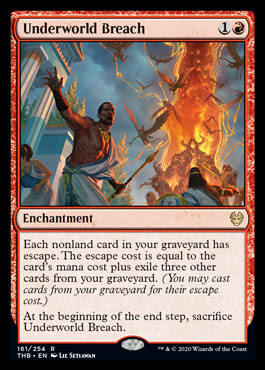 Well now this is a scary card and no mistake. Right off the bat I can think of multiple abuses for this. Stitcher's Supplier and Phyrexian Altar. Mesmeric Orb and Frantic Search. Burning Inquiry and? Rituals and? Very much a card to watch for combo potential all over the place. It is also pretty much a fine card just to run in a lot of normal decks. It is part Past in Flames/Yawgmoth's Will, part Mission Briefing and part Treasure Cruise. Just running it out late game and playing two or three Lightning Bolts will be amazing. It is a bit on the late side and fairly hard to make work early. It also gets in the way of other cards that want to make use of the bin. It is not a lock in for cube by any means but it has a lot of potential there as well as all the potential it has elsewhere! In a normal setting this card is fair but has nice scaling and nice synergy and utility potential. It is very clear from this card that the value of cards in the bin is being narrowed and solidified as a resource in this set. Underworld Breach pretty much says that the value of a card in the bin is worth a third of a card, a third of a Regrowth to be precise! Overall I would day it is somewhere between a fifth and a third of a card of value per card milled. With that in mind we can start to appreciate the power of things like Grisly Salvage a lot more broadly. This certainly puts a premium on filling up the bin. 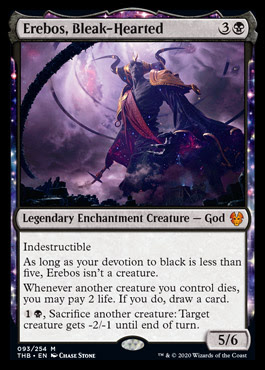 Sadly this just seems like a much worse version of Yawgmoth. Erebos is more expensive to use in both life and mana and has less effectiveness and utility. All Erebos does better is survive and potentially beatdown. The latter is unreliable and not overly in tune with the card although it is a lot of damage! Being able to clear out all the chaff does help mitigate his lack of evasion. Erebos also technically protects your stuff better than Yawgmoth as you can draw cards from dorks when they die in combat or to other sac outlets rather than just using them to shrink stuff. Two life adds up fast though and is not a long term thing. The removal is limp as well as the effect is only until end of turn making it poor against anything big. This seems playable but not good. It is rather narrow and will only wind up in heavy black Aristocrat style decks which are not top tier. I'll test this but mostly because Yawgmoth is so good and having redundancy on effects you are trying to build around is very useful. Yawgmoth might well carry Erebos and make him see enough play to retain a cube spot. 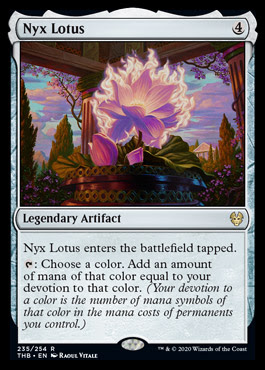 While this does look rather eye opening it is very much a card in the realms of Fires of Invention or Wilderness Reclamation. Just a four drop that is slow but affords huge potential mana returns. When compared to these other current cards the Lotus seems a lot less impressive. You need to power it up with other cards and you need to untap it making it slower and more demanding. While very powerful indeed I suspect it is just a little too over the top and demanding to work out in a limited setting. I suspect it will crop up most often in quirky builds, black devotion and the like. Quirky builds with large mana sinks... 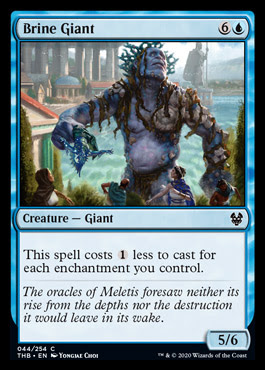 Nice card but very narrow and a bit bland as far as payoff goes. I am not going to the bother of reducing the cost of just a fat dork. Certainly powerful when it does cost a blue but what deck is this exactly? Perhaps the kind of card that will become good a long way down the line. 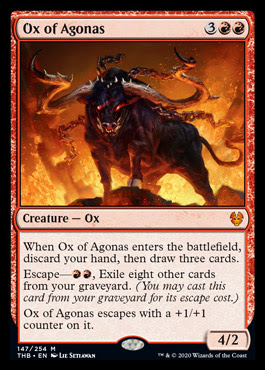 A more rounded iteration of Bedlam Reveler. All told this seems incredibly good. A five mana 4/2 with draw three cards? Yes please. A Treasure Cruise I can play from the bin with a 5/3 tacked on? Absolutely! You don't need to focus so hard on instants and sorceries as you do for Reveler making this far more playable and broader in scope. You also don't need to worry too much about keeping this back in hand making it more convenient with the various random looting, discard and self mill effects that can empower it. All told this seems like a nicely playable top end card for red decks to play. It is less demanding on build than something like an Experimental Frenzy and much more immediate impact than things like Chandra, Fire Artisan or Outpost Siege and the like. It isn't totally busted either, just a nice rounded late game value card in a very red form. Decent tempo but build restrictions will still be somewhat imposed. You don't want too much top end or clag sitting in your hand. Cheap streamlined decks are the place for this to shine brightest. 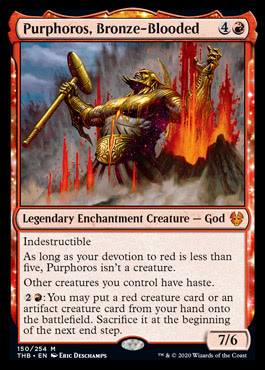 This is an interesting take on Sneak Attack. Increasing the overall cost to Sneak something in by three, one on the cast and two on the activation, is enough to really take the bite out of this as a combo enabler. Further to that you cannot put the big Eldrazi, Griselbrand or Worldspine Wurm in with it either which are most of the best things to Sneak with. Too expensive and situational for general use and too slow and specific for a build around I would say just in terms of the activated ability. As for the other bits of this card and more general use I have even more doubts. Other creatures having haste is nice but on a red five drop it has lost most of it's value. Being a 7/6 indestructible is OK but not all that, it is easy to chump and turn off and is just not that threatening or reliable of a body. Overall I don't expect this iteration of Purph to see much action in cube settings. He is either not doing quite what you want or he is doing nothing at all! 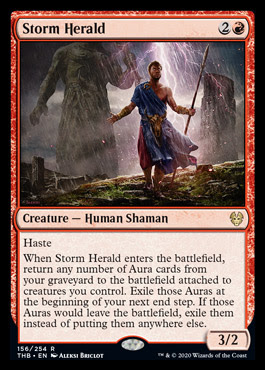 Well now this looks like it just creates a new deck in modern. This, some mill/looting, some Eldrazi Conscription and other massive aura cards, with perhaps some dig, protection and fast mana. Such a thing can win on turn two fairly easily and can be made fairly consistent. Really dangerous combo card and likely has other applications as a synergy tool as well as a combo one. Presently not close to enough auras you want to put on your stuff in drafting cubes for this to be a consideration. Also not really enough redundancy in these kinds of effects for it to be a strong combo card in singleton formats yet either. Still, one to watch. 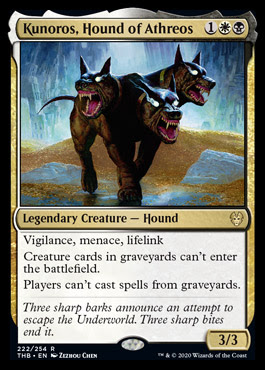 This is just one of those too much text cards. I don't much like it but it has a good shot of being good simply by doing so much. The stats and key words are a big part of that. This is a hard to handle threat being reasonably sized, hard to attack into or block and very hard to race. The hose effect might be annoying depending on what your deck does or what cards you have. Mostly it will be blank but every now and again it will win a game because Snapcaster didn't work or Vryn's Prodigy was curtailed etc. This still has issues like doing nothing right away and being vulnerable to removal. Also obviously gold works against it a lot, more so than usual what with it just being a dork. I don't expect this to last but it does certainly merit testing.