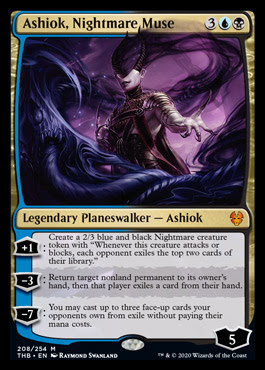 Seems super strong but also needs to be as a gold five drop walker. All the abilities are pretty good. Recoil for -3 is nice, it is value and protection, tempo and control. A 2/3 token at +1 is also decent, especially with the mill clause. You cannot really let those stick about doing stuff in cube if you want to have a deck left. Exile is terrifying for any slow or thin deck. If you only have a few answers or threats exile can be scary regardless of risk of milling to death. This means you will really struggle against Ashiok if your way of dealing with it is based on chump attacks over a couple of turns. This is how most go wide decks tend to take out walkers and it will just be brutal to do against Nightmare Muse. On the flip side, having a big threat to send in over a 2/3 blocker isn't great as it will get recoiled and set you back pretty hard. The best answer to Ashiok is a spot removal card and even then you are eating a two for one, probably some tempo loss, and using a key removal spell. All this adds up to make me think this has a good chance in cube. It does everything you want from a walker and pretty well. The -7 seems unlikely to be used that much as the +1 will win the game most of the time before it is online. Even so, the -7 gives some nice and unusual options and should be able to win a game where your 2/3s cannot somehow. This reminds me of Teferi, Hero of Dominaria in that it is so well rounded, a -3 to deal with any problem in play and a +1 to gain value. This Ashiok is not quite as good as Tef but just being in the same sort of league is a big win. 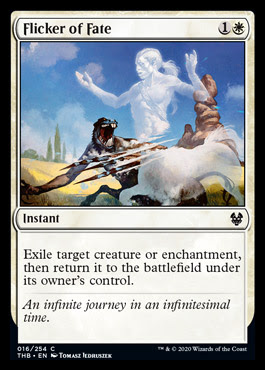 Not the best flicker effect but still pretty playable. More of an EDH thing than cube but I expect it will crop up in plenty. People do love a flicker! 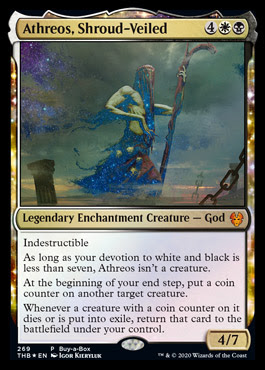 Cool card but really just an EDH thing. A six mana card that does nothing when you make it by itself is a no go. Looks very fun to build around though. Might even be enough things you can pair with it in standard to make it decent there too. For cube play it just seems like a trap outside of the lowest powered of cubes. 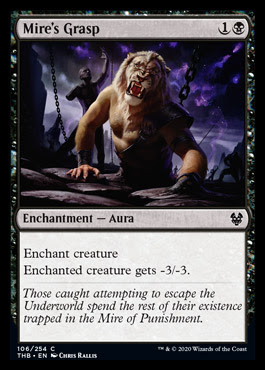 A fine enough card but mostly just a sorcery speed Last Gasp. With that not seeing play much I can't see this doing so. Soft two mana dork removal is not really all that in cube these days either. Enchantment support is the only real hope for this. 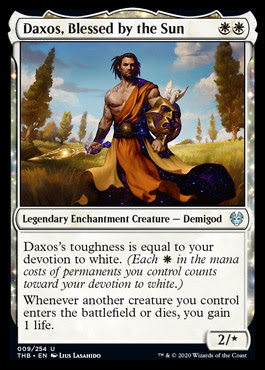 Daxos, Blessed by the Sun 6

I like this one. I like it a lot for a number of different synergy build around style decks but it might also be enough just on its own. This will be huge in soulsisters and other white creature life game plans. It will be decent in devotion decks if they become a thing in white. It is great for any enchantment based white aggro deck too. Lots of role filling capability and lots of raw power. Daxos will often be pretty huge in the back end and will be very hard to beatdown or race. Possibly a little polar for my tastes as a stand alone cube card being double white and so good against aggro and so poor against control. 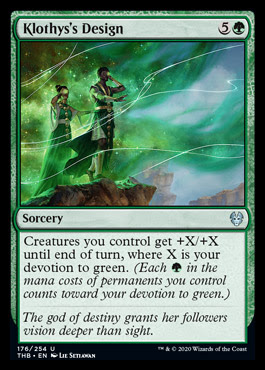 Seems like an awful Overrun. This is narrower, more expensive and doesn't provide evasion. The scaling potential is limited too as with enough devotion and overlap you were winning anyway. Pretty embarrassing when this is +2/+2 due to your dorks being tokens and your one splashed non-green thing... 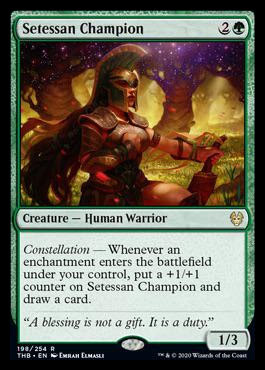 This is a lot of card but it is rather narrow if you wish to fully abuse it. Luckily this is probably potent enough that you can run it in places where you are only really interested in part of what this does for you. This is both an Enchantress that will turn your enchantment cards into value and it is a big old threat that will become one of the biggest things in play. All aggro enchantment decks will run this and a bunch of simply enchantment decks will consider it too for that oh so high power level. In a world where Verduran Enchantress still gets a look in this seems impressive! Sadly, unless you support it directly or this set is more powerful than Modern Horizons there is not going to be enough enchantments kicking around in your cube to make this a card you will want to run. Still, obscenely potent and something I expect to see in lots of formats. 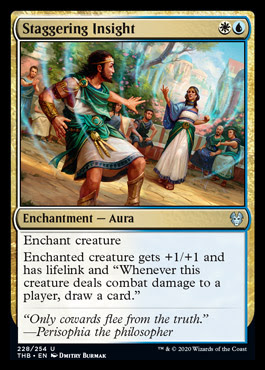 I rather like this little Curiosity. It is too narrow for mine and most other cubes but could be a nice little way to push a blue white skies/tempo archetype. Mostly if this is good in your cube then you should probably already have Curiosity and Curious Obsession in. This card screams Invisible Stalker to me. I certainly look forward to playing with it even if it is not in the drafting cube. 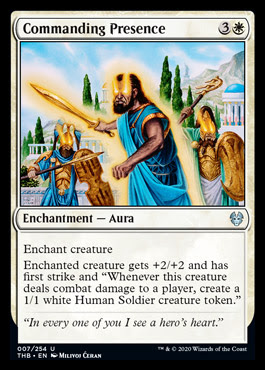 This imbues the power of Precinct Captain to your dork. The upside of this is potential scaling, likely pseudo haste, and generating a big scary threat. The downside is costing twice as much as Captain, needing a target, and opening yourself up to a brutal two for one. Suffice it to say the downsides heavily outweigh the upsides. 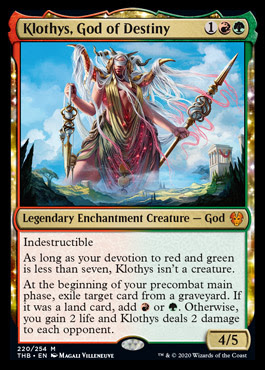 Part Deathrite Shaman, part Sulfuric Vortex, and part Leatherback Baloth. This is a powerful card but it can also be a little aimless. It can do nothing, it can just be a very overcost mana dork or very slow threat. Gold cards want to be powerful but they also want to be reliable and perhaps a little more direct than this. Certainly worthy of testing and absolutely a card that will shine in certain builds. I am not sure that it is going to be consistently good enough to be a drafting cube mainstay however. If it is good then it is probably very good at least. 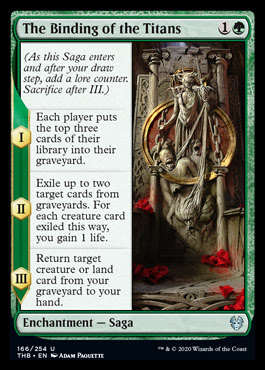 The Binding of the Titans 4

Grapple with the Past reworked a little. Slower to work but a little more returns. I think this is probably too slow and dangerous to be run in limited settings or over Grapple. Milling your opponent for three is mostly a help to them even if you get to exile two the following turn. I like this card a lot but I think you need to really want a second Grapple or have enchantment synergies as well as graveyard ones for this to be the thing. 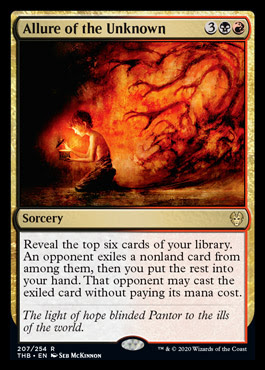 Allure of the Unknown 0

This is mostly beyond bad but it is one of those sorts of cards I expect to crop up somewhere for some reason. Basically giving your opponent a free card out of six cards and letting them cast it for free is about a big of a drawback as you can get. It cannot be played in decks which have bombs, or that need specific cards. Certainly draw 5 cards for 5 mana is potent but in cube you can play proper cards like Ad Nauseum or even Moonlight Bargain without giving your opponent a free go. 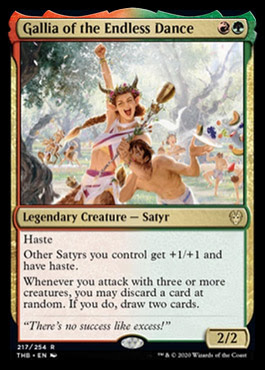 Gallia of the Endless Dance 6

While this is a  Satyr lord that is not really all that relevant in cube or really any format with so few good Satyr cards floating about, perhaps standard gets there. Perhaps one day that will be a reason to play this in cube but for now it is all about that attack trigger. A 2/2 haste for 2 is OK, getting to Desperate Ravings (back to front) is fantastic. It is card advantage, it is somewhat card selection, it fuels the bin. All very nice. Attacking with 3 is tough in Gruul and will likely mean Gallia is not surviving. That on top of being gold makes me think this won't last in drafting cubes. Still a great card with a lot of application. Great support in more exotic strategies and just a great card in those Gruul decks you expect to be going wide with. 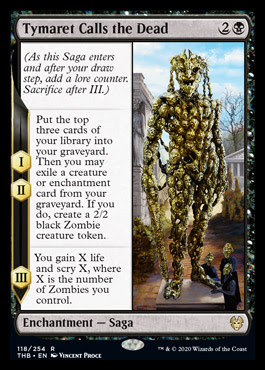 Here we have a take on History of Benalia. This is higher utility and ceiling but lower tempo and reliability. You need a reasonably high dork count to play this. If you play it early and miss with the first trigger it is suddenly a very low powered card. In a zombie deck or one with strong graveyard synergies then this has a lot of potential but as a filler card in midrange and control it might be rather less consistent than you need from such things. My fear is that this just won't have the reliability enough of the time, even when you have the dorks in the bin you might not want to be exiling them. Call the Dead is very powerful and has an incredible potential but it lacks the playability due to needing a deck with a high creature count. It might well just be good enough that you don't need it playable in more than a couple of places but it is certainly a card to test rather than a lock in. 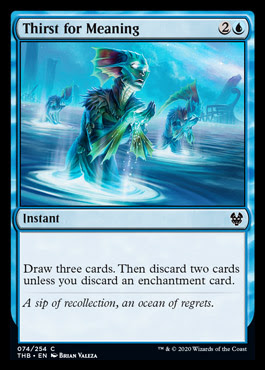 Great card that will see plenty of play, mostly in Replenish style combo decks. Raw card draw is a little hard to run in cube these days. While this might be pretty high tier for card draw it is a little bit narrow for drafting with. Lovely and welcome tool in the arsenal of magic cards but not the kind of thing I look for in a drafting cube card.