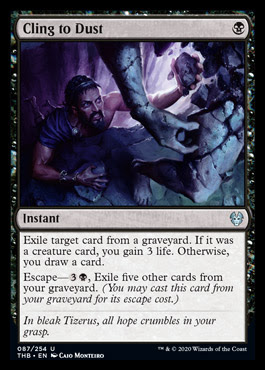 This is one of my favourite cards so far from the set. It is the black card I didn't know I needed in my life. It might look subtle but I think this is going to be a pretty big deal. It does a deceptively large number of things and seems like a Charm style of card rather than just an exotic Cremate. In terms of the first cast you are doing one of a couple of things, you are probably just cycling it for a black mana to draw a card. You might however be disrupting your opponent in some way by removing a specific card in their graveyard. Lastly you might just be in Healing Salve mode and caring more about three life than anything else. In especially juicy casts you will get two things you want simultaneously, usually some disruption and a card. Without the escape that is enough utility given the low overall cost of the card that it would see some action. Toss in the escape, despite the high cost of using it, and your card jumps in value massively. Cling to Dust is a bit of a Whispers of the Muse blended with Think Twice. You get to continually draw cards by dumping resources into it. You get to do it from the bin and you get to do so without having to hold onto the card as dead weight in hand. Just fire this off as soon as you need and then let it sit there until you have some spare time and mana. Four mana isn't actually the expensive bit, the exiling of five things in the bin is. You can't do that for long, you will rarely do it more than a couple of times, you simply don't have the capacity to fill up a yard that quickly or fully in 40 card decks. Even so, just uses from one to three times is more than enough to make this pretty exciting. It can be to Treasure Cruise as Think Twice is to Divination and given how much more playable both Think and Cruise are than Divination we can expect decent things from Cling to Dust. Perfect cheap dynamic card for black to keep their options up. 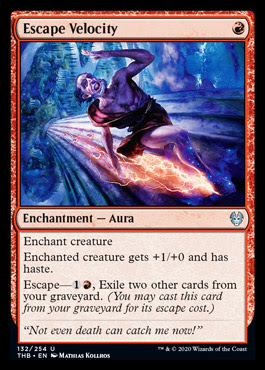 I like this but I fear there are just far better tools for this kind of thing. If we are talking graveyard synergy then we have the likes of Anger and Dragon's Breath to assist our plan. It is low enough cost that it could have a semi Rancor like use for red. The issue is that adding costs to give haste is not all that good in terms of a general curve. Give me a Goblin Motivator or Lightning Greaves over this as a provider of haste.  A bit low powered and overly needy both on archetype and the specific cards used (in that it doesn't scale well with other haste dorks). Much better than it might look but probably still not quite there. 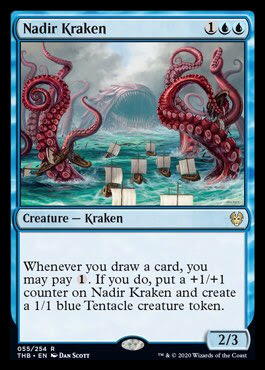 Krenko, Tin Street Kingpin meets Chasm Skulker! All cards with pretty low floors but some equally devastating upside. The Kraken enjoys the smallest range of the three with a higher floor but make no mistake, Hurloon Minotaur is still a shocking floor for cube play. While less range is a better design premise the high ceiling on these cards is what makes them so appealing. Turn two unanswered Krenko is a nice easy win! The big thing keeping the Kraken in check is the mana cost required to get the ongoing value. Being tied to paying mana when you draw cards is a huge deal. It is why Mentor of the Meek is so rubbish. Kraken does provide ongoing value but it never really becomes that impressive in terms of what you get for the mana. A 5 mana 4/5 with a pair of 1/1s? Still not quite a Mesmerizing Benthid. An eight mana 7/8 plus five 1/1s? Certainly a lot of stuff but still also dead to Ugin, the only card worthy of 8 mana in my cube. Also, when you take into account the amount of time you don't have all those stats for and you are looking at rather less card. This feels a bit slow and vulnerable for aggro and tempo decks and far too unreliable for control lists. I can see it being decent enough in midrange but there I would most like to pair it with cards like Jace Beleren that can give me draw triggers more rapidly so I can start to scale it up quickly. It all sounds rather wishful and bleh. If I am drawing cards I am not desperate to tie up my mana elsewhere. Certainly one worthy of some rigorous testing, decent power but still not in love with the card. 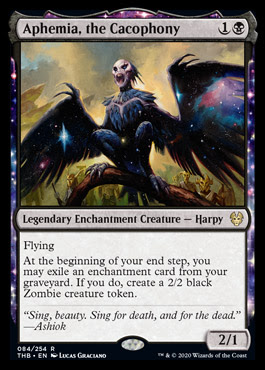 Cute little card that does have some hope in a cube setting even with relatively little support. The floor is pleasantly low and the upside is pretty strong. If it triggers once then you are very up on most metrics. Basically a two for one with really impressive tempo to boot. It will be quite hard to stop the first trigger too as it is an end step one. Any triggers beyond the first and the card is looking pretty abusive. So how easy is it to trigger in a constructed deck? Or in a drafted cube deck? How much support can you reasonably add to a cube to assist Aphemia and does it do enough to push it from the playable to the strong? The answer to the first question is very easily but whether that deck is actually good is another thing all together. When you are playing Dead Weight over Fatal Push and filling up with things like Unbridled Growth just to get zombie tokens your deck is taking a power hit or at least becoming narrow. Setessan Champion does seem to do a lot to push this plan in standard at least but cube is going to be a much bigger ask. My best guess as to my second question regarding frequency of trigger in a cube setting is about 5% which sounds a bit on the low side. You don't need to get it that high to be good, perhaps 20% or so but without other payoffs I can't see that being worth it but worth testing at least. 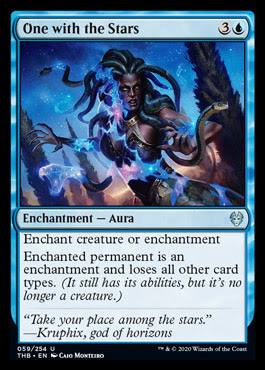 One with the Stars 0

This is a mystery booster playtest card?! Fast turn around if so. No idea why they would do that but it isn't relevant here so... Yeah, interesting card but far too expensive for cube play. Probably needed to be 2 mana for that and 3 for standard play. Too many dorks will still be useful even with their combat abilities removed. Four is not a price you want to pay for such a soft removal card. 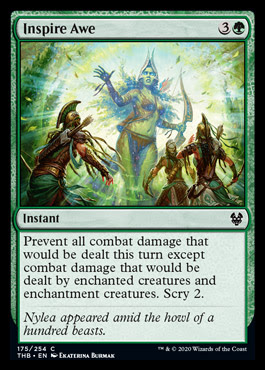 Fog at four mana? On your bike mate. Oh what, my Courser of Kruphix gets to do two? Fucking woop de doo. Even scry doesn't sweeten this rotten deal. 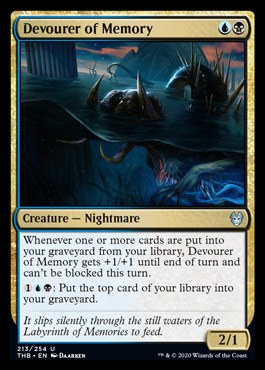 Low powered, gold, fiddly and aimless. A fine enough limited card and perhaps even filler in the right standard deck but certainly not making waves in cube for any reason in any place. 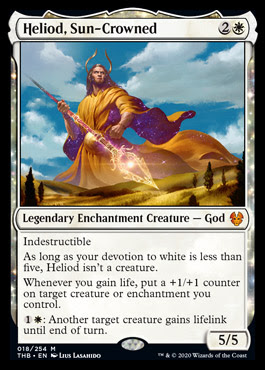 First he kills of Elspeth, now he is getting Walking Ballista banned in pioneer. What a dick of a god. Such things aside this is a very good card. He works well with a lot of the things white does. He is cheap as far as gods go and his devotion is easy enough to satisfy in white where enchantments are plentiful as are low cost dorks. Heliod is probably good enough to run in most white aggro decks without any specific synergy or other lifegain. Toss in some synergy and he quickly accelerates in strength. Despite the high power there is still a chance he isn't played enough due to potentially not doing anything. White aggro decks are already pretty tight on spaces for cards that need support with vehicles, anthems, and equipment. Heliod might just be a luxury card. 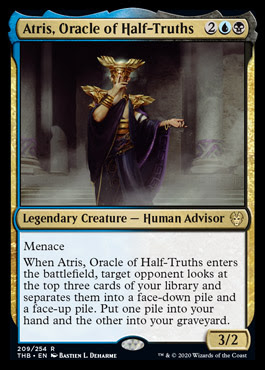 Atris, Oracle of Half Truths 6

I love the mini-game this card presents. It is worse than the -2 on Jace, Architect of Thought which in turn is better than draw two cards but worse than draw three. Atris does fill the bin a bit at least but you are probably not playing a value four drop in that role often. So, is the EtB on Atris better or worse than draw two? My guess is that it is slightly better on average although it will sometimes be worse. So, is a 4 mana 3/2 menace with draw 2 on it good? Yes. It is Bloodbraid levels of good trading a bit of tempo for extra value potential. I prefer the Bloodbraid for being more on theme with the colours and harder to deal with but just being in the same sort of league is a great place to be. Despite the clear power of the card I am a little reticent on calling it any sort of auto include. It is still fairly low tempo and horribly gold. You can just play Mulldrifters and that sort of thing if you want cards back from dorks. You don't need to turn to exotic gold cards. I like my gold cards going above and beyond, doing things you can't get in your colours or doing them so well you can't turn them down. Hostage Taker is a great example of this while Atris is not. Similar power levels but one is unique and desirable while the other is much more a filler support card. 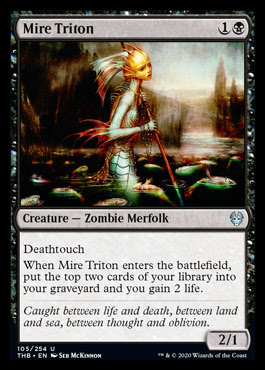 This is a solid all round support card that is good enough to be played in any old deck regardless of how much you want self mill. Two life is great in black and deathtouch scales so well into the late game that there is little wrong with this. Amazing when you want to mill, fine when you just want a cheap dork. Certainly more in the midrange camp than the aggro one but generic enough to play most places. A card that does a lot without being all that powerful. 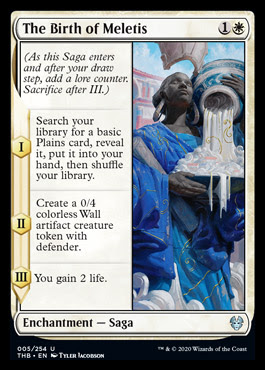 The Birth of Meletis 6.5

In many ways a Wall of Omens but sadly in some key ones not so much. This only gets basic plains greatly reducing what it does for you and where you are happy playing it. Most importantly however it fails to be a blocker the turn you make it which means it is going to be a shocking late game top deck too often. The two life probably makes up for this in the early game but later on it will not. There are obviously some perks to this such as giving you a shuffle, being an enchantment, making an artifact, being multiple permanents in one cheap card, etc. These will all allow for better support in certain themed decks and afford some cute things that it does. It will not however make it compete with Wall of Omens in the average cube draft setting. This might not even be playable in the drafting cube but I think it will be.