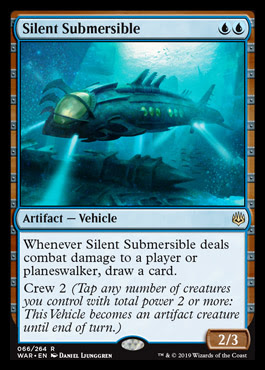 This is a bit sad when put up next to a Smuggler's Copter. Not that Copter should be the bar for vehicle design as it was a little too pushed. This lacks evasion pretty savagely. The crew cost is also pretty hefty. You can only really play this is in a blue heavy, creature heavy deck. It has some perks like being Wrath proof. Adding devotion effectively. Being able to attack faster and more freely than most other card draw dorks on the assumption you can crew it. It is potent in the right setting but it is super narrow. Far too narrow for the limited cube. If this isn't drawing at least one card on average it is very poor and getting to that kind of average takes more work than you can consistently perform in drafting cubes. 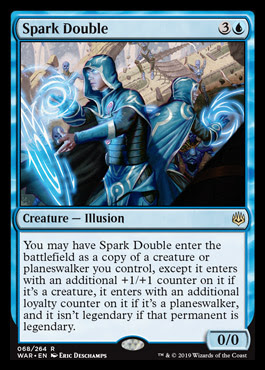 Powerful but only able to copy your own stuff makes this a silly win more card. I know people love a Clone but that doesn't make them good. Certainly when they are good they are great but again, having a high ceiling is not the same as being good. Clones are at least playable, ones that target your own things exclusively are not. I can imagine a combo using this one day existing, or indeed already existing but for general purpose use this is a lot worse than a Clone or indeed a Celver Impersonator. Both of which I hate anyway. 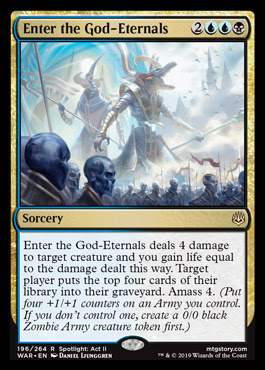 Mild mill, gain 4 life, Flameslash and get either a 4/4 token or +4/+4 to a specific token. This is a bit all over the place. It is powerful for sure but much of that power is tied up in the stats and they are not all that reliable or effective. The mill is only useful in some settings. The more I look at this card the more I prefer Prophetic Bolt. This is more value than Bolt but at least Bolt is good at what it does. I should probably try this but it seems far too gold, fair, high up the curve, and hard to fully extract the value from to be a winner. I only really like it where the mill comes into play so either delve (for which it is really too expensive), mill (for which the actual mill is pretty tame given you can be milling for 10 and having a Jace in play for that price), or delirium (for which it is a bit heavy blue) builds. Lots of power but not enough to tempt me properly. Instant as well might have done. I will give this a quick test just to be sure as it is a lot of power. I anticipate quickly cutting however. 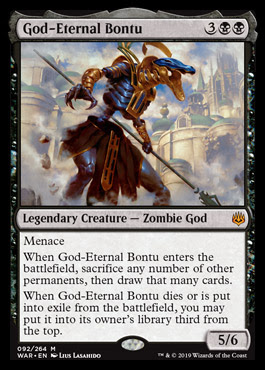 Less impressive than the red offering but still with some merits. Bontu has less power and weaker evasion than Ilharg but his effect does trigger immediately. His less impressive body feels like it greatly detracts from his threat level which in turn makes the scaling with his god recursion a lot less impressive. He just isn't that scary of a thing to have in play, if you have already used the EtB effect once I am not that bothered about the second go of it either. Really Bontu is a Reprocess on legs. You get a 5/6 menace for just an extra mana which sounds like a great deal. Further to that being an effect on a creature makes it way more useful in the general sense with flicker, recursion, greater depth of tutors and all that sort of thing going on. Reprocess is probably a card a lot of people are learning about for the first time now or recently! Is it good? At four mana, not really, it is a bit narrow and a a bit situational. All it really has going for it are synergy and scaling potential. By being on a reasonable body the situational nature and floor of the scaling aspect are all remedied. By being married up with a body worth at least 3 mana in a cube setting your effective cost of Reprocess effect drops from four to at most two mana. With all this in mind the overall result is decent. If you have a deck which generates permanents, especially any detrimental ones or low value ones ranging from small tokens to Sarcomancy to Abundant Growth and Oath of Nissa type clutter then a Reprocess effect on the back of something is great. It will get you a couple of bonus cards at very little cost. It will help with floods, help make things like late game Llanowar Elf draws less painful and all sorts of good stuff. Two cards drawn at negligible cost make Bontu very good. More is easily possible and you can even use it with certain cards to improve your position such as Judith. Bontu seems like he solves a lot of problems in deck building and has a decent power level for his cost. He reminds me of Sidisi, Undead Vizier. You get a better body than Sidisi, more chance to scale up and a broader range of things you can sac to help with synergies for the mana. Demonic Tutor is nice but even just draw two can be better. Draw three is likely better on average too. I certainly think Bontu is useful and powerful enough to crop up in a load of places. I am not as sure if he is playable enough to be a drafting cube mainstay but he looks pretty close. I like the fact you can be greedy with your draws and sac your lands to below five mana and just hope to get back up in time to recast. You could potentially Time Walk your opponent through excessive greed which feels flavourful! 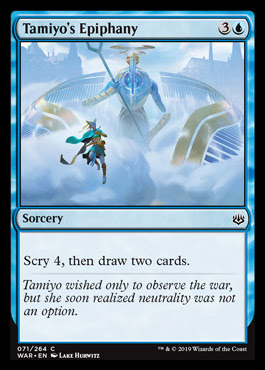 This is Foresee again. Not entirely sure why it needed another card, the original is pretty clean and would even have worked fine with the art and flavour. Anywho, Foresee is great but it is fraught with even better alternatives and is really just too much of a four man sorcery speed card with no tempo gains. 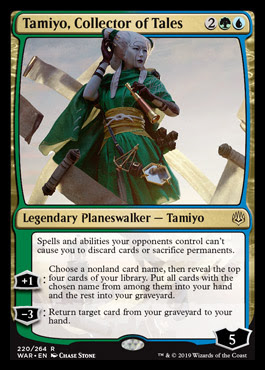 The static effect is fairly narrow and mostly seems to hose black cards. There are some others elsewhere like Wing Shards and Wheel of Fortune but the majority are black. This certainly makes Burning Inquiry look like a bad play! All told I don't highly rate the static effect, it is sufficiently narrow to be annoyingly polar. Mostly it will be blank, occasionally and randomly it will win the odd game, not ideal design for a drafting card. The -3 is a Regrowth which is fine but not overly exciting. There are a bunch of singleton decks that rely on specific cards which does up the value of this rather but only in the constructed side of things really. Also not in a big way, there are lots of options on graveyard recursion. The value of this is that it is on a walker which is only going to be relevant in some settings unless the rest of the card is great. As we have established a third of the rest of the card is pretty minor which leaves us with the +1. Better than it looks but not great. I earlier criticized Domri Rade for only being a draw of half to a third of a card. Tamiyo goes a bit thinner with a starting baseline of about a seventh of a card! You can assure the draw with library manipulation and reveal effects and your odds greatly improve as the game goes on and you use the +1 more. All told I don't think you are getting the average of this over half a card. It also shows your opponent what is in your deck and what is not in their hand. That is probably worse than the perks of ordering the bottom of your deck. It does have the perk of digging for specific answers better than a draw. When you only have one out in your deck the +1 on this might as well be a free Impulse. A hidden buff as it were but only a fairly minor one. Over all this Tamiyo affords no board presence or means of protecting herself. At best she is just a thing that draws a card each turn. At worst she is gain six life and she will sit nearer that low end performance most of the time. I imagine this will only see play in decks after the -3 and even then not very often. Perhaps the odd sideboard too. 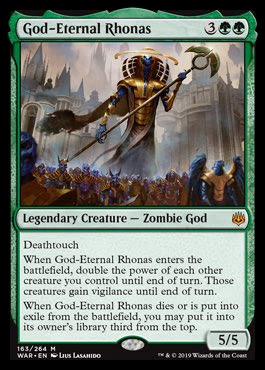 An unimpressive body is a really bad start for Rhonas. No evasion and low stats for a green card. The EtB effect is also just a little off. Overrun is powerful and good but the way in which you use it is not really improved upon by having a body without haste attached. It is certainly severely weakened by trading trample for vigilance. Rhonas is unreliable and unsuited for an alpha strike win and seems a little aimless after that. Either you have good attacks or bad attacks. Doubling of power rarely equates to doubling the effectiveness of your attack. You may do a bit of face damage extra or force an awkward block that wouldn't have otherwise been a trade. You might get to kill off a walker they didn't expect. Experience tells me that the average effect of this will be low. In a lot of games it will do nothing. In some it will do a bit but not change the outcome of the game. In too few will it do meaningful work. I don't see where this fits into cube. 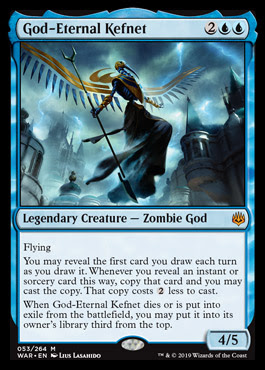 A nice body, especially for a blue dork. This will hold a lot of control over what is going on in the game. It is pleasantly cheap which helps with the value of the recursion. It is also reasonably strong on both offense and defense. The ability is weird. If your deck is full of Opt and Brainstorm, or even more oddly, Thirst for Knowledge and Desperate Research then it will net a good amount of value. If however it is more of a mix of dorks, walkers, countermagic and other such commonplace blue cards then it isn't going to do all that much. It works nicely with burn but are we really playing such a slow value tool in a burn heavy deck? Kefnet has a number of angles, none of which are bad things and result in an overall package that contains a lot of power. What Kefnet fails to do is have any obvious places you could put it in and have it be good at using all the various attributes of the card. Test worthy but not holding out too much hope for this one although I do quite like him.