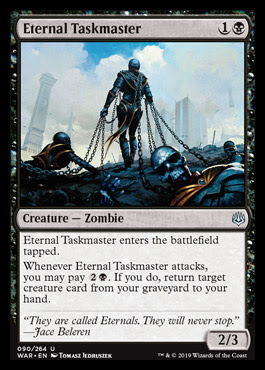 The effect on this isn't nuts. Raise Dead is a one mana effect and this needs to attack in addition to paying three times the going rate. Despite this looking like a poor Gravedigger in some respects it is a much better all round card. It is better in the early game where you can deploy it without targets and will less upfront mana and have a generally better body. Black doesn't have that many good cheap high stat dorks and that gives this some appeal, even if it is a cruddy blocker when you make it. In the late game this may cost a lot to recur dorks but it can technically threaten to do so every turn and so is actually a reasonably acceptable value engine and thus threat. Zombie tag is always nice, as is not costing BB like most other robust cheap black dorks. I think this generally outclasses Relentless Dead and actually has a reasonable chance of performing in the drafting cube. Failing that is should do OK work in tribal lists. 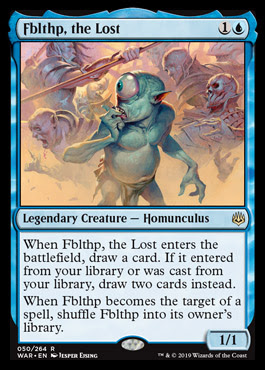 Finally blue gets an Elvish Visionary and thankfully it is better not worse. I am not sure quite how many good ways there are to get this into play from your deck rather than your hand, Birthing Pod, Vannifar, Collected Company, Vivien's Arkbow are the ones that spring to mind. None of those are currently in my drafting cube but I could easily up the support for them and include. They are certainly cards that feature a lot in singleton constructed events. With those kinds of effects on offer Fblthp is pretty nuts. Drawing two is lovely and the reshuffle lets that happen again and again! Without these sorts of cards Fblthp seems to be basically just an Elvish Visionary. Slightly worse for delve and delirium decks but slightly better in other ways. You can generate a shuffle with him! As long as you are flush with mana drawing this kind of card is never a bad thing. Free chumps! Blue wants chumps and ways to draw through its deck and so this card is pretty perfect. It will see plenty of play without any exploits. It will start to get fun with them! 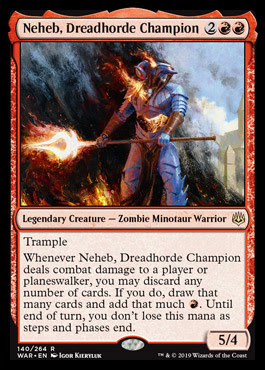 Certainly a punchy dude. The statline is decent for the cost and trample helps the whole package out a lot. The damage trigger is pretty nuts too. It provides potentially massive mana and a lot of card selection. You can't go too ham on it in 40 card decks but given you are also doing 5 damage a hit and getting loads of cards and mana you should be winning before decking is a thing! Where Neheb falls a bit flat is failing the removal test pretty hard. It is relatively easy to kill this four drop and in doing so you will generate a big tempo swing. Neheb is just a big expensive dork that brings no extra value until he is involved in combat. Lovely that he has the freedom to hit players and planeswalkers but far from enough to save him from having to in order to be worth it. Where Neheb will come into his own is in decks with things like Rhythm of the Wild. With the simple addition of haste Neheb becomes one of the better dorks on offer. I can see myself running this in decks where I can easily haste it up reliably more often than I can see myself not playing Neheb in those decks. Outside of decks giving this haste or abusing tribal tags (of which this has more interesting ones than most) I think this is a trap and playing it will reduce your win percentage rather than increasing it. 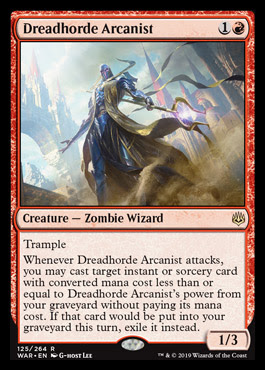 This seems like one of the best cards thus far. Perfect for my cube at least with so many one mana instant and sorcery spells you want to cast each turn. In an aggressive red deck this can freely flashback burn spells and continually clear a path for itself in combat. In an izzet tempo deck it will ooze value as it recasts Preordains and the like. Buffs are scary with this dude too. Especially when you can chain them. A Become Immense on this lets you recast it for that brutal hit. Not convinced this needed trample as well... This reminds me of Kari Zev except rather than a monkey is it a one mana spell ruining your day! Way more scaling potential, way more utility and way more value, and that is way more than one of the best red two drop aggro dorks. This is like a far better Shadowmage Infiltrator card. It not only effectively draws you a card but plays it as well. It only has to attack rather than get through and it only costs two mana. The only things keeping this at all fair are the need of sufficient support. One mana burn certainly just became more premium! The worst thing about this card is that it is so good and efficient it will eat up a lot of the things in the bin and thus reduce the value of things like Pteramander, Grim Lavamancer, and Treasure Cruise. Those cards and the Arcanist are all so good that you don't much care about that. Play them all and be happy with your busted cards. This can get very out of hand when you are able to increase its power and start to play meaty spells from the bin. This actually seems good enough that some red buff cards could make a return. Both ongoing and one shot cards all seem great with this. Titan's Strength into recasting a Cryptic Command! Judith just to get back those Krenko's Commands and Collective Brutalities! A card you do need to support but not in an onerous way, the support you want are cards you just want in most decks. Mostly that is just good cheap spells. This is a super high threat level card that is cheap and easy to get down and relatively hard to handle. It can dominate a game all by its self and get very out of hand or just pay for itself in on attack and trade off. Very high ceiling and acceptable floor. Lots of threat, lots of options and lots of utility. A huge win with only the mild fear that it is potentially too good. While no Deathrite Shaman (the last card that seed like it was too good) this card certainly is scary. We hear the terms "red snapcaster" and "red dark confidant" bandied around a lot in spoiler terms. Functionally this isn't the closest to those cards but power wise it probably is. 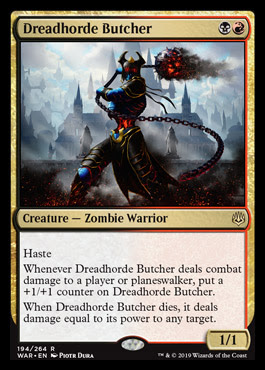 This is quite the upgrade to Slith Firewalker but then it would have to be as the Sliths have not aged well. Firewalker was a big name back in its day but that was the days when Psychatog and Wild Mongrel were the hottest things in town. Butcher has more useful subtypes than Slith, it can trigger from hitting planeswalkers which is nice and convenient but really it is all about that damage on death trigger. That adds a lot of value and a lot of threat to this card. Every hit this gets in makes it doubly scary. After a point you are going to really need to find a way of dealing with Butcher that doesn't trigger the on death effect. It is also quite easy to milk the trigger even if the Butcher hasn't grown itself. There are a bunch of power buffs and combat tricks that make this even more dangerous. You go to Doom Blade the Butcher and suddenly a Mutagenic Growth is giving them a Lightning Bolt. Black and red are good colours to clear a path for attackers you want to connect with. I like this card a lot, it is certainly nice and powerful. My concern is that Rakdos colours have a lot of very good options for the cube and gold two drop dorks always underperform in cube. This might well be more powerful than Angrarth's Rampage but it absolutely isn't going to be more playable and that is really what it comes down to for limited cubes. 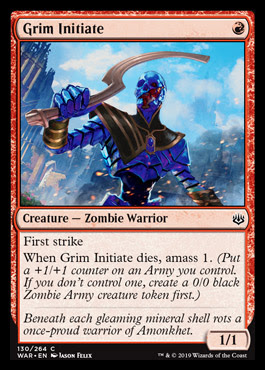 Red finally gets it's very own Doomed Traveler card. Grim Initiate is front loaded with the keyword on the creature and not the token as per the white cards like this. That does make this better but then it is first strike which is good but certainly no flying. First strike is an ability that scales up with power so on a 1/1 it is fairly low impact. That being said, there are a bunch of power buffs in cube and a lot of other good first strike dorks you can at the very least double block with for a pseudo power buff. Either way, the comparison is fairly irrelevant as you play this for the low cost two in one card. You play it to empower things like Goblin Bombardment and Blood Artist and not because of its stand alone power. In that regard this is a very useful card that will see a lot of play in appropriate archetypes. It isn't an exciting card nor is it a powerful bomb. It is just a cheap supporting role filler card. It is a foundational card and it will greatly improve decks but you will rarely notice it doing that good work. Grim Initiate is the kind of card that makes other cards look good. Tribal only card really as far as cube is concerned even though there are a fair number of zombie token producers kicking about. This is just too much of a low impact card. Baseline it is a 2/5 with some very minor perks on 1/1 of that card. Sure, it is a two in one card but not an exciting one. It doesn't have the same utility or impact as a Pia Nalaar. With zombie buffs and a reliable quantity of zombie tokens to be further buffed by this then we have a powerful enough card. Even then, zombies are so incredibly flush with three drops of high tribal synergy that this might not bring enough to the table for a 40 card deck to make the cut. Perhaps this needs tribal EDH to get a look in these days. 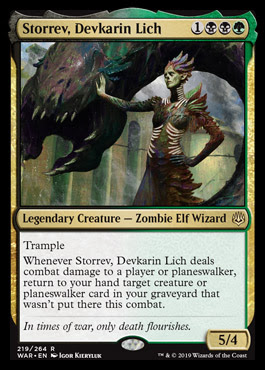 This is remarkably comparable to Neheb. Both 4 mana 5/4 tramplers that get loads of value when they do combat damage but little else prior to that. Despite the clear power here this has poor chances. Golgari is less of a haste giving colour than red for one but mostly Golgari already has Meren of Clan Nel Toth who is vastly superior to Storrev at doing what you want Storrev to do. Or say Recurring Nightmare. Storrev is a bit cross purpose, he has the body of a zoo beater while being a value card. Plenty of power but everything else is going wrong for this card for cube.