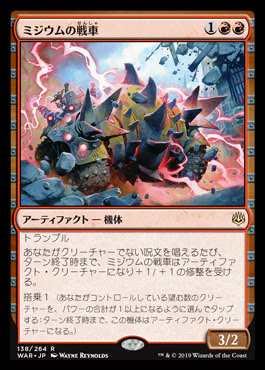 This is an interesting one for sure. It is significantly the least demanding of the vehicle options needing only a single crew or any non-creature spell to turn it on. Unless you are playing this in a kobold deck it is going to be active when you need it to be. This is more of a Chimeric Idol than it is a vehicle. Just a threat that is immune to sorcery speed creature kill when you want it to be. That is rather nice. While it might not prevent that much spot removal with most creature kill being instant and most sorcery speed spot removal able to take out artifacts anyway. What it does do is bypass mass removal and that is really what you are after when it comes to protecting creatures. So how good is a 3/2 trample prowess dork with "protection from sorceries"? Quite good I would say but probably not good enough compared to the power of red three drops. Potentially another good threat in the Kiln Fiend style one shot decks but likely a bit narrow to be good enough without heavy support. Certainly one to test. It is clearly very close to being nuts. As a 3/3 starting point this would be a significant amount scarier for example. Really this things chances hinge on weather red wants more power in the three slot or more diversity. Presently it feels like power is the go to with cards like Chainwhirler and Legion Warboss getting most of the action. I think white would snap this up with white being that much more susceptible to mass removal without the reach of red and its direct damage. 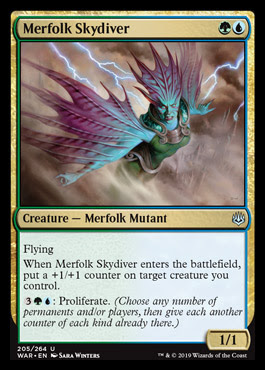 Reasonable baseline of Gaea's Skyfolk with a dash of Ironshell Beetle and Viral Drake thrown in. Five to proliferate is a lot and shouldn't come up loads but it still pushes this cheap card fairly hard. As a mono spell this would be too much to pass up on but in Simic it is going to struggle finding enough homes to see play. A powerful card that is hard to use (in a design sense rather than a gameplay one). 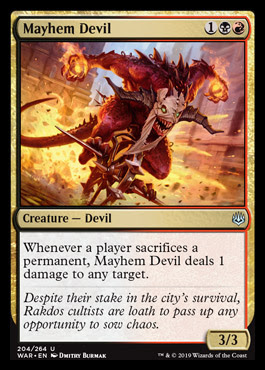 This seems dangerously good for the Judith style of deck. While it requires a sacrifice rather than just a death of a creature to trigger it works with either player's stuff and can target anything with the ping. For the most part you are able to sac off your dorks in these kinds of deck as you have Carrion Feeder or Goblin Bombardment cards in play. You can also use sacrifice based removal to empower it further if you are being really keen. This is even powered up by sac lands as if they needed any more perks! I suspect this will be a bit annoying without support, when housed in the right sort of deck it could be downright lethal. The Trained Armadon baseline is a good thing too, you don't normally expect these kinds of utility creatures to be beefy. The only mild concern I have for this is a bit like the concern I have for Dreadhorde Butcher. There are just so many premium Rakdos cards at present, keeping it at all reasonable and inline with other guilds is going to be tough and some great cards are going to get left out. This seems a bit too strong and well supported to get passed over but it is still all a bit uncomfortable. Rakdos just seems to be getting all the love at present. In fairly recent history Rakdos was one of the weak colours, bottom three for a long long time. It is one of the very best right now and has the most cards vying for a drafting cube slot. 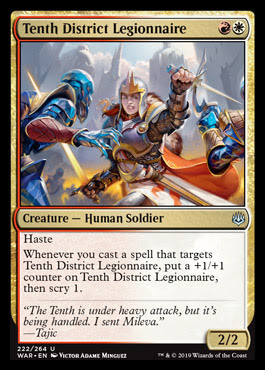 I am actually quite keen on this card. It is basically a Battlewise Hoplite but red instead of blue and hasting for complete free. The haste is a fairly big jump in power but so is the colour shift. I tried a bunch to make heroic decks work in blue and never managed. Red (and of course white) is the business however for a heroic themed deck. As it currently stands this has neither the support nor the stand alone power to do anything in the drafting cube. The power situation is only getting worse with time but I can at least imagine a meta where there are enough spells that target dorks that this has a small hope. Even so, a good addition for the heroic deck if nothing else. 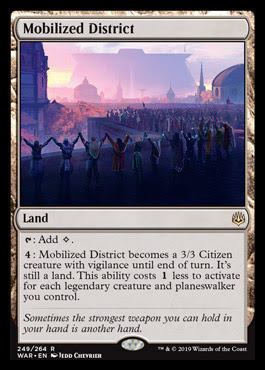 This is a cute little land that has a reasonable chance of seeing play in a number of formats, cube included. It is not es cost effective as a Mishra's Factory or Mutavault however it does have some perks over those cards. Notably just being a 3/3 carries more weight, it makes the card able to safely do more in combat and evade certain removal effects. Vigilance is no bad thing either. It potentially reduces the total activation cost and it lets you attack and block. Assuming you can use the 1 mana from the District itself you only need to reduce the cost by 1 with a legend to have it be as efficient in terms of mana to power on offense as a Factory. This is reasonably common in cube and two legends isn't that uncommon. This is right on the line for me. I cut things like Factory not because they were too weak for the cube but because I wanted that space for more fixing tools. I am confident District is also good enough for most cubes. What I am less sure of is how much I like it when compared to a land that fixes. 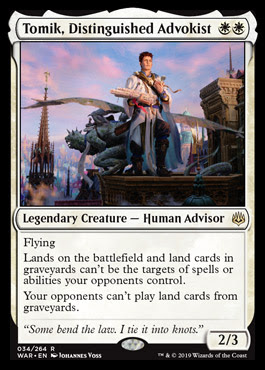 Well isn't this a whole lot of card. A WW 2/3 flier is a pretty exceptional place to start and outclasses any 2 drop flier before it as baseline. We don't really need that much disruption on top of that for this to be great and not just good. This is lucky really as the abilities Tomik has beyond flying are supremely narrow. Crucible effects are hosed by the latter ability which isn't a big part of many metas at all and not even that much of an issue for aggressive white decks! Land destruction also not a problem for white aggro decks but here is Tomik's first ability helping you out against Strip Mine and Stone Rain... I think the most application this has in cube given where it will see play is in combination with manlands. Animating lands seems a lot more brutal when they have hexproof. Mobilized District and Tomik turn out to be really good buddies. The card Tomik probably hoses most in my cube is Deathrite Shaman as it prevents him getting mana from your lands but white weenie rarely puts lands in the bin. I suspect Tomik is a bit double white to see much play outside of aggressive white decks. I think his abilities will do little to nothing most of the time too. He is still great as just a 2/3 flier for two but he is also very narrow and hard to milk for extra synergy at that. Boring vanilla two drop beaters ideally want to be more widely playable than this is set to be. Cards of this power level need to be more interesting. While this is fine for cube play and has sufficient power and application I imagine I will cut it in favour of cards that see more play or add more to the game. 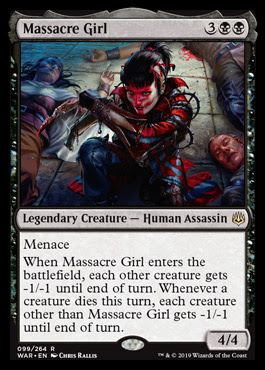 
Well this seems utterly nuts in my cube meta. This is pretty much a Wrath against the decks you want Wraths for. It is five mana but it comes on a solid and easily reused body. This is well worth the high cost. The way it works you will kill a 4/4 with her if there are three 1/1's in play as well, you don't need a perfect chain of 1 then 2 then 3 then 4 toughness things for her to wipe a board. As such I expect this to be a full clear against aggro decks almost always and fairly likely to be a full clear against midrange decks. You will certainly be able to set it up to be more easily than a lot of other setup cards. A five mana Wrath on 4/4 menace legs sounds ideal. It sounds like a massive swing in the game. It is much much more playable in game and in construction than Massacre Wurm and is much more effective against larger dorks. I see this being a huge boost to black control and midrange decks. Black has good mass removal but it doesn't have lots of it. This keeps up the theme of being good and reduces a weakness of the colour by being another Wrath. This is all very meta based however. My cube has no combo decks in it nor any power and as such is a very creature centric format. Most decks play them and most decks will have tokens and utility dorks and the like. There are plenty of cubes where Massacre Girl would be far too situational be be all that exciting. 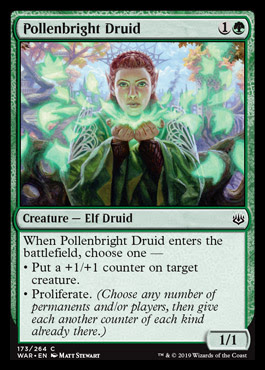 Well this is fantastic! Ironshell Beetle with a whole lot more upside. This is ideally a proliferate card, the +1/+1 counter mode is mostly there to ensure the floor on the card is decent. As a proliferator this is as cheap as you can do so while having anything else to show for it. I suspect this will see a lot of play due to extensive synergies it has and extreme scaling. It feels a bit like an Elvish Visionary. Pollenbright certainly has a much wider range than Visionary but it is also narrower in where it will be powerful. We shall have to see if it does enough for you enough of the time but given all the things this card has going on I struggle to see a world in which this isn't seeing a bunch of cube play. I can imagine it being cheap enough to potentially facilitate some interesting new archetypes in modern or perhaps even standard or legacy. 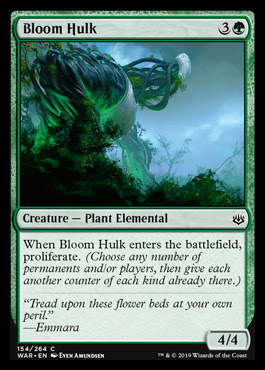 This looks very potent but probably not for cube. Four is a lot to pay for something and this is a support card. I would need to be proliferating in a way that was making a lot of mana with things like Pentad Prism before a card like this looks reasonable. I am not even sure this makes it into a Hardened Scales deck simply for being too far up the curve and too much of a standalone dud. Value wise this card is decent and it should be a fantastic common in booster draft.
Posted by Nick Nobody at 06:24