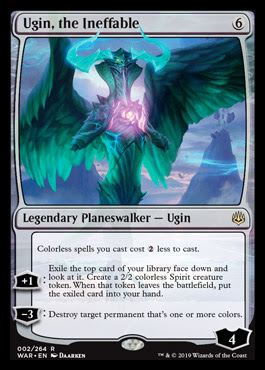 Very powerful but a bit fragile and a bit disjointed. Low loyalty is an issue for this card. You don't want to pay six and end up going one for one because your single loyalty is so easily lost. The +1 ability is great but it is slow and very low impact for a six mana effect. It is much easier to ramp into colourless cards and so when Ugin is coming out on turn four the +1 will be obscene. This Ugin feels similar to Karn Liberated in the kinds of place it will see play. It is a good answer for a lot of things as well as quite a weighty card. It gives you control and threat. While I don't think the power level is all that impressive I think the playability of the card is what carries it. Every colour wants access to this kind of removal and value in some way or another. The issue with Ugin is the static ability which is potent but hard to make use of. It is acceleration of a kind but no deck wants six drops to ramp them, six drops are what you ramp into. In which case the uses for this are combo or burst. You can do storm style things or Ironworks combo type things as you see fit. At this point your Ugin is just looking like a very overcost Semblance Anvil. It isn't just cube where it is hard to take advantage of all Ugin has to offer, it is all the formats. EDH has the best potential but Ugin was going to be an all star in that format anyway. I see this being a tamer, fairer but more playable Karn Liberated and as such it should be able to hold onto a cube slot. It certainly isn't the powerhouse original Ugin is but it is a whole lot cheaper and thus easier to fit in. The two broadly useful abilities it has are enough to carry it and leave the cost reduction as a bit of a sweetener. 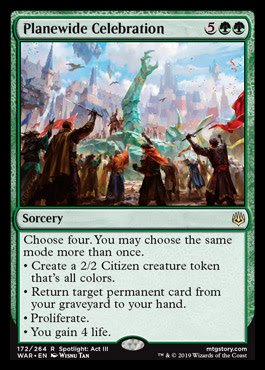 This is a supremely versatile card that has a reasonable power level considering the utility. The issue is that at seven mana you want to win, you don't want to mess about with utility. This does a great job of stopping someone else winning or gaining board presence or value but it is hard pushed to win a game like a proper seven mana finisher such as an Avenger of Zendikar. It does have one of my favourite words you can have on a magic card (proliferate) so I suspect I will play this, I just suspect it will be poor. 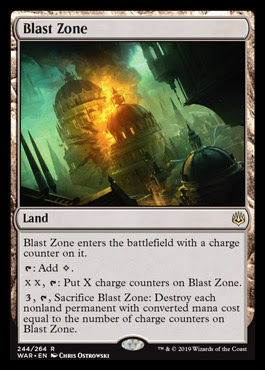 Well this is certainly an impressive utility land. A huge effect for not that extreme of a cost. This will do for four mana (and your land drop) what Engineered Explosives does for three. It doesn't scale quite so well upwards but then it can continue to scale past five, and it does tap for mana, so swings and roundabouts. To deal with a 3 drop you need to invest a total of nine mana over two turns which is substantially more onerous. Due to coming in with a counter Blast Zone is very poor at dealing with tokens. It can get two for ones and better but beyond one drops you are giving at least a turns warning which does rather limit the potential as opponents can play round it somewhat. One of the best things this will do is just sit in play for control players and act as a great deterrent to making multiple things of the same CMC. Given that this is both decent rounded removal and a land it should see a whole lot of play. The cost of playing it is greater than a Field of Ruin but no more than any Wolf Run or Westvale Abbey. It is reactive rather than proactive but I think that makes it better. I'm not suggesting it is better than Wolf Run, just better than a proactive utility land of the same power level as it. While not as game ending as Wolf Run it is at least a lot more playable and provides yet more colourless answers to colours lacking them. 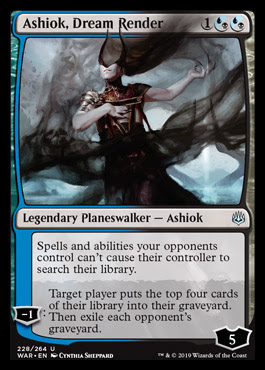 Best case this is 20 mill for 3 mana which is an outstanding return. It even packs some mild disruption in that time. Worst case this is mill for 4 and gain 4, the limp parts of Enter the God-Eternals! Overall this card seems like a very powerful mill tool but I don't rate it for the drafting cube. It would be exceptional against slow control decks and near worthless against aggressive decks and most midrange affairs. It just isn't doing enough on its own. You have to be actually winning with mill to play this Ashiok. It could be fairly unpleasant against a combo deck with key cards in singleton but there are better sideboard tools for that kind of disruption. So this basically just looks like a powerful new tool for the mill decks but that isn't overly welcome. Mill is not fun and rather over powered in 40 card decks. 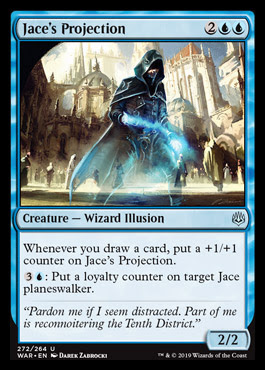 Not a terrible card but certainly not a good one. This has some mild hope of seeing action for the redundancy on Lorescale Coatl. With multiple dorks scaling with the same support it becomes more worthwhile building around such things. There is also a bit of possibility to play this in a Training Grounds build and actually get some real value out of the activated ability. If you can just surprise ultimate a Jace you probably just won. The masses of proliferate we gained in this set is going to help these insta-ultimate strategies out rather a lot as well. Really this needs to be given evasion and protection to be at all useful as a build around but I have seen weaker things working out in cube and singleton! Rare at least to see planeswalker deck cards having cube worth. Something I hope not to see often for financial reasons. 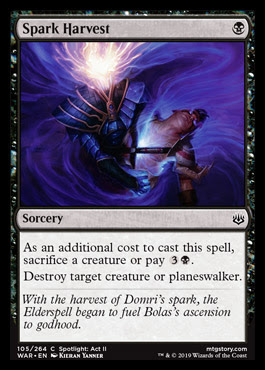 I rather like this but I have my doubts. One of the advantages of cheap removal is that you can use it early, except you can't with this. If you don't have a 0 mana dork this is never a turn one play. It is rarely a good play the following turn either. There just are not that many cheap dorks you need dead so much that a two for one on yourself is a good idea. This is much more like Murderous Cut than other removal in that by the time it is usefully cheap it is fairly late in the day. Spark Harvest will be able to provide big swings in the mid to late game but only when you have good things to sac off and other useful ways to spend the rest of your mana. Not many decks have many creatures they are happy to sac off and even those that do always need to do some setup before the saccing of dorks is good. Either this is cheap removal that that will two for one you or it is expensive removal that wishes it was just a Hero's Downfall. Sorcery speed certainly makes this a lot harder to use well. Just on the raw numbers you have to be playing this 50% of the time in each mode and incurring no other card or mana costs with your sacrifice for this to be better than Never (// Return). That simply isn't happening in the drafting cube and so this is looking like it is doomed from the outset. You cannot really account for the value of the casting options in a neat numerical way. It is just good to have two ways you can play something and that certainly makes this an option dense card. It is leagues and leagues better than Bone Splinters just for having the option to pay 3BB if you don't have a dork to sac. Cards that can be unplayable are at a huge disadvantage and Spark Harvest neatly sidesteps this. This will be very good in the decks it is well suited for. The kinds of decks where Cabal Therapy is good and probably the kinds of deck where Blood Artists are good. Outside of those builds I think it is going to under perform. Just a tiny bit too narrow and awkward to break into the drafting cube. 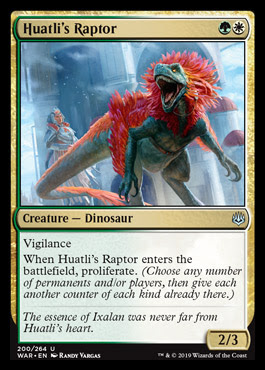 Very potent card that is not only one of the cheapest ways you can proliferate but also comes on a body that is impressive in its own right. Sylvan Advocate has seen a lot of action based mostly on a 2/3 vigilance body for two. While I might harp on about this I can't see it making it into the drafting cube. The bar for gold cards is that much higher and this only reaches that bar when you get to take advantage of the proliferate. That won't happen on this if you make it on curve and makes the card a mediocre curve beater early or a low value proliferate effect late. I will be playing this in a lot of constructed decks but for limited events this is too much work and too narrow. 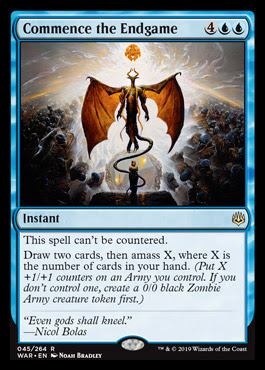 
For a trumped up Divination I find myself quite drawn to this. Krasis has proved the value of big uncounterable card draw effects. They feel incredibly safe. Like Krasis this also comes with a body of sorts. It could just be a 2/2 but it has much more chances of being in the 4/4 and 5/5 region. An uncounterable 4/4 flash with draw two on it sounds pretty good even at six mana. It is about as convenient as a six mana card can be and about as tempo positive as a draw spell can be. I feel like this is a card that makes you feel really safe and good about the game the moment you hit six mana. I am loath to put in a six mana Divination but this also seems too on point not to test out.