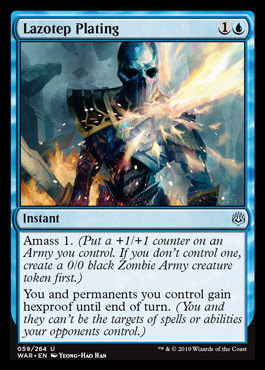 This seems to be a blue take on Herioc Intervention trading off indestructible for amass 1 and personal hexproof. It is actually a fairly impressive counterspell given how many things target you or your stuff. This hits under half of the instant and sorcery cards in my cube (going on the fairly reasonable assumption positive effects like Ancestral Visions are not coming your way and that discard and burn and removal generally are).  It is a smidge less than 40% of the spells but that is not the whole story as this also works on any abilities that target. This counters a Pilfering Imp or a Teferi -3 which no counterspells can. We over double the range on this effect when we consider these kinds of non-spell effects we can counter. Certainly the value of those will vary, they will often not be trading a card for yours but you still have the choice. Oh, and you also get your own token value so you are kind of getting a two for one to start with. This seems close to good enough without the amass so I expect it to do fairly well as it stands. This doesn't feel broken but logic suggests that it is very strong. I am not quite so sure about that and feel the need to test it. Being a protective card it should work best for combo decks and tempo ones and have less appeal to a control player. The control player wants to be able to sit back and counter a threat which this is poor at doing. 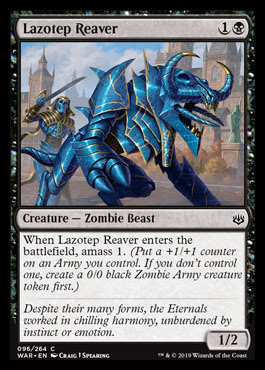 Well this is just the ticket. Black gets its very first two mana two in one dorks that is front loaded. Not only that but it has and extra toughness on most other cards like it and it has zombie tags. While this is very much a support card it is a pretty spot on one and a fairly well needed one as well. I anticipate this seeing a lot of the play that used to be had by Butcher Ghoul. This is a boring card and fair but it does what is needed. 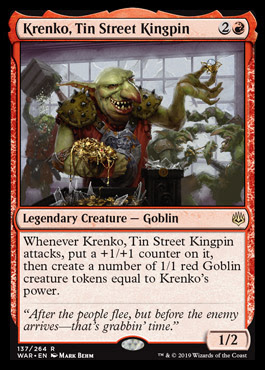 This is curious. Lots of payoff potential but also fairly high risk. This is exactly what the original Krenko offered but this manages to be more extreme. This is more vulnerable and has to make itself yet more vulnerable again by attacking in order to get value. With buffs and haste and protection and all that kind of support this new Krenko will be able to do some serious work. That however might not be worth it, even when it comes fairly naturally say, as would be the case in a goblin deck, you are likely just going to want a more reliable card. The ceiling on this card is pretty absurd and it is just three mana so it will certainly see some attempts at abuse. Given that this is not far off a Hanwier Garrison at baseline and attacks as a 3/4 the following turn well surpassing Brimaz I think this is too much of a free win card to ignore. Further to that the card has plenty of synegies and strong interactions within most cubes and doesn't need a build around to do impressive things. Power wise I prefer original Krenko but there is a huge step in cube between three and four mana cards. You can afford the risk of a three drop that just gets killed but that risk jumps massively when you move to a four drop. You need four drops to assure value for the most part. Tin Street Kingpin also stands alone far better without the need of in play goblins to speed things up. 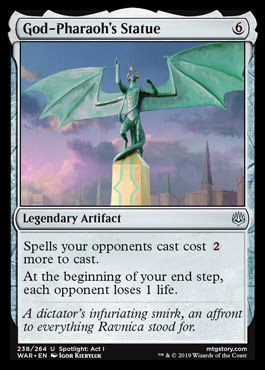 This is actually now one of the best things to Tinker out early to secure a win. There are simply too many answers to most of the classic threats that the EV on an early Tinker isn't what it used to be. This buys so much time you can win with fairly tame follow up. The issue is that this card does rather less as the game goes on and is not directly winning despite costing so very much. I mean, technically it is with the single drain each turn but that is not the kind of clock you are looking for! This is not buying you that much time! Mentally this is another 6 drop I can see making it all the way to vintage. It seems to unreliable to be able to get this out in time to be useful for cube play though. 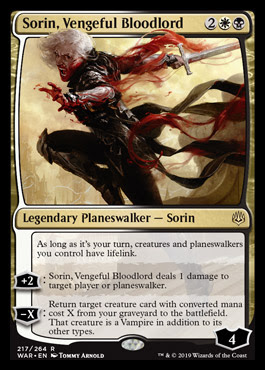 This seems very good indeed. It would appear to end aggressive decks pretty hard. Sorin pings, gains you a life and goes up to six loyalty as well as giving you another big life swing in the combat step. Sorin is also good at generating value as a recursion tool. He gets back a lot of good cards at a very reasonable loyalty cost. Doubly so given he can useful gain two loyalty a turn. Vengeful Bloodlord seems like the best of the Sorin walkers by a decent margin. He offers the lovely scaling of Solemn Visitor with the everything getting lifelink but he is otherwise much more rounded, versatile and simply powerful. He seems best for a midrange deck but also seems powerful enough that you would run him in aggro or control. Big potential swings and powerful complementary abilities. 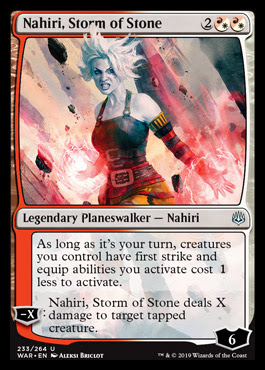 This seems fairly poor. All the abilities are at odds with each other and none of them are all that exciting. Really it is the need of targets being tapped that makes this weak. The damage is decent enough for the price given the control you have over it and the other minor perks. Sadly just hitting tapped stuff, especially at sorcery is really bad. It always is worse than you think it is too somehow. Equip cost reduction allows for some cool things but paying four to get that effect seems terrible despite how rare it is. 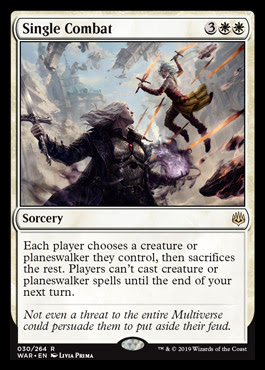 Potentially very powerful but equally an expensive and unreliable wrath. If you build very much around a card like this then it will be decent but in a general case this is just overly polar and liable to under perform. It is narrow and a bit on the fair side. There are at least other cards that do comparable things to this helping make a build around possible. 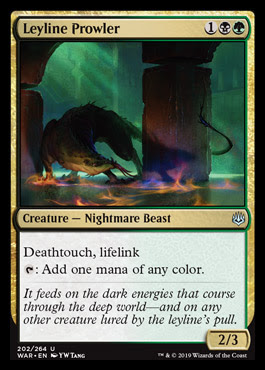 This is probably really good. It is a bit gold and three mana to shine in the drafting cube but I can imagine this just being one of those great cards. Just doing a bit of everything. Just a card that seems like it will outperform expectation even if it is just a very fair looking card. 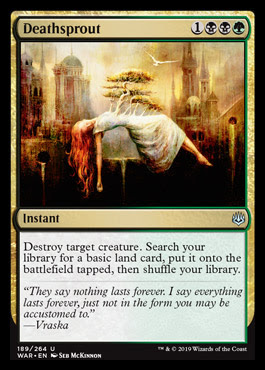 I like the look of this a lot. It seems very potent in big controlly Golgari and Sultai decks. They want mana, they want control and they want two for ones. This card does it all. It is certainly very slow as far as removal goes but I see it much more like a Solemn Simulacrum card. Just a great way to ramp into that hard hitting six mana zone. Imagine Tribe Elder into this into any cube staple six drop. Feels like that is going to be game against most things. Sadly it is just too narrow in application on top of being gold. At three mana it would be sufficiently broken to just be an auto include, even at sorcery I expect. At four it is going to be the preserve of the constructed decks.