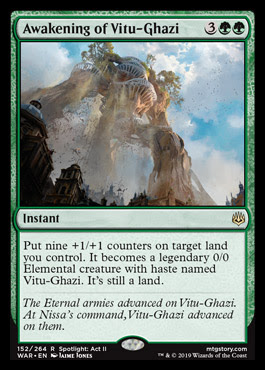 Boom. This is huge. This is so many stats for the cost. There is a surprising amount to unpack on this card despite being a fairly linear dork in most senses. A 9/9 for 5 mana with flash and haste seems pretty darn good. Add to that a pseudo protection against the many non-land removal spells in cube like Anguished Unmaking. So what gives? What is the catch? This is somewhat of a two for one on yourself to start. If this does just get Fatal Pushed before it does anything you lost the land and the value of the spell. The land might be minor by that stage but perhaps not. It is still a two for one. Further to that you actually need six mana available if you want to take advantage of the "haste" element of the 9/9 body. Six mana is still reasonable for a sturdy 9/9 but it isn't great by any means. Gigantosaurus is not a thing in cube! The main issue I have with this is simply that it has no evasion. Just a bit of trample would make this amazing. There are ways to force it through but you don't want to have to combo your top end for it to do stuff. Interesting card, lots of power but certainly one that looks better than it is. I think this is more akin to a big Ball Lightning a lot of the time. You wait till defenses are down and get it through in one attack with the flash or haste after which point it will be blocked, tapped, bounced (which is horrific for you) or otherwise dealt with. There are absolutely places I will play this but compared to a five mana Nissa (any of the three!) this looks like a poor choice. 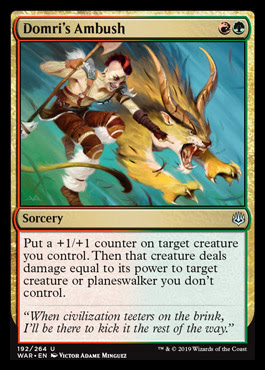 This seems shocking. Why would I not play Thrash (/Threat) over this? It is instant, has another mode and can be played in mono decks. All this has is the +1/+1 counter business. It might get play in a Gruul +1/+1 counters deck. That is only a might and a Gruul counters deck isn't presently a thing nor is it likely to be one anytime soon. Certainly not a thing better than any of the other colours you can pair with green... 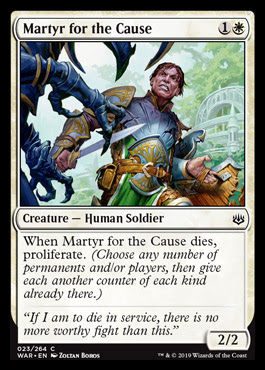 Martyr for the Cause 2.5

A nice fair little card. With the value on the back end of this it is going to be hard to use effectively. Either you need sac outlets or you need a deck that forces people to deal with your mediocre dorks. Neither of these things fits all that well with a proliferate theme. I can't see this packing enough punch to see play without a build around degree of synergy and I don't see where this fits into such a thing. Overall the value for mana is good but making use of both halves of this card in a timely manner is going to be a challenge. 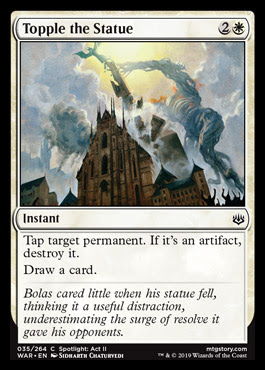 A lovely way to improve upon Smash. No actual ceiling increase but a nice utility cantrip mode for when Shatter would be dead. Really great design here. Probably not quite enough artifacts in my cube to run this but it is super close. It is a better card than Dissenter's Deliverance but it is rather clunkier and white already has a good range of removal options. If this were green it would be straight in. As a white spell it needs trialing out. 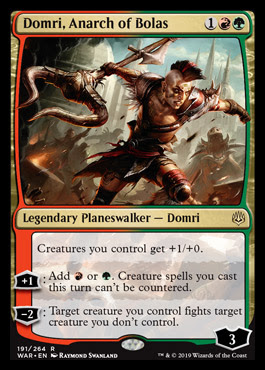 This seems highly comparable to Domri Rade while also being a fairly clean upgrade to him. Anarch of Bolas simply does a lot more and a lot quicker. Both have the near identical -2, the more restrictive newer one is technically reduced functionality but it is incredibly close. In practice it is a buff if only for preventing misclicks in online play! I can even be a buff in all kinds of magic if facing an ability like on Emissary of Grudges. Adding a mana on the +1 isn't as powerful as drawing a creature but that isn't what Rade does. In reality Rade draws a third to half a creature which is rather underwhelming. It is close to the mana in value or power but less reliable and less tempo. The uncounterable element is a nice perk that pushes Anarch a little further ahead again. Mana is great, removal is great, uncounterable dorks is nice and it turns out a +1/+0 to your dorks is also really good. The static ability is what makes this such a jump on Rade. Rade might give you a team buff ultimate a long way down the line while this is immediately a relevant boost to your team. Rade was also very good, just a little narrow. This is less narrow and more potent and so I suspect it will do fairly well in the drafting cube. I imagine it will crop up in a bunch of constructed decks too as decent three mana planeswalkers have a habit of doing. 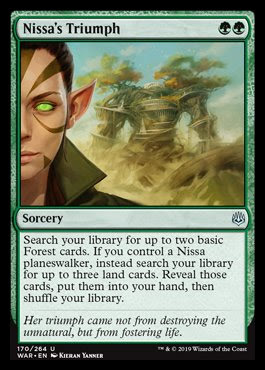 Well isn't this a delightful little card. The anti-Hymn to Tourach. An Acestral Recall of Sylvan Scrying! Nissa is not only one of the more common planeswalkers in cube she is also one of the stickier ones somehow and can sometimes generate mana should they wish to cast this right away when the going is good. Really all you need to make this playable is four to five basic forests in your deck. As soon as you hit that mark this is one of the cleanest two for one card draw spells on offer. While it isn't drawing you action as such it is still a fantastic thing to be doing. It should let you  tweak your deck more favourably as well with more action or more power. Hitting land drops is amazing and this is a solid tool for doing that. Shuffling is nice and cards in hand is nice and thinning the deck is nice. I imagine this will be cast in Ancestral Tutor mode over 10% of the time, perhaps in the 15-20% region if people are leaning on the effect and warping their play to get the maximum value. Double green makes it a bit narrow but all told, a deck with five forests isn't having significant issues with a GG two drop. Those two narrow elements almost precisely overlap and leave you with just a singly narrow card rather than a totally unplayable one as per narrownesses that don't overlap! Overall this seems reasonably solid. It will be a lot more impressive in lists able to play four of the buggers! 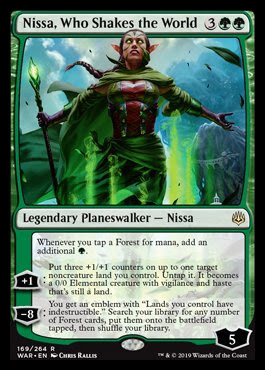 Nissa, Who Shakes the Earth 7

This feels like Worldwaker's +1 abilities got merged together and toned down a little while Vernal Bloom got added as a static effect. I think overall that is a win. You can flop out this Nissa and get two mana back right away and a good bit of extra board presence from the 3/3 vigilance land. This Nissa is safe yet still a scary threat. She has some very naughty ramp potential that makes her dangerous to ignore as well. Her ultimate is fine, it does something a bit different and somewhat useful. It is reasonable value and it rewards high forest counts. All told I think this Nissa has enough immediate impact and is a threat in enough different ways to challenge the five drop Nissa top spot. Direct and rapid power. Perhaps going to get a  little underplayed as she isbest in heavy green builds. None the less an impressive and scary looking card. 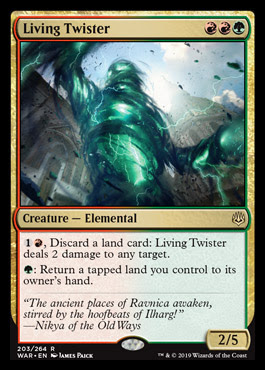 This is non a bomb but it is a card I have been waiting for a very long time. This is the missing piece in so many land themed decks I want to build. There are precious few ways to take lands in play and put them into your hand which is a useful thing to be able to do despite not sounding all that great. Mostly it is good for Seismic Assault combo kills but this little Living Twister has one all of it's own! While this is way too much mana to use for a combo kill it does still afford a lot of control and utility. A good defensive body, pseudo land protection, Siege-Gage esque Shock effect. All very nice. The colour intensity is a turn off for draft cubes as is the extra mana and resources you need to dump into this to have it be good payoff. Great late game card and reasonable flood insurance but not what you want on turn three or in a screw. Mostly I just see myself running this in all my Seismic Assault decks going forwards. It is backup Assault to help keep you alive when you don't have the real deal and when you do then you just pickup all your lands and win! I suspect this is rounded enough to just make it into basically every lands themed deck going in singleton. Beyond that it is probably close for a lot of decks and places but just not quite there. 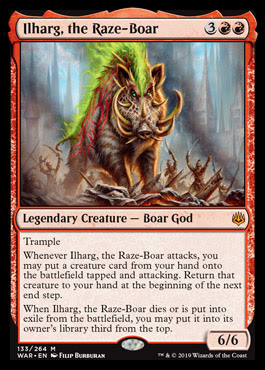 An impressive package. A five mana 6/6 trample is a good start point, very meaty and with the evasion to make it all workable power. Now let us jump right to the god bit where you get to put Ilharg back into your library if it would eat removal. Firstly, great design. It is not nearly so oppressive as indestructible or even return to hand. You have to wait to get back your new god and you don't get card advantage with it. This all greatly reduces the oppressive nature of some of the better old gods. It is also far less polar as it works against exile rather than exile removal being the only decent counter. A resolved Ilharg is pretty safe while a resolved Scarab God is a sitting duck to an exile effect. A Terminate however keeps things interesting against Ilharg while being fairly desperate against old Scarab God and a dud against Hazoret. There are some nice elements about putting Ilharg back into the deck. It increases the power level of the deck, increases the threat density, and it reduces your progress towards a mill death. Mostly it is just that when you are in a position to deploy five mana fatties that is what you want to draw! It will infrequently be a bad draw in games in which you have already played it. So far so good, we have a reasonably meaty threat with a cool new take on persistence. That on its own is close to good enough! The main ability however is pretty serious and I think propels this into the realms of drafting cube worthy as well as build around combo decks. You get a free Through the Breach whenever you attack with Ilharg which is saucy. It even bounces back to your hand letting you do it again or play it should you need. This is obviously game over with something like an Emrakul but it should also be pretty potent with any EtB effect cube dork. I can't imagine many games going on too long after Ilharg attacks and uses the trigger. All you really need for Ilharg to be a viable combo card is a haste giver. All told, the floor for this card is lower than that of the other five drops in red currently. It may be too situational or take too much work to get the payoff you need. The card might be a bit slow and a bit win more for general use. It certainly isn't a lock in for drafting cube but it has the power to give it a very good shot.