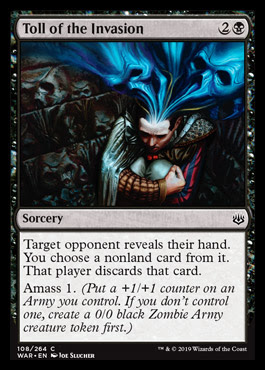 Toll of the Invasion 2

Does Coercion become good enough when you bolt on a 1/1 token? Very nearly but no is my guess. Three is just past the  critical point when you are on the draw. It fails to stop what you need it too and all you get is a 1/1 of stats for the delay. I would rather the less disruptive but cheaper Ravenous Rats if I an interested in stats or something like the quicker paced and more versatile Pilfering Imp if I want disruption as my focus. Toll isn't unplayable but it is certainly clunky and will have a fairly polar performance overall. I suspect it is only something I am using in a deck that has gone deep on a synergy this supports, say, an amass deck... I think five or more years ago this would have been a reasonable cube card but now we just have better alternatives and too fast of a meta for this to work out well. 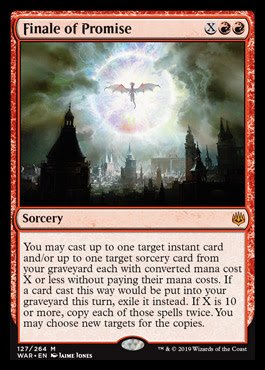 This feels like Mission Briefing meets Electrodominance. It also seems incredibly powerful if a little hard to setup. The range on this is impressive and in cube you can be doing broken things at X=1 all the way to X=10. Preordain and Lighting Bolt for 1RR sounds amazing and really wouldn't be that hard to setup. While there are few combinations of cube instant and sorcery cards you can use with this that don't make it impressive value the card remains a narrow one. A lot of instants and sorceries are sufficiently situational. Being forced into using two such cards together will likely mean you are getting poorer value from one. You can't use countermagic with this at all. The only things that are always going to be good are card draw and quality spells. Even burn is only always good in a burn deck. In a midrange or control deck burn needs non-player targets to be valuable most of the time. The real narrowness of this card comes in the build phase. To play this you need a very high count of instants and sorceries but you also need an even split of such things. Luckily a couple of top tier archetypes exist where that is usually the case, those being mono red burn and Izzet prowess. The latter should be very well equipped to use this assuming it hasn't already exiled the targets with delve spells and other Snapcaster Mage effects! Even so, I have not built with the aim of trying to balance instants and sorceries before except in delirium decks where they make up a much smaller fraction of the build. Finale of Promise isn't a complete disaster if you only use it on one thing but it is far from good (unless it is an Ancestral Vision in which case it is great). Self mill and looting empower Finale of Promise quite well if you are on the light side target wise. Whenever this is cast it will be impressive but I fear that will happen less often than we may need of it. It asks a lot of a build and of a game state. This makes it a card a bit like Collected Company. Top tier power that is just a little to hard to tap into for limited settings. It has a better chance of doing well in cube than Company at least. 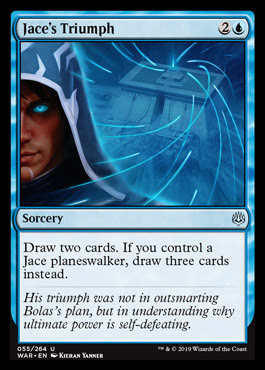 Baseline Diviniation with a three mana Ancestral ceiling. Draw three for three is solid and would see a lot of play. Divination isn't unplayable or all that bad but there are just so many draw cards spells between Divination and a cube slot that it might as well be a Farmstead in power level. So, where is this going to sit between drawing two and drawing three and how much above the draw two does it need to sit in order to get that cube slot? There are certainly a good number of Jace in most cubes and they see a lot of play. They are surprisingly good at staying in play as well. While I think (all the) Nissa are better at staying in play I think (all the) Jace are played sufficiently more that there is more time overall with Jace in play. That isn't the whole story though as available mana is a big deal too. Jace doesn't make mana and he often relies on instant reactive spells for protection to continue staying in play. This will all make it harder and less safe and likely to fire off the Triumph with a Jace down. What Jace's do do is draw cards and so what you typically need less of when you have a Jace is card draw. Obviously more card draw is almost always amazing but it is about what you don't have that might be of more help in the situation. A simple Repulse might save your Jace for example and that probably equates to more total cards, not to mention tempo. I suspect you can get the average cards drawn with this spell above 2.2 but I don't think that makes it all that good. You want to use a card like this on curve to power you out, you don't want it clogging up your hand as you hold it for extra value. It doesn't help you in the ways you want it to and it doesn't really synergize well with itself. I want to like this more but it just seems like quite an unrealistic card. The utility and options offered by Mulldrifter show quite how weak of a Divination Triumph really is. 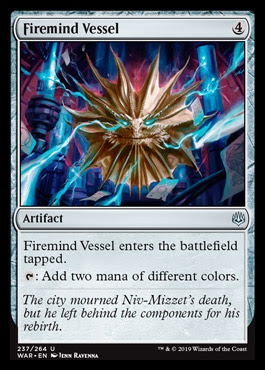 This will see plenty of play. Great ramp and fixing. This will be an EDH staple as well as a big player in cube artifact decks, multicoloured decks, and non-green ramp decks. My cube is presently tuned in a way that means Vessel isn't going to do all that much but if I supported more top end or more combo this would likely be a mainstay. This will take a lot of the play that Hedron Archive, Thran Dynamo, Khalni Gem and Gilded Lotus enjoy. It isn't entirely better than any of those cards and is less powerful than some. Despite that the impressive suitability of Vessel should elevate it to the top end of that group of bigger mana rocks. 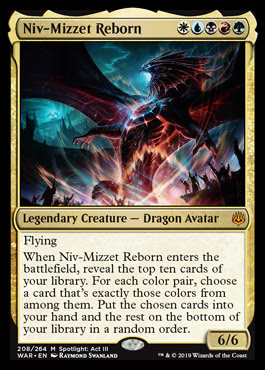 Obscenely too gold for the drafting cube but none the less a most interesting card. I can see this being a fantastic commander providing a good injection of action each cast while allowing for an impressively open deck construction. I have been theory crafting a meme-deck based around Niv which is 16 lands, Niv, the odd thing like Birds of Paradise, and then two cards from each colour pair so as to achieve an average 5 card hit with the Niv! It looks surprisingly good as well as being ridiculous! This is a fun card that I don't see having much impact in competitive play but it is exactly the right sort of design and payoff for a fun card. 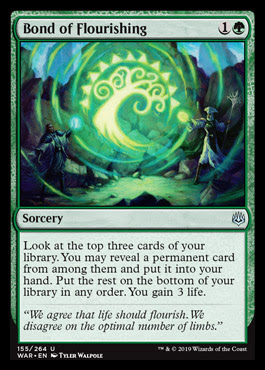 I like this a lot. As card quality goes it is fairly low impact  but none the less reliable and effective. It is like the bad bits of Anticipate and Simmer of Possibility with type restrictions and information reveals on top of that. While this is a far cry from an Impulse a lot of the qualities of Impulse are not needed in green. Instant is better for sure but it doesn't really matter in green while it is huge in blue. The same is true of the information concession mattering less for most green strategies. Even the most significant part, the type restriction is least relevant in green. Three life is a nice kicker, it is not relevant much of the time but it is game winning when it is. Green needs it less than most other colours but it goes a long way to making up for the relatively low potency of the card quality. What I like most about this card is the weighting of it. Two mana is not an unreasonable amount to pay for card quality effects and green can afford it more than most. Three is a good number of cards to see and given the reasonable range of targets should provide meaningful choices and returns a lot of the time. Power wise this is a worse card than Adventurous Impulse however it surpasses it in playability due to having the broader range of targets. It is not critically weaker in function and so the better playability will make it the better cube card. You have to play a massive instant and sorcery count before this has much chance of missing while Adventurous Impulse dances too close to the fire for potential targets in even the creature heavy decks. 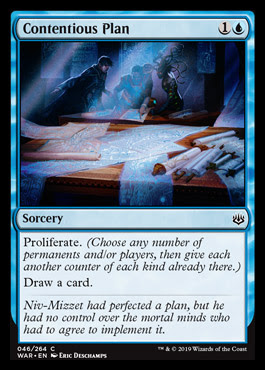 Well this seems fantastic. Cheap enough to be a very low cost include in any deck. Loads of synergy and scaling potential too. Seven out of ten is probably just me being overly keen on cheap cantrip proliferate effects. This might be too much of a do nothing too often as a blue card in the drafting cube but even if it does wind up failing there Contentious Plan will be making it into a lot of my singleton constructed decks. 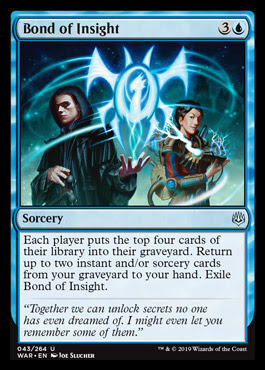 This reminds me of Sudden Reclamation. Mill four then regrow two things for four mana. Beyond that the cards are wildly different in where you would play them. The different targets, speeds and colours all assure that. So how good is Bond of Insight? Two for one on Regrowth effects complete with a bit of mill to up the options. It is a bit slow for the kinds of deck that want to employ self mill. In fact it is just too slow for almost any cube use. Four mana sorcery speed card advantage spells simply fail to cut it in blue. I can imagine this being used in a Gifts Ungiven combo deck that has mana exploits but beyond than this seems like too much of a luxury card. Powerful but hard to use well.