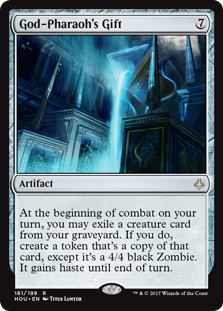 I never bothered to build this up while it was in standard despite it being one of the more distinct and popular decks. It just felt like it wasn't going to translate all that well into cube. Single copies of your key cards and relying on having a seven mana card in play, and for a period of time all seem to hamper the viability. Basically it is a lot of work and setup for something that is not entirely game winning or as broken as the things you can do in cube. Despite the issues my build was a success. I don't think in general that God-Pharaoh's Gift decks are good in cube still, I think I was lucky on a couple of fronts to be winning with this list. I do however anticipate returning to the archetype on multiple occasions. Not because it was really fun or really potent. It wasn't boring or anything it just wasn't notable on these fronts, it was an average to slightly above average amount of fun which is still a lot of fun. I would have to be some kind of sadist to find the average game of magic un-enjoyable given the amount I play! The reason I expect to return to builds of God-Pharaoh's Gift is because it is fairly uniquely un-tethered to colours in cube. The standard version was Azorius but that was primarily the need of Refurbish. Blue does seem like the best colour all round but I think you could make a deck comparably good in basically all the combinations of colours including mono. White all told is probably the least well positioned to do a mono build and would need to lean on artifact support heavily to fill up the bin. 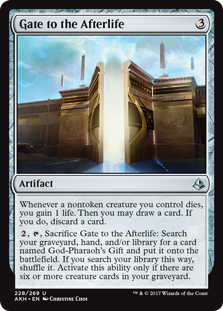 So what do you need to make a sensible looking God-Pharaoh's Gift deck in cube? Well, the two artifacts of course. After that it is really just ways of finding, playing and protecting your God-Pharaoh's Gift and ways to fill up the graveyard with creatures. You want self mill or looting and discard effects so as to fill up the bin with dorks as well as a high creature count. Gate to the Afterlife is one of your best ways to get the God-Pharaoh's Gift into play and so you want to be able to hit that six creatures in the bin mark. It is also nice to have some dorks that benefit from being made into 4/4 zombie tokens! I had a crack at a Simic build. I don't think it is the best colour combination, that is probably something red and blue so that you can abuse cards like Tinker and Goblin Welder. The thing is, when you are doing that sort of thing it is super unlikely that your God-Pharaoh's Gift is the best of targets and you might as well stick to Inkwell, Battlesphere, Wurmcoil, and that sort of thing. Simic is at least an uncommonly used pairing and the cards this list uses are not the most contested either giving it a different set of perks. Here was my list; 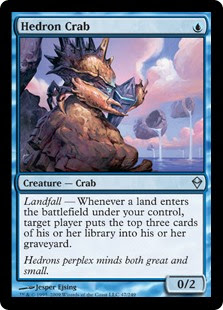 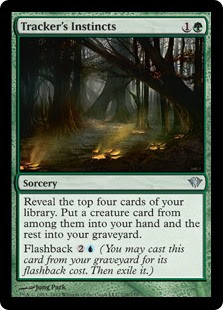 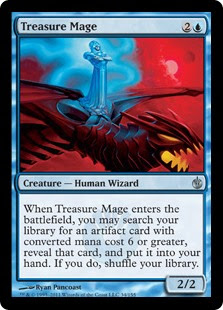 So the plan is pretty simple, simultaneously fill your bin with dorks while getting the God-Pharaoh's Gift into play. You have a smattering of things that dig and tutor for creatures as well as the Treasure Mage to get the God-Pharaoh's Gift itself. You have Witness to help get it back if it gets milled and the Reclamation and the Academy Ruins which might be a little overkill. You also obviously have the Gate which can find and play the Gift as well from anywhere bar exile. I strongly considered Triskelion for this list. It works nicely with Treasure Mage and God-Pharaoh's Gift and aids Simic in the removal that it sucks at. This list is one of the only times you will find Triskelion with anything at all over Walking Ballista! Triskelion also works nicely with the blue artifact ramp creatures we are running. 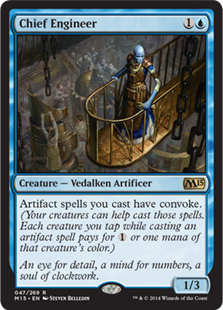 Grand Architect and Chief Engineer are your best way of powering out a 7 mana artifact it seems. It turns out they are the thing that makes the deck work and not just be a joke deck in cube. I started out with more green ramp creatures and found myself moving towards blue effects. They might be artifact specific but they are more bang for your buck and the rest of the deck is super cheap and not overly needing of the green ramp. Without them I suspect I would have gone for Trophy Mage instead of Treasure so I could breakup the cost and get a discount on the God-Pharaoh's Gift by going via the Gate to the Afterlife as my main method of getting it out. As both Engineer and Architect scale with the many (blue) creatures you are running you can fairly easily just cast the God-Pharaoh's Gift and so you don't need to phaff around taking the scenic Afterlife route! 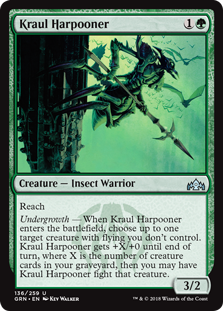 I ran the combo of Wonder and Kraul Harpooner for that one shot potential and it did rather help the deck. While Harpooner was rarely more than a hit of 12 when Gifted into play as a 4/4 with haste that was usually enough to close out the game. I would do some chip damage to my opponents as would they! You can afford a few do nothing cards like Wonder and Krosan Reclamation with all the looting effects the deck runs. They are generally a bit slow however and so there is a real argument for running Survival of the Fittest. It makes the Wonder Harpooner combo better and helps set up the other bits of the deck.

Hapless Researcher and Sidisi's Faithfull are quirky support cards. Both are cheap blue dorks to empower the artifact mana ramp. Both also allow you to put dorks in the bin so as to empower Gate to the Afterlife. I very nearly played a mini energy package of Minister of Inquiries plus Rogue Refiner but felt I was well enough covered on the self mill elements of the deck. Indeed, with all the undergrowth, discard, creature and artifact synergies going on in the deck it strongly feels like I must have missed several tricks. There are loads of cool and powerful cards you can abuse with those kinds of synergy on offer. There is almost certainly space to trim away, I am about as redundant as you can be on looters and recursion and could skim off the top of those. I could also lose the one shot combo and free up another two spaces. I would like to use one for something like a Venser, Shaper Savant or Reclamation Sage. This deck is painfully uninteractive and the ability to remove a problem permanent out of the way would go a long way. 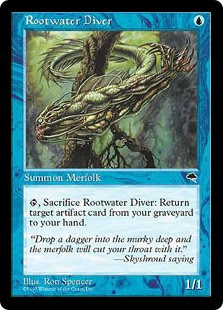 You could cut the green all together while retaining the style of this build. You could use blue recursive effects like Argivian Restoration and Rootwater Diver. I am not entirely sure what the other  builds would look like. I suspect they would all be rather lighter on creatures and as such the Gate to the Afterlife would be less impressive. Black feels like it would be used for tutors and hand disruption as it is in most combo decks. Other than Stitcher's Supplier no black dorks jump out at me as obvious includes. Red brings quality artifact recursion but it would also entail playing a good number of supporting artifacts. Doing that and keeping up the dork count is going to be trickier. Red has some great looting (mostly rummaging but comparable enough here) but given that we didn't dip into instants and sorcercies for looting and self mill in blue, which has an even wider range I am not sure that is a huge deal. I will probably try a black red version next simply to force myself to use an entirely new set of cards and thus likely a new approach. I am sure if I do a blue something or green something build that I will wind up with something much closer to this than I would like. I feel like there might be a Combustible Gearhulk in the Rakdos God-Pharaoh's Gift build which makes me want to build it sooner!