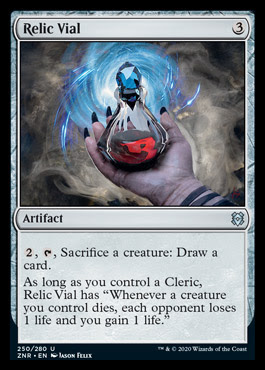 The card draw bit is very expensive. You can only really afford to play this is you can reliably have the cleric trigger active so as to have a bonus Zulaport Cutthroat / Bastion of Remembrance effect. That makes this both low powered and narrow although not to the point of being totally unplayable. 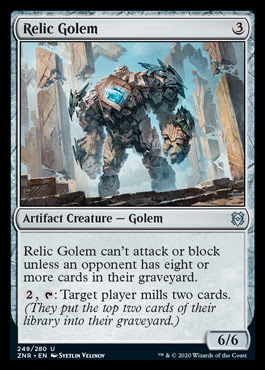 A Millstone on legs for fairly little extra cost! Likely too low powered and working at cross purposes but still, unique and thus potentially useful. 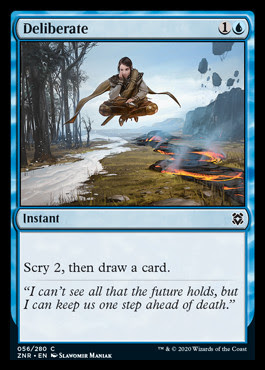 Not as much value as Omen of the Sea and likely less in the way of quirky synergy support from Yorion and the like. That being said, there are a lot of cards that look for instant and sorcery cards in cube, certainly compared to devotion and flicker effects, so this is not so down on the synergy front. This is a fairly bad Impulse, more comparable to Anticipate for power level. Certainly very playable but neither unique, nor busted enough to push past the other two mana options. 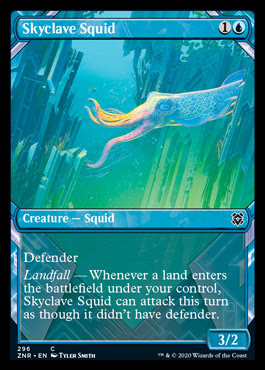 Big by blue standards but dull and not something any archetype is looking for. How many years before squid tribal is a thing and I regret not getting one of these?! Hopefully never. 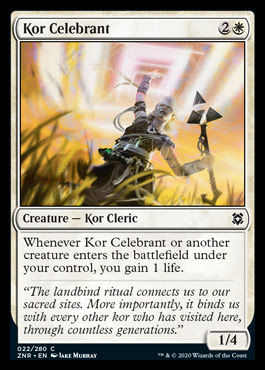 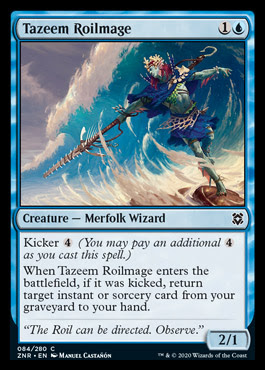 This has the same issue as Nullpriest of Oblivion except it also has much lower power. The two drop mode is just so weak that it doesn't add much to the card. 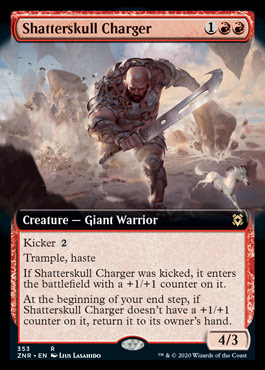 This is a 5/4 trample haste (or bad Charging Monstrosaur) with the option to be a good Viashino Sandstalker prior to then. This lets you have some top end while giving you things to do prior to getting there. It gives you a way to evade sorcery speed removal too like the dash mechanic. Quite good walker control and utility but fairly low power. Red five drops are off the chart and dorks you have to cast repeatedly are painfully low tempo. This is pretty close to cube power level but I fear the ceiling on the card is just too tame for what it offers. Red three drops are already fairly ridiculous. Compare this to Phoenix of Ash and it looks pretty inept. I will still give this a test as it is flexible and refreshingly interesting. 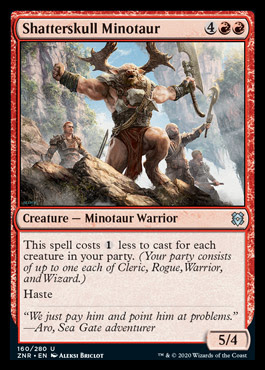 A bit double red and lacking evasion to be a big impressive payoff card. It might make 100 card singleton party lists and limited decks with a bit of that theme on the go. Cube lists are not impressed by this though. 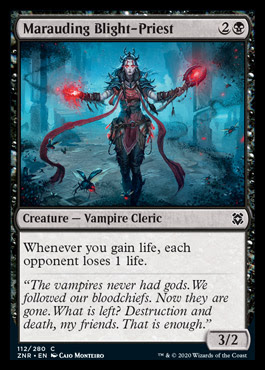 Very useful cheap synergy support card that was somewhat lacking beforehand. This will only see play in the incremental lifegain Orzhov strategies but it is a nice little threat in those places. EDH will be the predominant home of this dude. 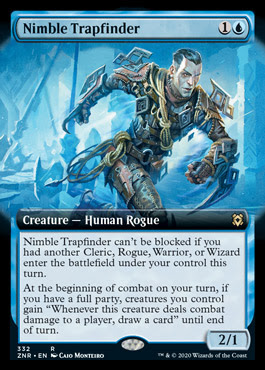 Rather win more and rather low floor for my liking. Likely worth it in EDH again though. I like the party cards that gradually get better as your party grows rather than the ones that are poo until you get to that full party aim. Low floor plus unlikely ceiling and no middle ground at all basically just reads as bad. 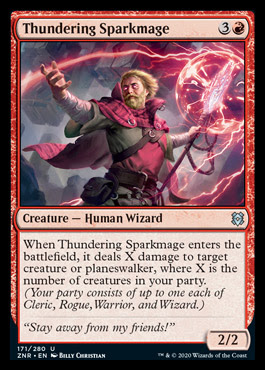 A bit costly to be there for much outside of limited play. Some potential in EDH but I suspect you can just do way better things with a 4 mana wizard in your party deck. 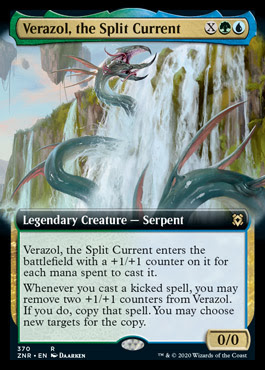 Another support card for kicker pushing us towards Simic (or Temur ultimately). Not super exciting but certainly pretty fun and with a nice degree of utility and passable floor. This card has one home and it is a bit of a comedy one much like the next card. 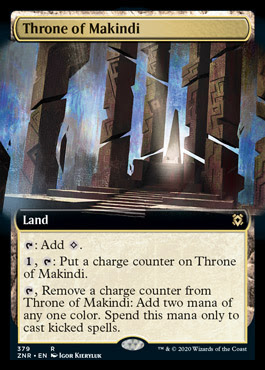 Normally lands that tap for two push a joke archetype into the top tiers. This however is not that. Mostly because in order for this to tap for two you have to invest three manas worth or tapping into it (two for the charge and then one on the tap for two which would otherwise just be a normal tap for one). Just play a Jeweled Amulet and don't limit yourself to kicker effects if you want that kind of ramp. I am being a bit harsh, this is still fixing and a land and still absolutely something you run in a kicker deck. It is just a long way off an Eldrazi Temple! 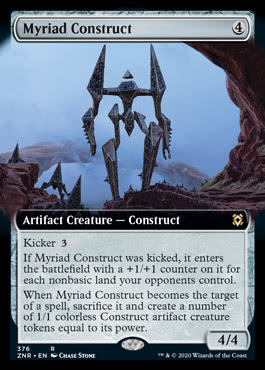 This would be good if it were not for the vast number of Wraths and planeswalkers and other untargeting spells or abilities that will kill this and laugh it it being do nothing 4/4 for four. This is very far from a Hangarback Walker. 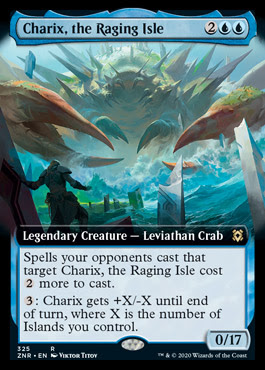 Assault Formation and High Alert just got pretty hard. This is massive in those kinds of deck and likely a fine enough card in most island heavy blue decks. This is hard to take down and hard to attack past. Mid game it hits for a relevant amount if you need it to and late it is hitting hard. It is a bit too much of a mana sink to put to use beyond a big wall and a little too dependant on having islands to really bring the power for the limited cube. 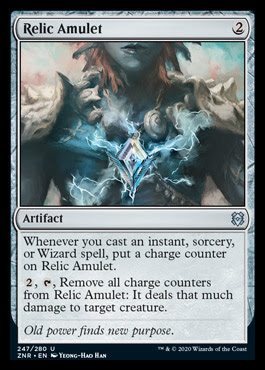 This could be reasonable creature control. It is fairly easy to charge this once a turn on average in a deck well suited to doing so and more in dedicated decks. In longer games this will do a lot of work. Sadly in shorter games this is going to be a really bad Shock. That is too weak for limited cube where things need to happen quickly, reliably and efficiently. 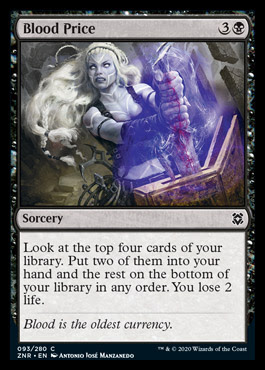 This appears to cost one too many mana for the power level of cube. 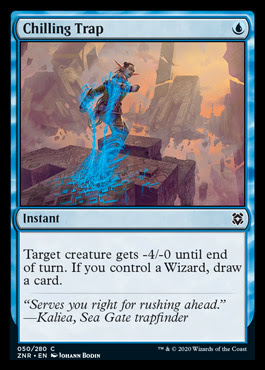 Narrow and likely worse than the tribal version but one mana cantrips with effects are hard to ignore. This is decent if you always have a wizard on hand. 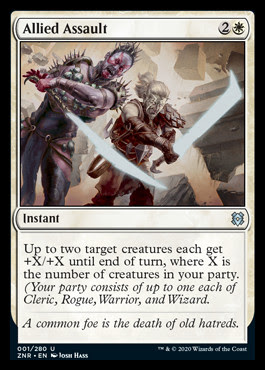 Hard hitting combat trick that does start to allow for a more tempo driven party build along with the green sorcery. Still generally not the kind of payoff you get excited about. Best case this is 8 face damage or kills off two blockers while keeping your attackers alive which is good but the worst case is a do nothing that in no way helps to build up a party.