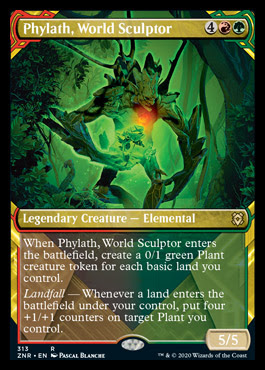 Seems like a bad Avenger of Zendikar. Makes less plants. Is gold. Puts all the planty eggs in one basket. Avenger is a very potent threat and general magic card so while this is never ahead of it in line it might still creep in to the club. Not the drafting cube club but the ranks of the playable at least. 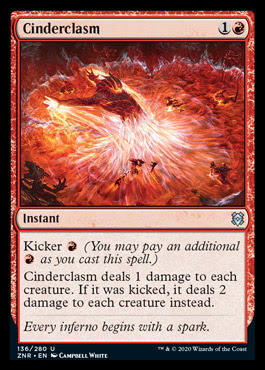 This is excellent and probably outclasses the classic Pyroclasm. Instant is a big win and the ability to vary the damage dealing gives a nice element of control. The only thing Pyroclasm has over this is cost per damage. This is cheap enough as mass removal goes that it seems like the least significant of all three differences. Red is becoming really good at midrange and control builds and this is a nice useful little tool to assist in those kinds of deck. I expect this to cut it in cube and give red yet another edge. Yet more early Arc Trail style blow out wins in store. 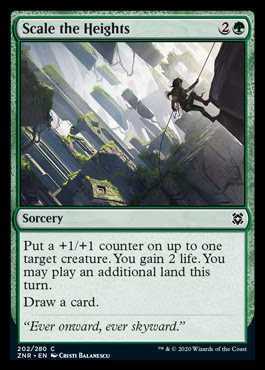 Mini Uro! Or probably better put Uro without escape. The counter is a nice extra but feels like it can lead to getting your spell fizzled or just wasted due to when you want to be playing this kind of card. This does a bit of everything but isn't very well costed for any of those things. A bit late for ramp or cantrip, a bit low tempo for life gain. An interesting type of support card that I suspect will struggle to get action in higher powered formats. 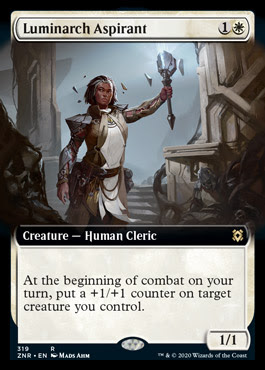 Hardly exciting but seemingly pretty powerful. This is a Slith that doesn't need to connect to grow and can buff other more suitable or scaling dorks too. This can attack as a 3/3 on turn three. This can make your 2/1 hit for 3 on turn 2 and become quite a scary beater. A top rate two drop offering options, power, reach, late game relevance, and synergy potential. I want to liken this to Rabblemaster but that seems perhaps a touch generous. Perhaps sat between Rabblemaster and Stromkirk Noble. 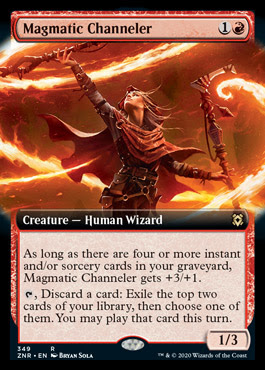 Finally a red looter that is good enough to compare with blue offerings. This feels very red and is about as far from a Looter as you can get and still deserve that title. This has several perks over a standard Merfolk Looter style card but also a few downsides. This doesn't draw cards while forcing you to use things found that turn. It is also a rummage rather than a loot which is slightly weaker. You need exile at least one card every time you use this which can be a burden on things like threat density and library size. These are somewhat minor drawbacks. A 1R 1/1 with tap to exile a card from hand to exile the top card of your library and be able to play that card this turn would still see some play. Channeler has quite a lot of perks over that. Starting with 3 toughness is a big help and makes this more durable and relevant on the board. Getting the choice of 2 cards you can play makes this far far better at getting what you want than a looter. When after a land this a fraction over twice as good. It is better immediate card quality than all other comparable looters although it can help less when it comes to setting up for later turns. Overall it is safe to say that it is a more effective card quality spell overall but not evenly across the spectrum. Already we have a really solid looter style card but the final ability pushes it from just a card quality card into the realms of relevant threat too akin to Jace, Vryn's Prodigy. Becoming a 4/4 in the mid to late game is a pretty big deal for a 2 drop that has provided card quality already. Most red decks should be able to satisfy the requirement fairly easily too. That feels like it makes this an auto include in most red decks. The cheap utility is amazing for the slower decks and the condensed power and punch will appeal to the aggressive ones. Very powerful, very red, and very well suited to cube. 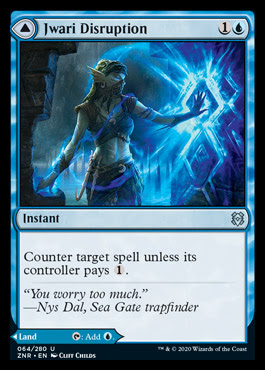 This is another take on Censor. Both help keep you safe early when they are likely active effective disruption. Then both help keep you making land drops and curving out beyond that. This is probably better in decks where you are lighter on the blue. Censor is likely better in decks that want to populate the bin with things. Jwari Disruption and Censor are closer than Memory Leak and Pelakka Predation which is impressive. Given that Censor is a great spell I can't see this not getting a significant amount of play and doing good work. 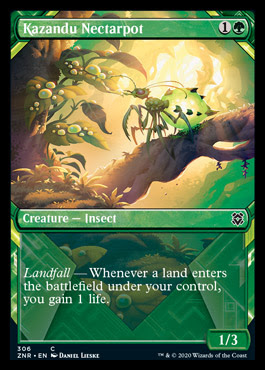 Low power but providing redundancy to Jaddie Offshoot etc as an effect you might well want. This sets up some infinite loops with Fastbond and is just a nice stall or buffer for land themed decks. 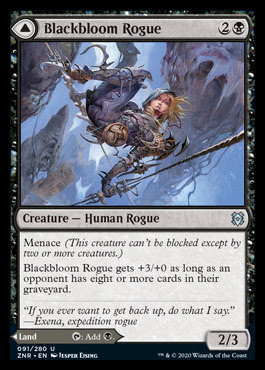 This is a hard one to call with the Rogue being so variable. A 5/3 menace for 3 is good and needs an answer. A 2/3 with menace for 3 rather less so. Black is very three drop heavy so it is rarely the point on the curve you need a filler card to help pad things out. Later on when land is most likely dead this is more likely a 5/3 which is nice. It is also fairly versatile in what it will do for you early game. A 2/3 blocks quite well and the menace does make him rather better at threatening opposing walkers. I feel like this falls into the camp of having to play it is a land rather than as a spell or as half a land but I would guess at this doing just enough to be useful in cube. 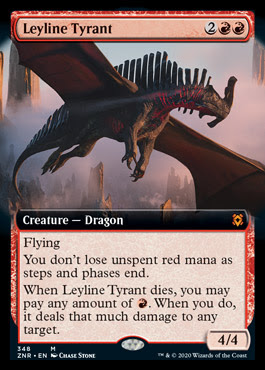 Well you can certainly do some fun things with this one! This works very nicely with some of the Neheb cards that give you a pile of mana to use. It also works nicely with Fires of Invention as a cool mana sink. Much as it does cool things and has cool synergies it is just a 4/4 flyer for 4 most of the time. It will die easily and usually when you have no available red. I suspect you will get more out of playing Thunderbreak Regent or Verix Bladewing. Very very cool for commander however, makes me want to build a big red mana deck and I don't even play commander! 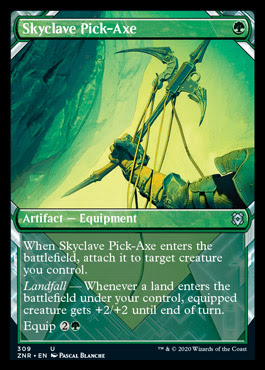 Nice cheap equipment with quite a serious potential power outlay. You can get this to be +4/+4 or fairly close to that on average in the mid and early game in aggressive decks if you want. For one mana that is pretty savage! It does need dorks, ideally those that scale with it well, and it also needs lots of lands, ideally sac lands. Being just a beatstick with little in the way of utility I think it is all a bit narrow and conditional for limited cube but it is very close. This is a powerful card. I can certainly see myself playing this in decks that want big cheap stats boost. Imagine the brutality of the Naya landfall deck these days being able to hit for 8 with a Steppe Lynx alike dude on turn two with this. Three lands, two of which sac, both the red and white Lynx, plus this is a turn three goldfish. Scary. 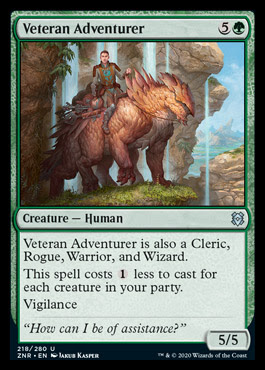 Helps to form a party and offers a lot of tempo when the party is full or nearly there. Sadly it is just a fatty and so I am not all that excited by it. I probably play it in any green party deck but it isn't a pull to the colour particularly. 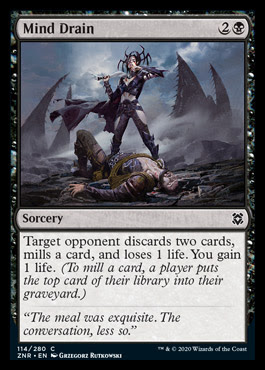 This might have some uses but the mill is just too dangerous in cube on average. A bit of a life syphon is cute but Mind Rot is a decent way off playable in cube as it is. 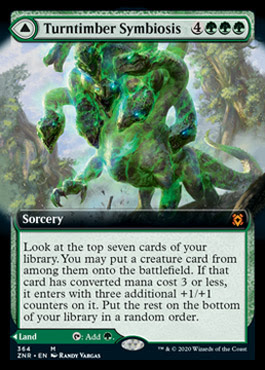 The cost of running this is low. The potential life cost is not much of an issue but the not being a forest is more harmful in green than in most other colours. Despite this there feels like too much upside for Turntimber not to make the cube. Seven mana is pretty easy to get in green. While this will rarely save you mana when playing Symbiosis in cubes without combos that cheat out fatties it is still card quality and reasonable tempo. A 5/4 Eternal Witness or Paradise Druid is handy! Diffing seven deep to find that Glorybringer is well worth those 2 extra mana etc. This is land when you need it and appropriate action at a reasonable cost late game. 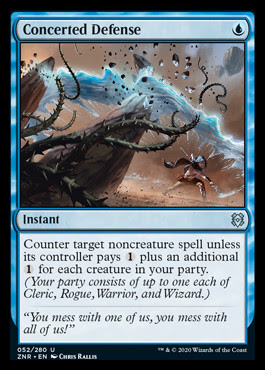 Much worse than Spell Pierce outside of a party deck and not that much better in a party deck. Playable but a reasonable way off exciting.