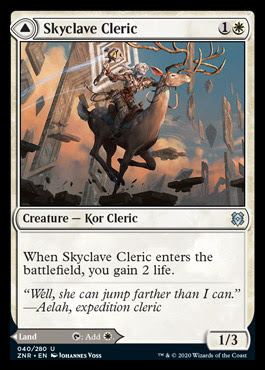 This is a curious one as the Cleric is really low value. This feels quite a lot like being able to run a sideboard card main at the cost of having a CitP tapped land. You only ever want the Cleric when you are against aggressive red decks or white weenie lists with a pile of 2/1s in them. Even when flooded a 1/3 and 2 life is doing very very little in most cases and is likely worse than just dropping the land. A bit of mild planeswalekr protection is about all Skyclave Cleric is good for against most decks. The number of places this helps and the amount it helps compared with the cost of running this instead of a plains overall doesn't seem all that exciting. A nice help to best of one in standard and historic for sure. 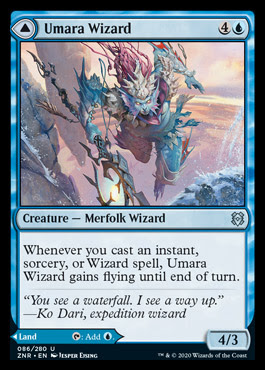 While a 4/3 partial flyer for 5 isn't all that exciting in the lowest power formats in magic it is nominally a lot more powerful than a 1/3 and two life. A powerful expensive card you rarely use on a modal card where you are very happy using the cheap mode turns out to be pretty good. I have cast a lot of Waker of Waves already in cube! This feels like a comparable card. A low cost commonly useful mode and a relevant if overpriced top end mode. Land most of the time but now and again a sizeable dork to pose a threat. Much as I like this I don't see it doing quite enough to last in cube. Just too much mana cost for the effect. Better off with a costlier card that forces through the damage cheaper like Pathmage Initiate. Don't see the goblin tag or being a one drop saving this one. 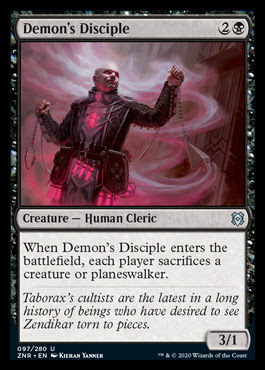 Fine playable card that works well in decks with some synergies. Too low powered for the drafting cube and too much redundancy from dorks like it to be very exciting. 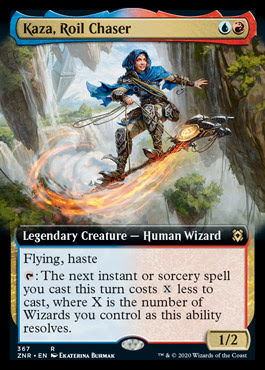 Much as this looks exciting it mostly seems like a bad Baral or Electromancer. Sure, you can get a big discount but you have to have a pile of wizards to do that. You can also only do it once per turn and then you can't use Kaza for anything else. Cost reductions are generally pretty powerful so this will probably see a bit of play here and there. More of an EDH tool to reduce the cost of something massive than a constructed storm combo card like Baral. 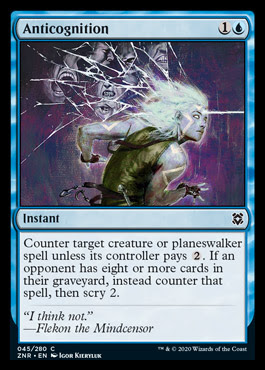 This seems strong. It has very good odds of countering relevant plays all the way into the mid game and then it has pretty reasonable odds of being a hard counter for walkers and dorks in the late game. Given that Essence Scatter is more playable than the best Doom Blade effects are I imagine this will do a good job of being the blue Eliminate or Bloodchief's Thirst. Being able to handle walkers is huge and propels this a long way. Sure, it is just a bad Quench in the early game but it does basically everything you want a Quench to do then and still does stuff later on. Yes, Miscalculation does this but pretty poorly. Perhaps there is too much escape and delve now in cube for this to be reliable but Drown in the Loch has seemed fine in cube so I can see this working out too. 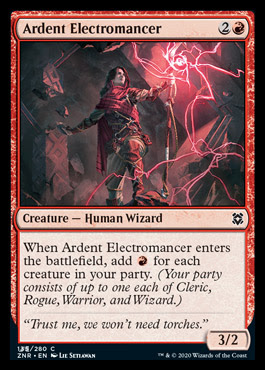 Cool card but I am not really sure where you are playing it. You can't really abuse the mana in a combo sort of way as the party element is so restrictive. You likely can't even use all the red it gives you as party seems to be best in multiple colours. This seems inconvenient and low powered but one only rules out things that generate mana or cost nothing if they are silly! Priest of Urabrask and Gix are both clerics so... 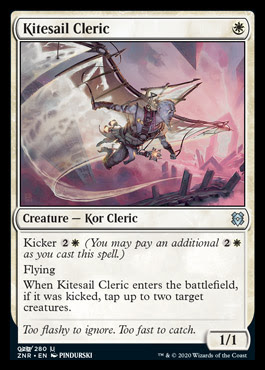 This is a bit of a Faerie Guidemother. It is probably better later on at the cost of being more of a Suntail Hawk early in the game. Unless white really takes to the skies as a general strategy theme I can't see wanting both in cube. Guidemother is a pretty fringe card already. This smacks of a one hit combo combo deck. No enough other warriors or equipment in cube to be viable but in tribal or combo decks this has some merits as well as a lot of potential power. 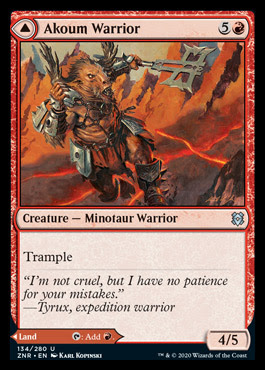 This is perhaps a little too late in the day for red. The Umra Wizard hit a nice level of threat for the cost and while this is a better dork the point in the curve it is at, combined with the sorts of situations you are in when casting a card like this, it is likely just going to be too little too late. Still, a very playable card that will make a lot of red decks. The question is how many of those will it improve and will it do so more than something like a Teetering Peaks. As with all the cards like this, they not only has to be worth including in decks but also enough of an improvement to them to make the cube. Being a tiny bit better than a card you can get as many of as you like in a draft without having to waste picks or cube slots  on isn't a big win like it is for traditional constructed formats like standard. 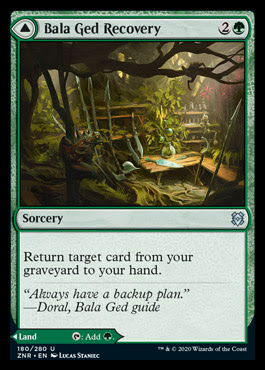 One of the best of this style so far. Regrowth is exactly the sort of thing you want on the flip side of a land. When you have mana you almost always have things to be getting back that are good. The longer the game goes generally the better Regrowth is and so this just complements itself very nicely. Regrowth is bad early where land drops are most important. This isn't very high power but it is top tier as far as utility goes. 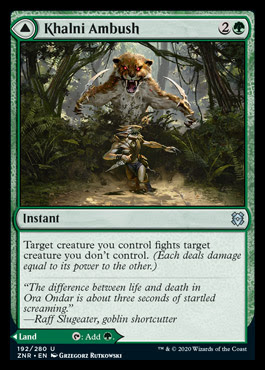 This is a nice way to take the situational nature and risk out of fight effects. Three mana is a shoddy rate but it is at least instant speed. It gets the job done well enough as far as green goes when you need it to and costs you fairly little to have that option. Being a playable removal spell in green makes this unique enough to overcome the low power of this card. 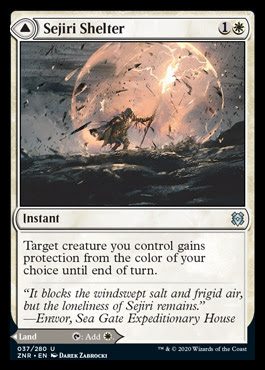 This is fine but not overly exciting. Narrower effects benefit more from having a land mode which works in this cards favour. The cost stops this being all that potent though. You are in the market for tempo with cards like this and you are paying more than you want to. This costs the same as Negate and does rather less, even if it does do a little more in places too. You can't really justify playing this as a spell in your deck and so it has to be mostly a land and then is it really offering more than a Plains that often? You do not see many mono coloured CipT lands in cube for good reason. I fear this is one of ones that despite being very playable is just too low impact to actually be worth the slot. 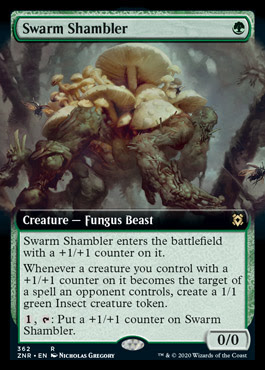 Isn't this the quirky cute little card. Pretty exceptional in any sort of +1/+1 counters deck be that Hardened Scales or proliferate or both or likely even something else! What is less clear is how good this is in a general cube. As a threat this is pretty lame, it has no evasion, is easy to deal with, affords no extra value and is slow as all hell. It isn't even very mana efficient in terms of raw stats. Free 1/1s are nice but you need to have dorks with counters on them for that to be all that relevant and even then it is hardly big payoff. This is very good payoff for party assembly. Not only is it powerful it is also well on theme with what a party deck is trying to do. This increases the value of party creatures who sacrifice themselves which until now I had been penalising against. Selfless Spirit is a great card and a cleric but if you use it it is in the bin and no longer adding to your party! Thwarting the Grave remedies that issue rather well. Thwart the Grave reminds me of Collected Company except it should be more tempo. It even reminds me a bit of Tooth and Nail! One card, two things into play. This is still great at 4 mana and should put you to a full party. Or just win the game if you are somehow getting back fatties. Agent of Treachery certainly looks a bit dirty with this and there are plenty of other big things you can get with the party tags for that overkill double fatty feel. At that point six mana is likely a bargain.This could see combo and vintage cube play and has an outside shot at getting into my cube. 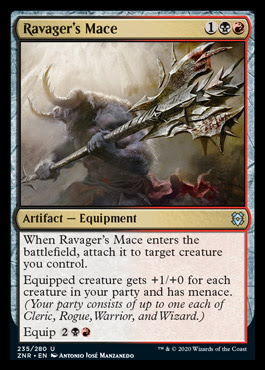 This seems pretty poo outside of limited.Certainly not wasting valuable deck space on this in a party deck. 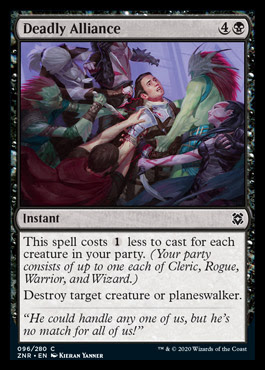 Another nice clean payoff card for party goers. Esper is looking more and more like my preferred direction for that archetype in singleton, unless I can splash a bit of red in as well somehow...  Not something you are playing outside of themed deck but a good incentive to do so. 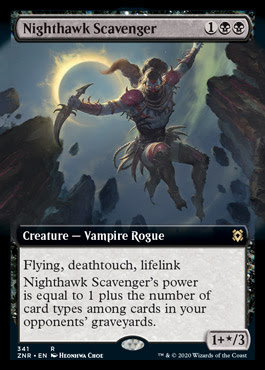 This is curious. Almost always an upgrade on Vampire Nighthawk and the potential to be an absolute beast. This punishes delirium style goings on which is somewhat new and probably not needed. I don't love cards that rely on the opponent at all but this at least has a very passable floor. It is probably good enough for cube even though I find it boring and thus am somewhat biased against it.