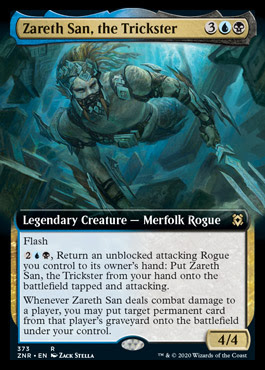 
This has a kind of ninjitsu that only works with other rogues. Seems like you rather need this aspect of the card for it to be much good. Flash helps a lot but mostly as a means to get to combat, not as a means to force Zareth through. Sometimes one hit will be game over, sometimes Zareth is just a Durkwood Boars. While most other rogues are cheap and evasive there is not enough of them to make this already polar and narrow card viable. Fairly powerful card in a rogue synergy deck, especially with a selection of these newer cheap milling rogues on offer. This isn't a patch on Fallen Shinobi or even Ink-Eyes without a very high rogue density and probably never really competes with the Shinobi. Powerful card but a little outclassed and a little narrow. 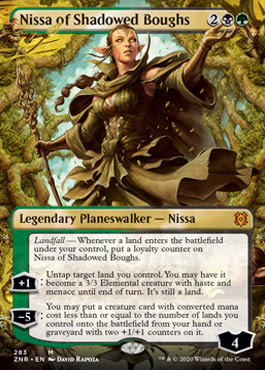 Nice design on this one. Overall this Nissa seems like a fine card but perhaps a little under par given that she is gold. The landfall is nice but I suspect it accounts for less than one loyalty gain a turn on average in cube. Even if you discount the first turn you make her. In some ways it makes her a bit of a five drop as you get more bang for your buck if you hold off. The landfall is a little bit like a kicker cost that just gets you a bit of loyalty based on when you cast her combined with a slightly variable +1 loyalty a turn. The latter part is essentially the same as just having more efficient loyalty costs on the abilities.

The +1 is a nice clean offensive or ramping effect. A 3/3 menace land pressures opposing walkers very effectively and cannot be ignored too long if going face. Alternatively it can just reuse a land and not even risk the thing getting killed as the animation is a may effect. Mostly this is one mana but in the right sort of deck it can be rather more than that from bounce lands to Cradles! That synergy alone should help her perform well in EDH. The -5 is also able to be used in a number of ways. It even has nice synergy with the passive allowing you to play this alongside a sac land as your land drop and have enough loyalty to use it and survive. If used on a card in hand it is a big tempo play effectively giving you a second go with your mana and getting a few +1/+1 counters into the mix. If used on a card in the bin it is value as well. The choice between the two means you don't need to bother with any supporting mill or discard effects. Nissa is versatile and convenient and has a reasonable shot at making it in the cube despite not being a bomb. 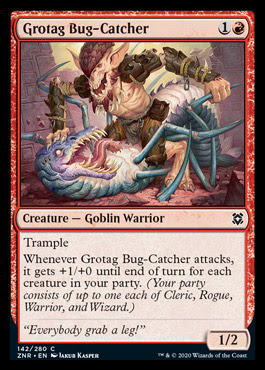 Not enough of a draw to be a party thing, not potent enough to be a goblin thing. I might run this as filler in a party thing should there be some strong draw to red but it isn't at all exciting. Red has warriors that are comparable to the ceiling on this already without any need of a party! 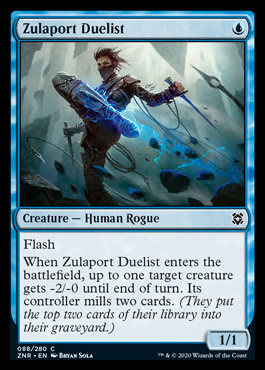 As a combat trick I am not all that into this but as a utility mill spell it seems to have a bit more legs. You can mill yourself and have this be a weak Stitcher's Supplier, you can mill no one if you prefer. You can take the sting out of most attacks with this too. Interesting card, too low power for use without a hefty synergy though. The effect is nice but it is rarely worth the card cost. 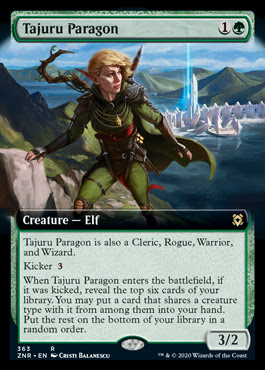 Tajuru Paragon 2 (as it stands)

Much as this is a solid party card there is no real incentive other than this to be in green. They have no other big payoffs and the worst overall dorks of those types. A 3/2 for 2 is bad, the kicked mode helps a lot but I fear the average cube deck misses on this most of the time. A useful support card that lacks things to support properly. 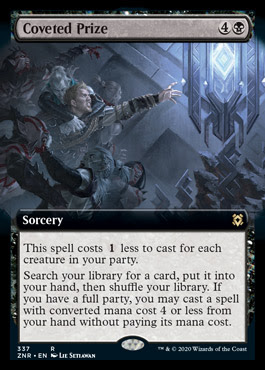 Speaking of payoff this is what we are talking about. Full party turns this into a Demonic Tutor that is also +3 mana. That is like cracking a Black Lotus and also getting to find a card from your deck as a nice free-be. Off the charts for power level but sensibly contained in a hard to pull off setup that inherently limits the power of any deck it is in. Still, this is the reason to be aiming for that full party. They needed to print some cards of this calibre to make the party mechanic bothering with as it is a very tough thing to pull off. This is exactly the right sort of design space to be allowing really bomb like effects to exist in. 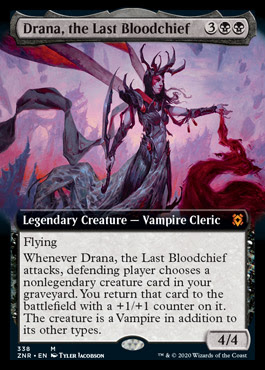 This is a bit of an Elder Gargaroth. Big and vulnerable until it gets attacking and then suddenly very impressive power and value that should win in short order. Drana does need you to have dorks in the bin to get back. This combined with you opponent having a bit of control makes me think it is a little too low in reliability, and thus only of average power. Cube five drops need to be really really good and this is just good. This has the power, just not the consistency. 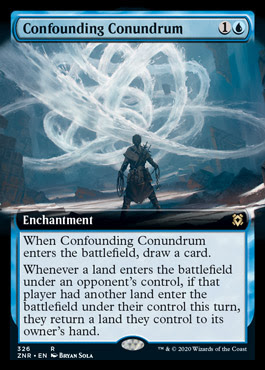 While this doesn't do enough to play main in a draft deck it has some serious constructed sideboard applications. It shuts down land ramp pretty hard and slows down sac lands too. It feels a bit like a Spreading Sea style disruption that hits on a slightly different axis. I imagine this will be found in boards in most formats containing Uro or saclands which is just most boards for now... A lovely thing to have kicking about with Yorion decks out there too. 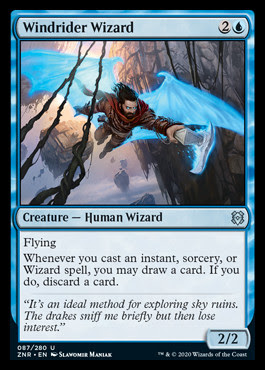 The body isn't great even with the flying. Lots of looting is nice but I much prefer such things at my behest and not tied to when I do other specific stuff. I suspect I am getting more useful card quality out of a basic Merfolk Looter than this. I might consider playing this in a deck aiming to self mill hard as it can scale quite impressively. 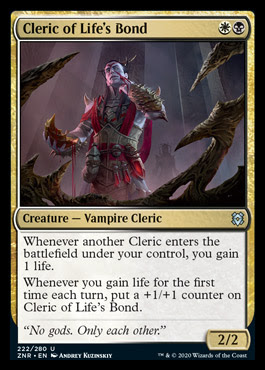 Part Soul Sister and part Pridemate this want to be all in one package is rather limited in abuse as it only triggers the life on clerics entering play and, much more damning, only grows once a turn. This is fine in like a tribal cleric deck I guess but it isn't exactly busted. Just high powered filler than does a couple of nice things in a couple of niche places. 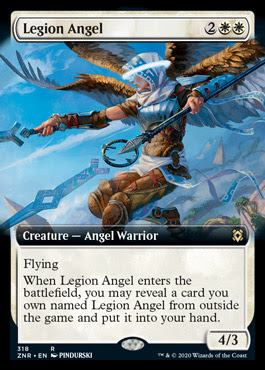 This is one of the most intriguing cards and coolest designs I have seen in a long time. So simple yet so much going on. It is a Squadron Hawk with a couple of twists, one of which is being a relevant threat! What is the best split of Legion Angels? Do you have 3 in the board to ensure your getting maximum value or do you run just the one in the board to offer the best odds on actually drawing one in the first place so as to get any value at all! Ideally you have a bunch of cards that let you find your one copy main otherwise that split it mostly just a waste of sideboard slots. Two or three main without effects that find them seems most likely. Fascinating. 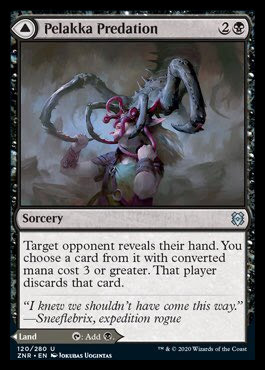 Memory Leak is performing well in cube at present and this is a fairly similar sort of affair so I expect it will do OK too. Leak is better as it is a much better discard spell and cycling is far more use late game against empty hands. This is only better when you are land light. You can play this instead of a land but the cost of doing that is not at all insignificant. CitP tapped lands are a tempo hit in cube that quickly gets uncomfortable. You can't afford loads of them. In more coloured decks you need those slots for fixing or for basics. Still, this is all a bit too convenient and useful not to see play. 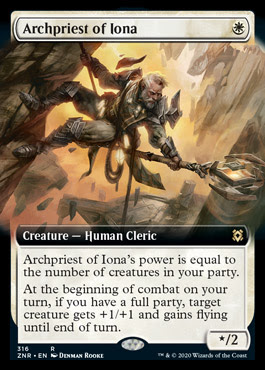 This is the other end of the spectrum from Coveted Prize for party matters cards that will see a deck of such things happening. This takes very little to become good and can become amazing. This will reliably hit for two and often hit for more. The ceiling of being able to hit as a 5 power flyer isn't even technically the ceiling as you can buff other dorks with better scaling and still hit for at least the same. This card combined with the high proportion of cheap quality party members in white pretty much ensures this is going to be the primary colour for party goers. Much as Demonic Tutor on a Black Lotus is insane the inevitable play style of a deck based around the party mechanic makes this a much better suited card. 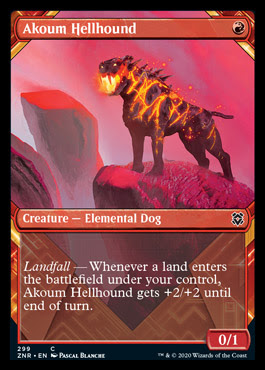 
Nice flavour and colour shift, works really well. Good card too as we know from Steppe Lynx. I don't think this quite makes it for cube as you can't always have all the sac lands, but it very easily could for things like modern. Hard hitting one drop that gets in a lot of damage fast. Perhaps we will see a return of Atarka's Command in modern burn! This is probably better in red than white even with things like Flagstones and Land Tax in white as red is much more keen to get in efficient early damage and much more able to handle a card becoming fairly impotent. White aggro needs to retain some degree of effectiveness from their dorks throughout the game. With that facet of the colours and with red having less other top qualiy one drop beaters perhaps this does last in cube. 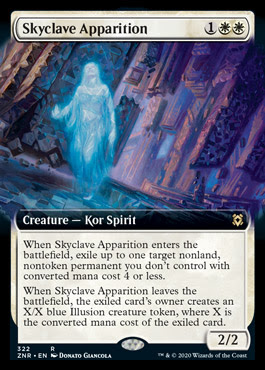 This is where Fiend Hunter and Baffling End meet. All told this card seems very strong. Tokens are pretty low value in cube so turning a relevant threat of an opponents into a token later down the line while getting a 2/2 body of your own in the mean time is a big win. This is a sufficiently strong removal effect that it will be flickered pretty frequently by the likes of Yorion and Restoration Angel. Apparition answers most problems in cube and does so with good tempo, value and synergies. Jitte or a 2/2 blue illusion? Retrofitter Foundry or a 1/1? Hazoret or a 4/4? The best case for this is Utter End on the back of a Grey Ogre. The worst case is a whole lot better than it is for the other Oblivion Ring style cards.