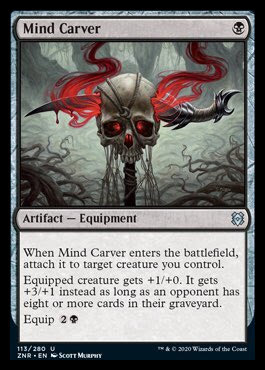 Cute but not powerful enough without the enemy threshold like thing being on which you shouldn't really support in cube and cannot rely on even if you try and turn on. 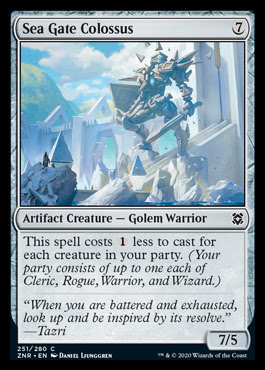 I'm not sure I want this that much in my party decks. It is just a dork and it isn't very good at supporting party mechanics being high cost when the party is empty and needs filling up. Best thing about this is being a warrior which is one of the more awkward types to find in suitable or high powered guises if you are not in red (or green). 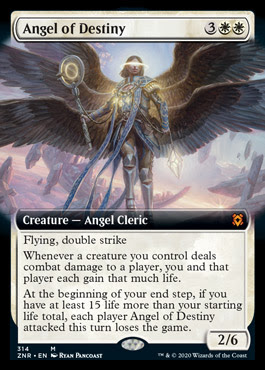 This is a fairly silly card and yet also a  well designed one. It works fairly well in a life gain matters deck. It will give you a lot of lifegain triggers while it is in play and turn all your dorks into super life linkers. Assuming this survives it should win the game pretty fast in a number of settings. It however it gets killed you have wasted a load of damage and gained it as life instead for potentially no real gain. I think it is pretty powerful as a stand alone dork in a midrange white deck or even a control one and a great dork in a lifegain deck, especially the more attack focused ones. I think it is too clunky and unreliable for most cubes however. 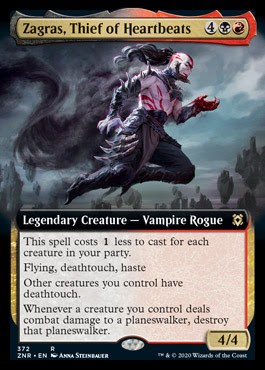 This needs to consistently cost four or less to compete in the cube and it will not. While quite powerful as a party themed deck card I am still only rating red as the 4th best party colour. I'll play Zagras in a party build already with his colours but he isn't a strong pull to go that way. 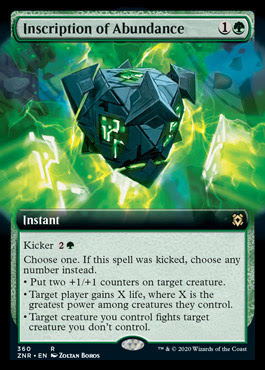 Finally a fight card that is absolutely playable. This is a bit of a Selesnya charm meets Collective Brutality, both of which are strong cards. Being mono colored and a decent removal spell in green is a big win for this even if the removal is conditional and not the most reliable. I suspect the counters mode will be the most commonly used being both a decent combat trick and a reasonable persistent buff for the mana. It even has bonus synergies with a bunch of cards like Walking Ballista and Glen Elandra Archmage. Life is the least exciting mode but it is always welcome on a modal card and will do some good work against red. All told this is a huge card for green giving options and interaction at instant speed. Five is also pretty reasonable to expect this getting kicked quite often. That will be a huge blowout play as something gets huge, eats something else, gains a pile of life and then perhaps wins a combat as well! This card makes me excited to play green and not enough cards have done that lately. Green needed more interaction and this is a great start, decent power, option rich and all without feeling off colour. 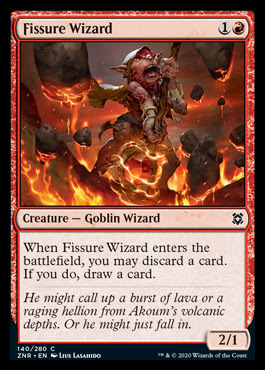 This has minor support potential being cheap, having some relevant types, and most importantly having a rummage effect bolted on. Low power but clean and direct. 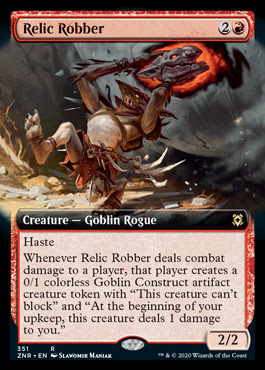 This wants to fool you into thinking it is a Rabblemaster like card which it surely is not. This needs to connect to do anything and will frequently offer no bonus value. The stats are very poor for the cost. Perhaps worst of all you might just empower your opponent with things to sac for benefits or perhaps just the city's blessing! 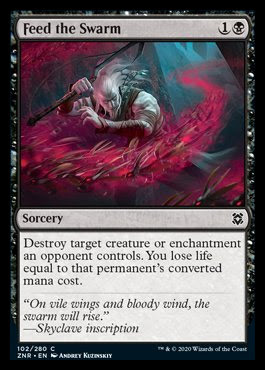 Well now... While I can see why some people think this is sacrilege I am fine with it. Just being cold to something or being forced into running clunky artifacts to solve your issues isn't a win for the game. This still feels very black and is still weaker than other colours abilities to handle enchantments. Feel, style and flavour are the more important aspects of the colour pie and we are fine here on those fronts. This might be viable for cube. It is weak but it is unique, versatile and cheap. Worth a test but likely just a bit too much of an ask for what it offers. Instant speed would have made it great however. 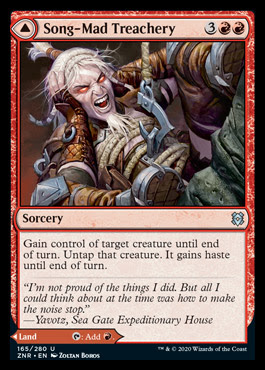 Feels like this might be too situational and expensive to merit the cube slot but it is still getting tested. It is better than the 4/5 dork for 6  and will win more games directly but it is also so much more situational that I think it becomes hard to justify in the cube. 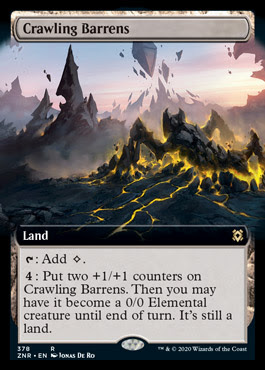 I really like this man land. It is a reasonable mana sink and can scale to what you need it to be. It could fairly legitimately be a win condition for control decks. Not having to animate while you grow it lets you keep it super safe if you need to. It feels like Raging Ravine but a little more flexible. A fairly hard hitting late game man land rather than a cheeky little hit here and there manland like Mutavault and Factory. 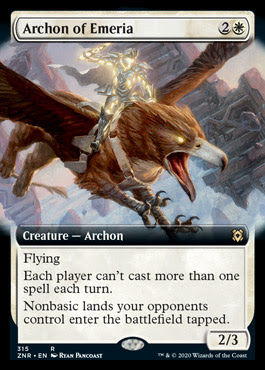 This is quite nice but it is also just a bit meh. I am never playing this over Thalia 3 as she is so much more of a rounded package. She is more threatening and much more of a tempo play tapping down lands and dorks. Just limiting spells to one a turn is a bit annoying but is much more relevant against combo than anything else. I expect this Archon to get ignored a lot or killed easily when needed. I don't expect it to do much work while in play either at pressuring a win or providing value. Certainly a suitable hate card in certain metas but I can't see many cubes without storm in them running this. 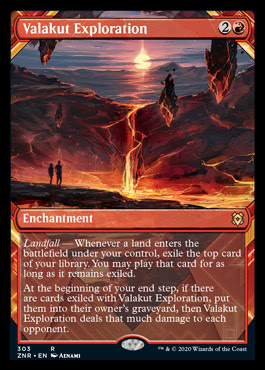 This either turns all your land into a ping or a card draw. That seems pretty good for three mana. Where this is awkward is that you need lands to trigger this yet you cannot stockpile lands with the ability so as to ensure you trigger it every turn. If you could assure a trigger every turn then this would be some kind of amazing Phyrexian Arena, arguably even a Torch of Defiance! It does give better odds of having gas each turn as you draw a spell and you have that to play or you draw a land and get another effective draw to potentially play. Where this really shines is in a deck that has effects that give you additional lands drops. This is then like your own personal Horn of Greed  where you can chain off a load of lands even when this exiles them. This seems like a fine but fair card advantage engine in a cube draft and a great one for a build around deck. 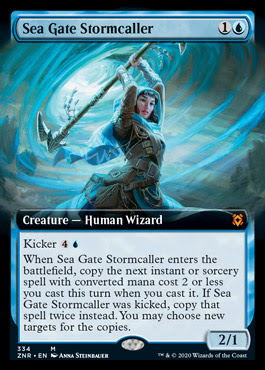 The proactive Snapcaster Mage! While this does have some upsides over the classic Snappy it is not a better card by any means. You need to line up cards in hand for this to be good where as Snappy is generally a great top deck and has little impediment to your play. You might try and hold a Ponder when you have this so as to get value but that might turn out to hurt you more than help. This by far and away the main reason Snappy is the superior card. Stormcaller also has a smaller range of targets but that is fine, the cheaper spells are mostly the kinds of thing you are looking to Fork. No flash is another thing this loses to Snappy on. The Perks of Stormcaller include protection from graveyard disruption. The ability to gain extra value with the kicker, although that is super minor as the cost is so extreme. Having other better things to do all the way up to 8 or 9 mana while still holding this and a relevant Fork target seem hopeful to say the least! The best thing about this kicker is that you can find it more easily with Coralhelm Chronicler!  You also don't exile the card you copy meaning you can delve it away or indeed flash it back with Snappy at a later date which is nice. The best thing this does compared to Snapcaster is actually tempo based. When you copy something with this you don't need to pay the cost again. If I copy a two mana spell with this I get a saving of two mana. This plus Searing Spear is a big tempo play at four mana while it is closer to par for tempo at six mana as it would cost to do with Snappy. This is certainly good but it might be a little bit too narrow and clumsy for cube like Dreadhorde Arcanist turned out to be. It is certainly better than the Dreadhorde for cube but this is no bomb.