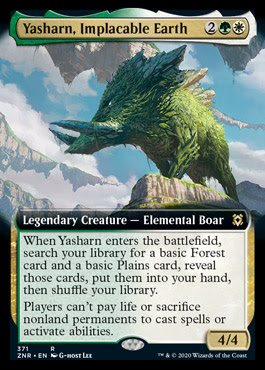 Angel of Jubilation meets Krosan Verge!? This is just a nice meaty value dork that has a surprisingly annoying disruption effect bolted on. So many good cards have life costs or indeed sacrifice things in order to work. Sadly I suspect what kills this off in cube is that you really need a couple of each basic to play this effectively and that just isn't at all likely in the current meta. You only play Selesnya when splashing one of the colours or when you have three or more colours total. All of which mean you are unlikely to get full value from this. Very powerful and well worth revisiting if Selesnya becomes a competitive strategy again. 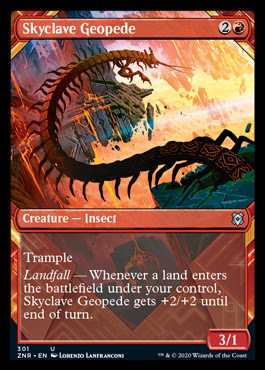 Too much cost for just a beater, especially one with a single toughness and relying on support to perform properly. 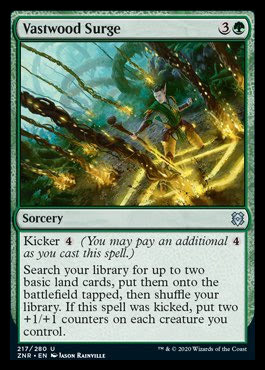 A nice solid big ramp spell. More of an EDH thing than anything else with most other formats being too fast, but still a noteworthy card. There are now I think four cards that do roughly what this does with a variety of minor twists. That makes this card effect still fairly rare as far as singleton goes. 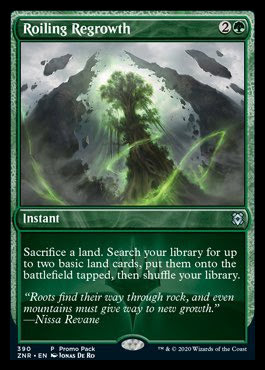 Harrow but not vulnerable to countermagic at the cost of having the lands enter tapped. Harrow was best when you could abuse that untapped aspect and have it ramp in combo with cards like Heartbeat of Spring. While lacking the combo application this is still a solid card that you will happily play if you are in the market for instant speed ramp, extreme fixing, and landfall! Too slow for most cubes though sadly. 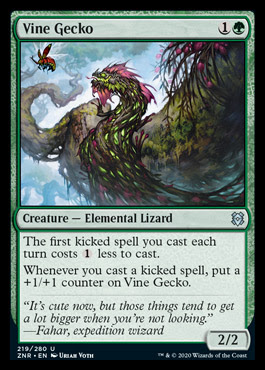 I guess I'll play this in a kicker themed deck if that ever happens (although Izzet is looking like the best colour pair for such things presently, perhaps we can push it to Temur). Not enough incentive fora kicker deck yet. 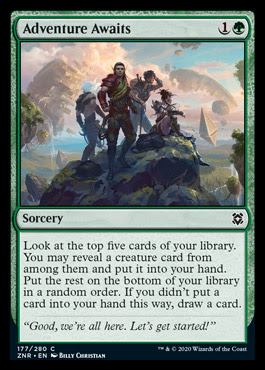 I really like the design on this one but sadly I fear it is just too expensive. Never missing is a big win but only digging for dorks is too limiting. Why not just play Commune with Nature if it is dorks you need? Why, if you think you risk not hitting something you are after would you not play a card quality effect that hit lands or action and actually get a consistency boost? This probably needed to be instant and find lands to make the cube. That or cost 1 and only go 4 deep. Hopefully next time they use this design they will push it a bit harder. 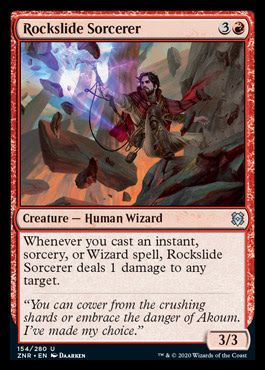 Much as damage to any target makes this a little tempting it is just far far too fair for a 4 drop these days. This is vulnerable, low impact and needs support. A couple of decades ago this would have been really hot but now it looks unplayable. 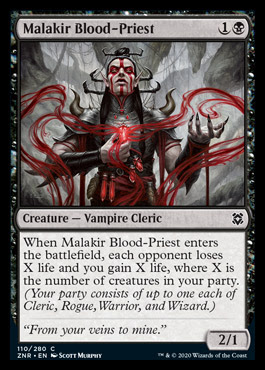 Not the party payoff we are after. This just has a terrible body for the cost and an effect that is hard to leverage for singleton. It is quite nice when it is more than two but that is too rare to risk such a low power and impact card. 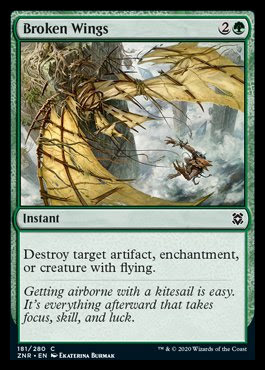 This seems to be Vivien Reids -3 at instant speed! Nice to finally have this complete iteration of the card after having skirting around it for many years. It is sadly going to be too unreliable to see main deck action in cube decks. I am pretty sure I made the claim about Crushing Vines that if it were this instead it would be good enough. We have power crept enough for that to now be wrong and leaving this without much hope of action despite seeming decent. 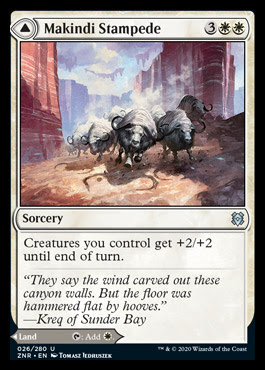 This compares pretty well to Shefet Dunes and that was a pretty decent card. Both line up very nicely with the game plan for white weenie. Dunes saw some play and this should do so too. While the effect of this is double that of the Dunes it is actually worse in all other ways. While Dunes is good and saw play it wasn't impactful enough to hold the cube slot. This I fear could well suffer the same fate. Dunes is quicker mana which is what aggro decks want. It also gets to be a land all early game and then also be team buff. Makindi is one or the other. It really all comes down to how much better the +2/+2 is and how often it leads to being able to perform a devastating attack and I suspect it is not quite enough. 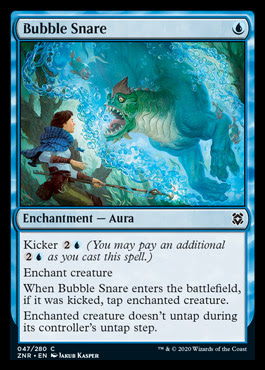 Cheap and versatile. I like it but it is just too soft as far as removal goes for cube. I can see it getting some love when things like devotion or auras are affording good synergy. 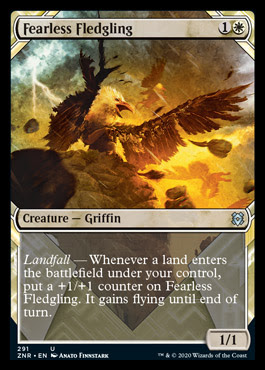 Pretty boring card but seemingly pretty strong. This is an evasive threat that scales up. It needs answering and reminds me rather of Stromkirk Noble. This is better at growing and better at getting through. Fledgling is no bomb but it is certainly a good beater. A bit rough as a late game topdeck but still no worse than most one or two drop beaters in white. 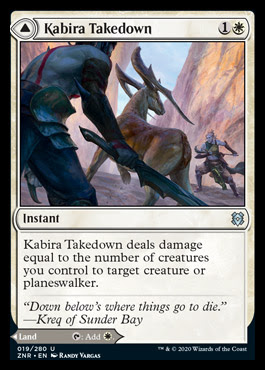 Seems like this probably has to make the cut. While you can only really play this in creature heavy decks thus somewhat ruling out control this is just a fine little card. The removal is decent tempo and scope when you have some dorks and removal is the sort of thing that you want access too all the time without it costing you in other aspects of your gameplan. This is pretty much exactly that. More consistency both in your mana and in your ability to resolve issues at hand. Cube boards do tend to clutter up fairly well so this will still see play in plenty of control decks that just happen to be a bit more heavy on the dork side of things and be solid there too. This is exactly the kind of card you can play as half a land or a whole land should you wish and that gives some nice deck tweaking ability. 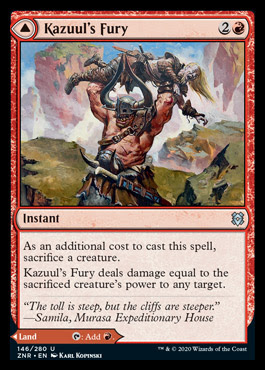 Fling is a very powerful and commonly used tool in magic and so this will certainly see play backing it up in those specific archetypes. As for more conventional cube uses this is quite a wild card. On the one hand it is a burn spell you can send anywhere at instant speed and have do a pretty good rate while also being a land. On the other hand it is very unreliable, risky, and awkward. To make it an impressive 4 or 5 damage spell you are going to be two for one-ing yourself and putting a pretty relevant card into the bin in the process. This means it is either desperation or winning the game even if you are lucky enough to have that option. Often this is doing two or three and looking like a bad rate on cards and mana. Seems bad compared to burn spells but when compared to land that do damage Kazuul's Fury looks rather more impressive. Given Ramunap Ruins was banned and there are such things as creatures you want to sacrifice even in limited cube decks this probably has to good enough. 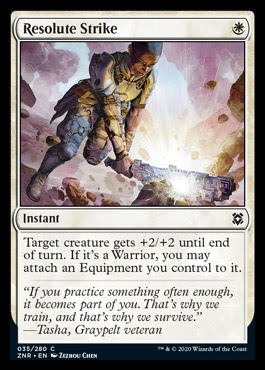 This has some combo potential with the likes of Colossus Hammer but is otherwise not a constructed card nor a cube card. 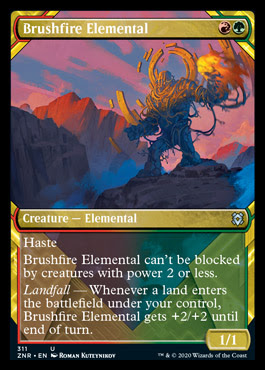 An upgrade to Plated Geopede for the most part. Certainly one of the hardest hitting two drops on offer for a stompy deck with reliable land drops, something this set is going to really help achieve. Too gold and niche for limited cubes but the power is there. As a two drop it is not all that much better than Geopede but as a play on later turns with land drops to make it is wildly better. With a mana dork you can legitimately 5 your opponent on turn two. That is utter filth. Green is also a good colour for a good landfall card as you can have things like Ramunap Excavator and Wrenn and Six to ensure you are hitting. Explore to get even more landfall triggers! The more I talk about this the more it seems like one of the best all time two drop beaters. The only thing keeping it reasonable is that it is narrow in a couple of ways. 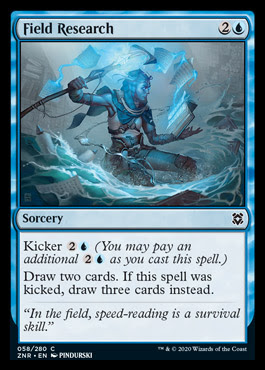 Not quite the upgrade to Divination I was after (instant or a mana off or some scry!) but this is still a surprisingly decent card. There are plenty of places I would run this over Mulldrifter. Low powered but direct, flexible, and scaling. 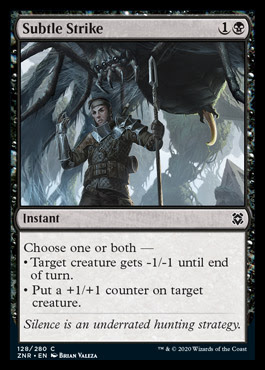 A bit conditional and low powered but something I would consider in a deck using +1/+1 counter synergies. 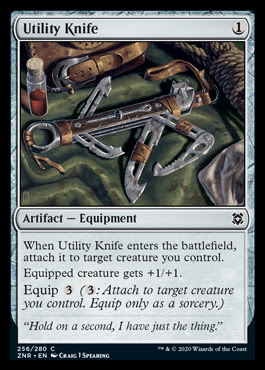 Much as I can't think of anywhere I would run this it seems to cheap and unique to be entirely useless. 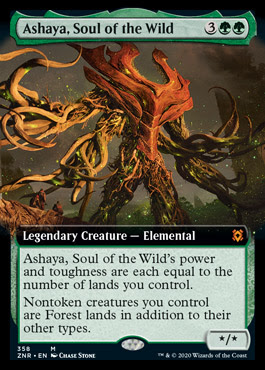 Ashaya, Soul of the Wild 1

Mmm, Acid Rain me! This can be big and can help you make a bunch of mana it does nothing well. The former is conditional and mostly useless due to lack of evasion. The mana is nice but just do yourself a solid and play something like Cryptolith Rite, Earthcraft, or just some mana dorks and then real threats in your five slot. Perhaps there will be some abuses for creatures with the forest type but that feels like a janky three card combo using five drops...