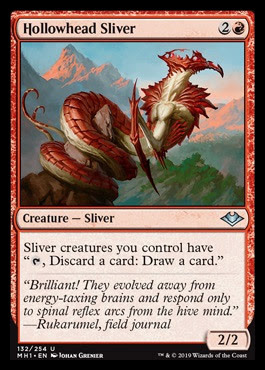 As a stand alone this is a lot better than Rummaging Goblin. Red looting has come far enough now that being better than the Goblin is not enough to get you play. I am playing a card like 3 mana Sarkhan over this when not tribe-bound. This still seems like it is only making it in a Sliver deck and probably not all that many of those. It is just a bit slow and fair for what is usually a pretty aggressive tribe. 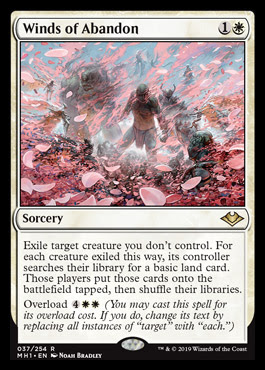 Settle the Wreckage meets Declaration in Stone meets Mizzium Mortars. This isn't a great spot removal spell nor is it a great mass removal spell. Despite being a one sided Wrath it is still slow. Luckily it is passable in both modes and those two kinds of effect pair up incredibly nicely resulting in a great card out of two mediocre halves. This kills anything, it is cheap to do and is exile quality. It ticks enough boxes to be a solid spot removal card on a very similar power level to Dec in Stone. It is a great control card and a midrange dream. Aggro decks will be fine to play it as well. I can see it making it into lists over Swords to Plowshares in some aggressive decks. This will be in most white EDH decks and a lot of white cube decks. 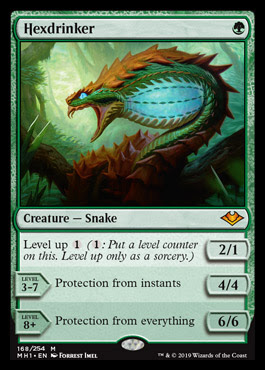 Well this is great all over. It is a 2/1 for one which is already making it one of the best green stand alone aggressive one drops on offer. Then you can scale it up into a mini Progenitus over time. While 9 mana is a lot it is both 8G (rather than WWUUBBRRGG!) and can be split over as many turns as you like. It also has a fairly decent mid level stop off. A four mana 4/4 with protection from instants is cute. It lets you threaten the final level undisrupted and forces opponents into preemptive removal. A four mana 4/4 is also a great deal when it has pseudo haste and likely did a couple of turns work as a 2/1 before all that. This is a great card early, mid and late. It isn't excessively mana efficient but likely more so than most level up style creatures. It is also a lot more convenient that most others as well. Given how cleanly this levels up you can have this in final mode attacking on turn four with only three lands and nothing else. Of the hands I can imagine winning that are only four cards this and three lands feels like it is very much one of the better options. That start will goldfish by turn six and really tax answers. If you are on the play they only have one and two drops to deal with a 2/1. Three mana to deal with a 4/4 pro-instants and then they can only deal with it with a mass removal spell, they can't even block. This card needs to be respected. It will steal a lot of games where it isn't. I can imagine a lot of people having to blow good removal on this ahead of time for fear it will ultimate and just win. Like Fleecemane Lion but substantially better. 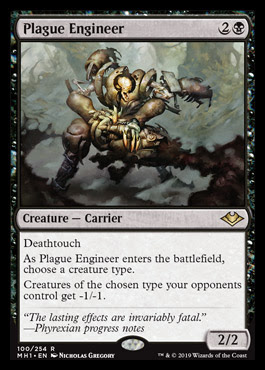 A nicely fixed Engineered Plague which was always a tedious and brutal sideboard card but not something worth playing main. This is comparably brutal but is entirely playable main. It will do a good impression of Plague Mare while having a better body and some potentially ruinous ongoing effects on the game if not removed. The deathtouch ensures you will get more value out of this beyond the initial death of things it forces. It will either trade with a bigger dork or bait removal. I see this killing swathes of thopter tokens, spirit tokens, goblin tokens and soldier tokens. I see it killing loads of elves and humans too. Plaguemare has been a huge addition to cube. This is easier to play and splash and is also more powerful. It is far fairer than the namesake enchantment as more decks will be more able to deal with it if they need to and in a prompt manner. Scary card but reasonably well considered. 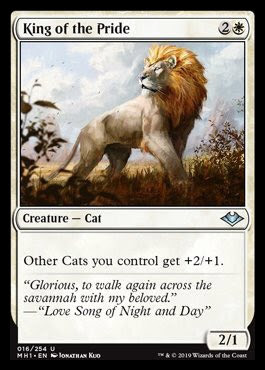 Quite a flimsy lord being both 3 mana and 1 toughness however a +2 attack bonus is terrifying. As Undead Warchief, Tempered Steel or just a good old Dictate of Heliod informs, you need very little time or board with a +2 power buff to close out a game. Cats, unlike bears, have a decent number of other supporting cards as well as a healthy pile of decent power level cards to build with. What is especially rare is that cats have more top notch one drops than almost any other tribe. Humans, elves, and goblins are the only ones that seem to outclass them but it is fairly close. Considering they are also some of the bigger tribes in the game each with over double the number of members than cats it is all impressive. Anyway. this is a good lord. Vulnerable but well worth it. It puts cats on the map. Now we just need a cat that protects. Leonin Rune Giver....? 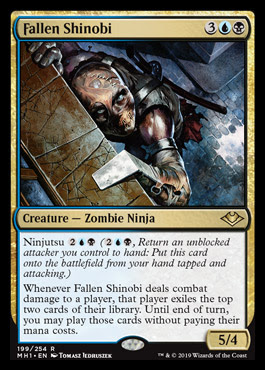 This seems pretty mental. It is very easy to get the first hit in with a ninja if you want to. You have to be aggro, tempo or midrange but that is fine. This offers enough punch for low enough mana that one hit could well be all you need. On average you are hitting a land and like a two or three drop. That is good already but the high roll is just filth. If you get a planeswalker and anything else close to useful the game is over. A lot of combo and control decks will fold to hitting some specific cards even if they don't help you that much. Even on a total wiff you still have a 5/4 dork in play that they cannot afford to have hit them. You probably have something nice back in hand like a Baleful Strix or Kitesail Freebooter ready to reuse that EtB effect as well. Even just playing this for 5 mana isn't terrible, the stats are OK and the threat is super high. Basically the floor on this card is pretty decent, the ceiling is game winning and the average performance should sit reasonably far off the floor as well. More gold than I would like but cards like this are devastatingly powerful in cube. No one likes having their cards used against them! It is grueling and more powerful than you would expect. The only thing against this card is that it is hard to include in lists. 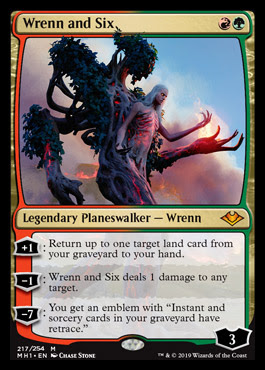 I was expecting our second go at a two mana walker to come in War of the Spark but I guess it makes rather more sense here. This certainly dumps all over two mana Tibalt and sets a very different bar for a two drop walker. The loyalty count is decent as are all three abilities. Wrenn and Six has better self protection than a lot of planeswalkers, not just two mana ones. If the -1 can't deal with the threats then the +1 should at least put it out of reach of an easy death. The +1 is fairly impressive value as well. It is straight up putting cards in your hand. It works very nicely with the new Horizon Canopy lands, sac lands, cycling lands, any looting or self mill etc etc. While it isn't great odds on being a card on turn two those odds will increase significantly over the course of a game. I feel like this is either a slow Arc Trail or a more threatening Ramunap Excavator. Or indeed a mix of both. The ultimate is no joke either, you do have to deal with Wrenn and Six else you are just going to eat endless Lightning Bolts from the bin and die to it. This has a lot of power and utility yet somehow isn't oppressive seeming. It will be when you have a white weenie hand with three 2/1 dorks in it! Even then if you are on the play you are only going one for one and trading a mana for two life. I think this is a fine card for any deck to run. It is probably even fine in many of the combo decks that can play it! Mostly I mean it is good in aggro all the way through to control. Powerful, enticing, yet seemingly quite fair. I think while it does good stuff for two mana it is slower to do it than other two mana effects and it quickly loses power in a relative sense compared to other planeswalkers. By turn five and six what this does when you flop it out isn't going to produce a massive swing on the game. 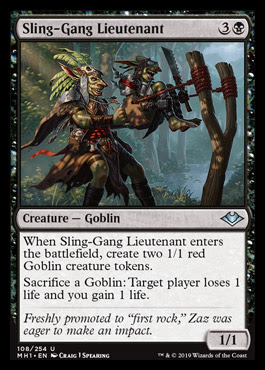 This is fairly impressive all round. It is decent in it's own right but it is exceptional in two different kinds of synergy deck. It will shine both in goblin decks and in aristocrat Blood Artist decks. It is one of the biggest pulls to black on the goblin tribe with Patriarch's Bidding being the only other contender really. Frogtossers are all well and good but it is a fairly low key support card that rarely finds room these days. This however is a lot of bodies plus an on-theme sac outlet that will really help to get players dead. This is reach, utility, value and oozing with synergies and scaling options. 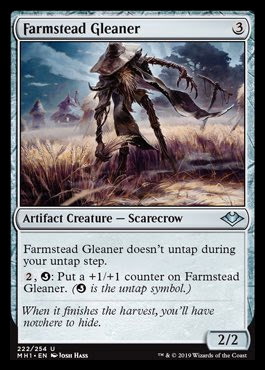 Pretty shocking card but it is at least able to grow indefinitely with a Grand Architect in play so some redundancy for Pili-Pala combos of sorts.
Posted by Nick Nobody at 16:31