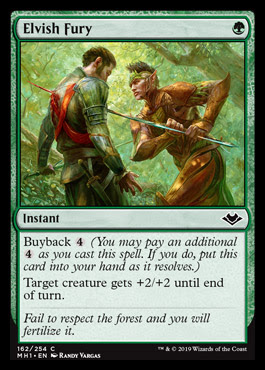 Broadly just an upgrade to Astral Slide. While this doesn't trigger from other peoples cycling of stuff it does have cycling itself and will trigger from it too. It is an instant uncounterable cantrip Flicker or it is an Astral Slide as you need. There isn't quite enough cycling in the cube to make this a good drafting card yet but really not at all far off. A nice boost to constructed cycling decks though. Quite possibly enough to push the archetype in commander in a more mainstream way.

An elegant card but not enough raw power or utility to make it in cube. Mostly this is just a bad Giant Growth for what you want it to do. The late game mana sink aspect is too underwhelming to get excited about. 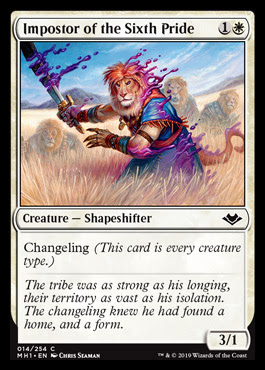 Imposter of the Sixth Pride 1

Very interested to see the return of the changeling mechanic. This is a cheap aggressive card too meaning it could well wind up in a number of curious places. It is rather bland and white is the least exotic colour so likely not actually doing much but still... Mothdust Changeling managed to be the MVP in a ninja deck I did recently. Simply off the back of being cheap and a changeling this has a wiff of a hope of doing something. 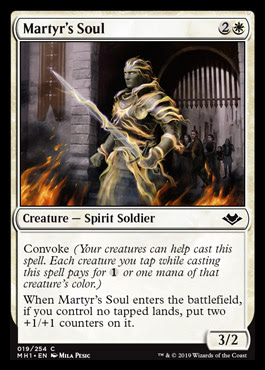 Ouch! This is impressive for a common to say the least. There are a number of ways you can cheat this out quickly as a 5/4. Mostly they work against an aggressive plan but not too much. It is certainly less risky than a Venerated Loxodon. Much as this is cheap and big it is a little inconvenient and rather vanilla too. Just big has never been that impressive in cube. Tarmogoyf is weaker in cube than any other 1v1 meta and so this pricer, smaller, whiter, more awkward card shouldn't be in the same ballpark as the Goyf leaving it a little underwhelming. Still an interesting card with decent potential. 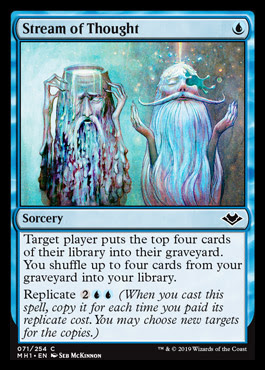 Lovely art and interesting card but I don't really see where you are using it. It isn't really a mill card nor is it a recursion / longevity one. You are not looking to do both mill and reshuffle at the same time. When a deck arises that does want both elements then this card will have a home as it is very efficient at base line and has some scaling with the replicate. All told it quickly becomes inefficient when you replicate it but it is still a useful perk to have. It feels like it is a bit of a mill equivalent to Burst Lightning. Certainly an interesting card and given that it is one mana and value for mana in terms of quantity of effect I cannot see this not finding a home and seeing constructed play eventually. I will probably wind up playing it in singleton formats too but I suspect it will under perform at least until Stream makes an impact elsewhere. 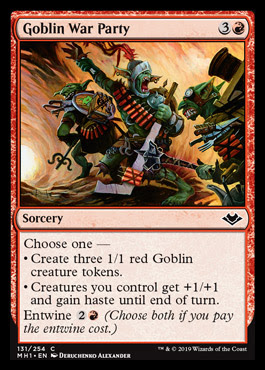 This is an impressive card that can play the role of Hordeling Outburst or a Bushwhacker if you are willing to pay that extra mana for the options. It also scales up to be both in one at the bargain price of seven. That is actually pretty reasonable considering but it is pretty far out of reach for most decks that make goblin tokens! I can see this getting play in place of cards like Krenko, Mob Boss. War Party is more versatile and more reliable and that is what counts most in synergy cards. Krenko absolutely has way more power to offer but I strongly favour options and consistency which is what this is all about. Lots of decks want effects like this so I expect this to see play even if it doesn't have the raw power to last in the drafting cube. 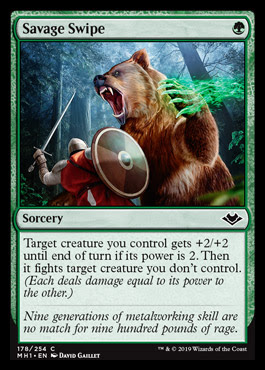 More upgrades to Prey Upon but given how flat seemingly big upgrades to Prey Upon have fallen in cube I don't see this being any differently unplayable. At instant speed we would be talking but this is not any sort of combat trick and that makes it just a bad situational removal spell. Even if all your dorks happen to have two power I still dislike this and would avoid playing it. At best it is a green Searing Blaze, at worst it does nothing and it sits nearer the low end on average than the ceiling. 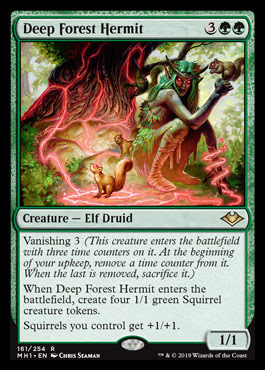 A rework of a classic card. Despite this being a significant power upgrade on Deranged Hermit I am not convinced it is going to be all that impressive in cube. It is a lot of bodies and stats but you can wipe out a lot of those stats with a ping. The lack of utility or single valuable permanent make this a bit lame compared to other army in a can five drops. Siege Gang does so much more overall but he also has a lot more value when he is without his token buddies. Deep Forest Hermit is about as weak as it gets if the squirrels perish. New Hermit will absolutely see play but I think it will mostly just be replacing the infrequent play Deranged Hermit gets. I don't see it taking the place of any other top tier green five drop or empowering a new archetype to house it instead of existing ones. It is the memory of the power of old Hermit relative the the power of creatures of the day which is is making people get excited about this. This is a great card to flicker but it is excessive in that role. Flicker decks get much more out of cheaper cards like Blade Splicer than they do from top end like this. I probably still prefer Thragtusk to this as a big payoff flicker target too. This is a triumph of design. It really feels as if smart people who understand game design and magic sat about and discussed the pros and cons of Force of Will and came up with this masterclass. Someone else made roughly this comment and I entirely agreed with it. I was impressed with Field of Ruin as a solved design but this goes further. The tweaks to this are subtle and they are very well considered for the meta. This card is fair. It does fair things in a fair way and provides a lot of options and interaction. It will lead to better formats. Negate was already one of the best designed counterspells out there and this takes it a few levels higher. Absolutely this is a powerful card but it isn't abusable or broken or anything like that. It is very playable and on theme for what a lot of decks want to do and that all combined with the high power level ensure this will be a staple of many formats and metas for a long long time. So why is this so much better designed than Force of Will? It is not so universally good for one. Like Negate it does nothing against creatures and so your opponent has that potential alternative. It is not a cover all spell like Force of Will and that is important. While you can design good cover all spells you want them to be clunkier. A cover all answer shouldn't also gain you tempo, that makes it too good on too many fronts. The card disadvantage does some work to offset this. That of course being the other hallmark for a very powerful card - when it provides card advantage and tempo such as Bloodbraid Elf. The issue with Force of Will is that it provides so much tempo and control that you could easily recuperate that card disadvantage however you like, or just win before it matters! The transition from Counterspell to Negate effect does more towards making this a fair spell than the card disadvantage does which comes as a bit of a surprise.

Secondly, and more importantly, it is only a free spell in your opponent's turns making it a much more pure reactive control card. If it was free any time it could easily be used to force through combos proactively. That is bad because it is uninteractive and leads to a more polar, more all-in format. The result is the exact opposite. Force of Negation is a fantastic check on the combo decks. It will make them play a slower more interactive game which will result in better and fairer games. Even the exile component is really well considered. Usually such things would be considered a buff to the card but I suspect it was placed on the card so as to give combo a fighting chance in the new modern meta. In combination with Surgical Extraction it is entirely possible a combo deck could lose in their first turn on the play by getting a key component countered and then fully removed from their deck. In cube the exile aspect is still a bonus to the card at least. This also has the nice upside of being only three mana to hard cast making it a less onerous inclusion in a list than Force of Will. It manages to slightly outperform Force of Will in a few ways while removing all the more obnoxious elements of the card. This will be a huge addition to cube and be particularly important to the control on control mirrors. In those the player with Force of Will used to be at such a huge advantage. It will also tone down the brutality of planeswalkers against control. It used to be the case that you would slam your walkers whenever your opponents tapped out as they would survive mass removal effects and be fairly hard to remove. With this extra line of protection it will not be so clear cut all the time. I don't really think we need to spend any time discussing why a free counterspell is a powerful and useful effect, Force of Will has likely taught us that already.

The two for one element is a significant cost and as discussed is a significant part of what ensures the card is in the fair camp. The early mana advantage is worth the card cost for sure but it is not a sustainable line of play. You need to be getting other impressive stuff done to make it count. It will be interesting to see how many copies of the Forces wind up seeing play in vintage and legacy. This kind of effect suffers diminishing returns, you always want the first but subsequent ones really start to bite. I am not even sure this will be a four of in the modern control lists. It might sit better at three copies, enough to keep people honest but not enough to really smart. Being a dud against a deck like humans is awkward for it. Regardless of how it performs in other formats, of which it will see play in all, Force of Negation is a most welcome addition to the cube and will do a lot of good work. Lovely to see a card I can rate at 9/10 that isn't just a design cockup or over powered abusive card that makes the game less good.