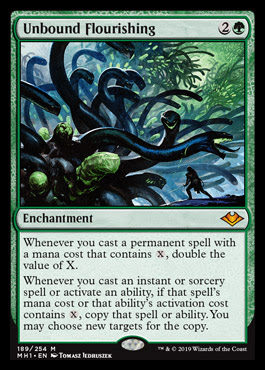 Like a Doubling Season but for X costs rather than counters. Also a lot more affordable than Season but this is fine balance wise as X spells still scale with mana, even if the effect is doubled. Any abuses of this will still be mana intense. There isn't close to enough things in cube with X in them for this to be worth running. As a build around it seems a bit extreme too. I deck full of X spells and ramp sounds pretty awful and even if it is great when you have this that will not be all the time. This is a fun card but I am not convinced it is actually any good. Certainly it will do some good things but unless there is a combo I can't see this making it in any competitive formats. Presently Mana Bloom seems like one of the better uses for it and that is really just more of the same rather than an actual payoff. For abuses this seems significantly worse than Pyromancer's Goggles which are quite a fun gimmick card themselves. Feels like this will be EDH and not a lot more. 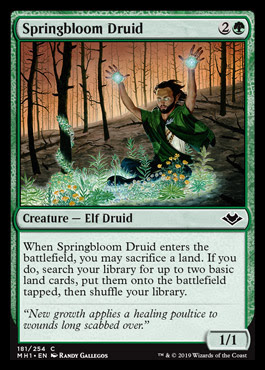 Harrow on 1/1 legs. Much safer in fact as you cannot just Stone Rain yourself by walking into countermagic. Safer but sadly also much worse. The only reasons people play Harrow is that it is instant or that the lands come in untapped (so that it generates mana with a Mana Flare effect in play). Springbloom Druid does neither of these things. This is still mostly better than Farhaven Elf but that isn't the most impressive card to outclass. It is better because it fills up the bin and thins the deck. It is potentially better in that it can fix two colours for you or perhaps it even trigger a Flagstones of Trokair! It is worse because you need more basic lands in your lists to make it viable. With just a couple of basics in the build you will find yourself without enough remaining in the late game and that really hurts. I think this is fine, it will see play but it will be the tiniest of marginal differences from the many other cards that are like this. I still like a Wood Elf more than most of the alternatives including this one. 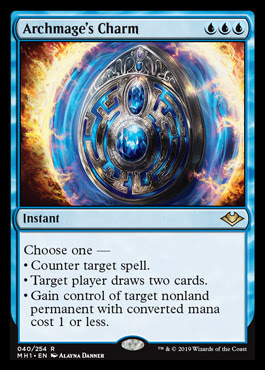 Finally an all blue instant Divination although the triple blue cost is pretty hefty. Esper Charm feels easier to cast! This is no Cryptic Command but it is in that ballpark. It is powerful and versatile and heavy blue. They both can draw or counter things too I guess but that is where the two cards part ways in terms of similarities. Cryptic almost always has a Time Walk feel to it when it is used while this will never really feel like that nor will it be so samey regardless of modes. This cannot do a thing and retain card levels, either this costs a card and does a thing or it does nothing to the board and draws you cards. This is Cancel, Divination or Confiscate meets Isolate! Two supremely broad, different and synergic effects at a reasonable rate and a narrow situational one just to mix things up. That is a great starting point for a modal card, all the best charms have that kind of mix. It is not the mix or really even cost intensity or power levels that let this down relative to Cryptic. The main difference is that this offers three total modes while Cryptic affords six.

The mini Confiscate is arguably the most powerful mode in that it is disruptive removal that progresses your position. It gains tempo and value even it it is only a small amount. I see this stealing a lot of Deathrite Shamans, Swiftspears, Lavamancers, Birds of Paradise and Champions of the Parish! It is not too swingy but it is still swingy enough to make up for the narrowness. I can't see many decks that are able to play consistently not doing so. With Cryptic and Counterspell and such already making people have heavy blue mana bases I think this will slot in no trouble. It is harder to play than both Counterspell and Cryptic and so it will probably see less play than either but it shouldn't be far behind. 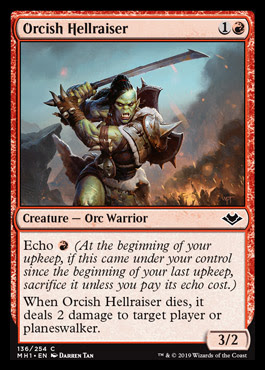 This looks good on paper but I think it is going to perform a lot worse in practice. While the tempo on this is great the overall cost of the card leaves it below par. If this was just three mana it would have no hope really. So how best to consider the echo? Probably as it it was three mana and had haste. It isn't perfect but it is close enough. That makes it most comparable to Brazen Scourge which is just a bit bland and fair for cube. While this is still a bit better than Scourge it isn't by enough to swing it for cube use I don't think. In modern it is a bigger deal as burn decks want to support mana bases that don't go above two mana cards. I think the power level of modern is sufficiently high that this doesn't make it there either. Just a little bit clunky, vanilla and fair. It is a very clean design for a burn card. It is quite a punchy early threat but it can also just be a bad Rift Bolt when drawn late and having no chance of getting through. An updated Keldon Marauders in many ways. Better in most but not enough to be playable is my hunch, despite it being a very close affair. 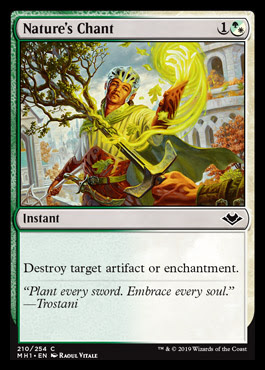 A nice efficient way to include both Disenchant and Naturalize in your cubes. This is a reasonably fair card. A good but slightly too situational removal spell, for unpowered cubes at least. There are more powerful options and safer cards you can run over this so despite the space convenience of this it shouldn't be making the final cut in most cubes. As for sideboard play this has little hope. Being playable isn't a perk there and so more specific but more powerful cards will take it's slots. Despite getting a reasonable rating therefor I don't actually see this getting play in my cube. 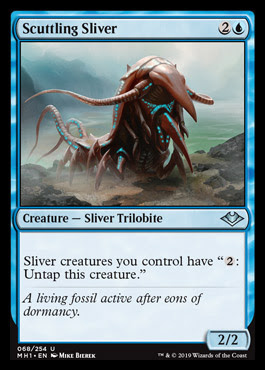 Feels like there is going to be some messy combos with this when they print the Priest of Titania and Gaea's Cradle Slivers... Without abuses however this card is nothing to get excited about. Too slow for 1v1 unless combo abuses. 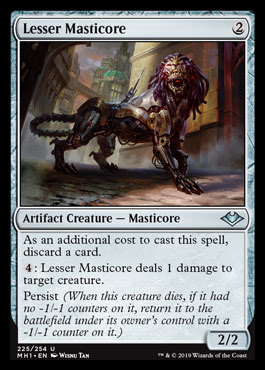 This seems fantastic but also a bit awkward. I like a lot of the elements of this card but still have no idea where I might play it. Bant colour decks will all appreciate the ping and the resilient low end dork. None however will appreciate the two for one cost on playing this nor the high mana intensity required to make it good. Bant is least able to take advantage of discard as well. An aggressive black deck however can easily negative the extra cost of this with things like Bloodghast. There is an element of Walking Ballista to this card as it comes out at two mana and pings for four. Ballista is far better of a card and removal tool but this has more utility and staying power. If you are flush with mana and your opponent needs to win with small creatures they are going to need to kill this twice or find some exile way to deal with it. The persist does a reasonable job of negating the discard cost, as does having things like the Bloodghast. You can however just use things like Aether Vial or Goblin Engineer to bypass it altogether. My best guess is that this will see play as a cheap and easy to cast persist card, discard outlet, mana sink, and colourless removal tool. Sadly just not all that often as it is a bit aimless, fiddly and low powered. If you could hit face with the ping then it would be a win condition in a lot of infinite mana decks but it isn't so... 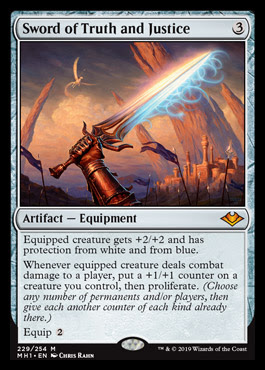 Sword of Truth and Justice 4

One of my least favourite cycles (Swords) meets one of my favourite mechanics! I like the interplay between the two effects on this Sword and I like the scaling potential. In practice however this is a fairly low powered Sword. Broadly speaking the protection values across the colours are similar. Certainly it makes a lot of difference matchup to matchup but overall it is surprisingly close. There are far more green creatures than blue ones but then there are far more blue effects that target creatures and green has ways to deal with artifacts etc. I would actually consider protection from white slightly less valuable than the blue right at this point in time but I think this sort of discussion is more of an article and not an aside in a card review! Top 8 protections now in the works... So with the protection abilities all being fairly close the power difference is down to the triggers which are just not all that exciting. You get no card advantage from it nor does it do much in the way of disruption. Without other creatures you are just growing the Sword wielder which is very all in on one card and begs to get blown out with the right answer. This card is powerful but not enough to compete with the other good swords. Power was never really the issue with Swords either, it is how slow and easily disrupted they are that is the issue and Truth and Justice is exactly as bad as all the others for that. 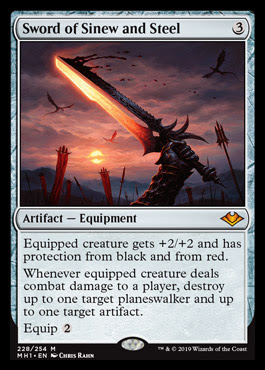 Sword of Sinew and Steel 6

This is a fairly dull Sword but it is probably one of the more effective ones on offer. It doesn't always generate card advantage but when it does it also disrupts and generates tempo. Sinew and Steel has good removal options and more freedom to go face when combating planeswalkers than other Swords. Sinew and Steel can offer some pretty extreme swings in the game, more so than most Swords and more frequently as well. Based on the utility of this card I would probably consider it at least as a half removal spell provided I have some evasive dorks, some resilient ones, and enough overall. That makes this more playable than some of the alternatives. This is probably the 3rd best Sword for cube use after Fire and Ice and Body and Mind. Fire and Ice is less swingy but the value is more reliable. Body and Mind is just too tedious in 40 card lists and no fun, even for a Sword, and so I don't use it despite the power. Given that I think there is room for two Swords in a cube I will give this a go to take that second slot. Feast and Famine proved too inconsistently useful and War and Peace wasn't rounded enough bringing no value component to the table. I wonder if and when we will see the final three Swords in this slow epic release cycle!?