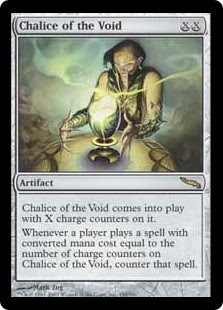 Red prison decks seem like they are a top tier deck in legacy. Typically those are some of the decks that translate into the best and highest tier cube decks. I have not however done a red prison deck before as it is such a targetted deck. It is like a pre-sideboarded list for the meta. It leans super hard on cards like Blood Moon and Chalice of the Void. While these cards can be good in cube it very much depends on what you are facing. The cube meta is broader and has much higher variance and both of these things increase the time your Chalice and Moon are mediocre or even duds at the expense of the times they are game breaking. I figured with a bit of card quality, a considered smattering of hate cards and a weightier threat element that a red prison deck would be decent in cube and so I got to some building and playing. Here is my list; 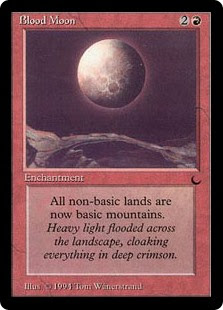 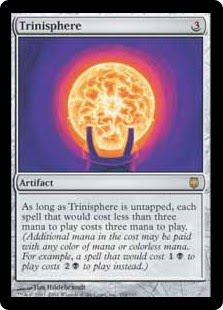 Chandra, Toch of Defiance
Koth, of the Hammer
Hazoret the Fervent
Fiery Confluence 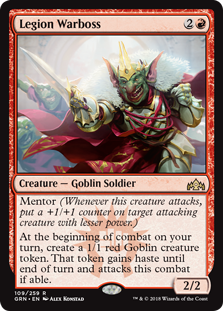 The deck performed very well but it was less of a prison deck and more of a burst deck. What made it good was the ability it had to deploy cards that get out of hand with time far before they should. Turn one token producers are not uncommon and will beat most things without an immediate answer. Planeswalkers and other top end are all quite naughty too when made several turns ahead of schedule. Doubly so when Chandra and Koth both produce mana and as such can continue the burst. I made what looked like a slow start with Mountain go, Mountain Ruby Medallion go, only to follow it on turn three with Koth minus into Chandra and plus her into a Rabblemaster. Eleven mana's worth of threats that are diverse and hard to clear on turn three with just one ramp card! 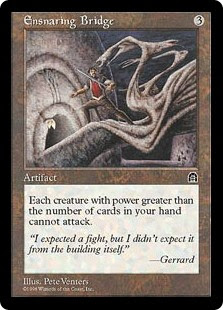 One of the things that irked me about the list is the counter synergy it has built in. My own hate cards hit me, I turn off some spells pretty much whatever I place my Chalice on. Trinisphere turns of all the rituals and is a little bit annoying on top of that. Ensnaring Bridge can stop me winning with about half of the threats! To be fair, in the matchups you need the Bridge for you wouldn't be winning with those threats even if they could attack. I tried to include ways of getting rid of annoying artifacts, mostly the Bridge, and wound up with Fiery Confluence and Pia and Kiran Nalaar. I had Abrade, Pia Nalar, Shrapnel Blast, Daretti, Scrap Savant, Goblin Cratermaker, Telim'Tor's Edict, Makeshift Munitions, Greater Gargadon and I feel like even a few more were all pulled out and put on the short list. Lots of good options on playable tools for the job even if it is a little overkill! I should probably have played Siege-Gang Commander instead of the Glorybringer as well for the winning through Bridge ability even if it mildly reduces the power of Sarkhan! You would probably uptick the power of the three mana goblin producers a little with Gang anyway. Little tweaks to these sorts of things are all you can really do to improve an established archetype like this. 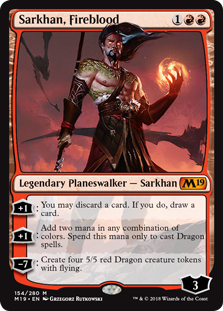 Regardless of the self harm your hate cards do it is still all under your control and all stacked as much as possible in your advantage. You use your rituals to burst out a good card and then follow it with the Trinisphere etc. You have a smattering of looting effects to allow you to gain some value back from hate cards that are obviously going to be blanks. More looting wouldn't go amiss. Faithless sadly is just going to be hit by the Chalice too often. Cathartic Reunion needs two cards in hand to work and can be a dud draw or a liability with Bridge. Daretti again offers some potential assistance as does Dismissive Pyromancer. Wild Guess is also always an option and probably one of the best not already in use. The less you know what you are facing the more you want to use a spread of the more polar and potent hate cards which in turn benefits more looting effects.

The deck is pretty simple to play in general but does get very complicated when you have great information or little information. When you can make reasonable assumptions it is like goldfishing but at the extreme ends of information I was finding it much harder to know the right lines. A good number of my wins were non events, I would just make something powerful on the first or second turn and ride that to victory, or at least the momentum gain from it. That made for a slower than usual learning process.

In longer games the list actually played quite like an 8-Rack list. I couldn't do much because I didn't have much, the nature of all the fast mana means you run of gas quickly and have a lot of dead draws. My opponents couldn't do much because of the hate and so there were some very slow paced games as well to offset the rapidly ended ones. This makes it super hard to play against. Your opponent may have Swords to Plowshares in hand which is the perfect response to you making a Hazoret but it is a complete dud if the opener is Chalice for 1 instead. It is a little polar in that regard but that was to be expected. Not only are your plays potentially very swingy, so are the answers or lack there of. 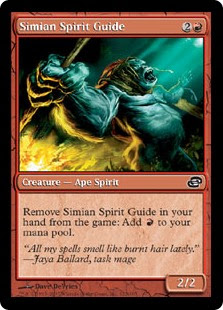 I looked at a wide array of other hate cards, mostly artifact prison and denial cards but some sweepers like Sweltering Suns too. Hopefully the go wide decks are hurt in deploying things with your Trinisphere and Chalice or held off by your Bridge and premium quick threats. I certainly didn't find myself getting overrun. Some other hate I looked at includes Sorcerer's Spyglass, Sphere of Resistance, Torper Orb, Blood Sun, Winter Orb and further to that a Crucible of Worlds package including cards like Field of Ruin and Wastelands. Losing mountains makes Koth weaker but we can live with that. It was however for that reason (that I wanted to play a really powered up Koth) that I again elected not to go down an artifact synergy route using the artifact lands, Inventor's Fair and then some payoff cards like Mox Opal, Karn Scion of Urza and Daretti Scrap Savant. The benefit of the artifact package is you get some increased capacity to search for and recur your key hate cards. Another Mox is always huge too but it likely requires rather more support than I have mentioned. Rituals probably need to become mana rocks and that sort of thing which changes the deck quite significantly. 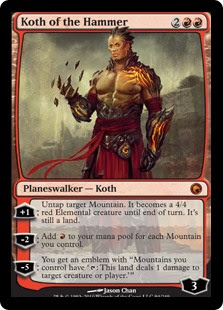 While a lot of the disruption is mana denial based the stuff I chose not to play are the things that are more effective in a longer game like Winter Orb and Sphere or Resistance. By contrast Trinisphere and Chalice have a much more pronounced effect on the early game and lose value as it progresses. These work better with the punchy threat like Warboss you are employing. This list is all about exploiting the first couple of turns of a game in some way and then being too far ahead after that point to lose. That aspect of the deck heavily dictates the kinds of threat and hate you want to pack.

I liked the top end a lot and felt that the ratios of spells in the deck was fairly on point as well. I might have wanted more ramp, threats, answers, and looting but not at the expense of other cards. I looked at Runaway Steamkin who is decent if played early but very underwhelming later in the game. I also looked at the new Skarrgan Hellkite for synergy with Sarkhan, ability to win through Bridge and all round decent utility. With enough five drops in the list Seething Song starts to look good but by the same token keeping the number of five drops to a minimum makes your consistency look good! The classic high power red cards like Faithless Looting,Lightning Bolt, and Wheel of Fortune were all looked at. The one drops were ruled out because of the terrible synergies with our own hate cards. Wheel just felt like it was a luxury that would take the spot of a threat card that could provide value like another planeswalker. This deck is so eager to burst I also looked at Elvish Spirit Guide which is fine but iffy. You probably need to turn Mind Stone into a red producing rock and perhaps even need to toss in a Manamorphose as well to smooth things over. The deck is pretty tight and fairly well mapped out. My gut for making space would be in the hate group of things but then I am overly wary of playing cards that depend on what my opponents are up to in order to perform well. I could certainly see cutting Magus of the Moon for a threat or a looter of some kind. Overall I was happy with the deck. It performed very well and seemed high tier and suitable for several different cube formats. It was less dull than expected and gave surprisingly good and different games. It is always nice playing a deck that is established in another format, powerful in that format and that translates across to cube well. They feel much better tuned and refined than other early and new brews which more typically get pounded on their test flights.