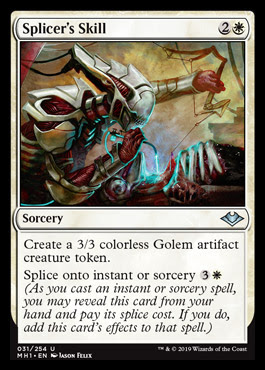 A fascinating card with a nicely relevant take on the old splice mechanic. This isn't good baseline making a 3/3 token for three and at sorcery speed. While weak it is still fine, it is better than doing nothing and is both proactive and defensive as required. Splicer's Skill is also not at all cheap when it comes to using it for value. The cost goes up to 4 mana and you have to be paying for your other cards as well. That means you need to be at five mana before this springs into action (short of Gitaxian Probe) at which point it is not packing enough punch for that stage of the game. It is not until you have spare mana in the late game that this really gets exciting and by then you should be out of spells to splice onto. I like this a lot and wish it was a little more playable. I like how it is instant if you splice it onto instants. Sadly it just seems like it is win more in the late game and very low powered before then. Nice at least that it is value in white I guess. Unblockable one drop that is any tribe you like is going to see some play. It might just be with Yuriko but I suspect it will find some other cute places to hang out. Low powered card but a good supporting potential for a wide array of things. 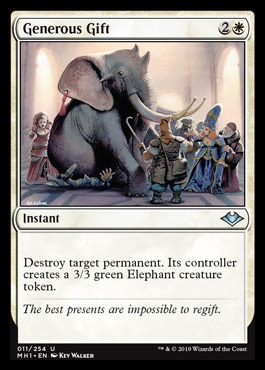 Much as I love a colour shifted card this is pretty unexciting even if it is thematically appropriate for the new colour. And apparently more card style word play. White is all very Afterlife and Cradle Snatch after all! The problem is, white is not hard done for removal cards for any kind of permanent and so this is just a bad card in white. At two mana we might be interested but at three this is just a bad Oblivion Ring, Vindicate, Councils Judgement, Oblation, etc. It has hitting lands and being instant going for it and you might want to support something like Oath of Druids so this will see some fringe use but only in quite specific cases. For general use this is garbage and outclassed by much. 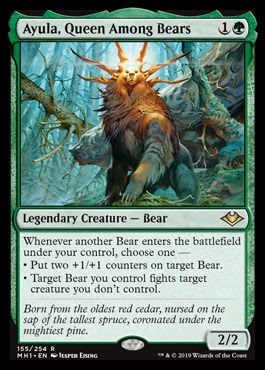 Well, this is one of the most impressive lord style cards I have ever seen. The issue this card has is that there are very few bear cards and no other bears matter cards. You are not playing a deck full of literal Grisly Bears just so that this card is a bomb. I would presently struggle to build a 40 card bear deck in singleton. It would likely have more changelings in it than actual bears... At least we have Ayula's Influence which is a good bear producer. While the best thing I can see to do with Ayula presently it is still entirely just a win more combo. I can't see this doing much anywhere but absolutely one to keep an eye one. We will not need much more bears and bears matter cards for this to be playable and when it is it will be all sorts of good. 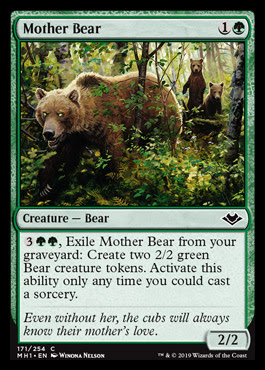 Probably the best proper bear bear! Three in one bears with a good split and spread of costs. While not as powerful by any means this does remind me of Growth Chamber Guardian. Both early plays with some value later on. Like updated (and thus playable) Call of the Herd cards. This has some nice self mill and discard synergies as well. A nicely rounded card that is really just a bit fair for what you want to do in cube. It is so very much in the middle of a tempo card and a value card that is actually winds up not being too exciting for either role. 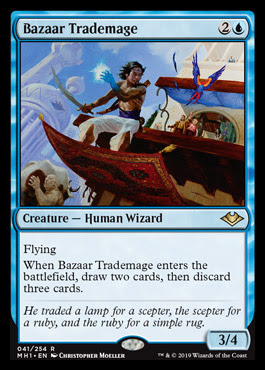 A super interesting enabler that even just has potential as a beater. A three mana 3/4 flier is a really solid thing in blue and consistently performs in blue aggro and midrange lists. It is even good by the standards of dorks in other colours. Paying a life a turn is a much lower cost than losing a card right away but Trademage isn't just discarding you a card. Even with no synergy at all it is a big pile of premium card quality in addition to that loss of card advantage. And no decks have no synergy with such things any more. Everyone has flashback and delve and delirium and so forth on the go. This is going to empower some things for you, perhaps minor, perhaps major. It is going to also provide card quality and be a huge dork in play. I think it is probably a bit too hard to reach the top ends of performance on the discard in a draft setting and in a general setting the risk of this card will be too great compared to what it offers. This is the true Careful Study on legs as it actually has card disadvantage unlike Champion of Wits. It is a good deal at that being a Study and then a 3/4 flier for the remaining two mana. Still, you have to really want Careful Study to play it and most of the decks want it for quicker things or at least not things that mesh brilliantly with meaty mid level dorks. This will see a bunch of play but in synergy builds rather that limited decks. 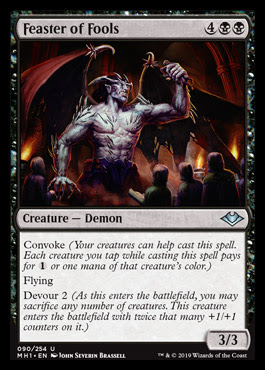 A really elegant combination of keywords. Tap them all then eat them all! Have six dorks in play including two black and one Blood Artist. Cast this for free, sac everything, deal six and have a 15/15 in play. Have a way to give haste and win with a lot of damage! This does some cool things but the payoff of a single fat flier is a bit dull and hard to use. It needs that haste giver to give it the punch you want which isn't making it all that good of a finisher. It is probably a little to slow and clunky for general use too. High powered and close to the mark. Certainly very capable of winning a lot of games. Just a bit cold to spot removal nor a big fan of bounce. 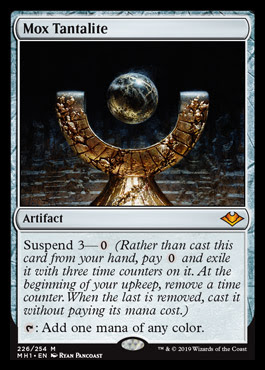 This is pretty huge. It is not as abusive as Lotus Bloom but I feel like it is way more playable. Considering how good Search for Tomorrow is I expect this to get a lot of love in cube. Basically you pay one less to suspend and have to wait one turn longer on the arrival. You don't pull lands out of the deck but you get a better fixer, don't have to include basics and you get artifact synergies. This ramps to five rather than to four which makes it a less less appealing for aggro decks but control and midrange will be all over this. Especially non-green lists. It is a ramp card that costs nothing in mana and is a clean 1 for 1. It is just going to be like a really good land in a lot of places. Waiting three turns for your land is certainly not nothing, it is a big deal and a long wait and as such is only something the slower decks will be up for. That and the decks that can abuse this based on the suspend cost such as As Foretold or the new Goblin Welder. Kind of feels like this should have been a legendary. Some combo decks and many slower decks will look to play this in cube and in modern I expect as well. I think it is nice and fair but I wish it had been a legendary if just as a mild attempt to keep the price on it a little calmer. 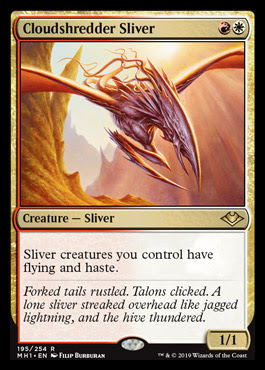 About as good as it gets for a sliver deck, this is two of the best keywords you can have and it is pleasantly cheap as well. 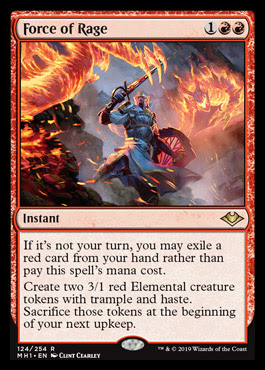 Another card very alike to Ball Lightning. Broadly this seems better in a number of ways. The only drawbacks I can think of are type based and the way red aggro is presently it has a big preference for instants and sorceries over creatures. So this is mostly making a pair of 3/1 one shot dorks. It is all of a Hellspark Elemental in one go and at a mana less. Compared to Ball Lightning it is easier to (hard) cast. Has an extra body and an extra toughness allowing it to push damage through more effectively and reliably and even split it if desired. It is also two bodies which benefits all the many scaling cards like Purphoros and sac outles like Goblin Bombardment. These are only the aggressive perks too. On defense this can be a pair of zero mana Bolts on dorks. You can block two things or a big thing and do some surprise trading. The red decks you would play this in are not all about the blocking but it is certainly a powerful ability to have tagged on and it will come up often enough in cube. Racing a red deck is going to be harder than ever.