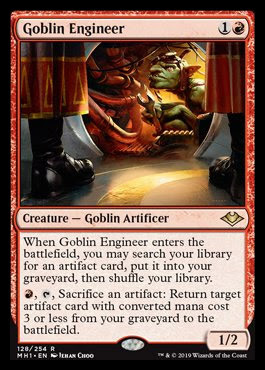 Apparently this set is chock full of fixed reworks to old cards. This new Welder is more of a departure from the original than most of the reworks which mostly just goes to show how oppressively good Goblin Welder is! To make up for the many significant de-powering fixes to the card we are rewarded with a couple of perks, one of which is a whole new piece of supporting functionality. Two toughness is the other which is nice. It makes you a lot happier about paying two mana for your utility dork. Preventing big recursions is the main thing done to curtail the power of this dork. I wish they had done up to four mana and not just three so that I could still enjoy the classic value plays of moving about Solemn Simulacrum. The extra mana cost to activate added seems minor but will add up quickly and just keeps the card from being ongoing free value and utility. It makes it a choice to use and that is interesting. So how good is Entomb for an artifact? Certainly very very good one the back of a Welder like card and probably very good regardless. Goblin Engineer can be used for many more things now. It is a tutor for Lion's Eye Diamond in a Salvagers combo for example. It can setup a Reanimate combo like Entomb conventionally does as well. There are a bunch of recursive artifacts as well such as Scrapheap Scrounger. Mostly I expect Engineer to find cards like Ichor Wellspring and just move them about the place for ongoing value but having all this utility is great. It removes the need to pair the card directly with a lot of discard support. This is a cheap and powerful card with multiple uses ranging from combo to value generation. It is perhaps lacking sufficient support to shine in my cube but what with cards like Urza strongly pulling me towards adding in a lot more support there is a chance this slips in and stays. Even if it is not good enough for a limited meta it will make a lot of waves in the more constructed formats. It has a number of parallels to Stoneforge Mystic as well as to Welder so some really big names inspiring this gem. 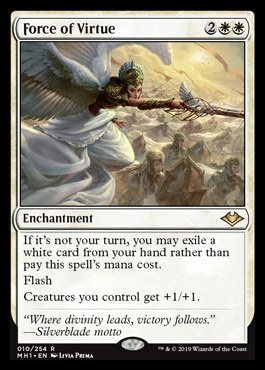 Well this is pretty massive for white weenie decks. I come pretty close to preferring this to Dictate of Heliod without even considering the pitch cost! Simply being four mana instead of five lets you play this out a lot sooner than the dictate. The sooner such cards hit play the more relevant they are. The game is often already won or lost by the time you get to five mana while four is still a critical point. Obviously things get pretty silly when we look at what we can do with this free Anthem and not just a flash four mana one. Just being able to curve out with this and have it relevant for every attack is disgusting. A handful of one drops will be enough pressure to end a lot of games with this supporting them. You also have the option to really mess up certain kinds of mass and spot removal or combat maths. Normally if an opponent is tapped out you can make some fairly good predictions about their next attack. Force of Virtue will be able to piss all over well laid plans and kill carefully positions planeswalkers with ease or simply crush an attempt to race. It can be used as a pretty nasty defensive combat trick at no mana cost or a less high tempo aggressive combat trick without access to the pitch cost. White is not ecstatic about card disadvantage being the weakest colour for its ability to regain it but this offers so much tempo in such a desirable package that I can't see that being a problem for the card. Pretty sure this is the best Anthem ever printed. Nice for white to get an interesting card too. 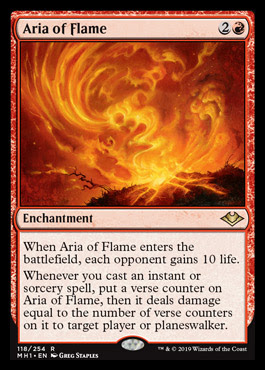 Imminent Doom meets Pyromancer's Ascension. While the Aria solves most of the issues these other cards have (for singleton at least!) the concession of 10 life rather balances things. So how does this pan out? For three mana you get to empower future spells. The first four instants and sorceries you cast just make back the life you gave your opponent but it isn't a blank in that time. You do get to threaten planeswalkers with it which is fairly significant in cube. There are parallels between this and Thing in the Ice. Both do their main powerful thing once you have played some number of specific cards while doing a little before then. Thing does a bit of defensive blocking prior to that and Aria does some aggressive anti planeswalker posturing instead. Assuming this only hits players for the first four spells you play then your fifth nets you a Lava Axe which is decent at three mana and a card but poor given the delay and extra work required. Really you need this to get you to six spells before it is killed of the game ends and have it do 11 damage, which for three mana and one card, is well worth the wait. There are some big risks with doing this though. Flicker effects, bounce and removal are all pretty ruinous. There is also the risk of this arriving late when you have no gas to power it with. Indeed, this latter issue is so big I think you can only run this in an Izzet deck with a lot of draw and cantrips. A red deck with just burn risks too much with this. You can try and pair it with a lifegain prevention effect which certainly makes it a lot more impressive but it also makes it really clunky and wishful. If you are waiting till five mana to also Skullcrack or playing it after another 3 mana card with zero board presence like Sulphuric Vortex then you are probably just losing the race to any old creatures. This card seems narrow and risky and a bit unnecessary. Certainly you can build around it and have it be pretty good but I think you can do the same for plenty of cards and have better returns on doing so. I feel like there is a black card you can use that means the lifegain will instead deal 10 to all opponents. That obviously makes this filthy but I fear it is super expensive and means it is only going to be a thing in EDH. 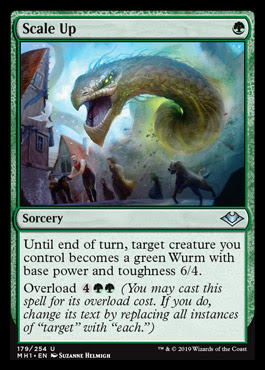 This stumps me a bit. It seems pretty abusive, not just for the massive stats increase but also the fact that you can scale it with whatever the dork in question has going on. Scale up a doublestrike dork, a lifelinker, one that draws cards equal to damage dealt, that sort of thing. Infect is obviously one of the scarier things to do with this in a modern setting. It looks like a nasty little combo card or just a high risk potential blowout card. Quite possibly one of the first cards I am wary about the design of. It is worth noting that if you are playing it on a 1/1 dork you are only getting +5 damage, which is obviously massive, but it just isn't quite as far above the curve as it first appears. Even so, it is more pump than you can get elsewhere on a one mana card with the variable exception of Berserk. What makes it unusually objectionable is that it has the overload mode which makes it kind of like a split card. A split card that is a pump spell or an Overrun effect is quite impressive. Luckily it is sorcery meaning it cannot be used in any way like a combat trick. Even so, this dual utility combined with very high power makes this card much more likely to see play. Dangerous, cheap, all in cards, that are polar are not the sort of thing I want to overly encourage to see play. I think this is still too narrow to last in my drafting cube. There are not quite enough cards with huge payoff for this at one mana and Overrun is still probably just better at being Overrun, not to mention all the actually better versions like Garruk and Craterhoof. So yeah, this has some potential in synergy decks, likely in the place of Might of Old Krosa but probably doesn't do anything more. Still, scary card. 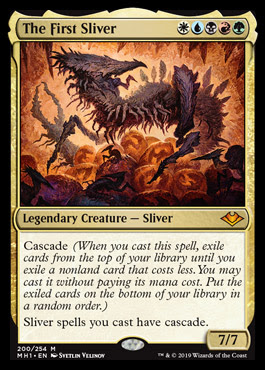 None of these are playable outside of tribal but most have application in tribal lists. For EDH these are much more exciting but I still imagine most of these will see some consideration and attention in 40 card lists. The First Sliver really does allow for a cascade! I think it is a bit win more for cube but it will be exceptional for EDH. 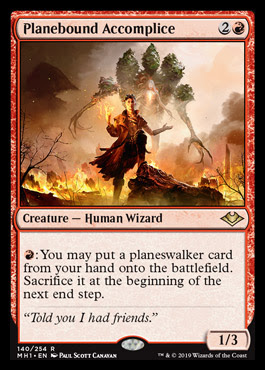 While there is not really a scale in terms of something being unique or not this still feels like it is more unique than most other magic cards. Not much else does much like this. This is a cheap Sneak Attack for planeswalkers on legs. Cheap is good, legs are a mixed blessing, and planeswalkers is the really unique part. Certainly it is a lot less powerful than the creature supertype but that it is also very different. You get a lot more utility in general from walkers as a whole but also from each card as well. There is quite a large range in potency of the walkers when yo1u get a single use from them and while cost is a factor it is not quite so clear cut as it is with creatures. It has more to do with how powerful and potent of a loyalty dump the walkers can do in one activation. That and the cheeky synergies of original Venser and Kaya both able to protect themselves from the sacrifice. You can try and be really naughty with cards like Oath of Teferi and Doubling Season and try to do really busted things on the cheap but I don't really think you need to, or at least, that isn't what the focus should be. This might be good in a a Doubling Season deck but you don't build around this with Doubling Season. I think probably it is just fine using this as a way to cram in loads of juicy planeswalkers to a deck without making it too clunky. When you can just use your Jace as a Brainstorm or your Ugin as a Lightning Bolt at the going rate for such things then that is fine. In many ways it is an upgrade! Sure, Ugin is more powerful than a Bolt and you lower the power of your deck's total by doing that but presumably you designed with that in mind (and has more planeswalkers than normal with a higher total power level) and while Ugin is more powerful than Bolt it certainly isn't when you take mana cost into account. Most good planeswalkers feel like they offer decent value on at least one ability when that ability costs you a single red mana and the loss of that walker from your hand. Sadly I fear this is a little too narrow for the cube with a little too low of a stand alone power to help carry it. There are not enough walkers played and a three mana 1/3 is abysmal. This is a nice utility card more than it is a combo build around and so it is seemingly unlikely to see that much love anywhere in cube despite having so much potential and intrigue on the go.