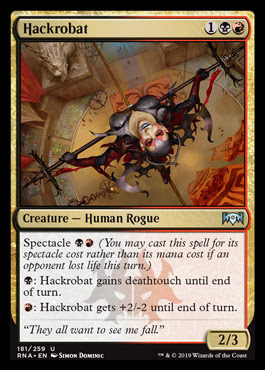 Yet more cards seemingly done for the pun. While this is a fairly versatile card with a fairly high power level it is still a long way off cube playable. You don't want cheap generic dorks filling up your precious gold slots unless they are truly phenomenal. Cheap gold cards want to be versatile high power removal and disruption. Gold dorks want to be game winning threats that pull you into those colours. Hackrobat is just a card you are happy to play in a Rakdos aggro deck. It is pretty lame when you have to pay 3 for it and it isn't even the best Rackdos two drop dork when you play it for spectacle costs. This isn't powerful enough or something you can scale and so it isn't seeing any cube constructed in addition to being unsuitable for the drafting cube. 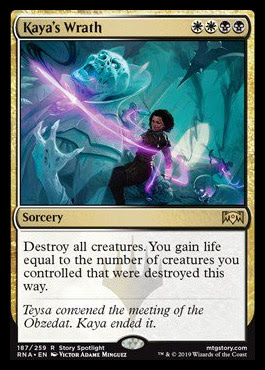 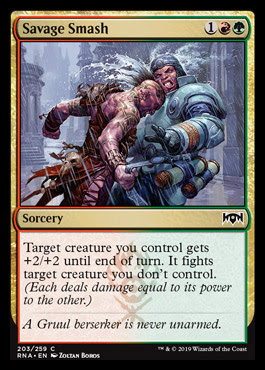 This is the fifth ever clean Wrath of God they have printed at four mana. By clean I simply mean it has no drawback like lands not uptapping or life cost nor does it have any selection on dorks, it just destroys them all which is really what you want from these kinds of cards. Sadly it is also the worst of the clean four mana Wraths by a long way. You have to pay BB instead of 2 on your Day of Judgement just for some meagre life based compensation for any self inflicted damage you cause with it. That is a fairly prohibitive cost for not much return. Fumigate is much more accommodating and has better life returns. I suspect Fumigate would be a superior drafting cube choice for mass removal. Kaya's Wrath is monumentally gold. At 2BW it would be one of the best of the five Wraths. At 1WWB or 1BBW it would be at least in the same sort of ball park as the others. The BBWW cost just makes it so hard to play. It is typically blue decks that want mass removal effects the most. While Esper is not uncommon you will almost always find one of black or white to be very much a splash colour. Having any sort of sensible looking Esper deck that can play this is going to need the best possible mana base or it is going to have to splash the blue. Orzhov decks certainly don't go wanting for Wrath effects and while the cube would love more it has no real use for this offering entirely based on the onerous cost. It is just obnoxiously narrow. I can't even see it getting used that much in constructed cube decks. It is a very strong card that isn't quite strong enough for the few places it can do its thing. 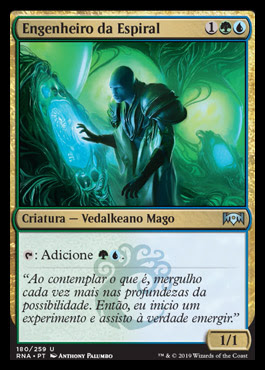 This is the wrong way to go for a fight card when compared to Titanic Brawl. The pump effect makes it narrower to take full advantage of and the higher cost reduces the utility and increases the blowout potential. Savage Smash is quite a blowout card all round. It should either win you the game or lose it for you in limited. In cube it is a complete non event.

As yet no three mana dorks that tap for two have ever worked out in cube (with the debatable exception of Joraga Treespeaker). The issue is risk for the most part, these cards are simply too devastating to eat a removal spell with. Often they are flimsy like this one and so cards like Arc Trail can mop up and basically end the game on the spot. The best 3 for 2 ramp cards are non-creatures like Worn Powerstone and Overgrowth and they only see play when they have additional synergies they support. 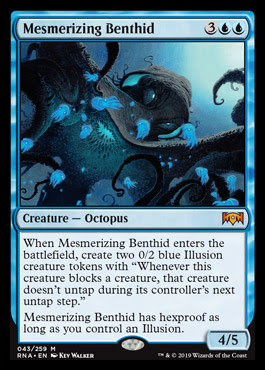 This looks like a house. It is the blue Siege-Gang Commander! The only real comparison those cards have is being five drops dorks that also come with tokens but as a general rule those kinds of cards perform well in cube. They afford a lot of board control and presence and that is all round high value. A big part of why this seems so impressive is that it is in blue, a colour typically poor at board control. It is also of a more defensive lean than most other Cloudgoat Ranger style cards. This is a lot of card and it feels like even more card than it is because it is blue and because other blue dudes with presence are fairly arse. Whirler Rogue has been one of the best all round blue dorks in cube for a while now and it is purely because of the decent stats and broad coverage it has. Blue had nothing else playable like it and leaned on it pretty hard. Now it also has this. Benthid is 4/9 of stats across three bodies. The main bulk of that has hexproof for what could be a very long time. Blue even has a few playable illusions that can help extend the hexproof span on Benthid. A 4/5 hexproof can block most stuff safely and also effectively. It can attack fairly well too. Double blocks against blue are not often needed as their dorks are all pathetic but when they do need to happen they are pretty dicey with blue having so much trickery and instant speed bounce. The pair of 0/2 illusions own up 1 power ground beaters fairly well and can really slow the damage of more significant threats. Between them you can hold up something for four turns, two of which it will be fully locked down and unable to take advantage of trample or provide raid etc. Benthid is hard to deal with, hard to race and hard to attack through. It does a good job of protecting yourself and planeswalkers and it does a great job of dominating the board. It doesn't help you out in the air at all but that is not a weakness blue really suffers from. If you are going to tap out as a blue player this is exactly the kind of card you want to do it with. It feels like mostly what it does is either stabilize or win and that makes it sounds exceptional. I see both control and midrange playing this. I can even imagine blue aggro decks topping out their curve with it. 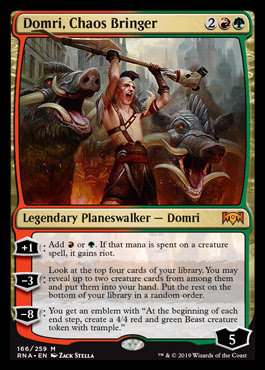 Great +1 and great starting loyalty but rather more questionable -3 ability making me wonder how good this will be. On the turn you make Domri you are unlikely to be able to usefully use the +1 and the -3 will make Domri fairly vulnerable. As a curve play I am not stunned by what Domri can offer. Once he is in play and you are untapped he gets more interesting but only a bit. You have to be great to make up for doing nothing bar growing one in loyalty on the turn you come down. If you find gas with him on your untapped turn you can't play and buff it. It is really going to be hard to sync up Domri's effects with the flow of the game. The -3 is dubious generally because of creature density in decks. I consider 40% to be a creature dense deck, very few reach 50%. As such Domri will only get one hit a bunch of the time and will barely ever get a choice with most double hits being two creatures out of four and not three or more. You reveal information and you are pretty limited in range. You can even fully miss. All told the value of this -3 feels pretty close to draw a card, a whole lot worse than the draw 2 it tries to palm itself of as. It has the feel of a -2 at best. Gruul has a lot of cards that give haste, Xenagos, Sarkhan, Arlin Kord, Fire of Yavimaya! Domri, Chaos Bringer is better than most, if not all of these but not by a lot. None of them see much cube play and none of them remain in my drafting cube. Does that mean we are playing Domri as a value tool? Perhaps although I prefer little Domri, the four mana Chandras, and it turns out, when we get down to it, most of the options out there that already see cube attention. If you want really value and haste then Domri is your man but for just one of those roles I think you can do rather better. I struggle to imagine what deck really wants this Domri and how he is superior to all the alternatives in this hypothetical deck. His ultimate is fairly tame as well but shouldn't matter too much. If you can't win with the other two modes you have build wrong (or it is so late game your deck is dry!). 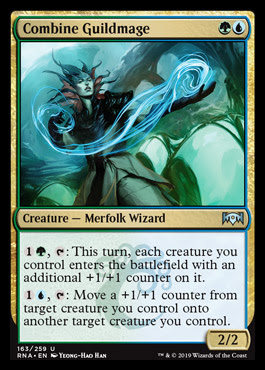 Seems worse than other Simic Guildmages. The only reason I am even paying attention to this is the merfolk tag and even then it seems incredibly hopeful for this to get a slot over the many good two drop fish on offer. It would have to be a +1/+1 counter themed merfolk deck which just seems a long way off and a sub-par plan fundamentally. 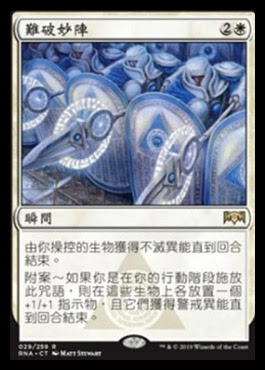 This seems very potent. It is a modal card in disguise. Either you are countering most removal spell or effects, be they mass or spot, or you are getting a team buff and a free hit! Your whole team getting indestructible is worth two mana or so but it is narrow and so having a modal version of it makes it worth more. Putting a +1/+1 counter on all your dorks is also worth about two mana but again the slightly more conditional nature of that makes a modal card with it worth more. See Collected Effort. While both of these modes require you to have a creature they function very differently. One is proactive and a finisher. The other is reactive and protective. One catapults your lead to a win while the other stops your lead being removed. You are only playing this in a deck with many dorks which in turn mitigates the situational aspects of needing creatures for this to do much. Gaining vigilance and indestructible on the turn you give out the +1/+1 counters is a lovely little touch that allows you to just hit for free with basically no consequences. It means that when you use this in proactive addendum mode you should be able to push ahead and grow your team at the same time. Perhaps further push ahead with convoke cards. Overall this seems like a versatile tool that many aggressive and go-wide white decks will look to. Sadly it is still a non-threat card for quite a small range of archetypes so even if this is great at its job it might not last in the cube. This seems strong but does also need to meet expectation.