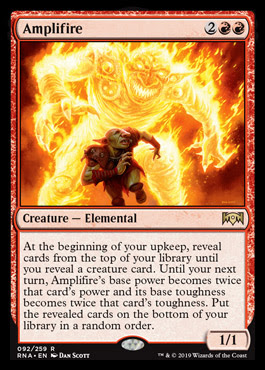 Comedy meme card. Like sure, you can put a couple of 15/15 dudes in your deck and no other creatures. You can find Amplifier, cast it, protect it for a turn and then give it evasion or Fling it about. That will win the games you pull it off in but that is much harder and more easily disrupted than some pretty bad combos. This has about as low a floor as you can go and is a lot of work to approach the mediocre ceiling. It feels like this card was designed specifically to get the pun in.


Seraph of the Scales 3 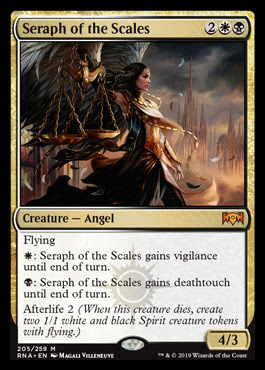 Certainly a card with a lot of power but I don't see it getting much cube love at all. It is in competition with some serious power in both black and white. It might have a shot as a mono card but in gold it isn't getting enough play to last in the drafting cube. A 4/3 flier for 4 is below par, even a 4/4 is pretty mediocre and that change from 3 to 4 is huge on a 4 drop. As a mere 3 health dork Seraph is vulnerable to removal and even combat. Her abilities don't help her much either in that regard. She kills most things she tangles with in cube so deathtouch isn't coming up that often. Vigilance also just scales fairly poorly with a 4/3 flier. It doesn't block much well and is pretty risky to do so with. If she got lifelink for B and first strike for W then this would be a much more interesting and powerful card. The best thing about Seraph is the afterlife. A pair of flying 1/1s is good and it makes Seraph a little less appealing to kill. It is not so good that you want your 4/3 flier to die. Three is steep for a pair of 1/1 fliers so four really isn't cutting it. That all being said, overall total of 6/5 flying stats for 4 mana sounds really strong. Especially when it is over 3 bodies and has protection against mass removal. I will test this but I can't see it outclassing the premium white or black 4 drops which will limit the play this gets savagely. It will see play almost exclusively for novelty and experience reasons. It isn't even something you can use that effectively in the a themed deck. 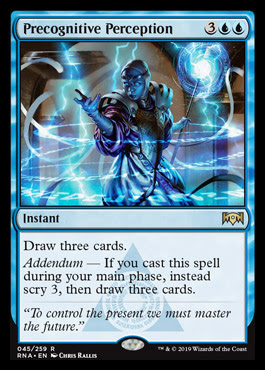 This is a big healthy draw spell. It gives some options and it is fairly safe and contained. It isn't exactly powerful but it is direct and might see the odd bit of play here and there. Blue has pretty silly numbers of blue draw spells at 4 or more mana now and so despite this being near the top of the pile it isn't really high enough to have any decks that specifically want it. It will get some curiosity play and be fine but unexciting. It has almost no chance of being an optimal card in a good deck, just a generic OK card in the odd deck. 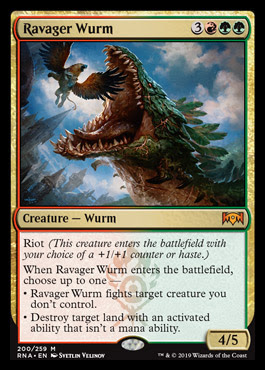 This is powerful and versatile. It has four modes itself and potentially many more options based on the available targets it has open. Generously this is a Glorybringer style card. Sadly without trample the body is rather less exciting. As a six mana gold card it therefore isn't enough above the curve to get much of a look in. For one more mana you can have Dragonlord Atarka who is quite significantly more punch! For the same mana you can have an Inferno Titan or Carnage Tyrant. Versatility is nice but on your big cards you want power, directness and general all round suitability. Ravager Wurm is a bit clunky to appeal all that much to me. 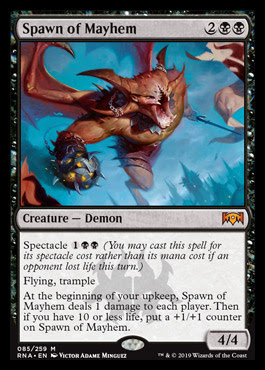 Well now this seems very dangerous indeed. This is a solid high power threat that can be very cost effective. At worst it is a 4/4 flying trample for 4 that offers a four turn clock rather than a five turn clock. I guess at worst you die from the damage it deals you but that is a pretty minor detriment to the card. Indeed, most of the time the self harm will help you empower the Spawn of Mayhem. If you at between 4 and 11 life when play Spawn it has an impressive three turn clock. This is all fairly reasonable sounding for a four drop. When you have the ability to bust this out for three mana the card shoots through the roof in value. Master of the Feast has won a bunch of games and Spawn is far far less dangerous and rather more punchy too. I peg this card in a similar group to Abyssal Persecutor but I also rate it more highly. Just a big fat under cost flier. I think I might like it a comparable amount to Sublime Archangel. Spawn fails the Jace test a bit worse but I think it is robust and threatening enough to not much care about that. The variable cost is a big deal there too. Four drops that die without any effect or value to spot removal normally need to be nuts to make the cube but three drops can have that problem and still be cube worthy even if they are just good. Being black and having a starting toughness of 4 also makes it a little more robust than Sublime. 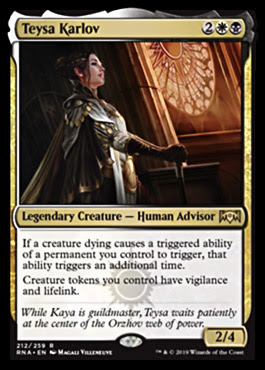 Very powerful in the right place and pretty poo otherwise. This is a Pillarfield Ox if you don't build around it. You need on death triggers and tokens to start scaling up Teysa. The token element is fairly mild. Most tokens are small and get little from vigilance or lifelink. It is a nice perk but it has to be a free extra to be nice, it isn't something you would play Teysa for, even in a token deck. What you need are premium on death triggers, the main and obvious one that springs to mind is Blood Artist and the like. Doubling up the effect on one of those is pretty brutal. Doubling up on afterlife and effects like it also stands to scale very well in that kind of deck. Teysa will be a bomb in the Orzhov afterlife Blood Artist decks. It will make Doomed Traveler terrifying. Even though that is an archetype I support in my drafting cube I still think Teysa is too narrow. Her floor is just too low and she needs too much going her way. A build around and little more. 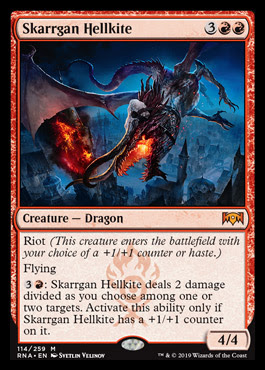 Nice design but sadly it is nice design that keeps it sensible and fair unlike Glorybringer! The options and utility Hellkite offers are nice but it lacks the raw burst and power of the existing premium red top end cards. Red is not overdone with ways to put counters on Hellkite so really it is a bad Stormbreath Dragon or a good Shivan Hellkite. Shivan Hellkite however is a terrible card and a good version of it is just OK. A five mana 5/5 flier that can Twin Bolt for 3R is medium. It is probably going to slowly win if not removed or immediately overrun. An option on a fairly quick threat or a meatier value card is nice, especially when both are fine for power and both do fairly distinct things. I will try this out but it just seems like no one is ever playing it instead of the existing cards. Options are nice but you can only forgo so much power for them. Options at the top end of the curve matter less than those lower down it too. 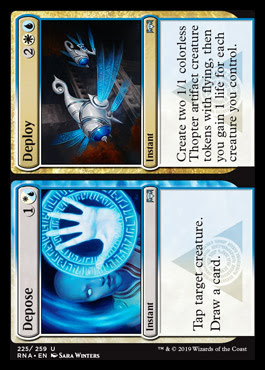 This is an outstanding little card. It has immense playability and versatility. While not as direct as Fire // Ice it is arguably more playable and more powerful. A cheap mode that cycles and works in either colour is lovely. Depose is not quite Ice however as you need a creature in play to cash it in, you can't just hit lands. This makes it a bit worse at pulling you out of a screw but still a decent card for doing so. Deploy is good on several fronts. Being an instant is huge for control decks looking to play this and makes it highly versatile. It can be a combat trick, planeswalker control, a fog, a lifegain card and it can do all this while waiting till the last minute for maximum surprise, safety and information. You can be sat back on Deploy and Cryptic Command and feel very good about things. I can't see this not making the cut in the majority of Azorius control builds. It just offers too much of a range of effects with a reasonable power level without any significant cost or drawback. Deploy even has scaling effects for even more brutal plays. Some red deck thinks they have you dead and aims all their burn at face and not your board and you play this gaining far more than just two life for a huge blowout. This card is so good I fully anticipate seeing it in most Azorius aggro and midrange builds too. It will likely be on theme with the flying tokens. It will really help with racing and again, comes at such a low cost for inclusion. With Dovin as well I anticipate some serious new Azorius or Esper aggressive skies decks jumping up the tier list in cube with the release of Ravnica Allegiance.