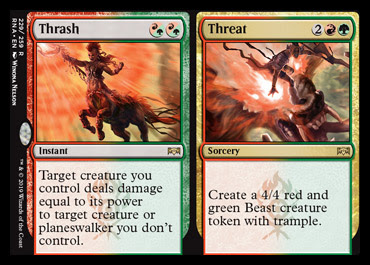 This reminds me a little of Ghor-Clan Rampager, a card that was highly impressive in cube although a little narrow in terms of archetypal homes. Threat // Thrash does a great job of improving on Rampager. Threat is doubly more playable as it is both a mono (green) card and a Gruul card while also not requiring you to be in combat. The effect is probably less brutal on Thrash than a bloodrushed Rampager but it is safer and less situational. Rampager would usually kill planeswalkers and it could also kill bigger creatures or kill creatures and do a bit of face damage. It could not however target a specific creature to kill nor neatly come out at EoT like a good removal spell. Neither Threat nor casting Rampager is great but it isn't bad either. It is on theme and never dead. Rampager is better in that department but as it is backup we are not too bothered. It is all really about the two mana mode and in that area Thrash seems superior even before we consider it being a mono green instant speed Dreadbore! Overall this card seems uninteresting for red and pretty big for green. Green having such poor removal options prior to this set means I don't really know where or if this is fitting in to green but it certainly is a new toy for the colour that should broaden horizons. 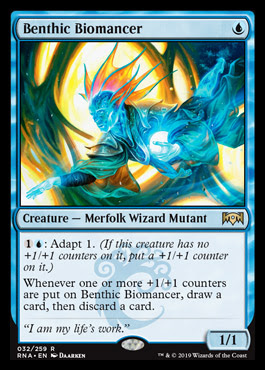 This is a big card. It will be a significant player in a number of decks. Firstly this is a premium one drop merfolk. All that tribe needed was more good one drops and it has an outstanding one right here. At this stage merfolk improves more with a card like this than it does with a new lord. This also has some impressive potential in +1/+1 counter themed decks. Getting a free loot whenever you counter this guy up really pushes some cards. A graft land becomes a looting land. Hadana's Climb takes on a bit of a Search for Azcanta element. Proliferate cards improve. Consume Essence gets pretty sweet! This has a lot of synergy across a number of good cards and potent archetypes. Paramount to all of this, the card is a solid stand alone and should just wind up seeing play in its own right rather than due to synergies. While a 3 mana 2/2 with a free loot sounds like a bad Champion of Wits that is missing the point rather. Joraga Treespeaker is a very good Fyndhorn Elder. Being able to pay three mana over turns one and two rather than on turn three makes an enormous difference to the potency of the card. In this case it is four extra damage in combat and a quicker loot. It can be done with just two lands meaning it is a huge help in finding land number 3 as opposed to the zero help Champion of Wits would be. Another perk of the split cost is simply leaving it till you want to use it, it is not like echo, you are not forced into paying all three of the total cost as soon as possible. The card this most reminds me of is Thraben Inspector. It isn't on the same power level nor is it so universally playable but it is that kind of card and has some advantages over Inspector. A 2/2 is a lot more useful than a 1/2 and there are also loads of graveyard synergies Biomancer will support a bit. 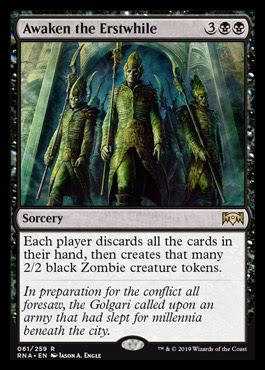 I'm not sure what the point of this is. It is balanced and symmetrical. If you Mind Twist them and hit nothing of your own you get beaten down with a huge army. If you make a huge army while they make nothing you have One With Nothing'd yourself. The only way to leverage this card is to have buffs so that your zombies are bigger, ideally also hasting. That all seems like a lot of risk and effort for a pretty minor payoff. This card is unusual so I am unwilling to fully rule it out but it does seem terrible. Like unplayable bad. Perhaps it is designed entirely for multiplayer but then that begs the question, why isn't it in the multiplayer products instead? 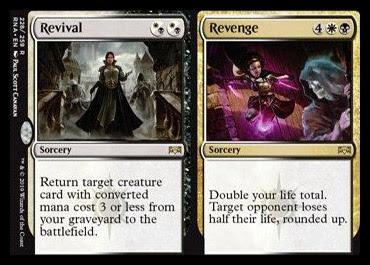 Sadly the cheap mode on this card is conditional. It gets decent late game but it will often do nothing useful or potent until turn four or later. It is also limited to decks with a decent cheap dork count. When you get back your choice of premium (two or) three drop for two mana it is nice but mostly it is clogging up your hand when you want early options. Black and white both have options that are better or at least more powerful than Revival. Revenge is pretty silly. It is a fairly big do nothing. When you are in trouble doubling a dwindling life total will not do much. Most of the time Revenge will not help your cause. It doesn't progress you towards a win, it just wastes a card and six mana. Sure, you might get a big life swing but that will just slow down your loss against players actually making threats and gaining card advantage. Revival is bad Unearth and Revenge is just bad. 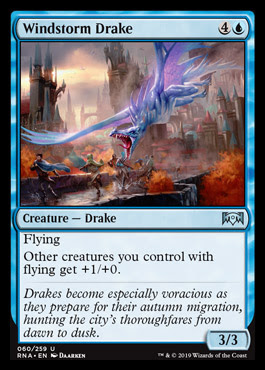 Much as I think a Favourable Winds deck is becoming good I can't see this card featuring in it for cube. Five drop lords need to be rather better than this. This will be pretty savage in booster draft and sealed though. It might even make an EDH skies list.

Bad Repluse is bad. This card is playable but you just don't need that many cards like it ever. Redundancy for Repulse isn't needed. Grip of the Roil is often better too with so many CitP effects in the game. 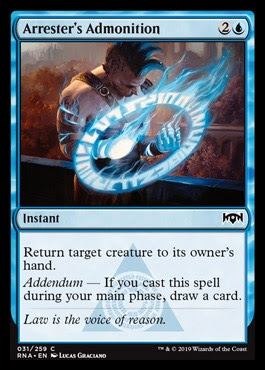 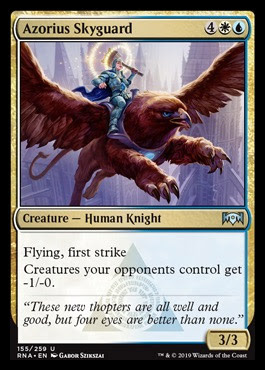 Play Cumber Stone and Dampening Pulse before this and play Architecht of Thought before that! This is too vulnerable and too expensive. I do at least like the general attempts in design to offset the power of the go wide strategies. A few more of those at cube power level like Architect would be lovely. 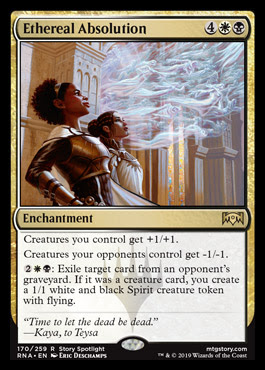 Yet another card that looks great as the sum of its parts but in practice is going to wildly underperform that expectation. This is two Glorious Anthems and a Night of Souls' Betrayal with the spirit factory tagged on. That is at least ten mana's worth of stuff but at six is it simply still way too late in the day. No deck wanting to handle weenies can wait till turn six, nor can a deck wishing to buff them. If you have to pay ten mana to disrupt a graveyard based creature you are too late. Far far too late.


Spirit of the Spires 1 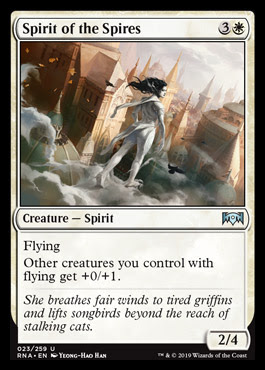 Probably too low powered and high up the curve but it isn't totally inconceivable that a skies or spirit deck might want a card like this. Often their dorks are flimsy and this will help against things like Thundermaw Hellkite and Plague Mare. This is so low powered for a card so high up the curve that I cannot really see this getting run without some good cost reduction effects that relate to it being available. Some kind of spirit Goblin Warchief... 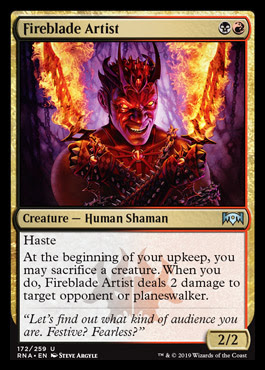 This is good but I don't think it does enough. The old hasty Bear is OK but it doesn't scale all that well. It is soft to removal and poor in combat. This will likely average little more than two face damage in combat per cast. Most of that when not made on curve will be the result of going wide and it not being that pressing to kill or block. The sacrifice outlet aspect is kind of awful. While it offers good returns and costs no mana it is locked down in regards timing and can only do so once per turn. It is a bit of OK reach but it entirely fails at doing what you want sac outlets to do. I think I just prefer Spike Jester to this. 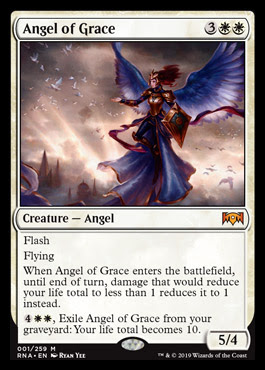 I think I will refer to this as Angel's Grace Angel because that is what it is. This card is three things but only two of them seem strong. I like a 5/4 flash flier quite a lot. Those elements are a big part of what makes Avacyn so good and even Restoration Angel. Just having a significant evasive threat you can deploy at instant speed is a huge deal for midrange and control decks. I also like a card that affords free value when it is in the bin. Six mana for a maximum gain of 9 life isn't an exciting return but it is low cost in other respects and lifegain a thing slower decks do want access to. In many ways it is better than lifelink as it is far less able to be disrupted. The bit of this card I don't much rate is the Angel's Grace bit. Being on 1 life isn't at all safe. Loads will kill you. A Lava Dart in the bin, a Walking Ballista in play, that sort of thing. You need to be gaining life rapidly and safely after going to 1 and that is an issue. This card needs to die to be of any help there and it is far from safe doing a six mana thing. It doesn't leave much room to do much else either. It might be good against a burn player who went all in but against a board of dorks you are just going to get beaten up again. In a midrange on midrange race the Angel's Grace trigger will win some games but it is hard to time well, still quite risky and on top of all that midrange decks don't find themselves racing all that often. It isn't a bad thing to have on the card, it certainly improves it but it feels like it is the least relevant part of the package for cube play. Overall this card is pretty fair for what five mana can do for you in cube. Despite that I think it is sufficiently well put together and on-theme that it will see a reasonable amount of play. It feels like it might be the card to finally oust Baneslayer Angel from the cube. This might even be good enough for aggressive decks to run. They care even less about all the lifegain and safety bits. They will just want it as a Thundermaw style card. When you EoT something it has some very haste like qualities. Mostly it gives your opponent minimal time to react. Five damage in the air without warning with a five power flying body backing that up is game breaking fairly often. While only partially comparable to any of these I  think that Angel of Grace fails to be better than Avacyn (the 5 mana one), Angel of Invention or Angel of Sanctions. While I think the card is good enough there is only so much room for five mana cards in any colour. Especially ones with such a significant overlap in attributes. It is a bit like green five mana planeswalkers, there are so many good ones you will likely wind up culling a couple of really strong cards that would easily be in the cube just on power level.